"What is a Skull?" Bionicle G2 Character Anatomy Theories

There have been debates recently on what a skull is to a Bionicle character. I would like to provide my answer to that question.

It has been confirmed by Ryder Windham that all life on Okoto is biomechanical, as in part organic and part robotic. I believe the anatomy of a Bionicle character would be something like this:

So with that, a skull would be the head part of the metal endoskeleton, which would also explain the bones that the Skull Villains have, along with their silver coloring. On top of that would be muscles and organs, and on top of that maybe some kind of skin and robotic armor or an exoskeleton.

I know this was kind of a dumb post, but I just wanted to share my thoughts. What are yours? How do you view the anatomy of Bionicle characters?

Although the fact that it’s confirmed it’s biomechanical annoys me to no end. I JUST WANT ORGANIC PEOPLES, AND NOT ROBOTS ;-;

Another theory, but It’s not like some disaster or event forced the people to evolve and gain mechanical parts while maintaining organic tissue

this is pretty much what I think too

This has always been on my mind for both generations: Where in the world does the organic tissue come from? It’s safe to say the metals used for the robot parts come from mines and such, but where on Bonkle earth do the great beings and whatever G2 has get the organic tissue from? Or how do they make it if they don’t get it from somewhere?

Great theories by the way.

But then what are the Skull villain masks? Where do they get them from?

From the skulls (metal endoskeleton head) of other dead animals/creatures?

Or are they hand-forged?

They appear to be either their exoskeleton, or some other creature’s endo/exoskeleton.

On the subject of skeletons, aren’t they spooky scary?

I feel that what you said:

is quite safe to assume.

But then what are the Skull villain masks?

Well, if you look closely in the animations, Skull Slicer and Skull Grinder definitely wore masks since they took their masks out before putting on other masks (MoJ and MoCr respectively). Still, the origin of their masks are unknown. Could it be that Makuta forged it anew somehow? Or did he make them beforehand?

In case of Skull Basher, he wore MoE directly on top of his “Bull Mask”. This showed that the “mask” is atually his face! Since it doesn’t look like normal faces and it really is his face, so either that is his skull, or he’s a different race with unique face.

And that extends to Skull Scorpio, as we saw that they had a “non-mask” faces and also showed no intention of wearing the stolen mask, so I’m assuming that were also their real skulls/faces and that they’re not capable of wearing masks.

Finally, the Skull Warriors. They never got their hands on any mask so we didn’t see what they would’ve done with it. Since they all shared the same “Skull Mask” with Skull Grinder, these are the possible scenarios I can think of:

Anyway, I imagine they have armor on the outside, organic inside with lungs and stuff, and a metal skeleton, and a biomechanical brain.

In G1, I assume they created it,

In G2, I assume Okoto’s inhabitants just have metal based bone structures rather than calcium based.

Where in the world does the organic tissue come from?

Well in G1, the Matoran were created by machines run by the Turaga. The organic material must have come from there, and prior to that the first batch of Matoran must have gotten recycled organic material from the Spherus Magnans.

I believe that in G2 the characters are more like the Agori, being mostly organic but then receiving robotic implants and armor later in life, which can be assumed considering that biological reproduction is pretty much confirmed by the concept of “sons and daughters”.

Good question, though, I never really considered that…

I’ve always thought of them along the same lines as your bullet points, the organic parts being muscle and organs. Of course, now that the Okotians have been confirmed to be biomechanical, I started thinking how they develop, since they obviously have offspring.

I think using the term “biomechanical” is slightly misleading-- their endoskeloton can be an organic metal that replaces calcium in life as we know it, instead of being “hightech”. Their organic bits would be very similar to ours, except maybe silicone -based.

just a little state ment here on the hole Skull villains having skull in their name, Skull Slicer had a mask, but so did Skull Grinder, i have this image to prove that he does have the same face as Skull Slicer (which could prove that the “skulls” that the skeletons wear are not real skulls, but masks that looks like skulls). 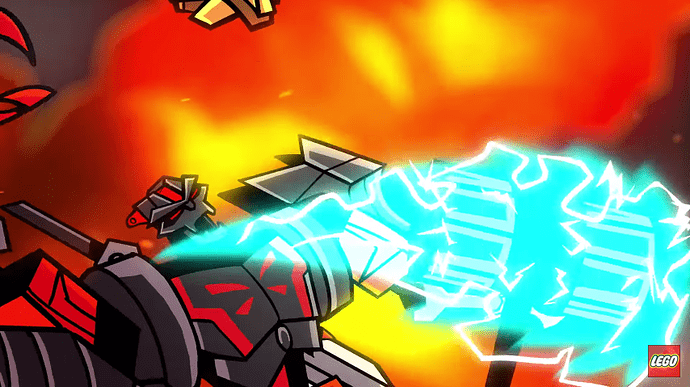 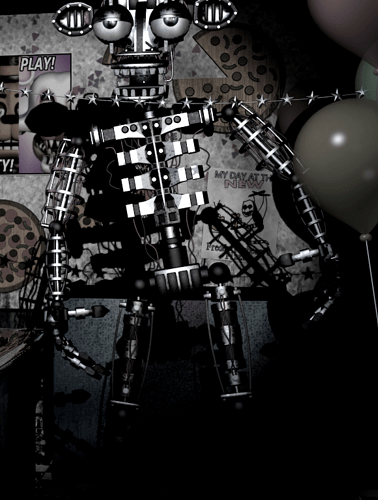 (which could prove that the “skulls” that the skeletons wear are not real skulls, but masks that looks like skulls).

Or maybe perhaps the Skull Masks they wear are carved from other skulls, so like a double skull. Their actual heads are their endoskeleton skulls and they are wearing another one on top as a mask. I believe some others said that as well…

From the skulls (metal endoskeleton head) of other dead animals/creatures?

They’re skulls. And Skull Grinder took one of their skull and make it his mask.

Looks like a cow crossed with a battle droid, two of the most nonthreatening things in the world,
Why do people like this again?
That’s a rhetorical question.

In the animations, which, if you didn’t notice, have some, artistic liberties taken when it comes to character design.