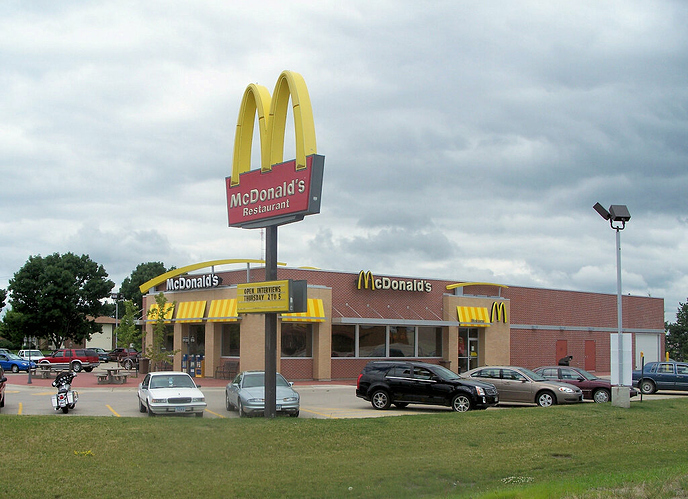 We’ve all been to some sort of terrible restaurant, wether it’s the servers, the bathrooms, the food or even the music.
And here’s the place to discuss those experiences!

P.S. The picture is for reference not as a opinion. everybody already knows McDonald’s is nasty.

My restaurant visits tend to be rather awkward.

Thing is that I suffer from sensory defensiveness (side effect to Asperger’s syndrome), resulting most foods tasting really bad for me. As such, I’m a very picky person, so trying to order foods without greens and other things gets… weird, depending on the restaurant. Same thing when I imagine what other people think of my plate’s… ‘richness’.

These days I also avoid my university’s restaurant. The current food provider (the restaurant’s outsourced to Sodexo) has time after time shown me that they’re bad at cooking potatoes and their choice of rice is terrible. Every time I tried the potatoes during the past six months, they were always cold and partially raw. And considering my ‘specific’ diet, I’d really appreciate of getting the basics right. =/

In schools and other facility restaurants here in Finland there’s actually a running gag of calling certain potatoes ‘kinders’ (after the chocolate egg), because they tend to have ‘surprises’ inside.

Probably the worst I’ve had is going to our local Moxie’s, and almost every other time, they forget about my group and I. They get us seated, take our drink orders, and then proceed to forget entirely about us. Even reminding them we exist doesn’t seem to work. It’s like we’re Bruce Willis Ghosts or something.

Another story is that, when I was a small child, my family would take me to White Spot when it opened in our town. Every time we would go, I would order a milkshake. And every time I had a milkshake, I would get violently ill. This, however, did not stop me from ordering a milkshake each time.
Instead of stopping me from getting milkshakes, my parents decided that we would just never go to White Spot again.

After going to see Iron Man 3, I went to Bojangles. Over here in North Carolina, Bojangles is a pretty well liked establishment.
When I went, however-

So I decided to never go back.

This is one of those topic where you’re supposed to say "I found ticks in my dipping sauce, isn’t it?

This is one of those topic where you’re supposed to say "I found ticks in my dipping sauce, isn’t it?

Naw, as long as your contributing to the topic then it’s all good.
Cough Cough

I remember a few weeks ago I went to this Mexican restaurant called Casa Vallarta. While the atmosphere of the place was quite nice, I wasn’t big on the food at all. The Taco- Burrito- Quesadilla dish I ordered was either covered in way too much cheese or way too much sauce. Presentation aside, that’s all I could seem to taste, and it didn’t help that the tortillas for my burrito and quesadilla were absolutely soggy from all the stuff on top. Really the only enjoyment I got out of my meal was the rice- after the first few bites of burrito it was just unpleasant. Maybe it was just the dish I ordered, but I remember my parents having the same thoughts afterwards.

Welp, I started this topic time to add to it:
A couple years back my family went to a Italian ice place called Rita’s. One of my siblings asked for either chocolate ice or chocolate gelato, to which they responded: “Are chocolate machine is broken but we can mix some chocolate syrup in it.” (Seems average right?) Well after everyone orders what they want, and we sit down. My dad looks at the receipt he realizes that they charged him 70¢ for the chocolate syrup. (I know not a huge deal but come on.)
Oh and apparently a friend of mine went to the cheesecake factory and they told him they were out of water. WATER.

As in they said that you didn’t order the food, or they actually wouldn’t give you your food?

I went to Red Robin one time, and this waitress wouldn’t give us our refill on fries or drinks, and it was my birthday so I was pretty disappointed. She basically rushed us out of there, not sure whether ot was busy or what.

Anyways my dad didn’t tip her as a sign to show how we thought of her service.

Once my family and I went to a place over in what I believe was North Dakota by the name of the “Astronomical Pancake House”. After waiting in moderately sized yet rapidly growing line, they lead us to our table, and went to go fetch the waiter.

Who never came. People who had been behind us in the line were getting their food. So we got up and left, without saying a word to the staff. Not to mention if you left the main dining area, you could see that the kitchen was dirty and unkempt, with the restrooms being in even worse condition.

I’ve had a couple of bad experiences with Restaurants:

Dennys at 2 am, our server ignored us most of the time and talked on her cell phone. We left her a frowny face in ketchup.

I think the meat wasn’t fully cooked at a Bamboo Hut.

When I was like, seven, we went to Applebees, and I threw up in the parking lot.

When I was like, seven, we went to Applebees, and I threw up in the parking lot.

Was this before or after the meal?

So there’s this taco place near where I live, where all the “hip” youth go. (The restaurant actually has VIP parking.) The only problem being, the food is extremely bland (to the point where whatever you eat it tastes the same.) One time I went there, they sat me right underneath a AC that was blasting cold air, not only could I not enjoy my bland food. I couldn’t stop shivering.

Was this before or after the meal?

Luckily, I made it out of the building in time.

You could’ve just gone to a washroom