Bionicle was a key foundation of my childhood and the comics LEGO and DC put out back in the day really helped garner my interest.

With the Bionicle community recently celebrating 20 years since the iconic LEGO theme debuted back in 2001 and after getting a feel for how the two previous Canon Contests went, I promised myself I would participate in the art portion of the Toa Hagah Canonization Contest.

Though I knew drawing Bionicle was a bit tricky simply because of all the details that the toys possess, having now drawn a whole team of Bionicle characters, I think I fully understand what the comic artists back in the day went through while staying on top of LEGO’s strict deadlines.

In fact, Bomonga alone taught me a lot about the intricacies of accurately drawing a Bionicle toy.

Anyway, my submission for the art portion of the third TTV Canon Contest was one of those illustrations that kept me seated at my drawing desk even during the recent event that was Hurricane Ida when I lost internet and later power.

Yeah, that is how much this Toa Hagah illustration meant to me that I kept working on it even when forces outside of my control tried to impede progress.

Even though the art submission period has been backed three weeks as of this post, I hope my determination, sweat, and worn-down drawing nib speak for themselves down below.

First things first, the process from start to finish.

Before I drew even one Bionicle piece, my first instinct was, after gathering more than enough Bionicle reference material individual pieces included, to draw basic human poses for the Toa Hagah.

This came about being inspired by a piece of Bionicle 2: Legends of Metru Nui trivia I discovered on IMDB a year ago when I found out during the concept art phase for the second home video Bionicle film, concept artist David Max used a basic female human body as a starting point to help conceptualize the look of Toa Metru Nokama while still making her look like a Bionicle character 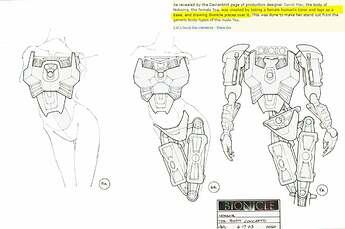 A trick I would suggest to anybody who wants to draw Bionicle in general.

That was the easiest part.

As I mentioned above, Bomonga alone taught me a lot about drawing Bionicle.

In fact, “Bomongus” as I call him in reference to the “Big Chungus” internet meme served as the acid test for the entire illustration.

So much so that the other five Toa Hagah went by much more smoothly only taking a couple of days at most.

Whereas Bomonga took well over a week from start to finish.

A mix of Carlos D’Anda’s “beefy” dynamic style and Leigh Gallagher’s impressive attention to detail was my goal.

For the background, Destral was the only choice seeing as how Norik happens to have a particular item in his bag that his team stole from the Makuta…

Moreover, I went into this illustration imagining the Toa Hagah team as though this was an advertisement from an alternate 2005 where all six Hagah were released by LEGO in toy stores everywhere.

Wanting to mimic the look of comic book pages before they get colored and with this piece being largely inspired by the artists who drew for Bionicle, this took me slightly out of my comfort style seeing as how I generally don’t do western comic book style art, but it was plenty fun filling in spots I wanted to ink with the bucket tool in Clip Studio Paint.

The colors and general vibe of this piece were the most time-intensive part of this piece taking a bit of inspiration from Stuart Sayger’s moodiness he brought to the “Ignition” Bionicle comics.

Even took a bit of inspiration from Issue 25 of the 2001-2005 from Randy Elliot’s run, one of my favorite Bionicle comics of all time!

First, credit to @Rothanak for his take on Gaaki’s mask which I ended up going with for my Hagah illustration.

Next, Pouks as you can see above went through two major changes from his winning canon model to how I portrayed him.

Since Toa of Stone characters tend to get a “meh” reception as is, his gunmetal gray armor color had to be changed to metallic blue since gunmetal gray looked bland on Pouks and just plain unnatural on Kualus imo.

As for his lackluster spear tip, I changed it to a three-pronged spear being more fitting for a Toa of Stone since “Po” tribes in the Matoran Universe tend to be renowned for being excellent carvers.

Plus, as a toy, you can easily imagine rock streams coming out from where the three blades meet which is just plain cool from the imaginative eyes of a child and the child in all of us adults as well.

And for anybody wondering why Bomonga has his weapon and shield sheathed, I reckoned he doesn’t really need them seeing as how his Kanohi power makes him the team’s resident “Giant-Man” i.e he is the weapon

This was a once-in-a-lifetime thing for me.

“A Light Shining in Darkness” captures everything that encapsulates Norik’s team of Toa Hagah for I feel they are the unsung Toa heroes of Bionicle.

The Toa Inika/Mahri took action when nobody else would even before they became Toa and Matoro as we all know made the ultimate sacrifice simply because it was the right thing to do.

Takanuva fulfilled his role in the eventual downfall of Makuta Teridax.

However, if the Toa Hagah hadn’t dared to rebel against the very group they were sworn to protect once Norik discovered their true insidious nature, the Bionicle universe wouldn’t have had its ray of hope against the Brotherhood of Makuta’s shadowy machinations at all.

I never expected anyone to use any of my mask designs in a contest, thanks!

A trick I would suggest to anybody who wants to draw Bionicle in general.

Really great advice! I have done that before but I keep forgetting that and getting stuck, I will need to try it again next drawing session!

Good reasoning behind the colours and Pouks redesign, as to this being once in a lifetime, true for these specific characters but at least we have a couple more years of contests in general.

Personally the 3 pronged spear tip is a bit small and the bodies are quite skinny compared to your human trace references but I suppose that is to make it more accurate to the sets. Good luck in the polls!

Great job!
I love the particular style you used, and also the fact that you can just see the Avohkii poking out of Norik’s bag.