Ronin was cool, and I liked the interactions between him and Nat, especially before Nat’s death. Also, fat Thor is amazing. Scott was a little too sciencey for me. I loved Professor Hulk… especially his ‘smashing’ scene when they go back to the battle of new york. Seeing Loki again made my day. I didn’t really like the way they portayed the whole thanos finding out what was gonna happen via the two nebulas thing, but then again, there really wasn’t any other way to do it without confusing the people. I feel like the quantum realm should have been explored a little more, especially when figuring out how to travel back in time. I teared up at Tony’s death, but I didn’t actually cry… and Rescue is now officially MCU. Hooray! I also loved seeing Spidey back, and although his time was short, it was well done. I hated at how little Captain marvel actually was in the movie… she could have killed thanos instantly. Didn’t she just blow up his warship?I mean, come on. I also did like, however, how Tony said, “I am Iron Man” and then he snapped. I think that was a really cool moment. Another one was when cap was fighting cap, and the past one said “I could do this all day.” and future cap was like, " I know!" Also, when he said “Avengers, assemble”, that just made my day.

I saw it the other day

The fights were cool, I liked when they said avengers assemble

Everything I’d say has been said by meepinater, Michael or mctoran

If you haven’t seen it, watch it now

When will the movie leave theatres? It’s already been almost a mouth since it’s relase. I am courious if it still will beat Avatar or not. How much money did it make up to this point?

To your point about Captain Marvel:

[spoiler]As I like to brag about, after seeing her movie, I had no doubt that she would be utterly demolished by Thanos. She had the power of one of the Stones, while Thanos had six. While the fact that he never really used them surprised me, but I was still right, though my reasoning was off.

I think of the reasoning primarily being that Captain Marvel is much better off of her feet than on. In space, she can wreck face, but on the ground, her power is pretty much limited to laser blasts. As we saw in her movie, she blows up spaceships by literally punching through the insides, randomly and without direction. She just charges through, and blows in up. On the ground, however, she would be aiming for a very precise location, on that could end up with an explosion that could kill her teammates. And then, this target happens to be able to move, deflect, dodge, and block unlike a spaceship, making it so much harder for her to hit. Finally, she has to charge her punch some, making it easier for a foe to predict. I don’t remember if she ever tried punching Thanos, but if she did, he clearly didn’t get stopped by it.[/spoiler]

When will the movie leave theatres? It’s already been almost a mouth since it’s relase. I am courious if it still will beat Avatar or not. How much money did it make up to this point?

Only in domestic growth. 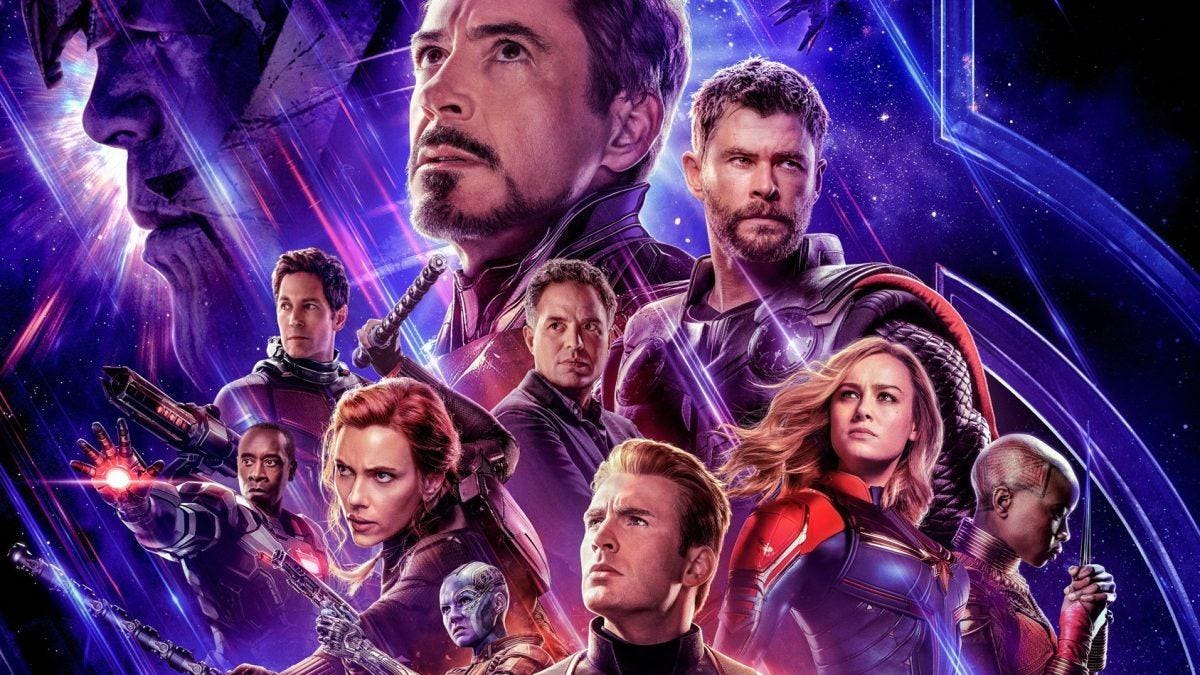 Competition from "Detective Pikachu" and "John Wick 3" has taken the likelihood of "Avengers 4" passing "Avatar" from "probably" to "too close to call." 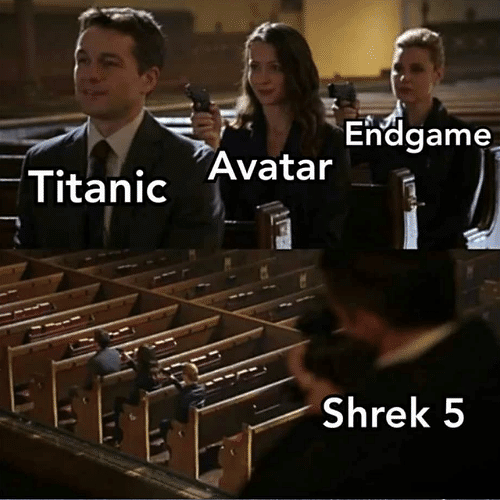 All jokes aside, I really enjoyed the movie and highly recommend it, and while it may not have made as much as Avatar it will probably have a larger cult following 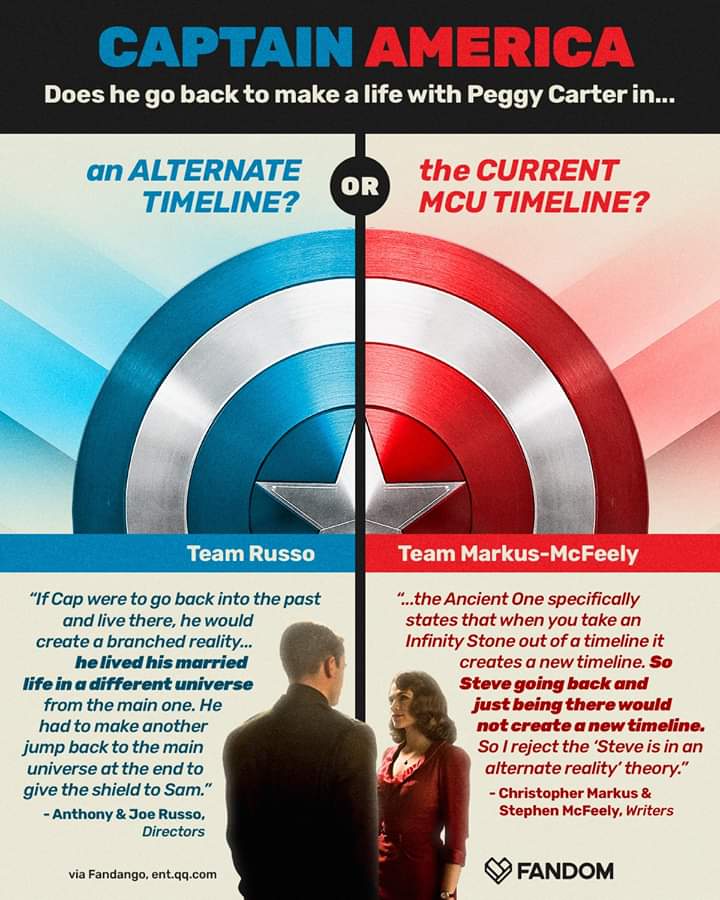 So… yeah. Pick your side of theory.

I am on the Markul/McFeely teem.
Definetely because it is red like Iron Man’s team back in Civil War.

####I’m on Team Who Gives a Crap because either way you want to explain it, it was visually and narratively more important and interesting that an old man suddenly appear on a bench instead of on a time machine table.

I can see how the way they wrote the screenplay supports their theory, but the rest of the logic of the movie would support the directors. The conversation with Hulk and the Ancient One never directly said that the alternate realities cease to exist, it seemed more clear watching it the second time that returning the stone was in order to prevent the timeline from any future dangers. Bruce tells Cap to go back to close the NASTY alternate realities. I don’t think that ever meant all of them cease to exist, but just that they won’t be doomed without the stone being in their reality anymore.

Also, Bruce says going back to the past doesn’t change the future. Wherever you go, that’s your new present. Steve would be altering his past (and thus, future) if he somehow traveled back in the prime timeline and not an alternate reality.

And Cap and Tony went to Jersey without a machine, so it can obviously happen somehow…

I honestly don’t mind either way.

Also, Bruce says going back to the past doesn’t change the future. Wherever you go, that’s your new present. Steve would be altering his past (and thus, future) if he somehow traveled back in the prime timeline and not an alternate reality.

He wouldn’t, actually. That’s the whole point of Bruce’s statement–there’s no “somehow” of going back and altering the past and thus your future, because going back and changing something creates an alternate reality no matter what. You can’t travel back in time, change something, and still be in the Prime Timeline.

So Markus and McFeely actually can’t be right about where he is, because it’s established in the movie that any change unaltered by returning the Infinity Stones creates a new timeline.

We may actually be on the same page here, but I just thought I’d point that out

Ya my point is that if he goes back in the prime timeline, it’s contradictory to what was said in the movie

Exactly. I’m surprised the script-writers didn’t pick up on that…unless they’re asserting that Steve being Peggy’s “mystery husband” was a thing all along, but that contradicts a number of stated facts from the previous Captain America movies, most notably the pictures of Peggy’s family in Winter Soldier.

The MCU Wiki treats the Russos’ explanation as a definitive answer, so I’m going to stick with that.

Who is the monster who cut this out of tge movie?

I’m actually okay with this scene not being in the final film. The kneeling motif seems a little on-the-nose to me, and it kind of cuts into the solemnity of the moment, taking our attention off of Tony for too long. Plus, what with the funeral scene coming directly afterward, it’s rather redundant, since the funeral scene was always in the film, and accomplishes this scene’s exact intention in a much more effective way (in my opinion, of course). That’s not to say it’s a bad scene, just unnecessary…

Who is the monster who cut this out of tge movie?

I kind of agree with @Toa_Heatwave. I can’t really imagine the Avengers kneeling to someone, even who just made a sacrifice, like Tony. I mean, they’ve all at least tried to do it before, it’s kind of their job.

Also, anyone else realize that Iron Man has tried to die in every Avengers movie, and has finally succeeded in Endgame?