So, as you may recall from the Void’s topic (seriously, read it first for the context), the Void is designed to consume reality, and thus its Voidal denizens are also gifted this ability.

Of course for them it’s quite as simple as being able to absorb material converted into Voidal matter/energy, or just eating whatever they can fit in their gobs. But for Bio, well, he works a bit differently.

Bio’s a fairly unique existence amongst the Void beings.

An entity who awoke as a perfectly stabilized Void Lord.
Who came with an A.I. companion of sorts built with some understanding of the Void/the sensors needed to detect its energy.
Who is composed of literal Voidal-energy, turned semi-physica/gaseous, and contained within a suit of armour.
Who can create portals out of, and back into the Void with ease and no damage to the connecting reality.
Who Can strengthen weak-spots, seal tears, control, and even manipulate the Void’s energy and laws of reality with an ease that took many Void Lord’s eons (in Voidal time) to accomplish.
Who can both last far longer outside of the Void without need to return compared to all but some of the strongest of Void Lords, and who’s body can semi-stabilize to the universe it is in, and then adapt/convert itself into a more organic form.

But due to this he does carry numerous different weaknesses, drawbacks, and… differences to his ‘fellow’ Void brethren. One such difference is his ability to ‘consume’, something a tad difficult to do when your normal form doesn’t have a mouth, and your alternate one’s not really made to work in that specific way.
Of course, the Void always supplies, and it’s already known to be far from a natural place, so why would its gift have been even more so? 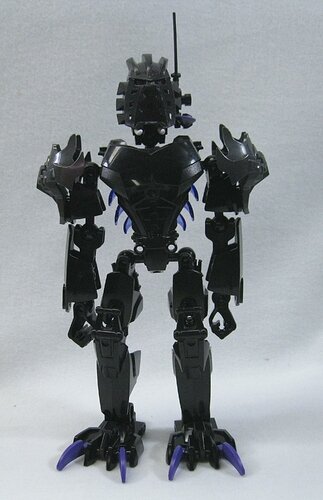 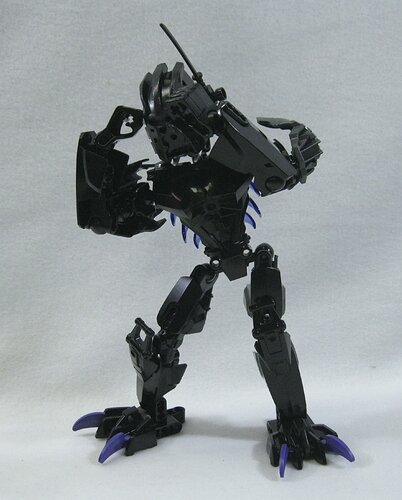 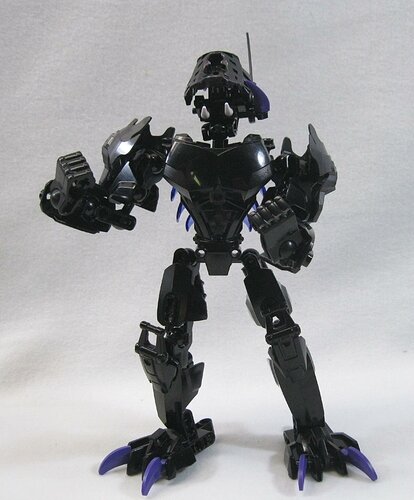 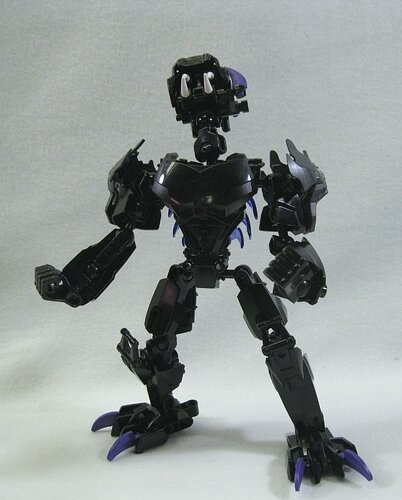 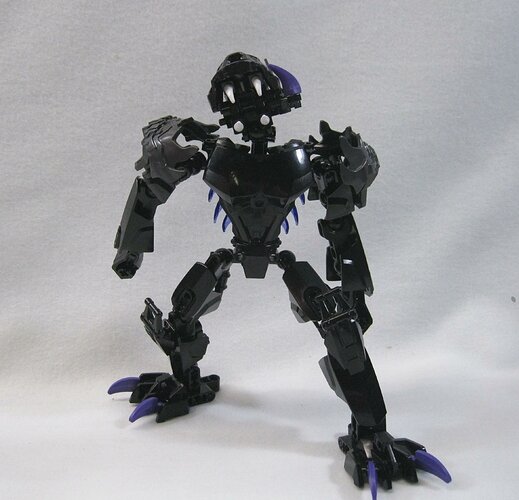 And there it is, the Void’s ‘gift’ to Bio, a maw of unnatural make, with the ability to quite literally consume anything, and… made to fit into his form.

Also, let’s just say when he first learned of it, well, the instincts that triggered it, and were triggered with it were far from kind.
More traumatizing really.

And so there you have it, the most eldritch/body-horror esque maw/function I probably could’ve possibly made for a character! A giant, fanged mouth, (and in a drawn/animated look it would have many, many more teeth than it can in its Moc form,) that literally requires its owners face to ■■■■■ around, and slide up to be revealed!

Here, have some close ups! 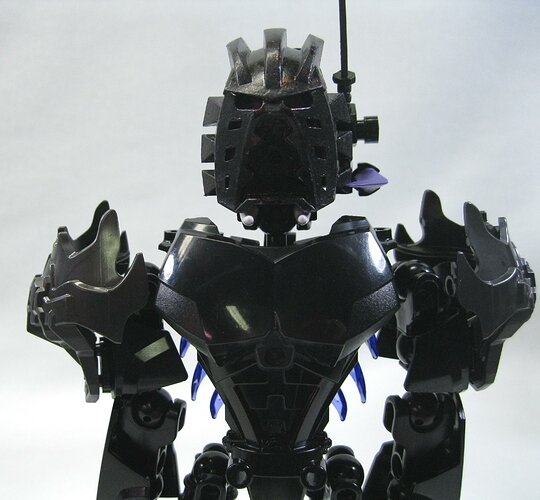 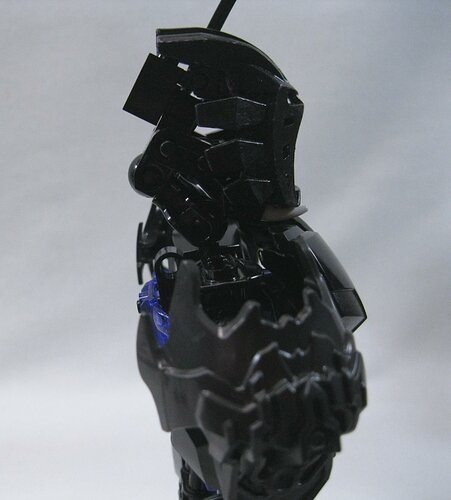 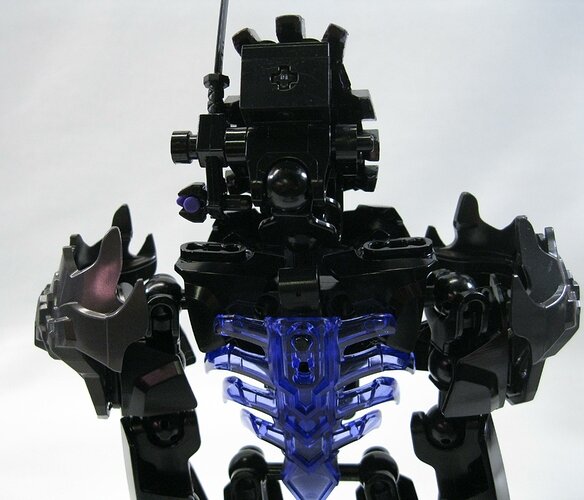 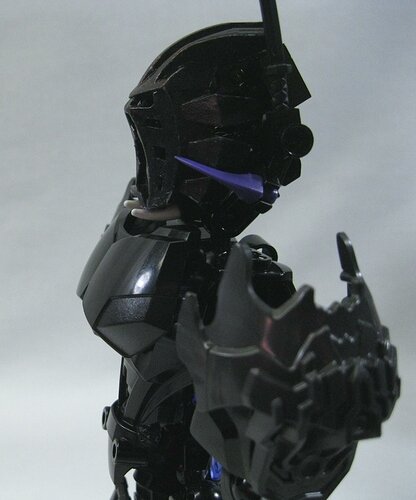 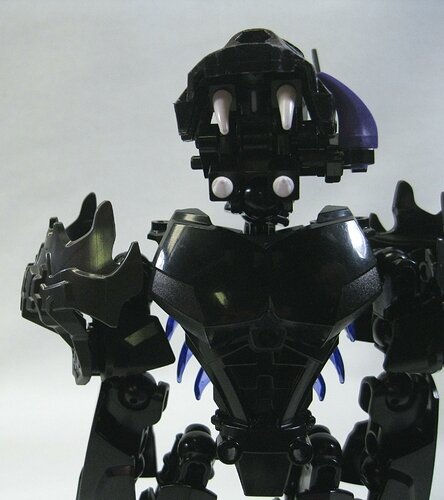 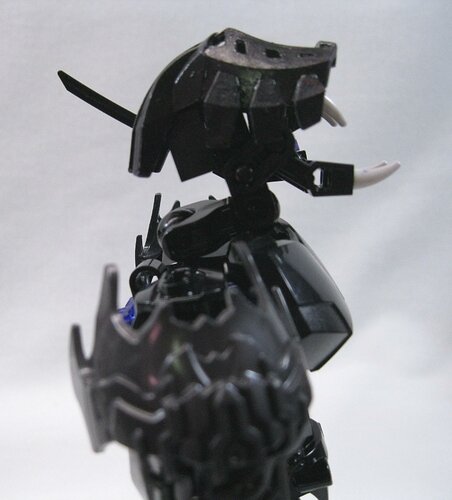 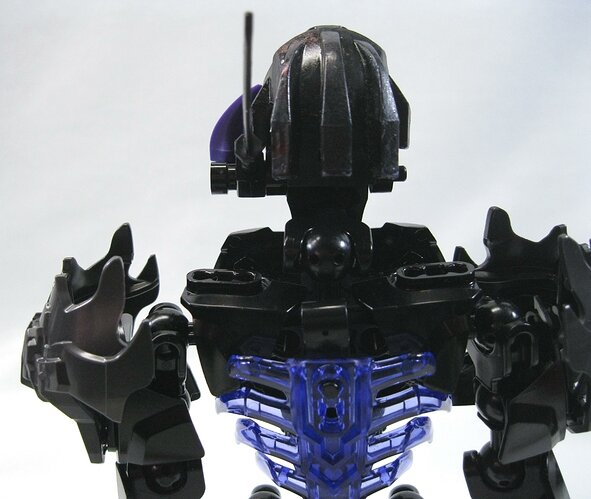 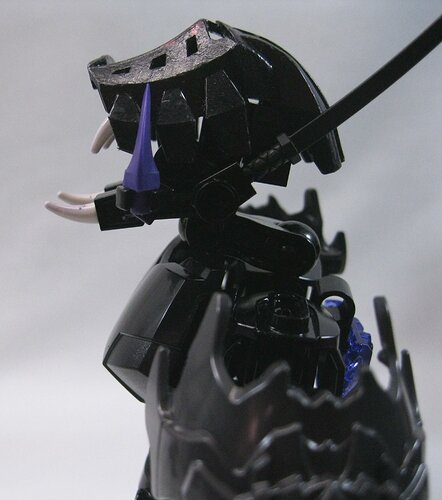 Have some more! But this time of the internal structure! 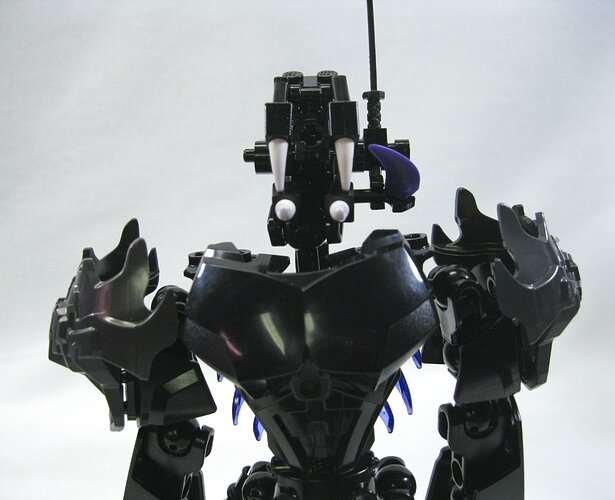 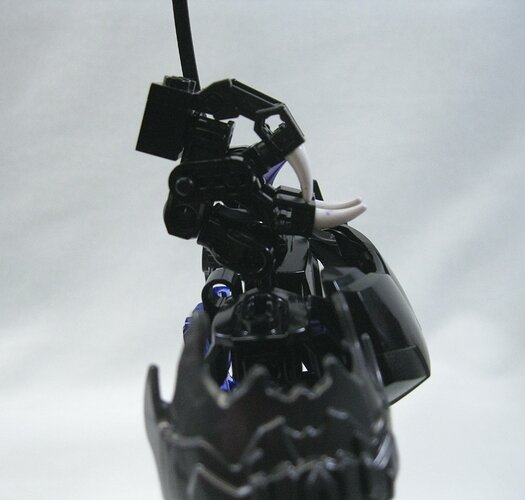 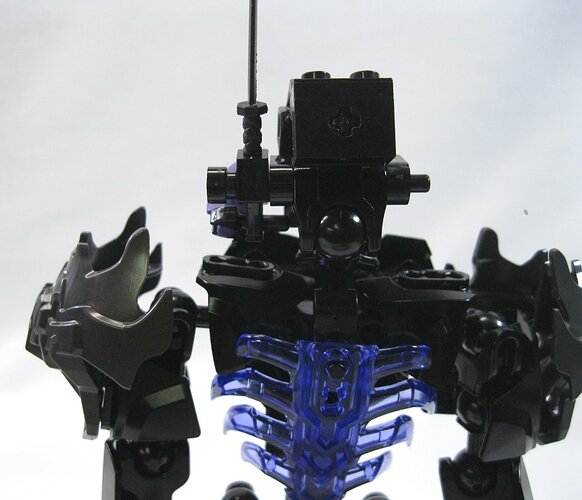 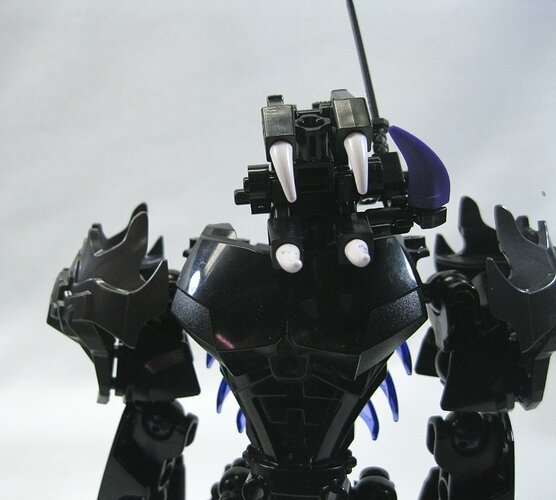 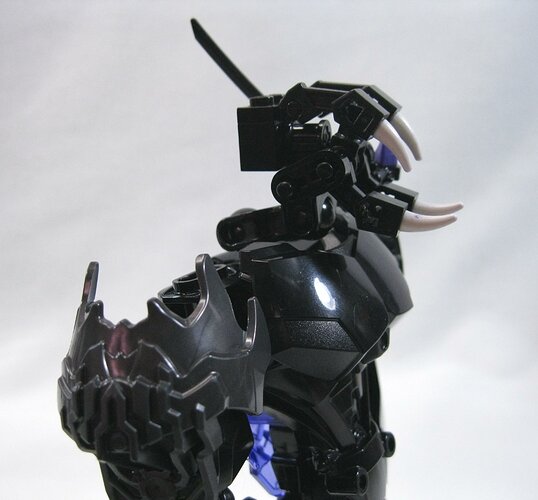 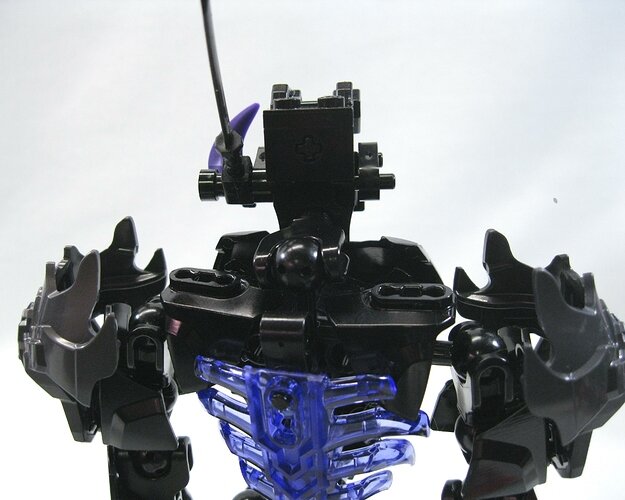 Also! A second update to the update! 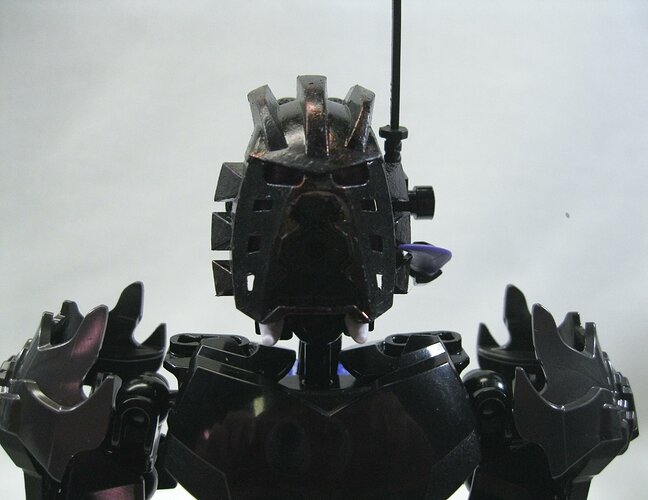 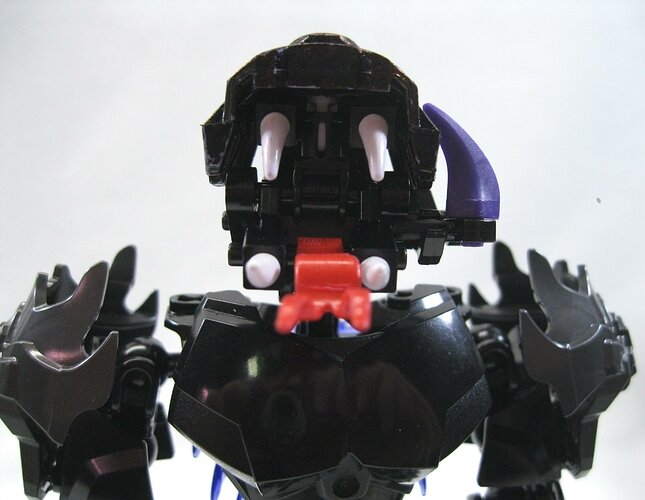 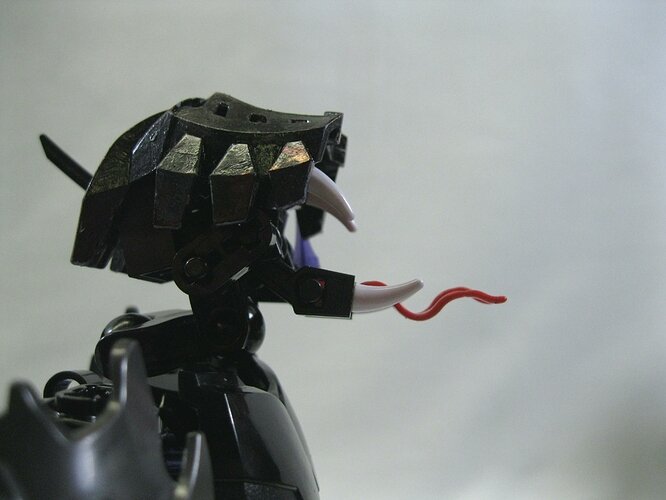 HE HAS A FRIG-A-FRACKIN’ TONGUE! YEAH!

Touch fiddly and all of course, and did take some part modification, but was it ever worth it!

Quick little thing, anyone want a how-to that’s more in-depth than the internal pics just let me know, and I’ll get one out.

Also, small… ‘warning’. I have absolutely no idea if this will work with any mask besides the Avohkii. Might just take some additional fiddling and all, but if it doesn’t, sorry about that mates.
#----------

And once again another shout out of thanks to @ThatchMac! 'Cause mate, well, if it hand’t been for you I never would’ve made this character of mine I’ve come to become so invested in!

So thank you once more for everything you’ve done, the series you’re running, the characters you’ve shown, the story you’ve made, and even the people you’ve befriended/worked with!

The inspiration it all gave me towards Bio has been immense, and I am so, so happy for it!

That looks pretty cool, reminds me a lot of venom.

Haha! I actually didn’t think of that comparison until you pointed it out! Nice!

He looks kinda cool, but it’s hard to make out anything specific; there’s just so much black. Maybe a bit more direct lighting would help, but really I just feel it could use some more color.

I… you talking about the internal pics, or all of them? I was a bit worried about the former, but I figured the rest were bright enough to make out the,well, update to his head, especially with all the close up angles.

Particularly the final three. Those are the brightest, and closest of the pics. I can literally see the internal structure in the second.

I mean, I can definitely make out the maw. It’s just that with everything being the same color, and that color being the darkest color in existence, making the entire MOC out of that color makes it hard to make out details.

Ok, uh… I’ll see what I can do then. Any specific pics/angles you want brightened? Or you just happy with a basic view of what the Maw, well, looks like?

Yo, @jayzor17, the pics better now? Upped their brightness a bit.

Nice build and backstory!
I can see you’ve put a lot of effort into it. The concept of the mouth under the mask is pretty darn cool!

Ey, thanks mate, and ja. Been working on this for a while now.

And boy-oh-boy was that mouth difficult to build/integrate, but oh-so worth it!

This looks exactly like venom to me, weird you never thought of it. It’s pretty nice.

I guess I just really wasn’t thinking of him when designing this/coming up with the idea.

More eldritch abominations, and how to incorporate body horror-esque elements into Moc form running through it really.

Huh, how did I not check out the void stuff before, the head/eldritch mouth thing is awesome.

Ey, glad to hear I’ve managed to impress you enough that you decided to give my Voidal stuff a look!

Tryin’ to make a duo of Voidlings right now, not gonna have Bio’s mouth ('cause I do not have enough of the pieces need to try that again), but they’ll be… odd enough looking so long as I can finally find these pieces I need. So hey, maybe you’ll like 'em too!

Either way, thanks, mate!

I give it two tongues up.

While most of the build is rather bland, it is more than made up for by that creative head… function? feature? Hmm not sure the right term.

While most of the build is rather bland, it is more than made up for by that creative head… function? feature? Hmm not sure the right term.

Ey, thanks mate! Was partially the reason behind why I gave him such. Figured he needed something to… spice up his build while I’m forced to keep it as bland as it currently is, and also to better show the… unnaturalness try to describe… have others envision when it comes to the Voidal species.

Be they unique, such as Bio, or not.

This is something LEGO should’ve tried with G1, seriously dude this was a cool idea. I love it!