I now present to you Kaihanga Nui! (The Great Maker) to enter into the contest.

Entry Photo: (please go off of this when voting.) 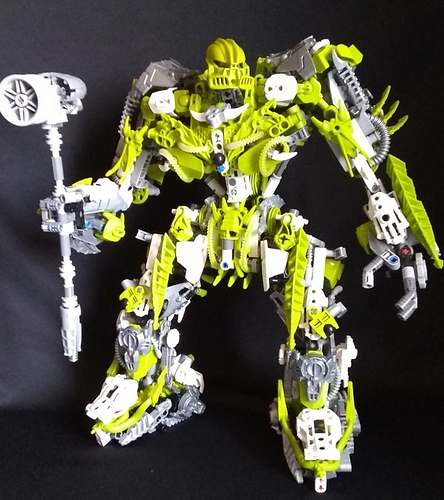 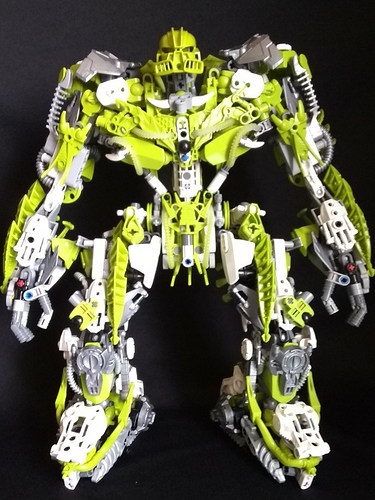 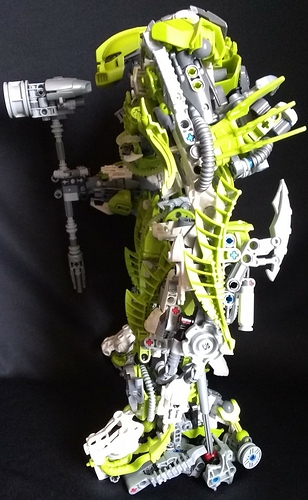 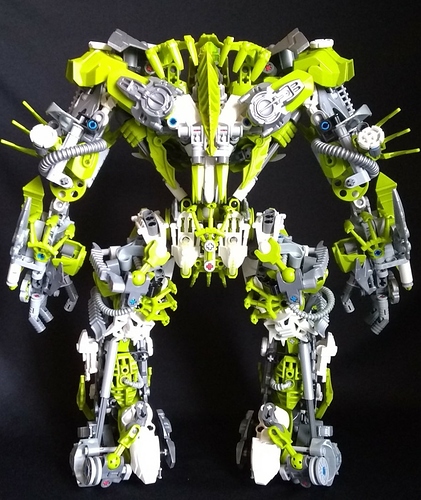 For starters, his large build was inspired by various descriptions of him, mainly how “his stance made it clear that he was equal if not superior” to the most powerful beings in the Matoran Universe.

His complex design is based around certain elements of some of his vehicle creations (the Axalara, the Rockoh, and the Jetrax) along with my usual building style, and his varied textures are supposed to represent the “ancient runes” that he has been said to have had throughout his armor.

Artakha raising his hand in proclamation: 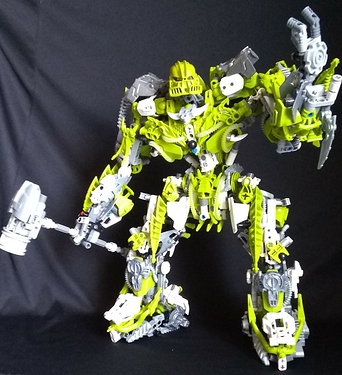 Now to focus on each of his parts respectively.

His torso was primarily inspired by the Toa Mata, the reason is because he was the one who created the Toa Mata, same goes for his vehicles that I mentioned earlier, I figure if he named his realm after himself why not have it that he designed his creations after his figure?

I also took inspiration from the Great Spirit Robot, that came from how some thought that he was actually Mata Nui in the story, and the Mata torso was similar enough to his that I decided to put they’re designs together to make what you now see before you.

The forearms are intended to represent the Three Virtues, something which I tried to show while still making it cohesive with the rest of the MOC. 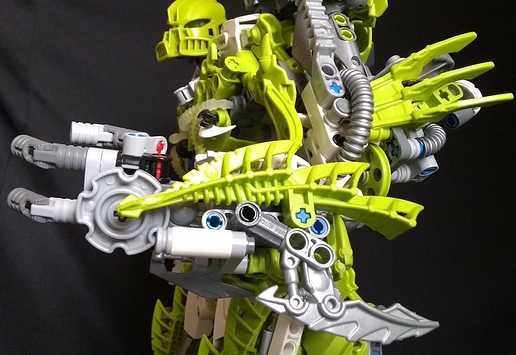 The legs were made in contrast to his brother Karzahni’s who, in his original form before he was mutated, had rather short supports, therefore this Artakha’s are giant in comparison not only to create this opposition, but also to add to his all-powerful appearance.

And finally his Forging Hammer was designed for practical usage, with a heavy counterweight on the back for a balanced swing, and a flat head perfect for getting a precise shape by the end of the forging process.

Now on to the breakdown photos. 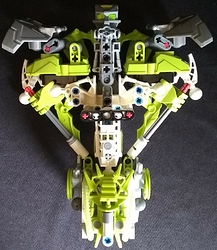 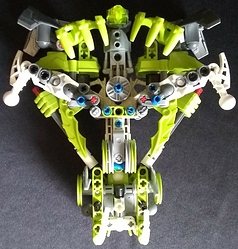 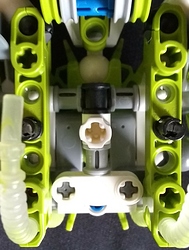 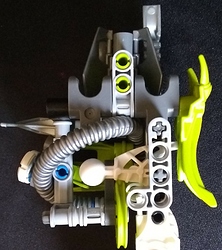 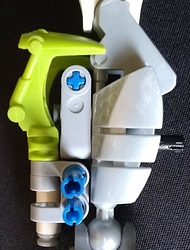 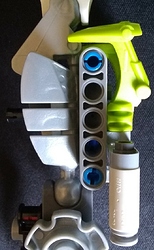 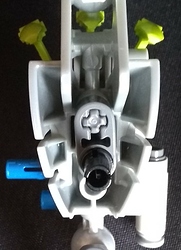 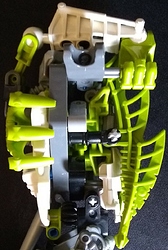 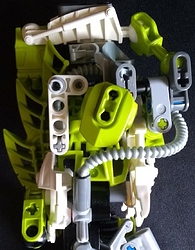 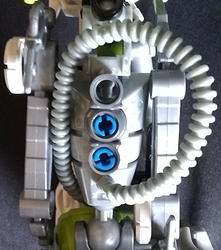 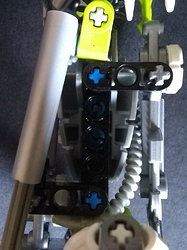 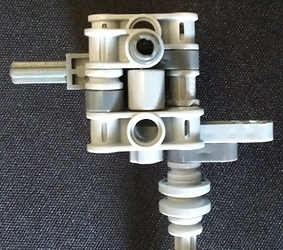 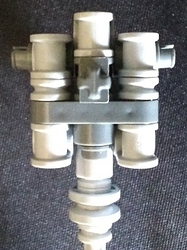 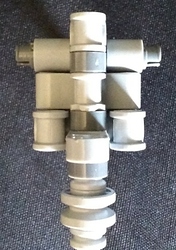 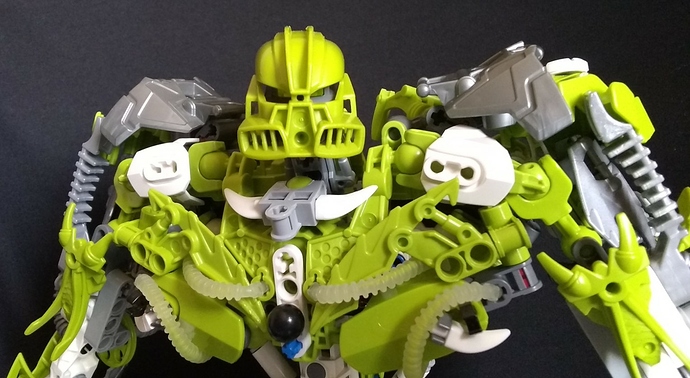 Best of luck to all my competitors and may the true Artakha step forth!

r/chonkers called, they need you back.

XD. Excellent MOC. Really like the white and green colorscheme, nice take. In sand green I think it would be great. Good luck!

this is what I personally want Artakha to look like, is this how you envisioned him?

it reminds me more of a Dark Hunter than Artakha personally. As a skilled creator, I expect his armor to look a lot more ornate and organized, not partspam.

Excellent MOC. Really like the white and green colorscheme, nice take. In sand green I think it would be great.

Thanks! I’m surprised that no one else has done it yet.

That is, until you get to the waistline.

I’m sure this is going to be the largest entry to the contest, I like it. Welcome to Bufftakha’s Gym!

Yeah, then he skinny. I also really like the color scheme!

press f for those lime joints

I’m sure this is going to be the largest entry to the contest, I like it. Welcome to Bufftakha’s Gym!

Thanks for the membership card,

as for the size, we shall see I suppose.

Thank you very much!

press f for those lime joints

He ain’t fat. My friend, what you see is over 300 lbs of pure unrestrained muscles.

Amazing build. Not for a half second what I would consider Artakha or even resembling him, but a really cool build.

I applaud you for making a forging hammer (as it should be), instead of an oversized weapon!

This one is… a lot to take in. My eyes kind of hurt. I’m sure it would look better in sand green, but not enough to get my vote. As others have said, ornate =/= part spam.

I applaud you for making a forging hammer (as it should be), instead of an oversized weapon!

I mean, since it is just a forging hammer it should be about this size in my opinion.

And as a note to future repliers, please stop saying “part-spam”, I put a lot of effort into making this in the past five days and I don’t like people saying it looks like I just made a junk monster of a MOC, it seems very rude and I ask you please to at least use a different, more kindly gesture than the equivalent of “your MOC looks like a piece of trash to me”.

Agreed. Lets all have fun with this contest! Everyone’s MOC’s got something cool goin’ for it!

Well I doubt people are going to read the whole thread before commenting, but I’ll try to explain what I mean by ‘partspam’.

With most constraction sets, there are one or two textures across the build. The Toa Mata had the prominent gears and piston elements, the Nuva had their smooth armor. The Piraka had spiky bits and the Barraki tended to have smooth, alien armor. This MOC mixes and matches disparate textures from several lines - CCBS shells, more detailed CCBS pieces, Inika armor, spiky blade pieces, and specific plant-themed armor pieces, as well as tubes and pistons. All of them all over the MOC without enough of any particular one to unify the build. It looks as if you were using any and every piece you had in his colors, no matter what line it came from or how it meshes with other parts of him, in order to have the amount of bulk you wanted at his height requirement.

To an extent this isn’t your fault, the height requirement is a part of the challenge, as is the single shade of green, so having disparate themes within that one shade of green can be forgiven. But the textural sins are repeated with the white pieces and the silver(s). The end result is that, while his size and form are impressive, on closer inspection is had no theme or visual flavor; just there to fill a gap. Compounding this are the fact that not all the gaps are filled, most notably the hips, with only the green hand pieces sitting where there should be a rounded transition between the legs and torso, and the fact that the shoulders and hips are about the same height, where for all other BIONICLE characters (with a few obvious exceptions) and most humanoids the shoulders are wider enough to let the arms fall naturally.

I’m sure it’ll come off as harsh, but hopefully now you understand where my distaste for this interpretation comes from, and understand a little about how to avert its issues in the future.

With most constraction sets, there are one or two textures across the build. The Toa Mata had the prominent gears and piston elements, the Nuva had their smooth armor.

But don’t the nuva then have three textures because the mata have two and then you add the smooth one?

Not the best example, but most of the gears get hidden by the armor, and the pistons are less prominent.

Well besides, this is kind of my building style for most of my MOCs, and I’m not going to change it, at least not to much, I hope you understand.