Bionicle movie lines that sound better in other languages

So I think everyone is aware that some of the dialoge in the Miramax trilogy is not the greatest (but I don’t mind).
However I cannot be the only one who first saw the movies dubbed in some other language and later found out that some of the lines differ significantly in the original english.

There is one particular qoute in Mask of Light that always sticks out to me. This one is delivered by Takanuva in response to Makuta just before their match:

Makuta: “When you lose, I’ll have that mask.”
Takanuva: “I will not lose.”

The line is rather bland and Takanuva’s delivery is very mechanical.
But when I take the version I originally watched, the dubbed lines translate to:

Makuta: “When you lose, I’ll have that mask.”
Takanuva: "Forget about the mask, I’m not losing!

So my question to you is: Are there any lines in any of the movies that you find ackward in english, but better in other languages?

Can’t say that I’ve watched the films in other dubs to find out, but this is a really neat find!

This alternate version of the line does indeed sound much more like Takua!

If you don’t mind my asking, what language was the modified quote from? Or is it like that in a number of the non-English dubs?

I don’t know about the other languages, but this one is from czech dub.

This alternate version of the does indeed sound much more like Takua!

I know right! For years that has been my norm, so once I watched the english version for the first time, it was quite jarring having it reduced to “I-will-not-lose.”

The galaxy-brain play here is to watch the movie in Maori and find out.

Well I didn’t remember particular differences in French, but I must say the French dub of Makuta was always my favourite, compared to German and English. His voice was less brutish, more deceptive, a better representation of Makuta as an intelligent manipulative evil than an aggressive brute.

Tbh I thought the same way about German LoMN Makuta. (In Germany there were two voice actors who played Makuta)

You mean two voice actors changed between the movies, or did they provide voice at the same time - a sort of mixed voice?

His voice was less brutish, more deceptive, a better representation of Makuta as an intelligent manipulative evil than an aggressive brute.

Between the movies. The first in MoL went more with the ancient evil route.

So I watched Makuta scenes of both movies in German (I only watched the German version of MoL) and you are right, the tone in LoM sounds more deceptive and manipulative. Kinda nice they changed that, even though fairly inconsistent I think.

And I just realized that they did the same in French like in German. Only that in French, the VA is the same, but with different voice edits

An extra difference that comes to my mind is the legendary line from Web of Shadows: “The Key to Nongu?”
I am curious how this was dealt with in different languages, as it cannot be changed arbitrarily. It should rhyme with Keetongu for Onewa to mishear it.
In the czech dub, this was changed to: “Kid of Ongu?”

Mind you, I didn’t translate this - this english form was actually used in the final dub. It begs a question why this was changed at all, when the language was kept for this line…

Perhaps they thought that young non-english speaking audience would be more familiar with “kid” as oposed to “key”?

How is this line handled in German and French?

I think German: who plays bongo?
Double checked it: it’s really “What? Who plays Bongo?”

If I remember it correctly, in Russian it was: “a whale’s leg?”

No kidding, in Russian it rhymes with “Keetongu” really well!

Feel free to post any more variations on Key to Nongu!

And don’t forget to also post any dialoge that you think was improved in a certain dub. I am interested!

In Polish dub the Keetongu line was changed to “Jaki King Kongu?”, which means “What King Kongu?”… at least that’s what it was changed to according to BS01. I always heard it as “Kiekongu”, which is just a funny misspelling of Keetongu.

As for the question in the OP, I’d say the whole Polish dub overall. Mask of Light was a big part of my childhood (and what got me into the series actually) and I always thought it holds up pretty well even to this day. That’s why I was very surprised when I heard people complaining about the dialogue or voice acting in the movie. That was until I heard the original English dub and well… I can only say I feel sorry for you guys.

This is one of the rare instances where the Polish dub is much better than the original (and that happens very rarely, almost never). Whoever was in charge of the translation did a pretty good job, the dialogues in the Polish version are filled with fancier, more literary words than what your typical translation would be, which added to the mystical feel of the movie, something I feel the original version kinda lacked. That certainly wasn’t necessary, but I welcome this change - it made the characters sound like they’re from some sort of fantasy novel, which, again, in my opinion fit the otherworldy adventure much better.

But not only that, the voice acting in general sounds much better in the dub. In the original, I thought some actors sound really stiff or just really uninterested in the movie, whereas the line delivery in the dub sounds much more emotional. At least in some scenes. I also find the choice of voice actors much more fitting - most notably, Jaller and Takua sounds like actual full-grown characters, not kids.

And the Makuta voice… Gosh, I was really surprised to hear how different and underwhelming the original voice is compared to the one I used to grow up with. Tell you what, Makuta’s voice scared the ■■■■ out of me when I was a kid - it was deep, distorted by filters, much more menacing compared to the calmer, more distant voice in the English version. It did give the character a whole different feel and some people may not be fans of that, but I personally dig it a lot. 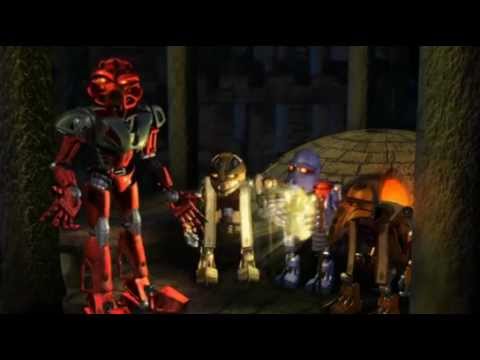 As for the line changes… Well, as I already said, a lot of them use fancier wording compared to the original, and I don’t know the whole English version by heart so I didn’t really compare all of it, but there are some differences that stood out for me.

I really like the exchange between Tahu and Gali on the Kolhii Stadium. In the original it goes:

Gali: “I think my brother is afraid of having his fire extinguished.”
Tahu: “Sister, against me you’d be nothing but steam - hot air, as they say.”

But in the Polish dub it goes:

Gali: “My brother keeps away from me, seems like he’s afraid I’d extinguish his flame.”
Tahu: “Sister, I’m only afraid you’d evaporate near me. One moment of carelessness - and you’re done for.”

I think it conveys the whole brother-sister bickering much better. On top of that I always thought the hot-air punchline to be kinda… lame? But maybe that’s just me.

I also like Hahli’s speech near the end of the movie better in the dub. The original goes:

“This island is a great and wondrous place. Never have any been as blessed as we are to live in such paradise. I love my home, Jaller loved it too - but above all, Jaller respected his duty. Let us repay him by doing our duty. Let us remember him by fulfilling our destiny. Let us go forward together. Let us awaken the Great Spirit!”

Which is all cool and that, but I find the dub ver even more emotional and touching, especially with how the voice actress delivers the line:

“We live on a beatiful island full of wonders. The gods bestowed us with a wonderful gift - living in this paradise realm. I love my homeland, Jaller loved it too - but duty was the most important for him. Let us thank him by fulfilling our duty. Let us honor his memory by fulfilling our destiny. Let us go together into the darkness below - let us awaken the great Mata Nui!”.

I also very like Treespeak in the Polish version, although I can understand why it’s hated by so many in its English form - English Treespeak basically just connects two words with a dash, which is hardly creative and kinda lazy. But the Polish Treespeak actually takes parts of different words and meshes them together to create a new word - for example, a word “chmura” meaning “cloud” was meshed with a word “nieboskłon”, which is a very fancy and literary way of saying “sky”, to create “chmuroskłon”, which in English version would be… “cloud-sky”, I guess? Not as impressive imo.

FUN FACT: in the Legends of Metru Nui dub, Nidhiki was made female, for whatever reason. He was even being called “little sister” by Krekka. So I guess that’s the one thing Polish dub screwed up, but otherwise I find it phenomenal.

Wow, that is pretty extensive!
I have to say that I too didn’t understand the complains until I watched the original.

Gali: “My brother keeps away from me, seems like he’s afraid I’d extinguish his flame.”
Tahu: “Sister, I’m only afraid you’d evaporate near me. One moment of carelessness - and you’re done for.”

I watched the Polish version - and the line I mentioned at the begining caught my ear. Did Takanuva say: “I don’t plan on losing!” ?

FUN FACT: in the Legends of Metru Nui dub, Nidhiki was made female, for whatever reason. He was even being called “little sister” by Krekka. So I guess that’s the one thing Polish dub screwed up, but otherwise I find it phenomenal.

I heard about that. Is there somewhere I can watch it?

I realized an interesting difference in the czech dub. Kopaka’s famous: “Rahkshi - washed and chilled.”

There, it is actually: “Rahkshi - flushed and frozen.”

The didn’t know that the polish version was uncensored until I clicked the video. I thought you had the same problem as we have in Germany with the movies.

The Nidhiki thing is weird. I had a friend who thought he was female and I didn’t see why. It seems he was not the only one lol.

Many people still think Nidhiki is female.
I suspect someone thought he sounds like an old witch, or something.

I heard about that. Is there somewhere I can watch it?

He doesn’t sound that different from the original version, though he is referred to as female multiple times.

I watched the Polish version - and the line I mentioned at the begining caught my ear. Did Takanuva say: “I don’t plan on losing!” ?

You are right, the polish Nidhiki doesn’t sound much different, nor like a female.

While I enjoy this approach to his voice, I always prefered the czech version.
It is very different from the throaty choking voice he has in english, polish (and I presume many others?)

The czech dub just sounds more like Nidhiki to me especially when you know his backstory - a treacherous Toa of Air.
This Nidhiki sounds like an insidious out of tune violin.
Here is what I mean: https://www.youtube.com/watch?v=rCCw9R3LKnQ

Also Lhikan’s reaction to Vakama’s capture lines up with the animation - a gasp.