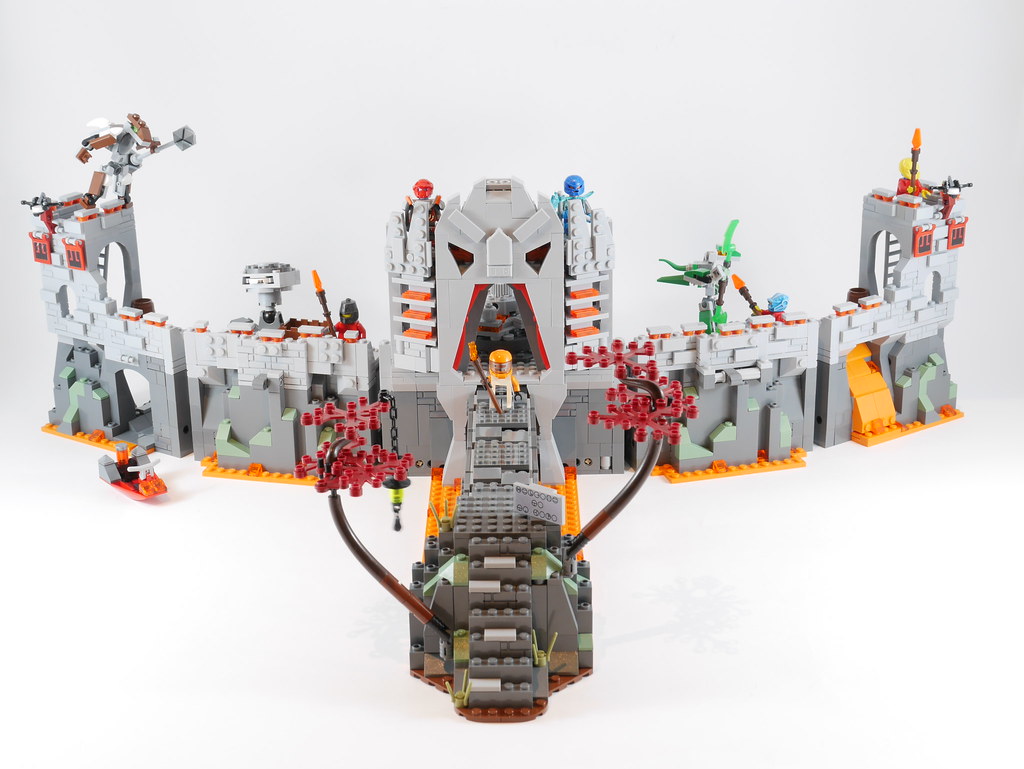 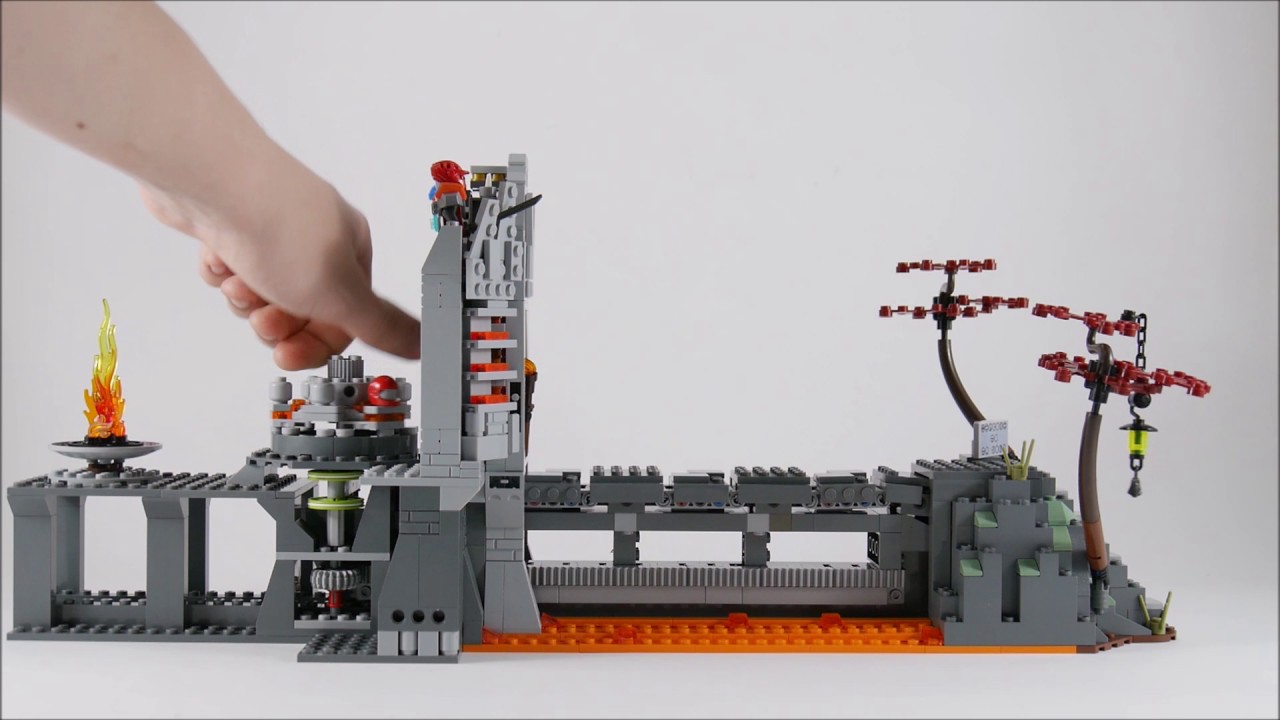 The Rahkshi are attacking the city of Ta Koro! The mythical mask of light is hidden deep in the fortress and the Rahkshi are determined to find it, but the Toa and the Ta Koro Guards are here to protect the city. Fire the Kanoka Disk launchers at the Rahkshi and lower the stone pillar drawbridge. Blow up the wall of the frotress to give the Rahkshi a way in, and use the hidden floor catapult to fling the Rahkshi away. Find the mask of light hidden away behind a lavafall to find it before the rahkshi can! 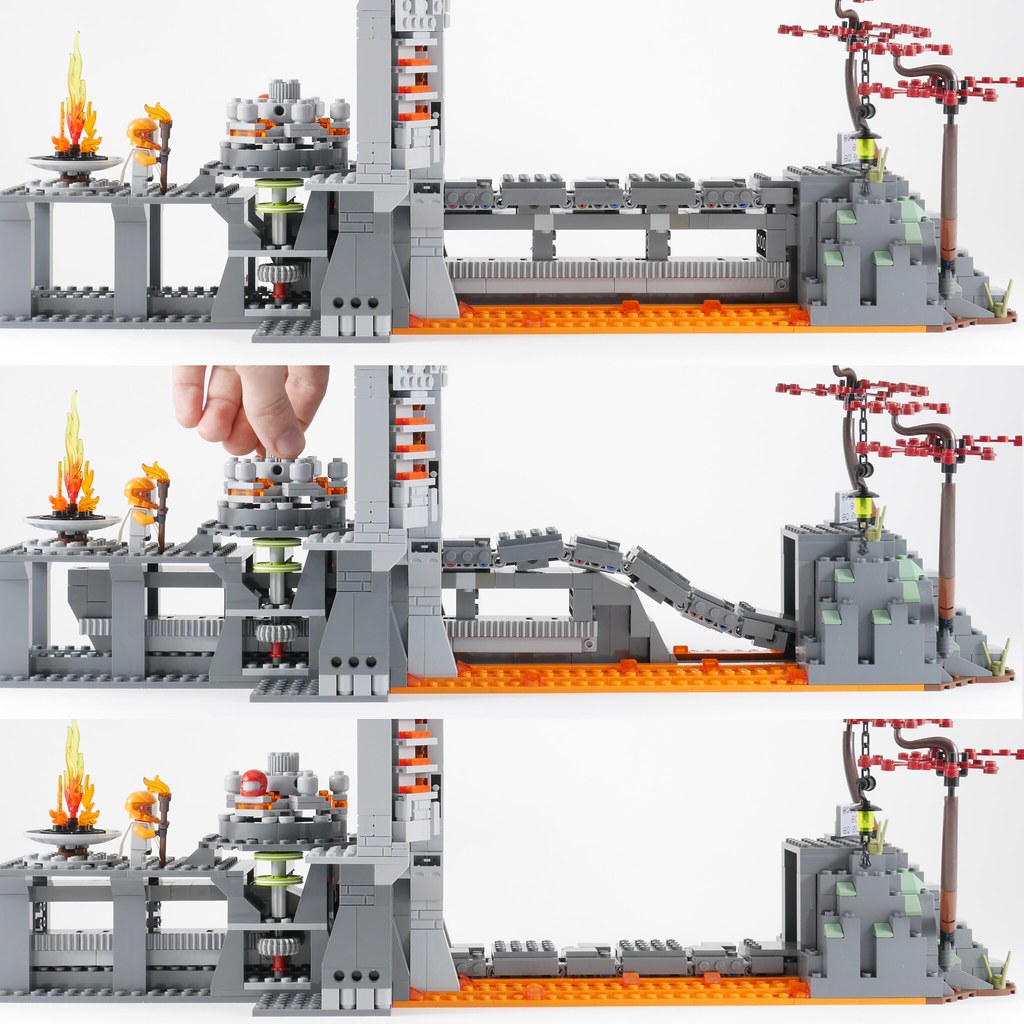 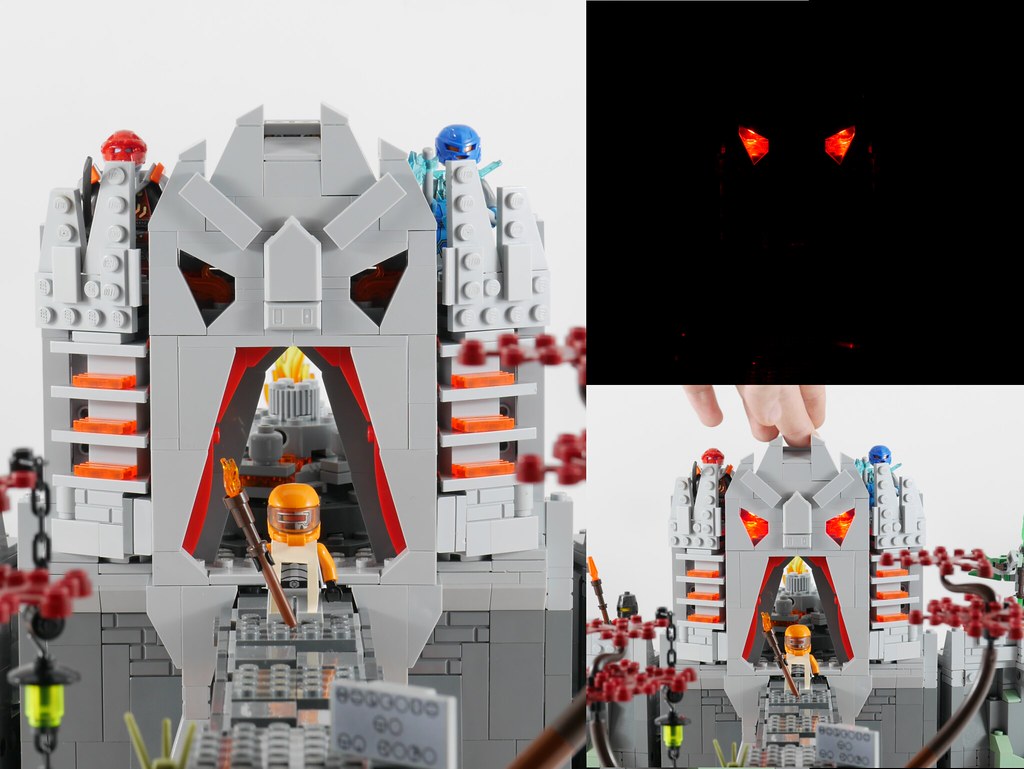 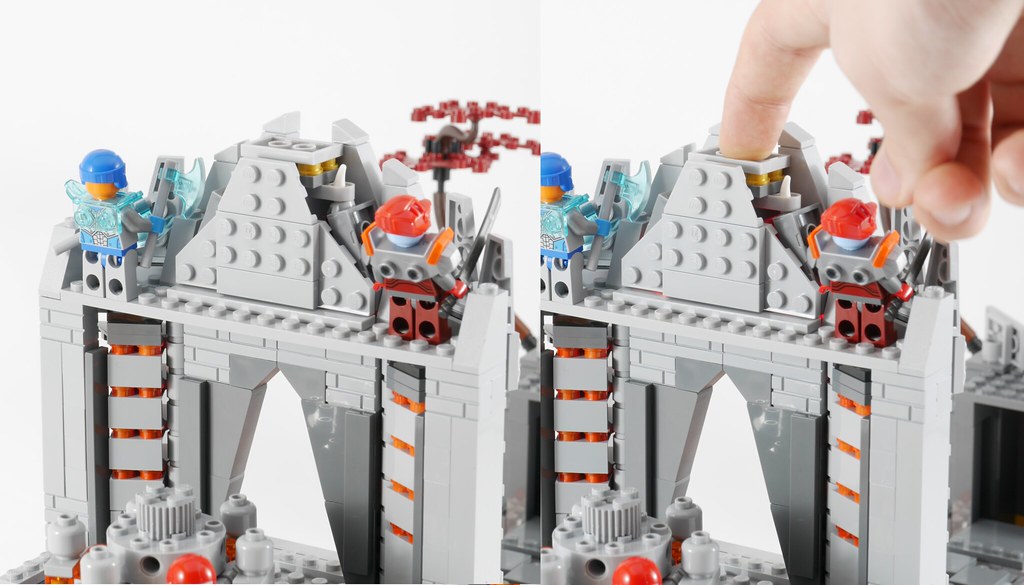 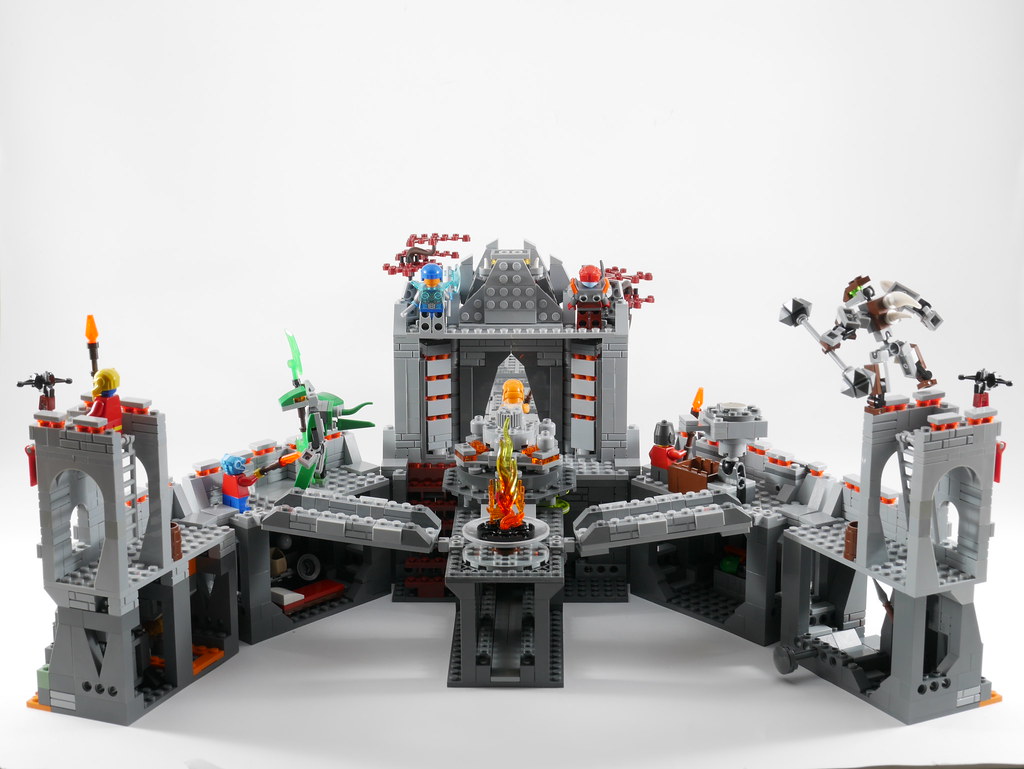 This is intended as the one big set that comes at the end of the year, almost always a fortress-like build. This build takes inspiration from a lot of sets like this that have come before such as the Battle of Metru Nui (The Kanohi-like gateway) Helm’s Deep (Similar aesthetic, exploding wall and re-arrangeable design) and the Chima Lion fortress set that was released in 2013 (drawbridge and head gateway, sectioned up design, turrets on the ends and launching vehicle), and a bunch more that would take too long to name.

I also took some influence from different versions of Ta-Koro, but in particular from Mnog with it’s charred forest and mask-collector-monument-thing (sorry I don’t know what it’s called)

Also worth noting the price is has a $10 plus onto the number of pieces guide due to the burps and the two light bricks.

EDIT: Should also mention who that other Matoran is, seeing as it should all be canon characters. He’s Kalama, a member of the Ta Koro guard. 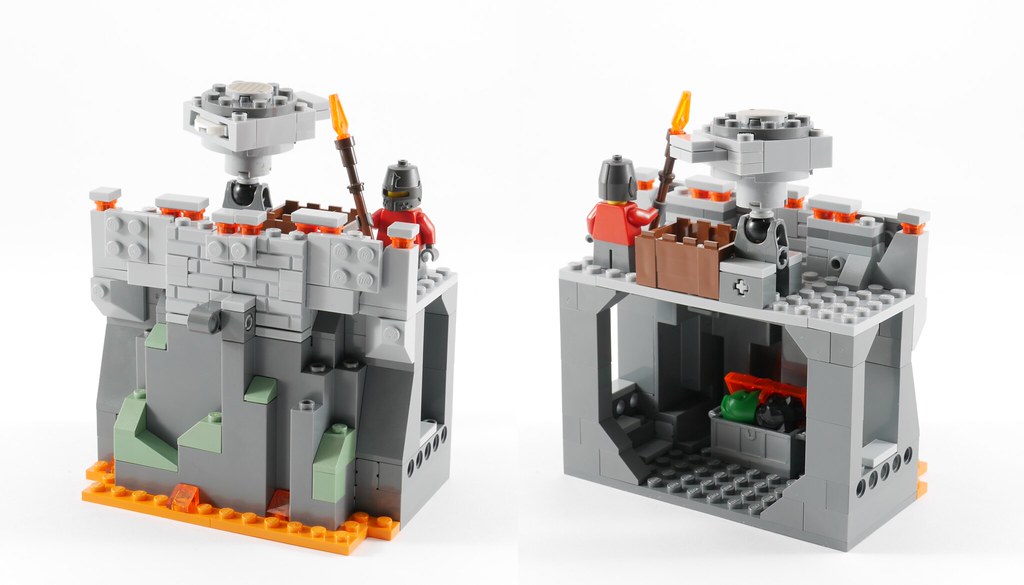 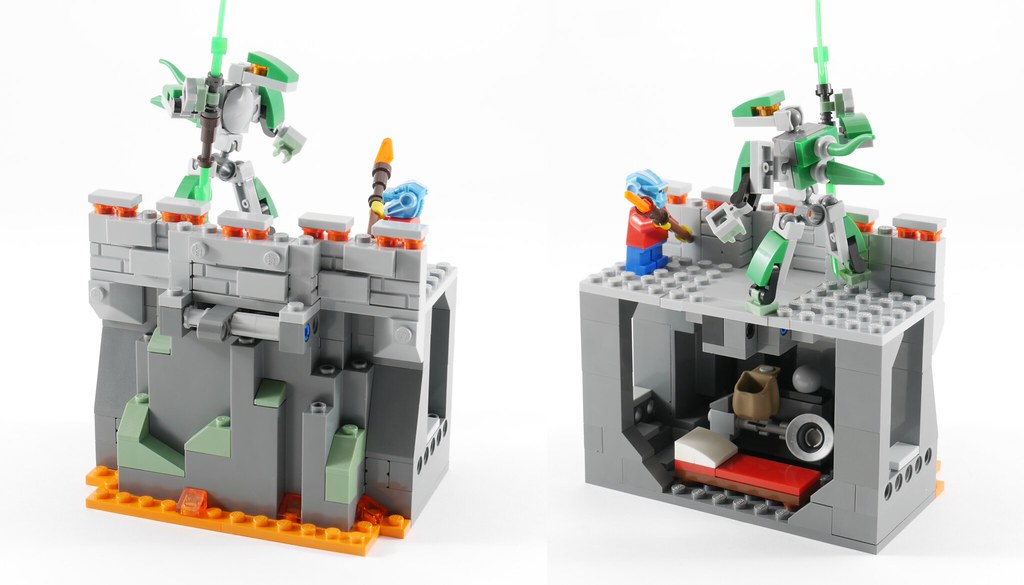 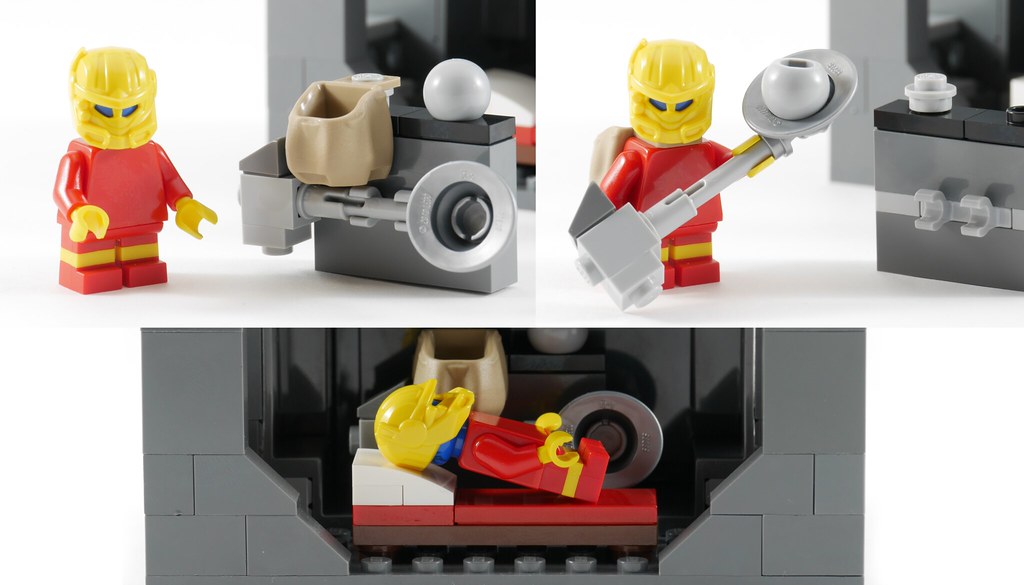 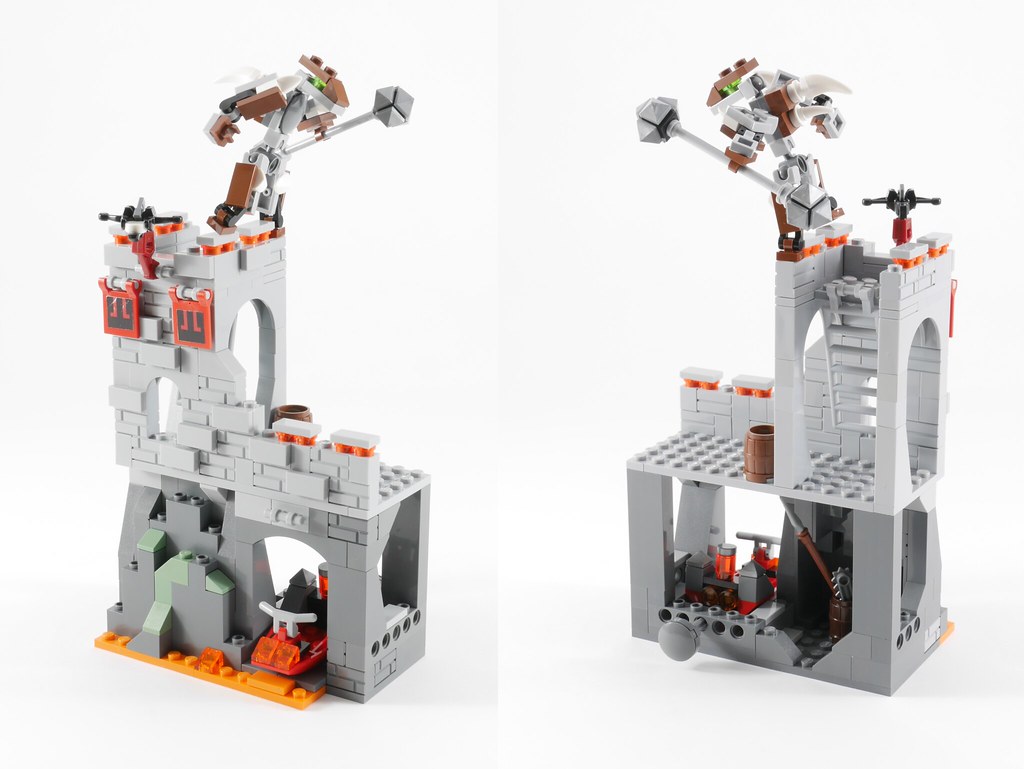 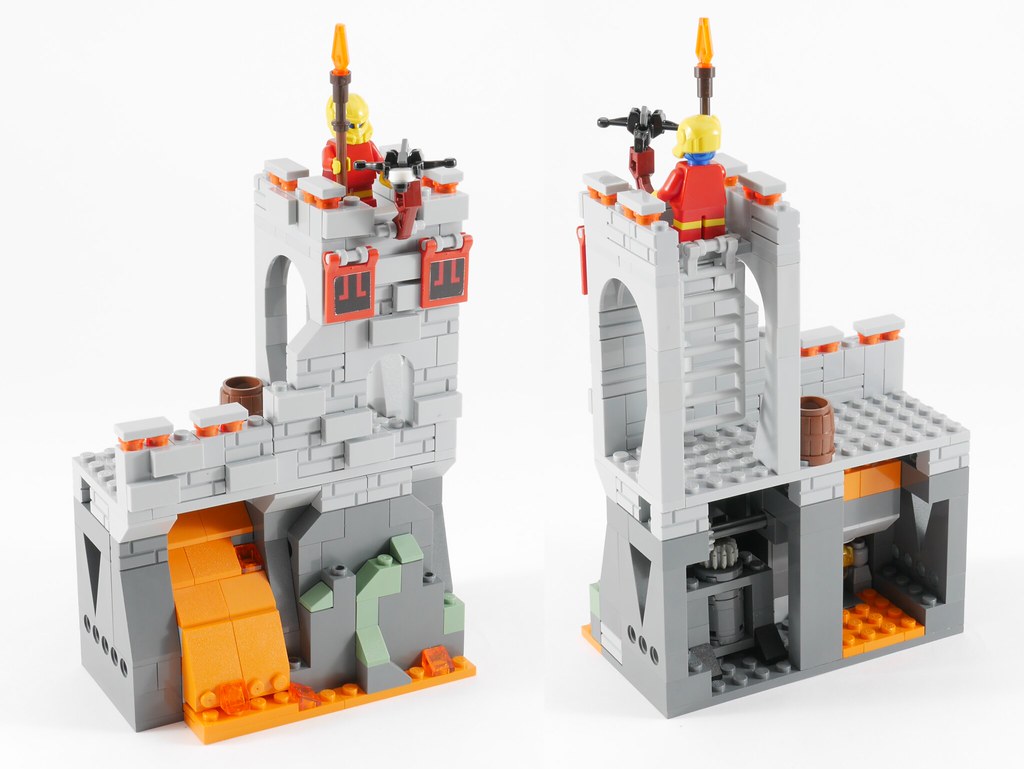 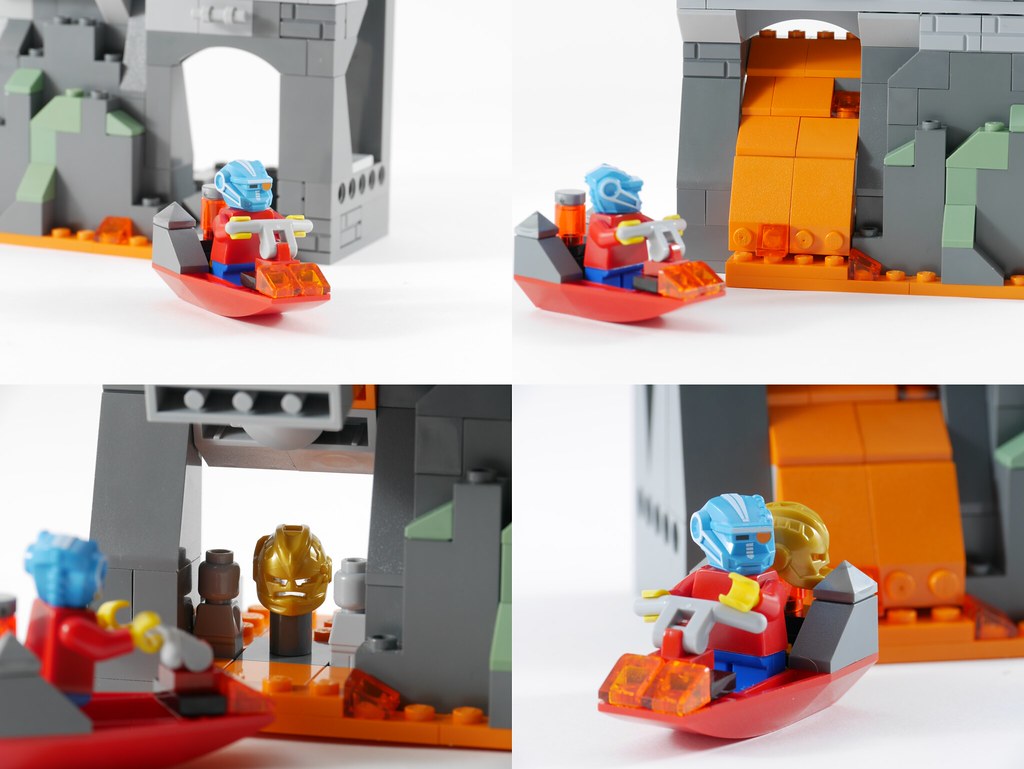 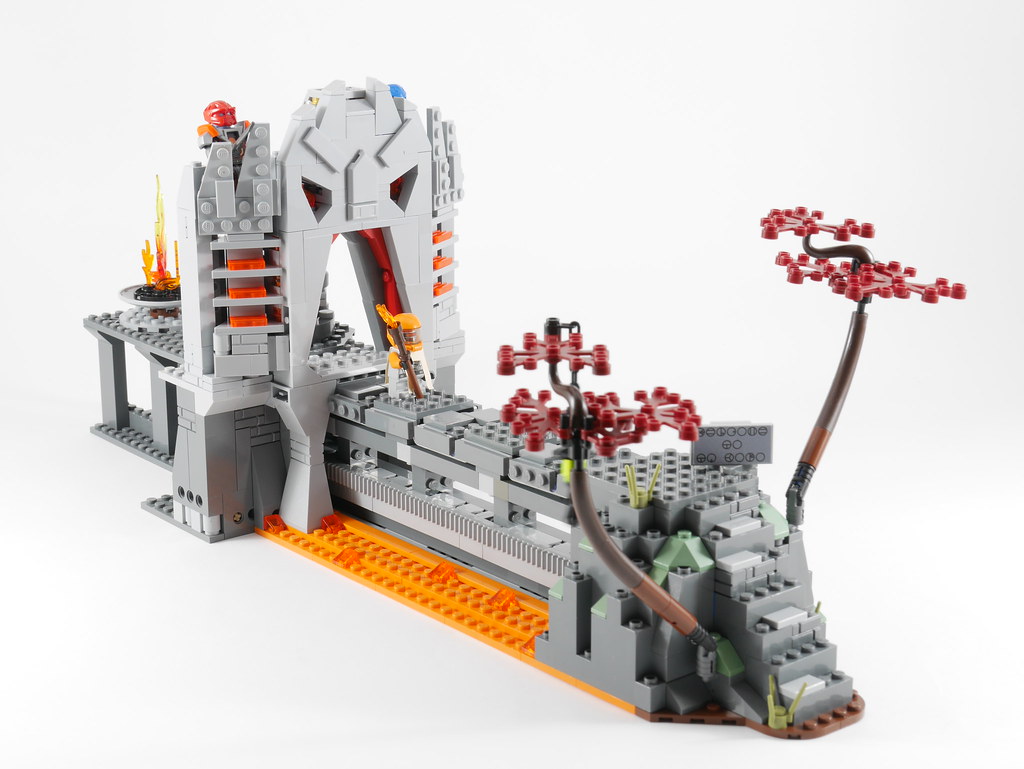 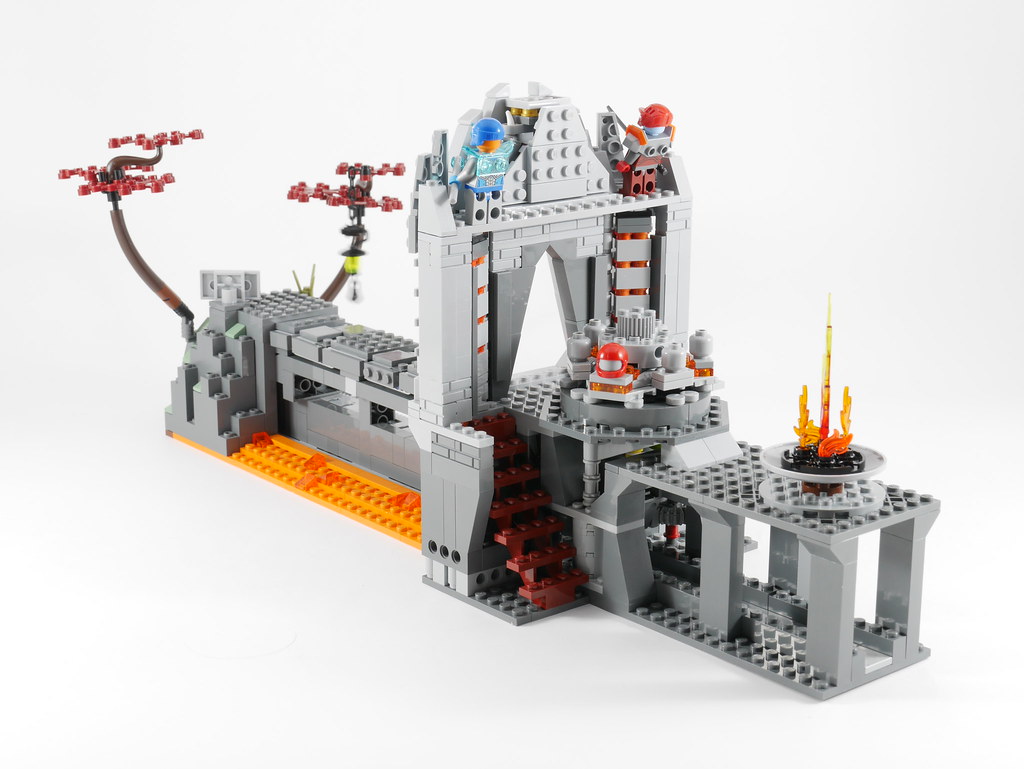 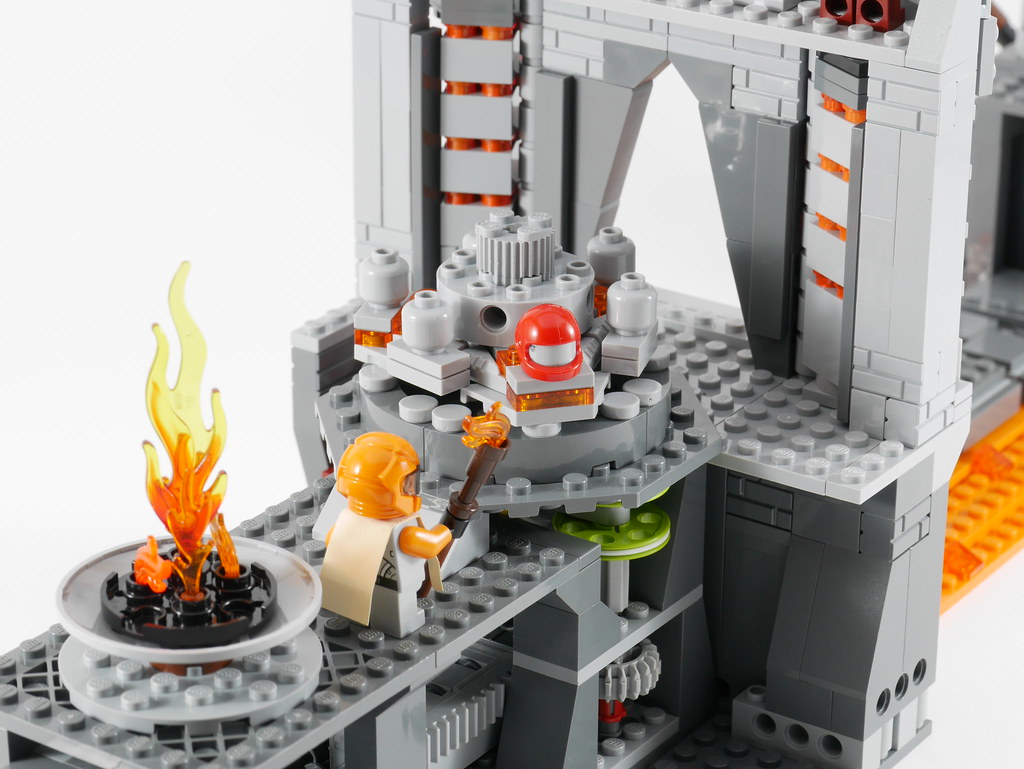 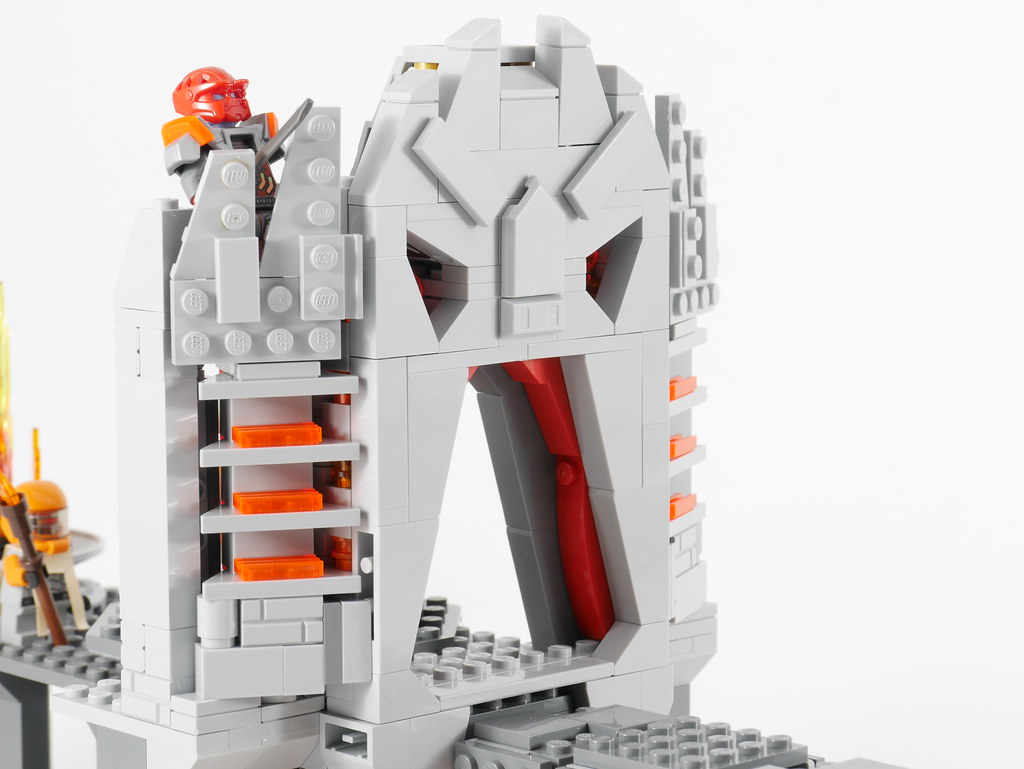 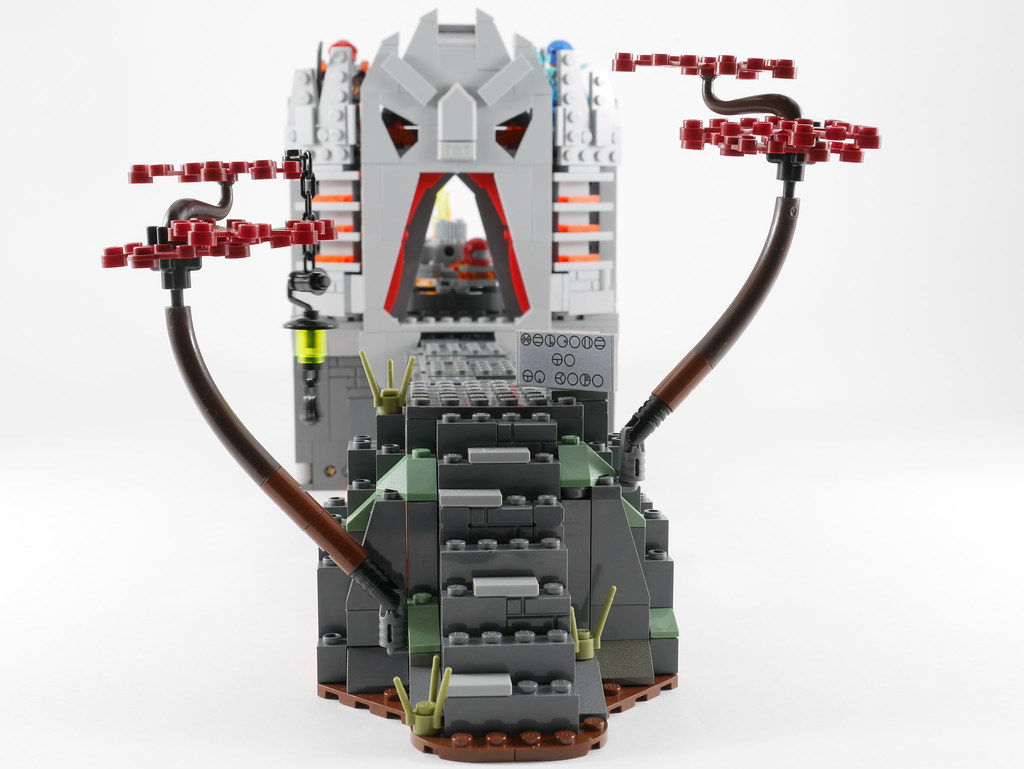 Yes these trees were inspired by the trees in the Temple of Airjitzu set. They’re a great design why not use them. 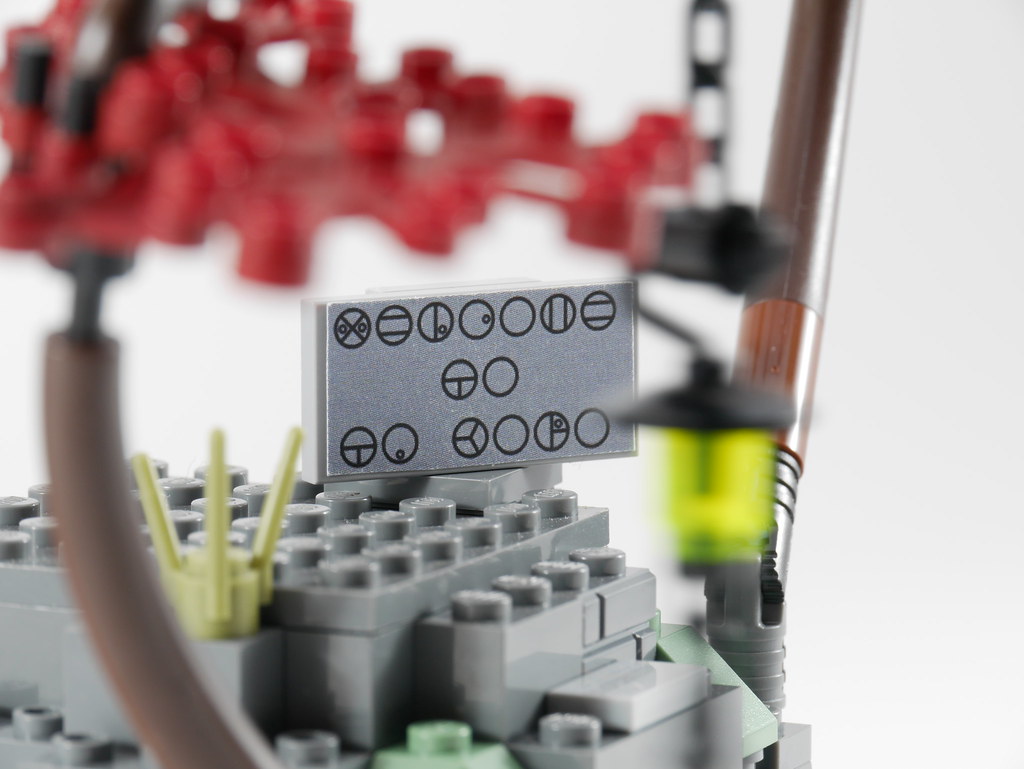 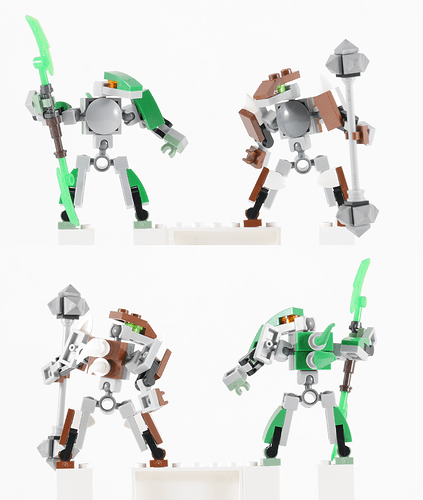 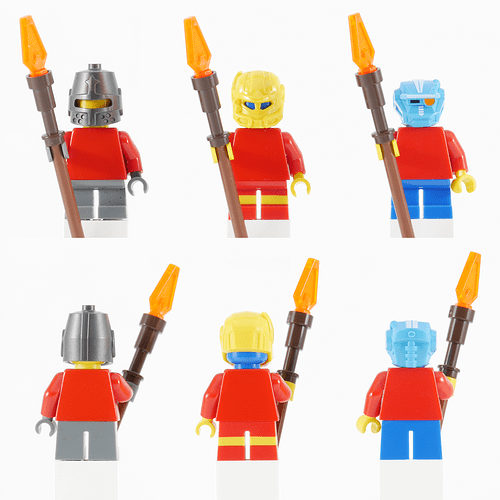 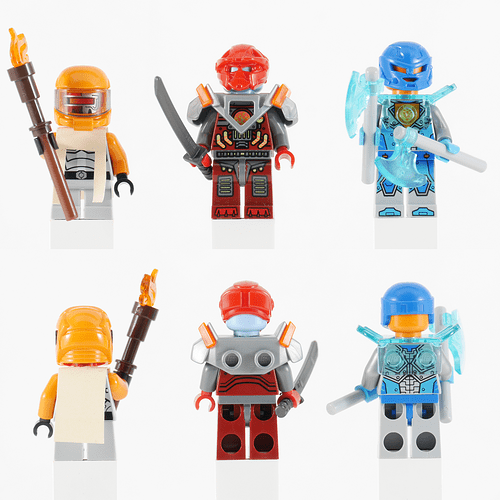 This is the connector piece that connects the different sections together. You don’t have to use it but it allows a hinging motion for more arrangement possibilities. 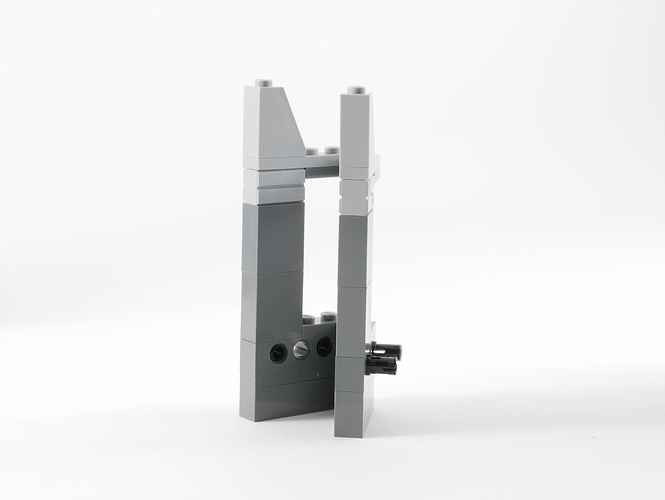 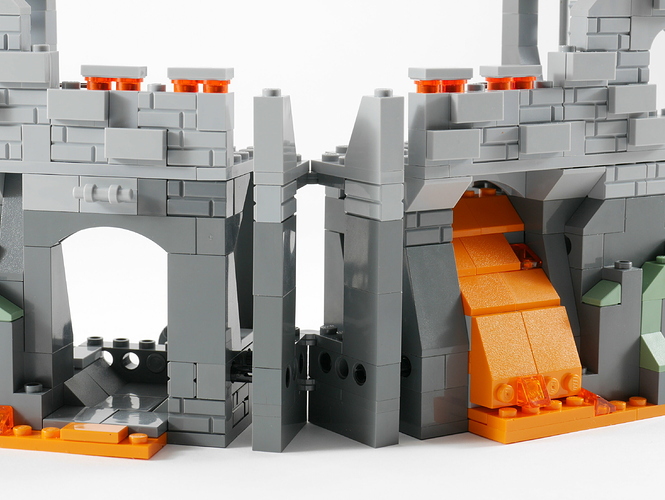 Sweet cheezits this thing has got to win something.

You really made it feel like a set; awesome job!

Something about the design of the Rahkshi’s torsos looks a little weird, but this is an otherwise remarkable creation. The shaping and level of detail are superb with the inclusion of things such as the burnt trees, and I like how the main gateway has light up ‘eyes’.

Dang, this is probably the best non ldd entry yet!
Everything looks fantastic.

You had me at the bridge thing.

There is so much good stuff here on here but man the bridge thing? That thing is WILD.

Fantastic stuff! my only gripe would be a few too many exposed studs for my taste.

This is amazing! Seriously this is so incredibly cool…as a MOC.

But… as a LEGO set, I’m just looking from a LEGO set perspective - it’s too many exposed studs, a bit wide, big, there’s not really enough the inside. Sure, you added in a LOT of fun play features, but some of the functions I think are a bit too technical for a normal $150 LEGO playset. I think it needs some smoothing out and some more extra builds that aren’t attached to the main build.

The figures are great, especially the Rahkshi ones.

Those tiny things still don’t deter from the fact that this model is incredibly incredible! You’ve done an amazing job. You get my vote for #1

The photos are also incredibly close to what LEGO does so I give personal bonus points to that.

Love every function of this thing, especially the bridge being able to be lowered. Also impressive that it can be heightened as well.

As soon as I clicked on this thread I gasped.

I will be super disappointed if this does not win first place.

This is absolutely fantastic! This looks exactly like something LEGO would put out, if not better. The functions are executed so perfectly and the overall design of the playset is phenomenal.

Good luck in the contest!

This is really well-put together. The functions and features would totally work as an official set.

I think we have a winner!

Very awesome man. I love it so much.

The shape, the greebling, the size, the function, the everything (beside the figures) are flawless.
This deserves to be one of the Top 3.

One of the best entries so far IMO

dude this is amazing

I’m speechless, It’s all I could ever want. LEGO, HIRE THIS MAN

WOW! This is real winner material!