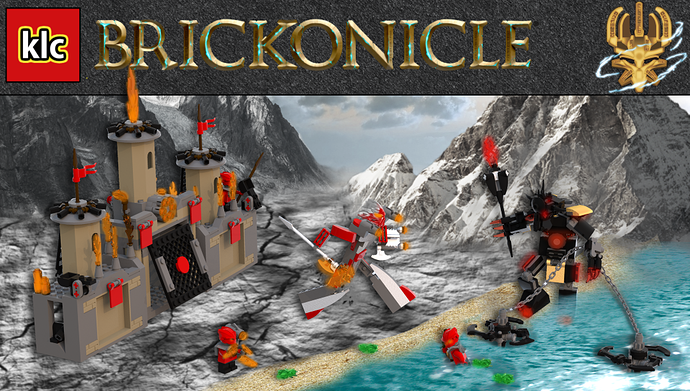 If you cant tell, this is [sorta] supposed to be an “interpretation” of this piece of concept art

blob.jpg1569×650 525 KB
(I wanted to make the dragon dude, but characters have to be canon and all so I settled for Makuta bla bla) 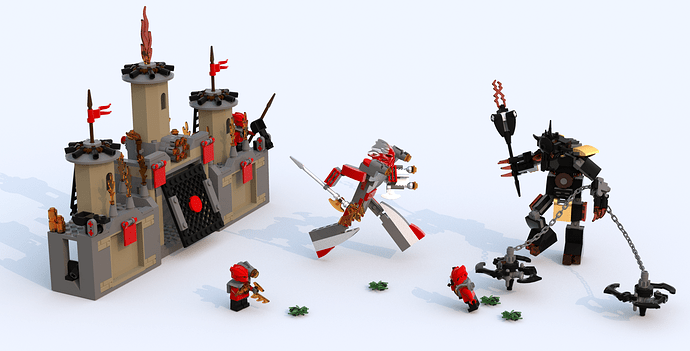 The village fort is pretty nice, but why is Tahu so tall and thin? He can hardly walk into the gate normally. Makuta is relatively blocky as well-

The castle looks like its from lego’s early kingdom lines, Tahu and Makuta don’t look very good, and whats the point of the villagers having stubby legs if Tahu is giant.
And Makuta’s arms are mirrored as if you copied them and forgot to flip the armor.

Every time I look at that piece of concept art, all I can think of when looking at Tahu is Evangelion.

Anyhow, the set is pretty nifty, though I have to agree on Tahu being too tall. though otherwise it seems pretty close to the art as far as a brick build. I sure couldn’t have done better, so that’s a thumbs up in my book.

Also, the brick built MoUP is actually pretty darn good in my opinion, hard to tell it isn’t the actual mask from a distance.

@Square The base isn’t scaled for the big dudez. I don’t think they would be able to fit in the concept art either.

@AwesomeJoel27 Thanks for the feedback. I just thought the villagers looked better with short legs. Nice catch, details like that go unnoticed while building @3 am x_x

This isn’t bad, actually. The castle looks pretty nice, actually, but my only complaint is the large size of Tahu and Makooti. Also, how did you get Tahu’s mask onto the body? In the third picture, it looks like it was photoshopped on.

That’s because it is photo shopped on

why is tahu so huge 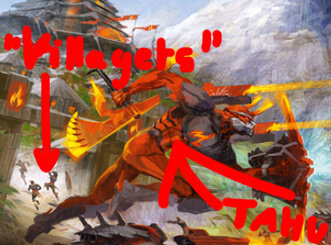 I think that’s just the depth of the photo. The villagers are far away, so we perceive them to be smaller.

@BBricks @Sammythekat
This is at least they way I see it. For my purposes Tahu = giant kaiju fighting robot

@BBricks
@Sammythekat
Actually no, look at the original image, there’s a villager in between Tahu and whoever he’s fighting, and he little extra stuff is close to him, the scaling was probably a literal representation of CCBS figures to minifigs.

The thing in green is obviously an animal of some sort, bearing no resemblance to a villager whatsoever.

First off, as @BBricks said, the thing in green is some animal.

Of course the one in the back’s gonna look smaller, it’s further away from the viewer, just as the protector in the front, who’s torso is roughly the same size as Tahu’s, is much bigger, because he’s closest to the viewer.

@AwesomeJoel27 where would this villager you’re referring to be? the one behind the shield? because that one is in the background, fighting the other bad guy generic, who appears to be the same size, due to

THE DISTANCE BETWEEN IT AND THE VIEWER .

I’m not directly comparing Tahu and the villagers. I’m using the two creatures as references to compare the size as we can conciser them our constant. If Tahu is the same size as the villagers then the creature in the very front should be HUGE

they’re on opposite sides of tahu.

Of course the one in the back’s gonna look smaller, it’s further away from the viewer, just as the protector in the front, who’s torso is roughly the same size as Tahu’s, is much bigger, because he’s closest to the viewer.

did you not read this part of my post?

What villager coming from the water? You mean the creature? Geez, it’s like your not listening to my entire argument.

The creature in red is far away, thus if we were to have a reasonable estimate of its size we would probably get it to be villager size. Second, do you think that the concept artists would have the nerve to make the Toa for that year the size of buildings?

way it was drawn, it looked like a creature.

and the way you made this:

threw off where the ground was.