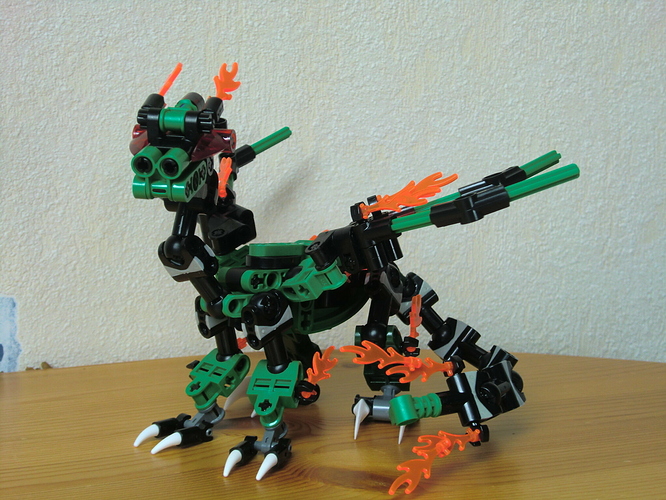 The name of these reptilian Rahi originates from the high ground they build their nests on. While originally common only in Po-Metru, these Rahi over time populated the whole city, nesting on tall buildings or in trees. The nest usually is the center of their hunting grounds, although Cliff Drakes sometimes venture further, if something catches their interest.

Roughly as tall as a Matoran, Cliff Drakes commonly are far too curious to be afraid. Matoran often consider them pests, since they are known to enter houses, air ships or even the chute system occasionally, causing a lot of damage with their exploration. Whenever any major work had to be done outside, at least a squad of Vahki was needed to ensure that the Matoran could work undisturbed.

Cliff Drakes normally aren’t aggressive, although they were known to deal great damage with their claws and teeth to objects they investigated. If attacked, Cliff Drakes usually just fly away, only when there’s no way out do they fall back on their most dangerous weapon – cloaking themselves in a mantle of fire that burns everyone venturing too close.

Rahaga Norik says: “The biggest problem is that they’re far too curious for their own good. Place something they find interesting – a polished tool which reflects the light or just a colorful stone - in a spot that can be seen from above and they’ll come. The Visorak know this, and it’s hard work to attract and catch more Cliff Drakes than them.” 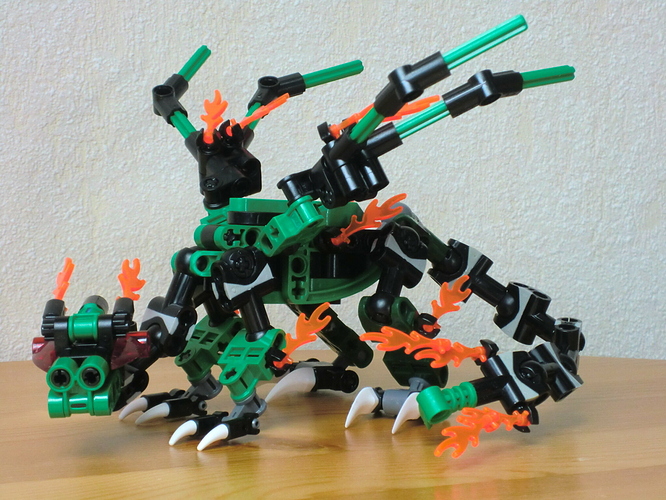 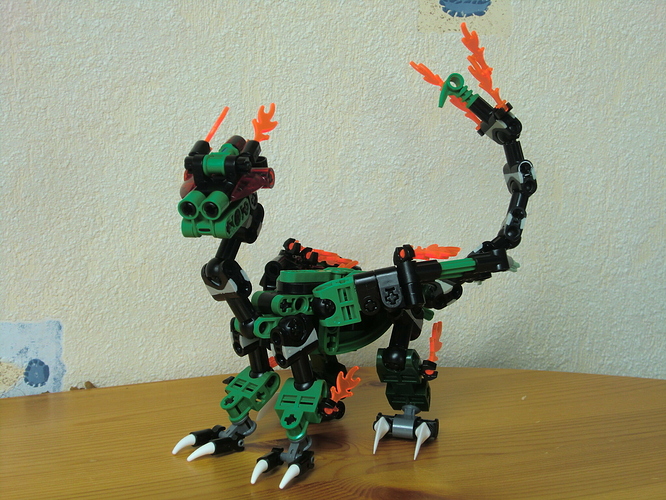 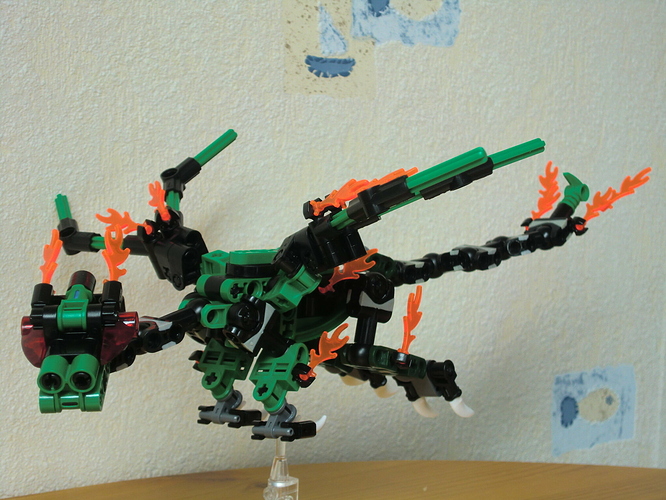 Yeah, well, what’s there to say? I came up with that head and immediately decided to make a whole MOC - and I’m pretty happy with how it turned out. Especially how small it is compared to all the articulation and complexity it possesses.
The grey parts irk me a little bit, but there wasn’t really anything to be done there. Also I’m not quite sure if all those flames look good or not - they were an important part of the head, so I decided to add more, but I’m not that sure about them - without them something seems to lack, though.

Well, comments and criticism always appreciated - if anyone wants them, you can find the building instructions for this MOC in the tutorial topic.

That’s it from me, here are some more pictures: 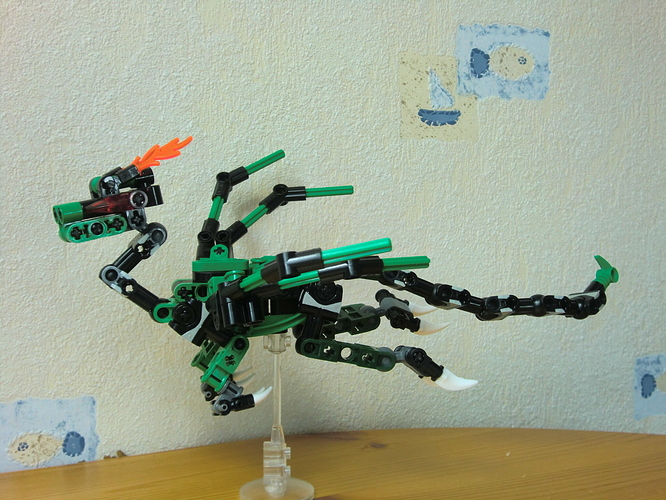 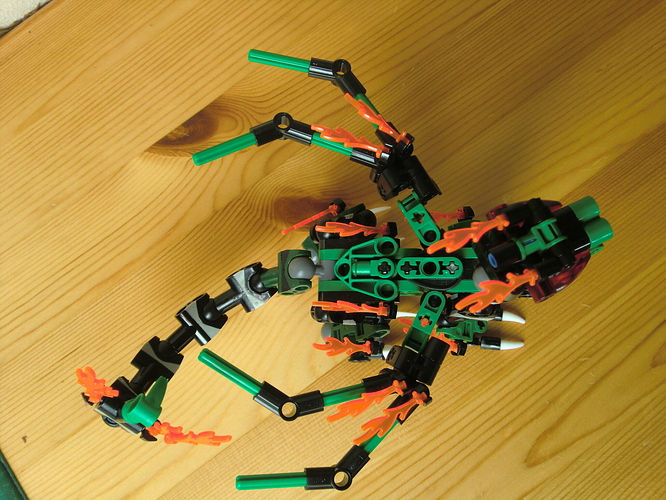 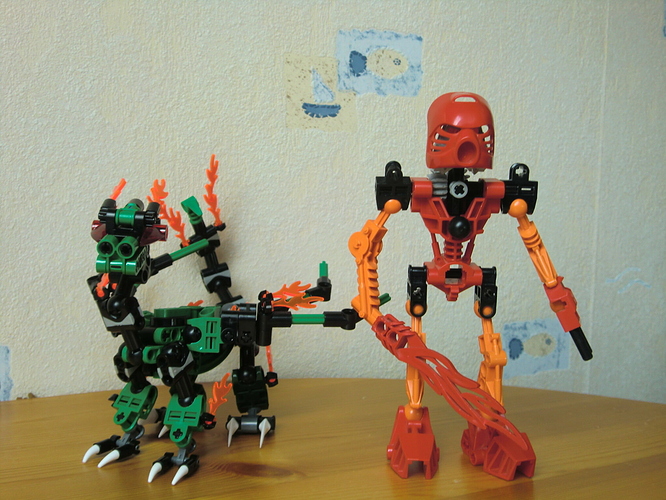 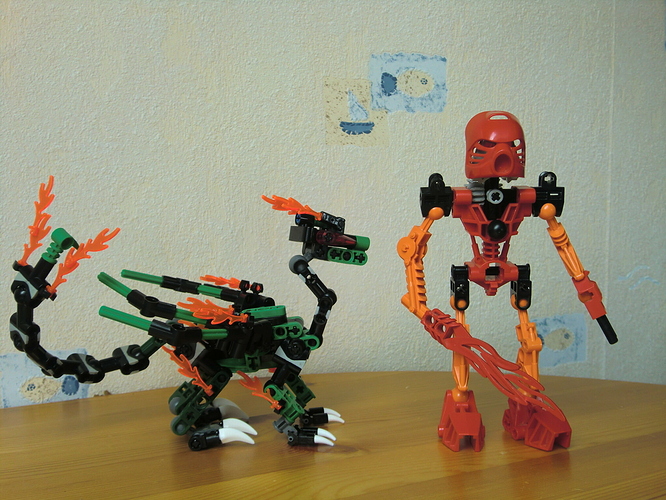 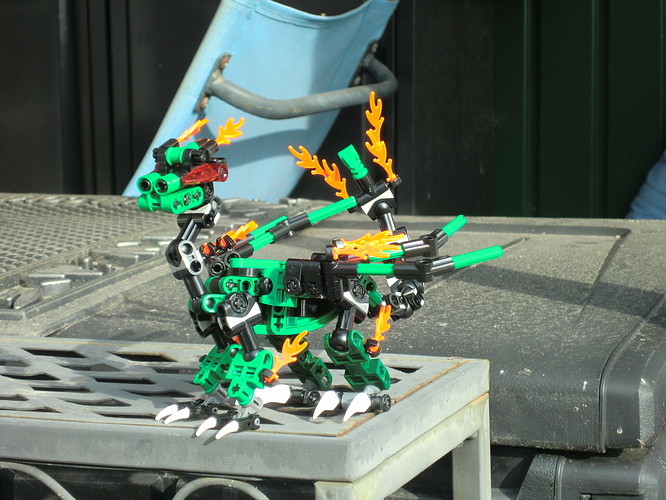 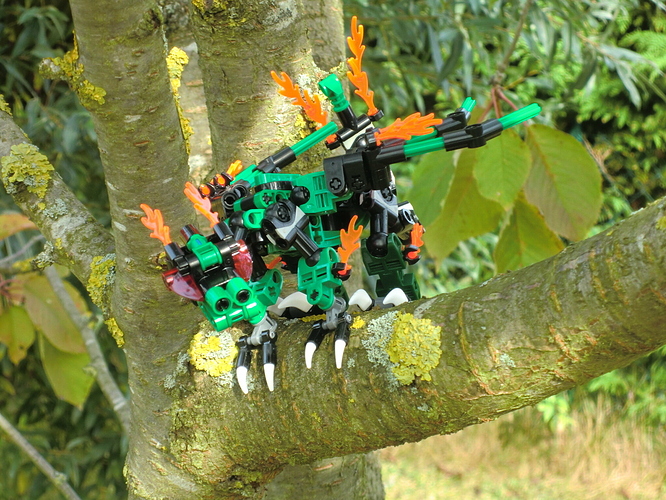 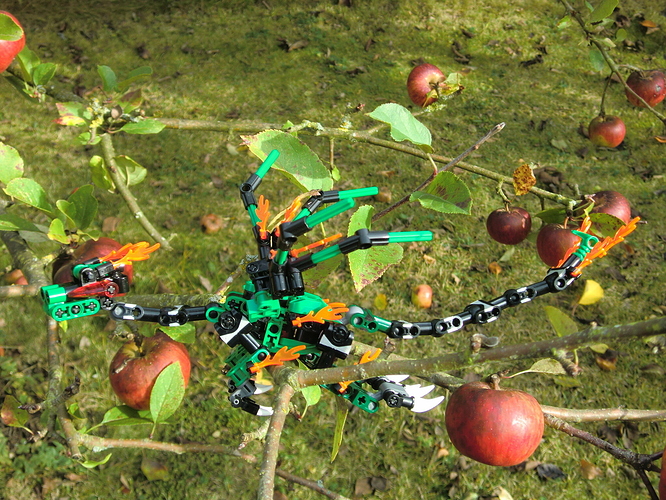 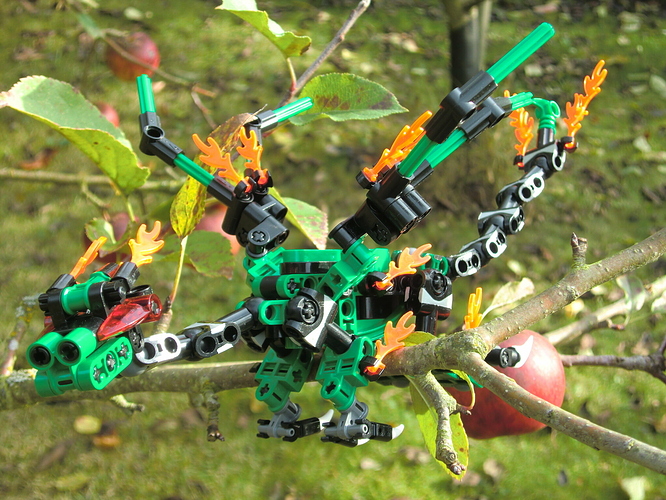 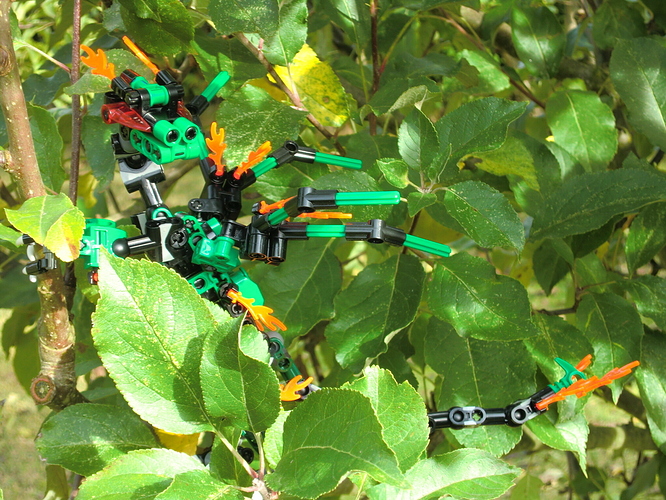 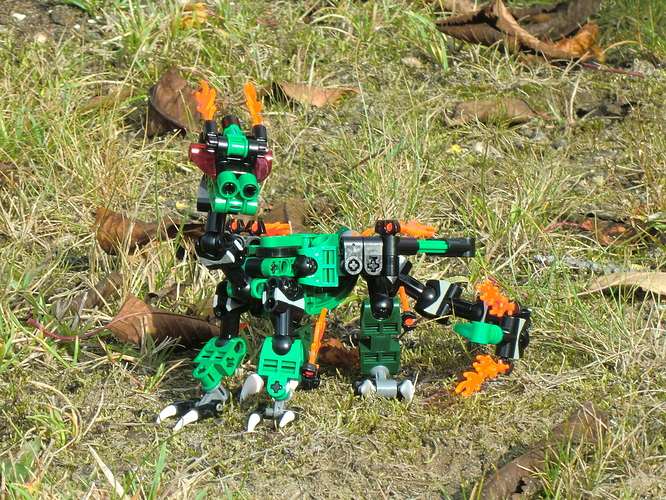 Some pictures taken outside to see if I could persuade my camera to get the colours better.

are those axles just color corrected or painted?

It’s like a Bionicle version of Lloyd’s dragon, good job.

You mean those axles on the wings, right? I got them from this 500 parts box that was sold somewhen in the past - like that were you could get the golden Vahi and the Disk of Time from, only a different one.

There were a lot of axles in strange colours in it, come to think of it… length 3 was red, length 4 green, length 5 white.

hmm odd. I don’t think that it was an actual lego parts box xD. Brickset doesn’t have any recollection of green axles.

They definitely are from one - the box still has to be somewhere in the house… It could have been something like a Europian or even Germany exclusive thing, though… I guess I could try to find the box tomorrow.

I remember that I got it from ToysRus and there were also a lot of Bohrok limbs, a Pakari Nuva, and my only Kaukau Nuva in there - oh, and 4 Mctoran disks and other Tohunga parts - you could never get the Mctoran in my country as far as I know.

it looks amazing, so small yet so much personality, I love the use of the green axles to make the wing and the fire thingies

This dragons is on fire!

I remember that I got it from ToysRus and there were also a lot of Bohrok limbs, a Pakari Nuva, and my only Kaukau Nuva in there - oh, and 4 Mctoran disks and other Tohunga parts - you could never get the Mctoran in my country as far as I know.

I got that box as well. I wasn’t sure what set those axles came from until now.

This is fantastic!
But y’know, I think you should give me all those modified mata hands with axle holes. I need them, All of them

Really liking the build, colourscheme is grand too.

So much nostalgia right now.

Pretty cool, it has a lot of character and great shaping for its scale.

This is most impressive. 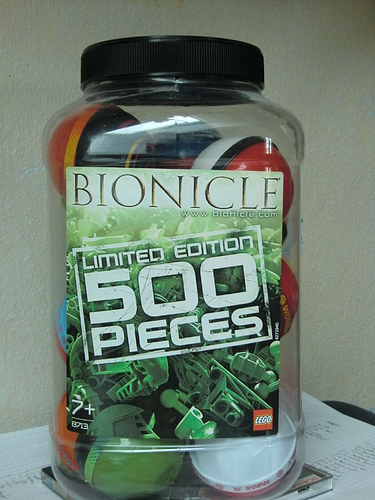 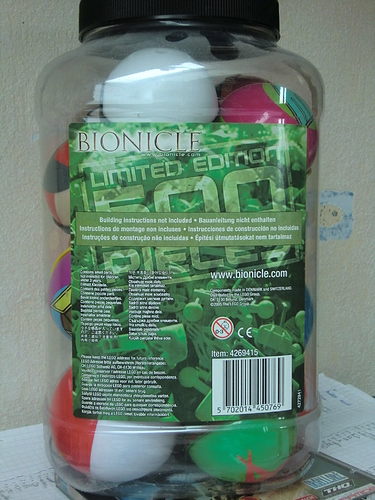 I need them, All of them

Well, at least half of them have cracks

That’s why I didn’t use them until now.

There are absolutely no stability issues. Of course I could use CCBS bones - but I personally feel like they don’t work well with G1 themed MOCs most of the time - and also I have no CCBS bones to spare.

In all honesty this really is quite a beautiful MOC. I think the flames actually look like feathers, making it look very organic. You’ve really encapsulated the Rahi 2001 feel with the pieces used throughout (especially in the head build). The wings are a bit odd as they have “Dragonbolt syndrome” or “any dragon that isn’t ninjago syndrome” where they’re just skeletal. Maybe just a bit of fabric could’ve solved that, however I understand why you would not want to do that. I don’t really have any irks with this MOC at all (apart from the wings); I think it works really well overall.