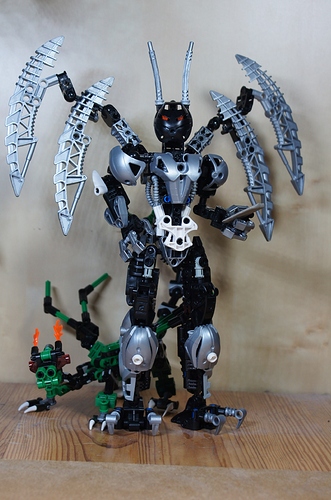 When it came to creating Rahi, Kindrix stood out even among her fellow Makuta. She was known to work nonstop on one Rahi after the next, hardly ever leaving her laboratory. While most other Makuta sooner or later started with creating ever more dangerous predators, Kindrix stayed true to the original purpose of the Brotherhood and filled the Matoran Universe with life, both useful to the Matoran or indifferent to them. Especially small Rahi, like the Kereta, were Kindrix’ favorite subjects, as she saw it as important to have Rahi of all sizes populate the Matoran Universe. She was one of the main supporters of Anjan’s proposal to develop working ecosystems and one of the main contributors to establishing the lower levels of the food chains.

Kindrix never thought of the Brotherhood as an organization that should intervene in the politics of the Matoran Universe more than necessary and often voiced said beliefs. While she saw the need to stop the Barraki and end the Matoran Civil War, she never fully approved that it was the Brotherhood taking matters into its hands. She also was one of the main critics as Miserix assigned Makuta to the various regions of the Matoran Universe, claiming that the Brotherhood had no right to control anyone.
When Teridax declared his Plan at the Convocation, Kindrix was one of the first to side with Miserix. Only when she saw that the number of Teridax’s supporters was far higher, did she change sides, consoling herself with the thought that maybe she could keep creating Rahi and never actually had to betray Mata Nui.

Kindrix, though, had no idea, that even her initial support for Miserix would be enough to get her in serious trouble. She was somewhat surprised, when Gorast and Icarax showed up in her lab to “discuss” her position within the Brotherhood shortly after the Convocation. Being no fighter, Kindrix was quickly defeated, but before anyone had a chance to actually kill her, Chirox showed up and managed to convince Gorast and Icarax that experimenting with a Makuta could yield some interesting information and surely Kindrix would be in no shape to give anyone much trouble. So the only thing Icarax and Gorast took with them was Kindrix’ mask, to mount in the meeting hall, while Chirox brought her unconcious body to one of his secret labs on Visorak.

In the following years, Chirox kept her nearly constantly in a coma while exposing her to one mutagenic substance after another, sapping away most of her powers in the process, as well as keeping her body from turning gaseous.
Kindrix finally died during the Great Cataclysm, when the vat she was in was shattered and her body crushed. 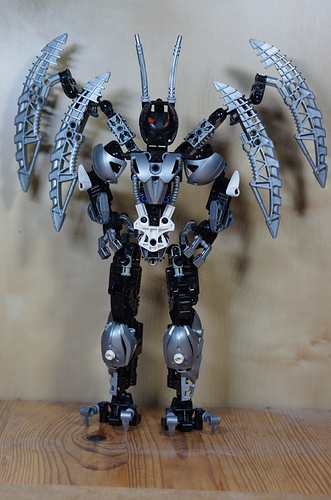 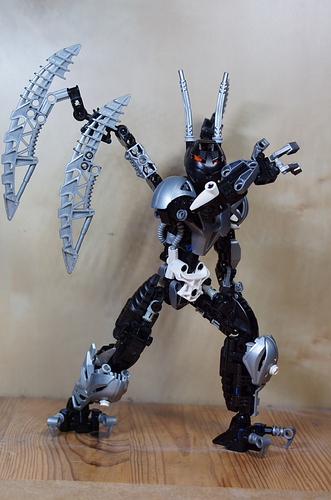 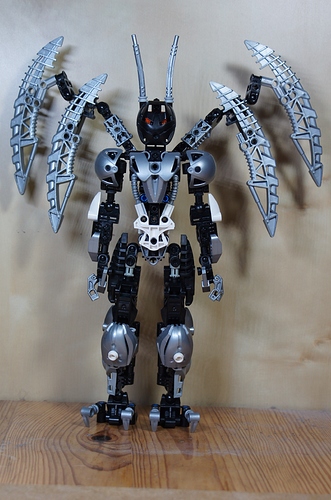 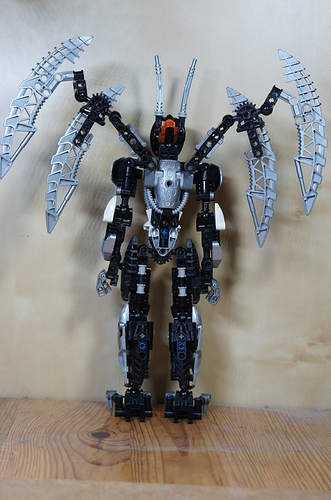 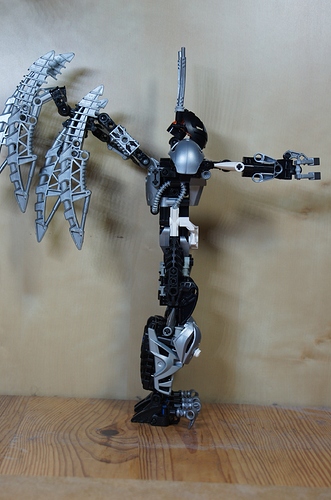 Equipment:
Being no warrior nor ever wanting to be one, Kindrix never carried a weapon, trusting in her powers if necessary. She wore the Kanohi Sayin, Great Mask of Negation which allowed her to nullify all kinds of non-physical effects targeted at her or around her (for example she could nullify psionik powers like telepathy, but couldn’t stop a flame blast).

She had a modified pet Cliff Drake she called Skani. One of her Rahi creator peers released it on the Southern Continent after Kindrix’s death.

Well, I didn’t think I’d be able to complete another MOC this year, nor did I plan to revamp one of mine this soon, but I spontaneously had an idea how to improve the feet and a quarter hour later I was already working on the legs. Also, to be honest, Kindrix’s former version wasn’t very good looking - very G1 like, but not really good.
As a comparison of maybe also how much I improved in two years: 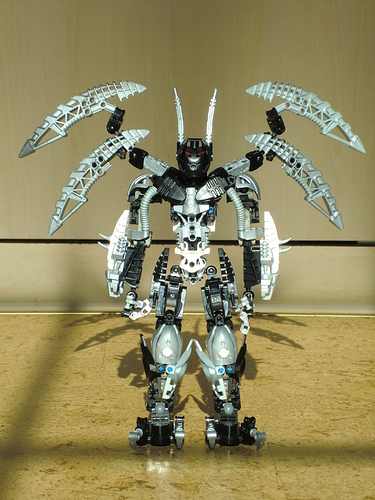 Hopefully you can see how much I tried to keep the look - especially with the legs. For the arms it was a little more difficult.
The main goals were to make the revamp look smoother, more feminine and to make it much more stable (couldn’t pose the legs at all previously without the MOC toppling over). I’m also quite proud of how I did the eyes, although admittedly the build does hinder neck articulation a bit.

Reminds me of a dragon humanoid, but not quite a draconian.
The mocs great, though it uses an overused colour scheme.

White looks out of place, being mostly contained to the mid-section

I don’t like how the Nuva shoulder armor looks on it, but everything else looks cool

White looks out of place

I probably wouldn’t have included it if the original didn’t use it, but I can’t say that it really bothers me, either.

I would have preferred using it the way it was attached to the original, but that would have made the shoulders too broad in my opinion. Nonetheless I wanted to keep it. I’m personally ok with how it looks in a neutral pose, but I do admit that if I pose the arms it starts looking a bit odd from most angles.

I really like the way you did those wings.

Well, I’m glad I kept them as they were, then