I was putting some old sets back together and looking for squid ammo, but the only two squids I could find are noticably different colors. On BrickLink, sets with trans-yellow squids all list trans-orange squids as an alternative. I also saw this wiki article with a picture of a spectrum of squid colors from bright yellow to darker orange.

I did a bit of google-ing, but I couldn’t find anything about how these different colors are distributed in sets.

Is it just random? Like, would different copies of the same set come with different colored squids? And, more importantly, would a set ever come with two mismatch squid in the same box?

I’m pretty sure that the only squid colors for certain were yellow, orange, and blue, but there was some color variation in the actual pieces.

I’ve actually got an orange one with a red melding in it lying around somewhere. I’ll see if I can find it later.

In terms of my sets, I got a few of my Barraki brand new, and they typically contained one yellow and one orange.

Sea squid come in multiple shades of yellow-orange. Some are more orange, and others are more yellow. The colors you get in a set are random, so yes, it is possible to get two mismatched ones.

Not exactly, there’s just variation between the set colors and the official colors.

would a set ever come with two mismatch squid in the same box?

The only way would probably be to get a brand new set or two. But I suspect it’s random, some of mine are entirely yellow whilst others are leaning close to the red side.

yeah, it was from the squid ammo pack that was released in 2007
Edit:
this 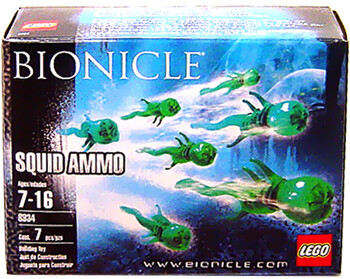 From my knowledge, the squids were primarily yellow but were injected with red dye to create varying shades of amber. It’d be interesting to find the most red of the squids.

The blue squids weren’t just blue, they were greenish in varying shades. Most of them were an aqua blue rather than trans light blue. I will have to see if I can still find some in my parts bin to compare. 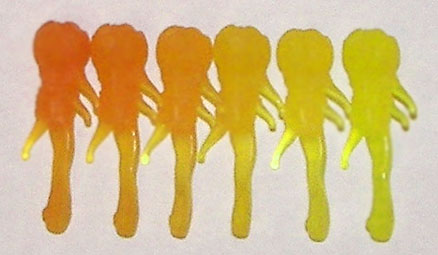 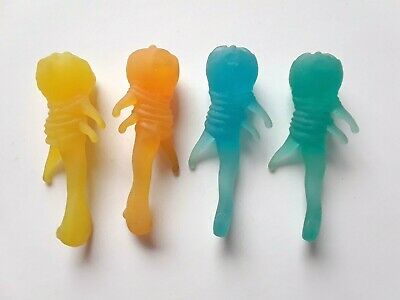 There are two separate spectrums available for squid ammo:
orange/yellow - in sets
blue/green - in packs
There are no rigid categories within these spectrums.
All the squids were always random.

Dual-molded parts are typically not highly consistent. From my memory however, you’d usually get one that is yellow and one that is more orange with each Barraki, but that should just be by pure chance, with an equal chance for each variant. If we take the image provided by TheChronicler as an example, if those were the only variants to exist, you’d have 50% chance that it’d be one of the left three, and 50% that it’d be one of the right ones. Ultimately, this boils down to the most probably scenario being that you’ll end up with one of each of those, but not guaranteed.

The way dual-molded parts work may be best demonstrated with the poisoned Hau Nuva. This mask has four variants that have been noted by the community: 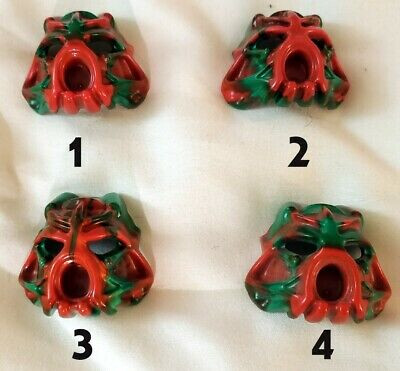 These can be identified by a number found on the inside of the mask. Note that this kind of number exists on almost every part, including the normal Hau Nuva, however, sadly the squids are one of those parts that do not feature any markings on them. These number exists for LEGO to be able to trace which mold the part came from, in case there is something wrong with the part:

Why do bring this mask up? The aforementioned semi-consistency in the pattern of the dual-molding. The pattern varries between the parts as the two plastic colors have to travel different distances, based on their position in the mold. Though the number of positions may vary, depending on the size of the mold and the size of the part, this is true for all dual-molded parts, including the masks of the Protectors from G2, and of course, our squids here. While I definitely can’t say there isn’t still some factor of randomization, there should be a number of fairly self-consistent variants of the squids as well. As for which ones are in which set, this is of course still entirely random.

(These positions of the molds are also how they randomized Krana and Kraata shapes, which means this does not apply to Kraata patterns. This is why there are 8 Krana and not 6, because they had the space for 8.)

Let me get all my squids and wash them first in their native environment: 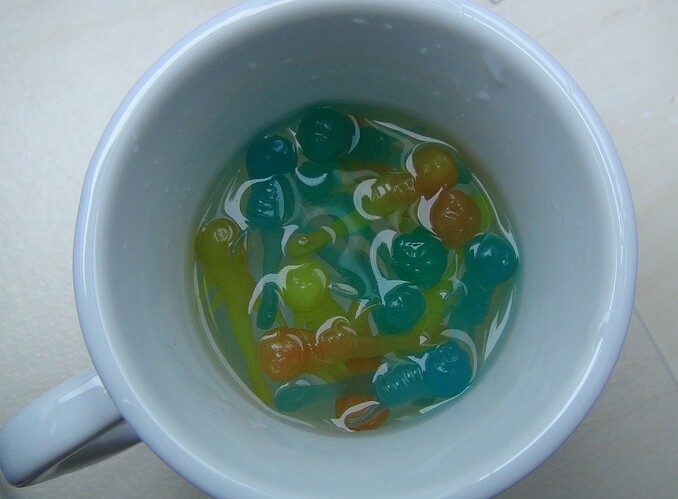 Then arrange them into a spectrum of colors (do not mind the numbers yet, I will get to them): 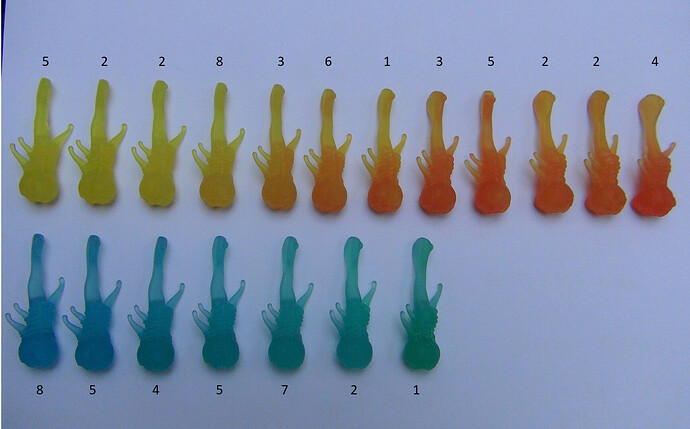 As you can see the first row ranges from pure lemon yellow through orange to amber. I have to agree with @TheChronicler for surmising the second color being injected is red instead of orange.
Some of the squids are more heterogenous in their color melding and you can see the streaks of red dissolved into the yellow to create this final orange/amber look. This is the same as orange/red zamor spheres from the year prior.

Squids are aquatic creatures and indeed when you submerge them in water, you can observe the colors within the squid more easily. A little bit of water in a Petri dish and…: 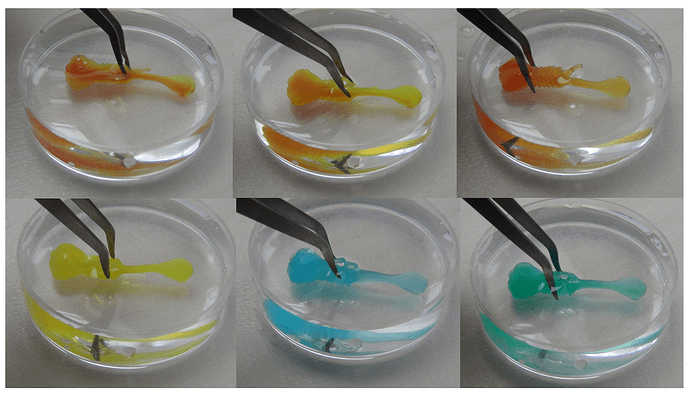 And now, what are those strange numbers I mentioned?

however, sadly the squids are one of those parts that do not feature any markings on them

Actually…
a little bit of microscopy reveals numbers at the point of injection:

The numbers in the very first picture are the numbers for the respective squids. Make of that what you will, but I was unable to find any pattern.

The reason I have been able to do this so quickly is because I have been contemplating making a LEGO microscopy series where I would look at certian parts up close and I happened to make my test runs on squids because those are quite non-standard Bionicle pieces. That is why I knew about the small numbers.

Edit: This needs to go in the next edition of the Bionicle Iceberg!