Could Hydraxon's face piece be a mask?

So, clearly the object that Hydraxon has on his face is removable, as Pridak is able to confront the second Hydraxon with it, even though the first is long gone to the red star. My question is, what is it? Is it a mask, similar to how Umbra wears a mask despite being unable to use one? Or perhaps its a helmet, maybe with some sort of breathing equipment? Obviously, the set represents the duplicate, who breathes water like the Mahri, but there’s no info on if this applied to the original. Has there ever been any info on what this is?

I’m pretty sure it’s been confirmed to not be a mask, which really leaves it being a helmet as the only feasible possibility.

I don’t think it actually is detachable. Unless you consider what Takadox did to be “detaching”.

To add some context, here’s a quote from Hydraxon’s Tale:

“Recognize it? You wear it’s twin on your face. This belonged to the real Hydraxon - The one we Barraki killed 1000 years ago.”

The word “wear” would suggest that is it removable like a Kanohi, but this could also be attributed to Lego not wanting to explicitly say Pridak is holding the severed face of his enemy.

The story has always been a little loose with these types of things, given that every part of every being is technically “detachable”, since they are machines.

But I don’t think Hydraxon’s face is detachable in a traditional, Kanohi-like sense.

I don’t think it actually is detachable. Unless you consider what Takadox did to be “detaching”.

Well, it was definitely removed, because it wasn’t sent to the red star with him.

But thanks for the quote, I was not aware of it. Could be its a sort of faceplate, covering the ‘organic’ parts of his face, since he doesn’t usually wear a mask.

really adds some disturbing elements to how he was killed, then…

Could be its a sort of faceplate, covering the ‘organic’ parts of his face,

That’s kind of what I’m thinking. This is his face, just like how this: 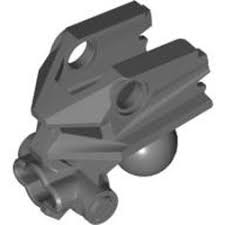 is the face of a Toa Metru.

I don’t think his lack of Kanohi is relevant; Kanohi aren’t responsible for covering up organics.

I don’t think his lack of Kanohi is relevant; Kanohi aren’t responsible for covering up organics.

That’s more of a head-canon thing; I imagine that, while Toa and Matoran have thin faceplates since they’re meant to wear Kanohi over them, Hydraxon’s species would have a much thicker one. it’s not really a matter of covering up exposed organics, so much as protecting the sensitive parts of a face. (and also the AI housed in the head)

That’s more info than Lego would ever get into, of course.

It’s effectively a Kanohi part-wise. So regardless of what it is in the case of Hydraxon, I hope the shape at least gets canonised as another mask at some point. It’d be a waste not to, same for Maxilos.

Why would Hydraxon’s face be modelled after a Kanohi, in-universe?

For some reason, it feels weird to me for someone like Hydraxon to not wear a mask. I know some creatures like Botar or Sidorak don’t wear masks, but it just doesn’t feel right for Hydraxon.

Is it possible it could just be a face-mask of some sort and not a Kanohi specifically? It doesn’t need to have a power, but it might be some kind of visor or faceplate.

I mean wouldn’t it just be a mutated kiril because that is what dekar wore?

No, the original Hydraxon had the same face.

(Also, Dekar had a Kiril)

What if the original hydraxon was wering a mutated Kiril?

Hydraxon is confirmed to not wear Kanohi.

well then what is the point of this topic?

The set designers obviously intended it to be a mask, even if the story team decided it’s only decorative. Ditto Maxilos.

If I had to take a guess, they probably made this choice to preserve their name list. Approved names were a limited resource at that time, and if they gave the mask a power, they would have felt obligated to give it a name.

Though Hydraxon and Maxilos’ masks aren’t any canon Kanohi, and are referred to as helmets, it would be a pretty huge waste to say once and for all that no kanohi in the universe looks like that when so many kanohi have no canon appearance. I always use Maxilos’ mask as the Great Kiril personally.

Why would Hydraxon’s face be modelled after a Kanohi, in-universe?

You’re asking the wrong questions, friend. The real question is, who modelled a Kanohi after Hydraxon’s face?
(would be interesting if Hydraxon, or another of his species, was reputable enough that the Hagah chose to honor him through one of their masks)

well then what is the point of this topic?

The point of this topic is that I didn’t know it was confirmed.

What’s your source for that? Someone putting something on Shapeways is not a canon source.

Unfortunately, Hydraxon’s faceplate is not a Kanohi, and its shape is not even based off a Kanohi.

This leaves this part somewhat invalid for use as a Kanohi mask in any moc that would represent a character that would normally wear a Kanohi mask. However, there is still a way to redeem this part as being a valid Kanohi shape. Follow me as we delve into the lore of mask making.

These are known facts about mask powers :

From the numbers of different Kanoka powers that gives us and all the possible combinations of 2, 3, 4, etc more disks together, we get a total of 25165823 combinations. This number excludes combinations that have both Light and Shadow as they have been known to cancel eath other. It is possible that they are not mutually exclusive for the purpose of Kanoka combining however, but that doesn’t matter much. The point is that is an extremely big number. Credits to @Wolk for the computation by the way.

These are known facts about elemental powers :

Here comes the speculation part. Considering Gravity is naturally rare, and if Toa of Magnetism and Iron have all been killed and their population closely monitored by the Makuta, it stands to reason that Toa (Elemental) Disks of at least these three elements would be hard to come by. If at least one type of Kanoka is hard to come by, then all the combinations involving this Kanoka would be hard to try for mask makers. This would easily leave huge holes in the big numbers of possible combinations. These combinations would never have been tried.

I suppose Matoran could create Toa (Elemental) Disks even without a Toa to give it to, but I suspect they would not be likely to do it on a regular basis. However, we know there are smugglers and traders in the MU. Therefore these disks, while hard to come by, could still be obtained if some Matoran would want to invest the extra effort in acquiring it. Think like the misprint masks of 2001 for example. Vakama says “It was the time of my kind, the time of mask makers … those for whom the art of creating great Kanohi Masks from Kanoka Disks was all that we lived for.” in Legends of Metru Nui so I’m sure some intrepid mask makers could acquire those normally very rare disks.

Therefore, the canon rules of mask making would support the discovery of brand new masks powers at any time in the story.

Here comes the speculation. By combining the basic idea of the two points above, it seems plausible to me that a Matoran mask maker could decide, upon discovering a new mask power, to shape the mask in the likeness of any shape he might have seen anywhere, including the face of another being. It could be incidental, in the sense that the matoran might think he was inventing a new shape while he would actually be channeling his inspiration from an old memory. This is common in art. Or it could be done on purpose, to honor a past hero.

Imagine a Matoran that nearly died in some circumstances and was rescued by a being that was not wearing a Kanohi. He might have this old, hazy memory of the being saving him right before he fell unconscious and unintentionally shape a mask inspired by this old memory, or he could perfectly remember the face of that being and explicitely decide to honor him. Both cases make sense.

Here comes the speculation. Since Hydraxon was recruited into the Order of Mata-Nui by Helryx, it would make sense that we would be one of the more heroic members of the HoA, as opposed to the other, more destructive ones. While the Order of Mata-Nui was a secret order, the Hand of Artakha was not. Therefore, it is possible that Hydraxon was known by at least some people in the MU as being a heroic figure working as a force for good.

If you read this far, you probably saw it coming from miles away. From what I could gather from the canon on the the matter, it seems the following scenario would be entirely possible:

Whether Hydraxon was widely regarded as heroic or not does not matter in practice. He could have inadvertently caused a lot of damage and therefore not being seen as very heroic by most while still saving that particular mask maker at the very last moment before he died. This would be enough for that mask maker to honor Hydraxon with a mask shaped in the likeness of his face or simply be inspired by the memory of the face of that being saving his life.

I have made my point about the fact that a Kanohi shaped like Hydraxon’s face would not break the established canon. Now, to actually make it canon. It requires a particular timing. It requires canon contests, of course, which are happening right now.

If we make it so that the winning entry of one of the Toa Hagah contest is wearing Hydraxon’s face as a Kanohi mask, we would have canonized that particular shape as being the shape of a Kanohi of unknown power. That LEGO part representing Hydraxon’s face, previously left out as being just a face or a helmet, would have become a true Kanohi. The Hagah contest provides a unique opportunity to make it work because the mask shapes used by the Hagah are not even linked to the mask powers. This is a one of a kind opportunity to salvage this poor LEGO part and gain one more actual valid Kanohi to use !

What are your thoughts on this ?

Edit: It turns out I made a lof research that were not really needed because Greg explicitely already stated that it would be possible for new masks to be shaped in other shapes, with Hydraxon’s face as being cited as an actual example: https://greg.thegreatarchives.com/2003-2008/page271#post10816-line7,20