Do MU inhabitants have fingers?

here’s a whacky question:
Do MU inhabitants actually have fingers? or do they just have really sticky connector pieces?

Well we already have many characters with fingers in set form already.

This is an instance where Greg has said one thing and literally everything ever has said another, which seems to imply Greg is strait-up wrong. But I’ll run through it for reasons.

1: The majority of sets depicting MU beings do not possess fingers. Greg’s reasoning is that, because the sets do not have fingers, he could not write the characters possessing them, i.e. no specific actions that would require fingers. Which is good business for a toy line with a novel series.
However, he then took that to mean that they simply didn’t possess fingers, and held fast to that decision, getting visibly annoyed when people brought up exceptions to the rule, which is my counterpoint:

2: In the movie Mask of Light, there is a scene cited time and time again by Greg where Takua reaches for his Kohlii staff and has it magically drawn to his hand. This, according to Greg, is because his hands - and all other Matoran kind including Toa - do not possess fingers, but instead possess magnets in their hands, which allows them to hold weapons and accessories of different natures.

A: But these statements were made in the 2010s, after Bionicle had come to a close - and most notably, after 7116 Tahu and 7135 Takanuva had been released, completely ruining Greg’s argument as their hand pieces had clearly molded, clearly defined fingers, and even earlier 8699 Takanuva had been released, during 2008. But Greg’s response after this point was clear, concise, and direct, with no room for interpretation or guessing.

A: Now I’m not really chomping at the bit to decertify a Greg decision, nor do I possess any amount of authority to hold one word of mine over his decision. But as a layman in the Bionicle cesspool community, it certainly seems as though Greg is just plain wrong, ignoring evidence that contradicts his decision or straight-up refusing to address said evidence when placed directly in front of him. The surrounding posts of the one I quoted mostly consist of confused people asking about Axonn and Brutaka and either getting ignored or curtly shut down by Greg.

Don’t take any of this to mean Greg doesn’t have the final say on undecided canon, because he most certainly does and has for a very long time. But no one is infallible, and I think - in my insignificant and rather biased opinion - in this instance, maybe actual reality wins over Greg’s opinion. IDK.

You can come to whatever conclusion you wish using the same information I used or anything else you can find. All posts cited here were found on the first page of results for searching ‘fingers’ on greg.thegreatarchives.com and all set numbers are from… LEGO sets.

But no one is infallible, and I think - in my insignificant and rather biased opinion - in this instance, maybe actual reality wins over Greg’s opinion. IDK.

There’s one more quote I’d like to add to this, where Greg admits that his no-finger argument is likely overridden by previous media:

Page 659 of Chat with Greg Farshtey.

Im pretty sure they do canonically, (I mean, look at G2 and the miramax movies) but the sets used the “hand peices” due to how common they already were and perhaps not wanting to make a complicated mold or large build that can still connect to things easily on most sets.

8532 Onua, 8723 Piruk, and 8729 Toa Nuparu all have claws. Unless their claws are immobile (think Wolverine), it can be assumed that these were meant to represent fingers. It’s even arguable that the “Tohunga” have fingers in their built-in disk throwers. It seems that wherever the set designers found an opportunity to include fingers (or structures resembling fingers), they did so. Greg has said on multiple occasions that the set designers decide the characters’ appearance, and not him.

I’d also like to note that 8979 Malum and 8990 Fero & Skirmix are portrayed without fingers, even though they should canonically have them.

Finally, in The Yesterday Quest, there are two examples of Chiara specifically shooting bolts of electricity from her finger. If no one else in the MU has fingers, Chaira definitely does.

As far as BIONICLEsector01 record-keeping is concerned, movie citations take precedence over Greg quotes. At least according to BS01’s policy, all MU inhabitants have fingers because the movies portrayed them as such.

Those are claws on a suit of armor worn by a gas cloud. That’s not “fingers” by any stretch of the imagination

Those are claws on a suit of armor worn by a gas cloud.

They’re fingers. When you have Thumb claws on your suit of armor, you’re clearly trying to emulate something.

they don’t have fingers, they have hand toes

they have hand toes

Not in the story, they aren’t. Makuta don’t have fingers, plain and simple.

On the topic of whether MU inhabitants (besides Makuta) have fingers, Takadox makes an interesting comment to Carapar:

“You couldn’t snap your fingers without help… If you had fingers.”

This would imply they at least know what fingers are.

“You couldn’t snap your fingers without help… If you had fingers.”

I would assume he said this because both of Carapar’s hands are claws by this time.

Not in the story, they aren’t.

"Mutran watched the last of the fragments draining through his hand. Then, clamly and casually, he smashed the tank with his fist. The leeches disintegrated on impact. Mutran turned his back on the mess and pointed a clawed finger at Vican.
“‘Clean this up.’ he said. ‘Now.’”

Makuta have fingers, plain and simple. Not static claws, as they can form a fist, and point individual fingers at unpaid interns like Vican. Are they fingers in the typical sense, being constructed out of organic matter and bone? No, but the Makuta used to be as organic as anything else, and their entire armored bodies are as artificial as their digits. Seeing as the books - and all of Bionicle canon - treats the inorganic Makuta exoskeletons as the personage of the Makuta they house, this clawed finger of Mutran’s is very much his finger.

This book precedes Greg’s no fingers answer. The Makuta have fingers.

I will concede that you are both correct and incorrect.

Yes, they do have fingers – of a sort. Artificial fingers, but still technically fingers. I was wrong in that regard.

I guess what I should say is that they don’t naturally have fingers, that we know of at least (unless there’s some quote from before their evolution that references fingers). The fingers on their armour is more comparable to, say, Hahli’s wings. Hahli has wings, sure, but they’re a mutation, not part of her natural form. Toa don’t naturally have wings, but Hahli does.

I guess what I should say is that they don’t naturally have fingers, that we know of at least

We don’t have a quote either way. However, since they went out of their way to give themselves fingers after the fact, perhaps they had them before and wanted them again.

Otherwise it’d be strange to go from being fingerless to deliberately adopting a brand-new way to hold things. They definitely had the resources to go the magnetic route if they were so originally.

Toa don’t naturally have wings, but Hahli does.

But the addition of hahli’s wings was completely involuntary on her part, whereas Mutran had his body made to order. There’s no reason to assume he didn’t previously have fingers if he has them now.

So no, no definitive answer that the organic Makuta have fingers, but we can infer that either they did - given that they had them later - or they really wanted them from the getgo.

But the addition of hahli’s wings was completely involuntary on her part, whereas Mutran had his body made to order. There’s no reason to assume he didn’t previously have fingers if he has them now.

I was mainly using that as an example of someone having an anatomy part that isn’t natural to their “species”.

For the sake of argument, I’ll add this: Mutran is a mad scientist, emphasis on mad. He’s the guy that gave all the Shadow Matoran wings and claws. Could be he just felt like having fingers for the heck of it. Perhaps he wanted to “feel” his experiments, groping them and handling them, in a way he can’t python just touching it with a fingerless magnetic palm. 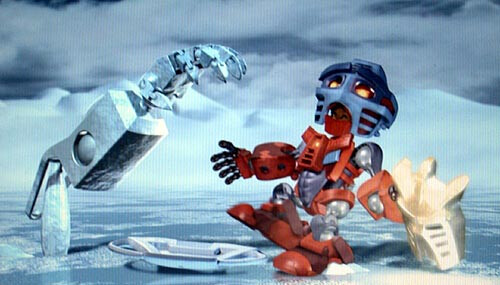 There was also a movie where the Rahaga had propellers and forehead lights, one where Dume’s mask was being worn by two people at the same time, and one where Thornax Launchers turned into laser guns.

And the problem is?