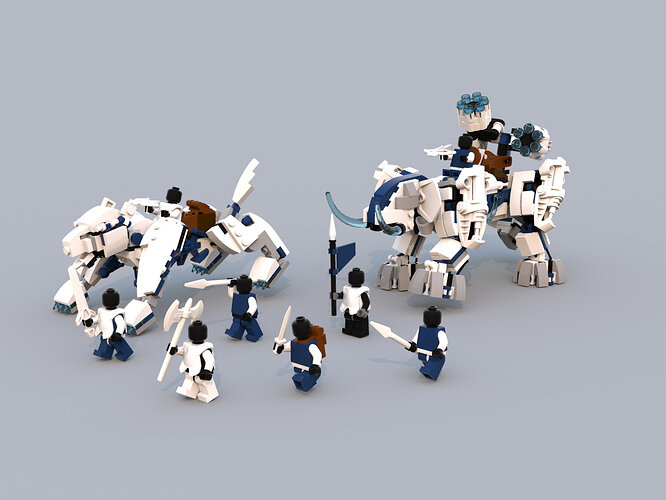 This set has 586 pieces, 8 minifigures and 2 Rahi, like with the previous attack force set, this is meant to be a battle pack, if this is too large however it can also be broken up into 2 smaller sets: The Frost Wolf attack and the Mammoth Guard. The sets would be split with the axeman and the 2 swordsmen with the Frost wolf and the Captain and the 2 guardsmen (spears) with the Mammoth (Khorei from maori “tusk” and Ko-). 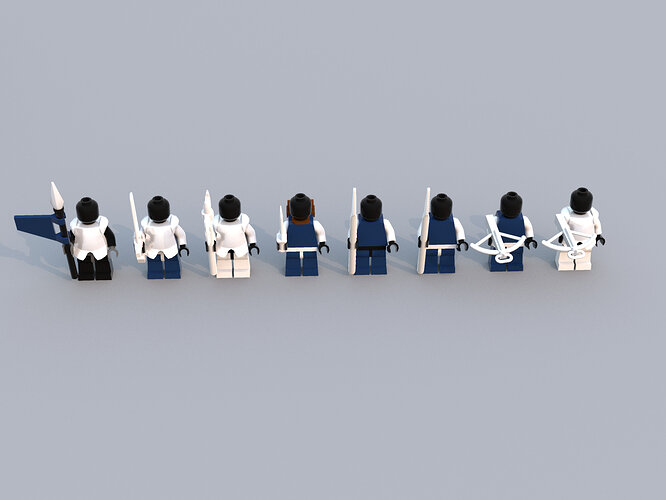 We have the Captain of the Mammoth guard with the signature spear of the captains of Ihu, the armoured swordsman, another axeman with armour, a swordsman with supplies, 2 guard and 2 riders with crossbows although the Frost Wolf’s rider is armoured but carries supplies on the back of his wolf.

So a few of you don’t like the battle pack idea even though I think its pretty cool but based on the piece counts of these Rahi and minifigure costs, it won’t realistically happen. But I don’t care, I’m just here to design kick-a** sets. 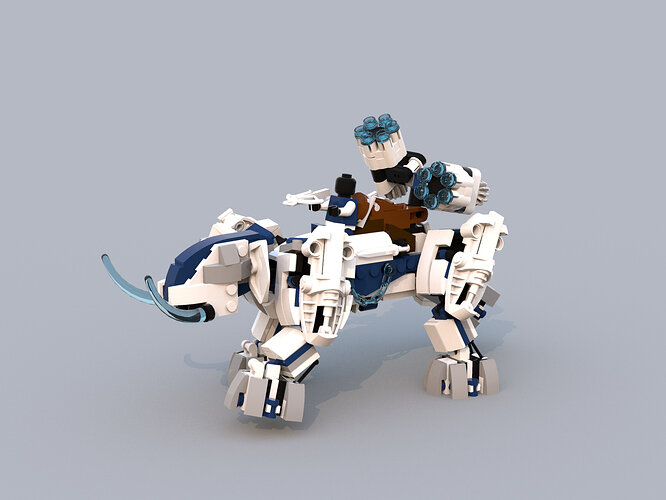 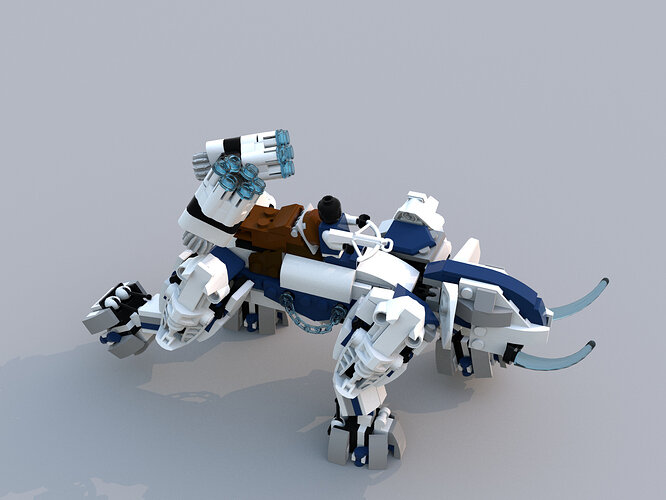 The mammoth, the Khorei, with full articulation in all limbs, including the head and turret positioning, this is an improved, higher piece count version of the Rhuaki, with different armor to differentiate the 2 further. This also has the 2 stud launchers on the back but has a larger range of movement to it’s stone counterpart. The standard lever pistons are also present here and I personally think that they add so much to the Rahi designs. 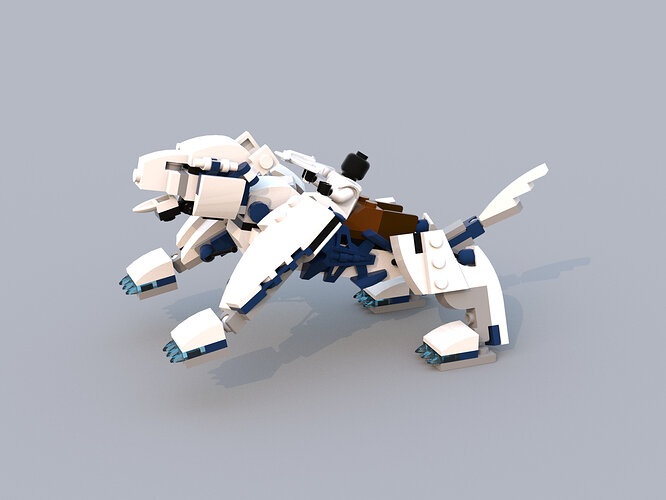 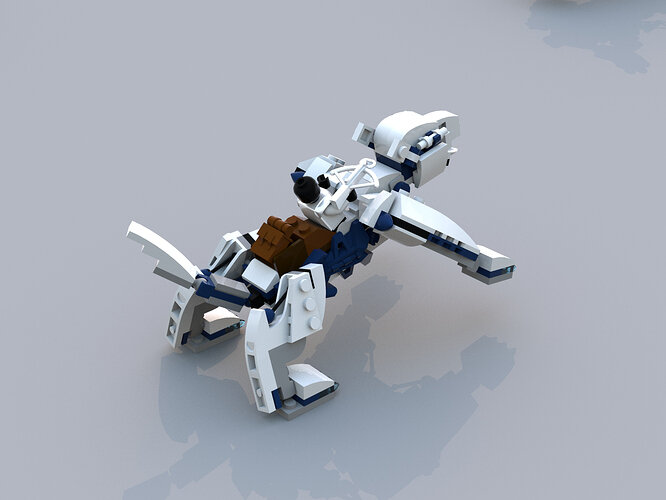 The Frost Wolf was inspired by this Lego Ideas Submission but modified quite heavily, originally it was a bear but the design of Naga from TLOK was much more canine so I just made it a wolf. It has no function but 2 points of articulation in the legs and tail, not being fully posable but still looking quite dynamic, the head is also posable as are the ears and mouth. There is also a small section on the back for cargo such as a backpack.

I’m not gonna rant about battle packs anymore because at the end of the day, this is what I’ve done, I’m happy with it, it looks awesome in my mind and even if Lego wouldn’t sell it, it would be a great set IMO. The Wolf, while not very original I’ll admit ended up pretty good, I can’t really say much though as a majority isn’t my design just a few style changes and add-ons. The Mammoth however is my pride and joy, with it’s tusks of ice, very dynamic posability and awesome lore potential, I think regardless of the canon of the sets, it will remain canon.

As always comments and criticisms are welcome!

Only issue is that cannon wise for now, there is only one rahi type that can survive in the Ihu region. So they either change the cannon or we replace those rahi.

I feel like these are too Chima-esque. Maybe use more CCBS for the animals, sort of like LEGO does for mechs.

Do a Battlepack for Vo-Matoran! Just cause I like purple

@odnanref101993 I’ve seen that, “packs of muaka on the outskirts”, so tiger packs can survive but not wolves and mammoths? I find that a little unlikely and I think the lore should get a little change in respect to that.

@Jakanader I’m focusing on brick built animals and I’ve found that CCBS doesn’t convey a solid looking animal as well as a system/technic mix. Whilst the ball joints are better they limit customization and also increase the physical size of the moc, smaller bone pieces limit customization and custom limbs increase complexity and piece count. Not to mention that small Rahi would become impossible. So IMO these are fine, yes they look a bit like Chima, but that’s not exactly bad is it?

Chima had animal themed vehicles and animal designs, Bionicle had Biomechanical animals, they were going to look alike anyway, even if I used CCBS.

@ToaNoah_Wafflemeister I need to do a tally on how many battle packs I need to make but you’ll get your Vo-Strike force, I’m thinking a small speeder with a tesla coil maybe?

@Kardax
I agree with you here. I have to mention the Lore conflict though. So that the cast can rectify their mistake, when they read it.
Been looking at all the set, and man, they are big and they give a sense of the epicness you had in the lord of the ring fights.

I think I’m kinda applying too much Lord of the Rings to these sets, may have to scale down in future.

There is no conflict!

Now give me my Ihuan battle pack.

Ffffffffine. The wolf rahi could have more of an elbow angle in its front legs.

Now give me my Ihuan battle pack.

Ok, would you like elbow sauce with your Battlepack meal sir?

At least give all of them elbows/knees.

Yes please, but could you hold the stud shooters on the Battlepack? They tend to detract from the overall flavor.

All right sir, your total comes to $10.50, may I present the Wolf Sentries: 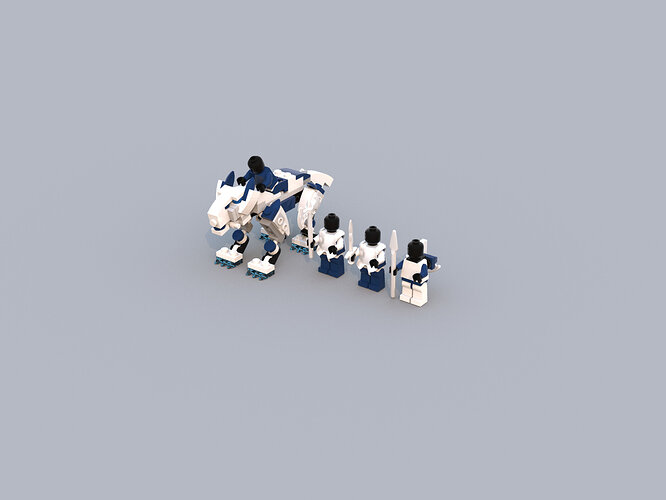 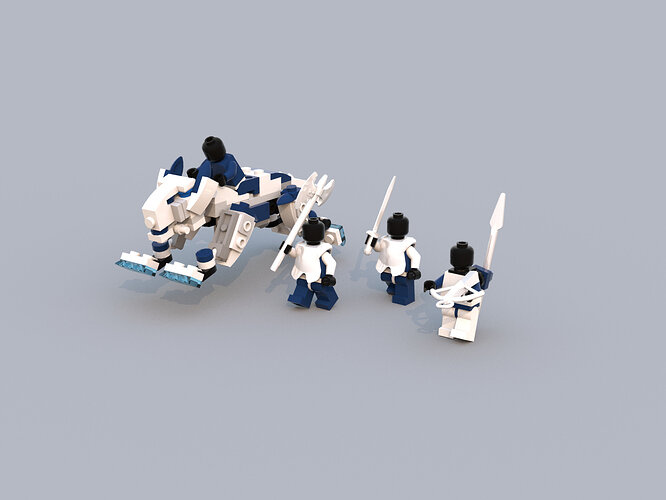 Featuring a younger Frost Wolf and a rider, an Axeman, a Swordsman and a Spear/crossbowman. With a piece count of 105 this set could certainly sell in the $10 bracket, the minifigures are fairly simple, the most complex being the spearman, with a clip on the back to swap his weapons.

Thank you very much sir. Drives away

Now this seems like a bionicle set. I think you should use a rendering program that allows you to add custom prints, so you can add more of a technic feel.

I present the Wolf Sentries:

You should probably add them to the main post so that TTV notices.