Inside the Mask of Time [Pitch, Plot, Story]

TL;DR; A look to what the wearer of the Mask of Time sees, their abilities, and significant elements within the mask’s world.

This pitch originates from my origin story for Tahu, Accelerant. While it has been said that the wearer of the mask would not be able to see when using it, the question came;
“What are they seeing instead?”
So here’s a concept art of the whole scene. 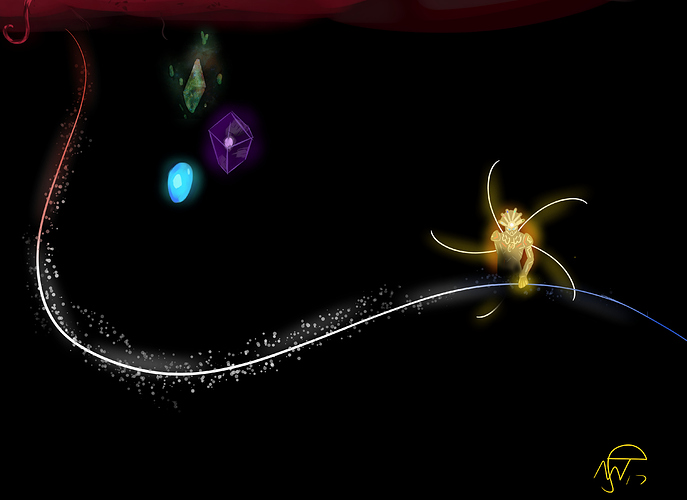 I’ll break down each part;

The Timeline
The timeline is undergoing the Doppler effect; past events are in red while future events are blue. As seen in the picture, there are also many more scenes in the past, as they are events cemented in time. The future only has a few, which are events that are fated to occur, regardless of interference. 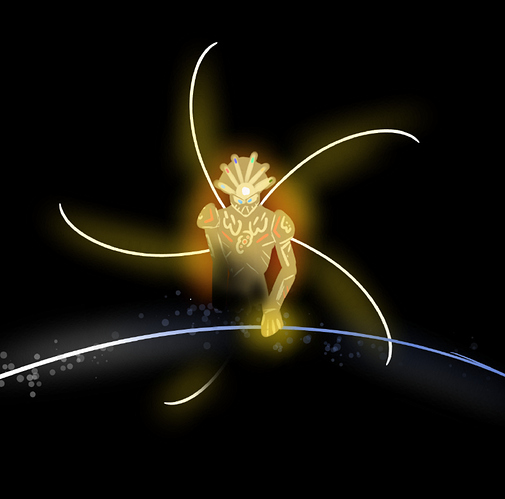 Within the Mask of Time, Tahu’s body takes on this ethereal form; the Vahi is fused to his Hau, he has changed to a glowing gold color scheme, and has strands of time itself flowing off of him. Upon the Vahi are the elements; representing the other Toa who are aiding him in utilizing mask in the real world.
I’ve made some “rules” on how one can operate the Mask of Time at Tahu’s level.
-Holding the timeline; stops time at the current moment.
-Pulling your hand to the left slowly; resumes time to normal. 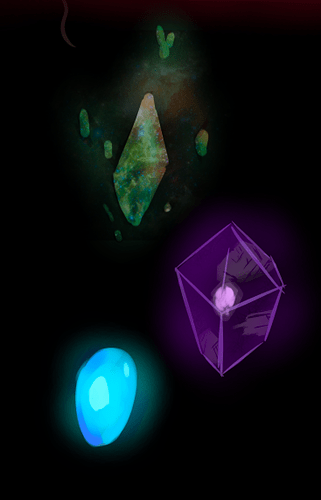 The Life Forces of the Great Beings
Each of these crystal structures represent one of the Three Brothers. Ekimu, Makuta, and Karzahni do not age under normal circumstances; their life energy is separate from the timeline. However, it does not mean they are immune to the powers of the Vahi. The further their crystal is from the timeline, the stronger their resistance is to the effects of time. In this case, Karzahni can withstand the effects far better than Ekimu.

Let me know what you think

But, one more thing… 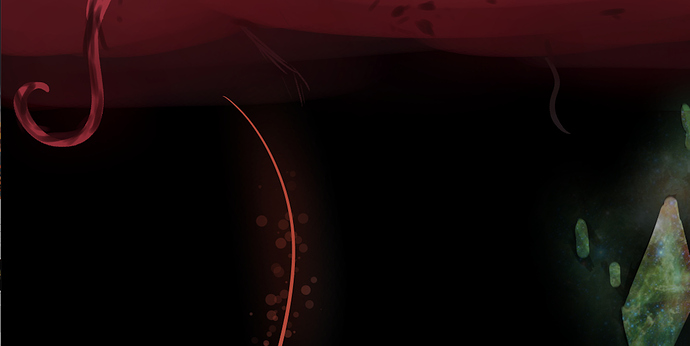 That red thing in the upper left corner.

I heard a deep saying once, from a comedy series on the YouTubes.

"It’s a funny thing about looking for answers, Tahu… sometimes you are far better off not finding them."

EDIT: Adding this idea from the discussion below;

In the picture, Tahu’s ethereal form has the Mask of Time fused to his mask. Now, he currently has no mask power when he dons the Vahi, so he can only use the time powers.
However, if Karzahni were to use the Vahi, his Mask of Alternate Futures could come into play too; the same applied to Ekimu and Makuta.

So theoretically; If the Brothers are at their fullest potential, they can do more with the Mask of Time, such as;

Causality Affirmation (Ekimu): The ability to create events that are destined to happen, regardless of timeline interference. Since this is a highly demanding task, Ekimu can only do one event per use.

Reality Overwrite (Makuta): The power to rewrite certain events within the timeline. However, it must be an event that occurs at that moment; no past or future events. While not as energy-consuming as Ekimu’s power, Makuta would need high amounts of stamina to constantly overwrite.

Alternate Reality Manipulation (Karzahni): Can control the passage of time in other realities, and possibly even enter the alternate timelines. While the Great Being’s life forces are separate from the passage of time, Karzahni cannot come into contact with the next timeline’s Karzahni; otherwise they would violently fuse and destroy each other.

These special abilities are granted only with the legendary masks. Weaker masks will have no change to the Vahi’s uses.

I’m just throwing theoretics out there; I don’t think these would ever occur in the actual story, or at any point in the lore.

Do that red thing in the top corner be a red tentacle? As in Tren Krom, the most famous of the red tentacle people in Bionicle G1?

"After the doctors and nurses had left, I whispered an awestruck question:
‘Good God, Manton, but what was it? Those scars— was it like that?’
And I was too dazed to exult when he whispered back a thing I had half expected—
'No—it wasn’t that way at all. It was everywhere—a gelatin—a slime—yet it had shapes, a thousand shapes of horror beyond all memory. There were eyes—and a blemish. It was the pit—the maelstrom—the ultimate abomination. Carter, it was the unnamable!’"

Yeah it’s probably Tren Krom. But honestly I’m now finding that it’s cooler to just be this unnamed horror; untouched by time and space, beyond comprehension for anyone on the island.
… Well, save one.
EDIT As of Brainstorm 3, Tren Krom’s namesake is taken. So now it’s definitely remaining unnamed.

Or just a phantom threat pushed to the side, such as with this image.

This pitch doesn’t follow the lore set by the Kal pitch; in this case, Karzahni is the only one aware of this thing’s existence and what it possibly entails. Plus, it’s probably a factor of how he lost his mind; seeing this huge organic mass taking up a region of space, composed of a red fleshy substance that sometimes look like screaming faces, in addition to the ability to deteriorate ones’ mind just by looking at it.
And it appears in every. Single. Timeline.
Right at the beginning.

-Pulls towards oneself; erases time. It just works.

Well when you see time as an entity (a string or other object), it now has matter that makes it up. And anything with substance can be erased if there’s a transfer of mass and energy. So once time becomes tangible, it can be broken.

I just watch the entirety of Steins;Gate for the first time on Saturday, so my brain has already been through the confusion that time creates. In that show, multiverse theory plays a big part, so thinking of the Vahi like this could mean that you erase an event from one timeline, to have it appear in another that didn’t originally have it.

Sorry to burst your bubble but he was referencing this video 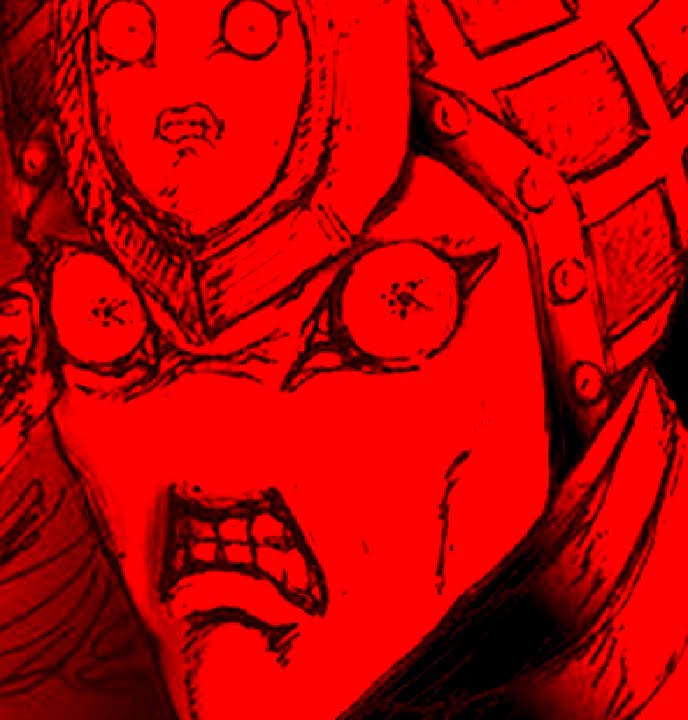 But hey that’s a neat explanation for it. Steins Gate looks interesting, I’ll have to check it out at some point.

BTW kudos to you @Peelacar for making me almost choke on my drink while reading your post.

I really like this art work, but I don’t think that the whole grabbing and pulling thing really works because how is Makuta’s Cell locked in time if no one is using the Vahi? I think maybe the Rahkshi should damage the timeline, and Tahu should just straighten it out, which also fixes the small damage that was done to contain Makuta.

The effects of the mask are still active even if you stop using the mask. It’s like a TV remote; you can pause the movie and put the remote down, but the movie is going to remain paused. Until something undoes the action, it will remain in effect.
In the case of Makuta, he was frozen in time in this isolated tomb. Then the Rahkshi freeze the entire island, so both the island and Makuta are in stopped time. When Tahu uses the Vahi, the unfreezing releases both parties.

Ok. Thanks for clarifying.

I think the pause/unpause is an excellent way to explain the freezing/unfreezing of time and could theoretically work.

On the other hand, I don’t believe time can be changed. What I mean by that is that events in the past are unchangeable and so are those in the future. We know what happened in past so we cannot change it because we are the products of it. The future is unknown and we direct it but ultimately it is going to happen only one way. We seem to be on the same page here.
We could say changing an event creates an alternate timeline but that doesn’t really change the main timeline but rather vers from it. Therefore, I don’t believe you can travel back in time unless you are there according to history and an event cannot be erased from time but it can be erased from the memories of those in the present (present time respective to the user of the mask).
Erases time ≠ works - but - Erases Memory of time = works. At least this is how I can see it.
Thoughts?

I think the past is fixed, but the future can be changed based on actions in the present. Otherwise, the Mask of Alternate Futures doesn’t hold much weight.

I believe the Mask of Alternate Futures shows all the possible futures based on the decisions made in the present, kind of like weather models. This was why I originally thought Karzahni went insane because there was a pretty clear future until Matoran were given free will and the possibilities became essentially endless.
So there are many possible futures but ultimately just one.

@RAKRONDEWL Yeah I agree with you on erased time; I admit I was getting time power ideas from Jojo’s Bizarre Adventure, and “erasing time” works exactly how you described. Question is that is the wearer able to do things within erased time, or can they only erase the moment?
Also, I see we’re starting to delve into time-travel and branching timeline shenanigans, which I really don’t want G3 to go into

For the sake of maintaining everyone’s sanity, probably only the time-stop should be used in the story.

Question is that is the wearer able to do things within erased time, or can they only erase the moment?

I would say only if they were there because everyone in the past prior to the erasing in the present would remember that moment. So probably only erase the moment.

Also, I see we’re starting to delve into time-travel and branching timeline shenanigans, which I really don’t want G3 to go into

For the sake of maintaining everyone’s sanity, probably only the time-stop should be used in the story.

For the record, I hate time-travel and branching timeline shenanigans and full heartedly agree that they should be avoided for G3.
We are on the same page.

I was wondering if the five lines on Tahu’s back are representing the other five Toa, helping Tahu use the mask?

Yup, you are correct.

HOORAY FOR ALMOST MURDER[quote=“DarkMaestro, post:8, topic:40442”]
BTW kudos to you @Peelacar for making me almost choke on my drink while reading your post.