Jacob kinda skids to a halt, a little taken aback. Hardly a criminal mastermind, but not even much of a fighter? Something about it doesn’t feel quite right to him. Still, he could just tell him to stop if he caught it in time, perhaps.

“Uhuh, we’ll see about that…” He mutters, his eyes boring into his target’s as he imperiously utters: “Put the bag down.”

The robber’s eyes seem to lose focus. Maybe they’ll think I’m serious if I put the money down? That seemed like a good idea. Very good idea. He slides the bag off his shoulder and throws it in front of him, an almost robotic motion, then returns to the pose he was in before.

Manpower hit his blinkers on, before turning to a nearby gas station. situating the vehicle next to a gas pump, he put the van in park, before opening the door.

Runa’s ship lands and he boards into the back. He detaches Judgement from his arm and reattaches his normal arm. Then, he closes the back hatch and turns on Excellerator’s cloaking device. He then pulls out a first aid kit and starts tending to his wounds.

Adam Stone or Cellulitis as he is known patrols the streets. His appearance was almost completely average. excluding the gas mask and welding goggles. He ventured through the dark alleyways, pacing around the city, waiting for his chance.

Todd watches the thief and laments the situation. The thief had obviously surrendered without a fight, and there were two many people around for him to get away with the usual. “Uhh, stay there until the police show up. Don’t try anything funny.”

The thief nods earnestly. He takes half a step back.

Todd takes half a step forward to maintain the same distance. “Don’t try running either.”

“I dunno, I think he’ll probably be alright. I could make sure, if you want?”

Meanwhile, in a derelict storage facility nearby, Rico Rodriguez was waiting for his clients to arrive, clutching a very important metallic briefcase nearby. Armed thugs were stationed all around the warehouse’s inside and outside. Eventually, Rico’s guest had arrived. “Ey, amigo! You finally came, huh?” Rico exclaimed, straightening his suit as he stood up to greet his client. “Enough with the introductions. Do you finally have it?” The client asked, motioning to Rico’s briefcase. “Ey, I got watch you need.” Rico said, putting the briefcase on the table and sliding it forward. “Good things come to those who wait.” Suddenly, an armed thug in the corner was yanked into the shadows. The guard next to him spun around. “What the heck-” He was pulled into the shadows as well. The guard’s gun had fired a few pullets, but then it went silent. “What is going on?” Rico said, standing up. He pulled out his walkie-talkie to check on the guards. “Talk to me. What’s happening?” There was no response, only static. Suddenly, a dark hooded figure dropped down on the meeting table. The client stumbled back. “Please, i-” The figure twisted the client’s neck in one swift motion, killing him instantly. Rico was the last man standing. He pulled out his glock and attempted to shoot his assailant who so rudely interrupted his meeting. The hooded figure caught Rico’s arm, and his gun shot up into the ceiling. The figure smashed Rico in his ribs, knocking him to the ground. A black pod fell from the figure’s coat onto the ground, spewing out a lethal nerve agent. Rico inhaled a large gasp of it, and his body began to suddenly freeze up. “I’ll take that.” The figure said, swiping the briefcase from Rico’s clam my grasp. Rico tried to respond, but was incapable of speaking at this point. The last thing Rico saw before death was a long beak sticking out from the figure’s hood as he turned on his heel and left.

Later, everyone in the city of Heroes would see a news report of the events in the warehouse. “Last night, bio-terrorist black market dealer Rico Rodriguez was found dead, along with several of his armed guards in a warehouse. An autopsy report found a lethal nerve agent in his system. Along with this, a strange symbol was found branded on his forehead: 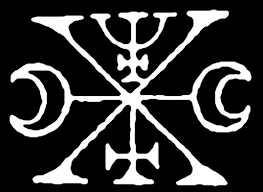 Many similar deaths have been reported in the past few weeks, all in some way tied to bio-terrorism. Authorities are unsure of what to make of this.”

Once enough time had passed, Runa had tended to his wounds and made progress on some Projects he had in the works. He headed towards where the attack had taken place, while the AI in his mask was tasked with searching for the meaning of the symbol that had been shown in the news reports.

Cellulitis stares at a TV, displaying the news. He noted all the information in his head, engraving them like a scar. He took off for the location mentioned on the newscast. He would get there by his Buick Roadmaster, a pearl blue classic. He takes down the road heading to the location of the bio-terrorist attack

When Cullullitis arrived, he would find some police tape around the area. If he ignored it, he would see barely any trace of the crime. However, there were the bloodstains of the victims splattered in some areas.

Once he arrived, Runa looked around. He inspected a bloodstain, then took a small sample of the blood to take to his lab to analyze the toxin. He keeps looking around for more hints as to what happened.

OOC: What does that symbol mean? The first pic was the alchemical symbol for diamond, but I can’t find this one with a reverse-image search.

IC: A figure walks around the outskirts of town, parts of his body occasionally pixelating, with some pixels even floating off of his body, and returning to normal within a split second every couple of moments. He watches his surroundings, looking for…something, it seems.

“Uhh, sounds like a good idea. We should probably call the police too.”

Cellulitis ignored the police tape, he studied the bloodstains and their locations, trying to see what the environment could have down to change or decide the outcome of the attack.

OOC: @Runa It’s the Seal of Murmur. That will get you a better idea search result.

Runa looks up to the ceiling to look for holes people could have dropped through after he puts the blood sample into a small storage port on his right arm. He turns to see Cellulitis. “And you are?”
His Mask gives him the results of “Seal of Murmur.” He instructs it to go more into depth about researching it.

The man came across a construction site. He smiled a wicked smile and walked up to it."

Cellulitis responds, coldly. His face was hidden behind his gas mask and welding goggles. Not much or nay of his identity could be made out, and his clothes bleed right into the civilians, it would be hard to tell him apart from his clothes alone.
“Someone who doesn’t trust a lot of people…So I tend to do work for them, even if they don’t like it. Clearly this case is out of my range. I’m taking my leave…wait you have a blood sample, mind sending me some blood results. I could use them to test for any infections…”
His clothes were completely ordinary, except his mask and goggles. He wore a grey hoodie, blue jeans and red tennis shoes and he held a navy blue shoulder (duffle bag) bag under his shoulder.

Dave grabs his long coat, and shifts his form to hide his wanted identity before heading outside, and flipping a coin in his mechanical hand as he did so