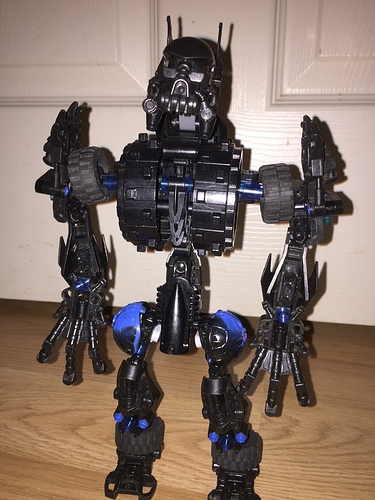 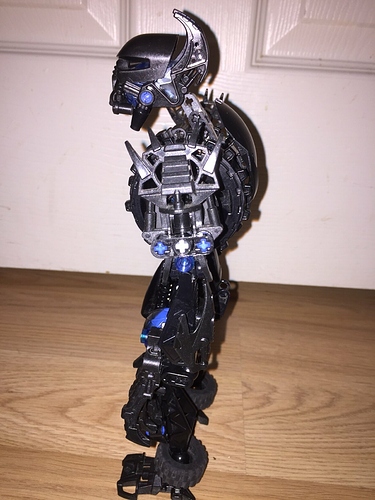 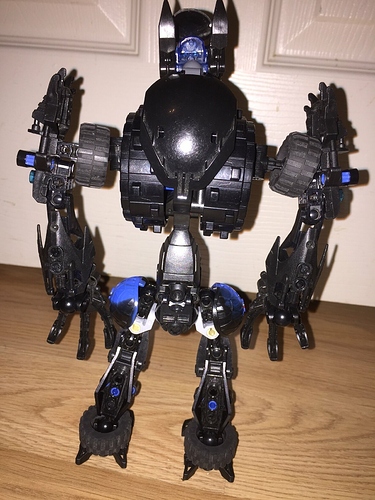 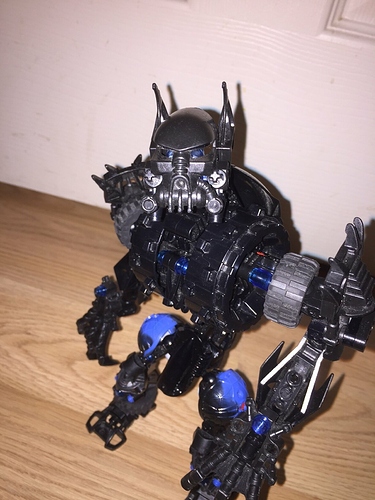 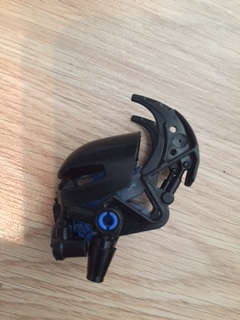 Story: Boldorah was never interested in leading. For a long period of time, he made no attempts at communication with the matoran that occupied his island. Boldorah did exactly as he was supposed to, creating rahi, and he resented it. He was a deeply logical being, which only amplified his hatred for his work. One day he couldn’t stand it any longer, and decided to perform a small experiment on a group of Rahi. He continued to perform small experiments, which helped keep his mind occupied. He grew more and more intrigued by the land around him, especially by the rainstorms of the island. He used his power of weather control to do some basic experiments on the effects of large storms and their effects on rahi. Eventually it got to the point where the spent more time engulfed in storm than not. Boldorah had mostly viewed the destruction this weather was creating as points of data, until one day he realized that the island was in shambles. Boldorah mildly guilty about what was happening, but more so he recognized that he would have to stop his work if the island was completely razed. And so he stopped using his powers, but was mortified to see that this had no effect. He deduced that he had messed with the weather in his sphere too much, and that the weather would continue like this unless he intervened. Thus he underwent the painful process of creating 42 rahkshi of weather control to control the weather. This plan worked, but had an unexpected side effect: the matoran, who had previously lived in constant fear of flooding, hailed Boldorah as their savior. The makuta initially scoffed at the idea, but then he started to think. He was never one to actively seek power, but the allure was to great. He placed himself at the top of the social pyramid, to which no matoran was opposed to. The island flourished under his rule, and big cities grew along with the matorans admiration for their new leader. Boldorah sided with Teridax at the Convocation, thus avoiding being killed and returned to his island. Boldorah was less than satisfied however. He grew bored or ruling, and so he decided to continue his experiments, but this time he used matoran instead of rahi. He would gather under-performing matoran at his palace and tell them that he was going to give them a better job. He would then proceed to run trials on them, most of which resulted in the deaths of the matoran, to which Boldorah would write down a sentence, plot a data point, maybe state an interesting observation and move on, as he saw them as inferior, and thus had absolutely no remorse for what he was doing. Some managed to survive, and were swiftly forced into labor in Boldorah’s Laboratory. One such of these matoran managed to escape back into the city, and quickly spread the truth about Boldorah’s experiments, and how he had caused everything in the first place. The matoran were furious at their leader, and decided to revolt. Their first action was to steal Boldorah’s protesteel blade from its display in his palace, as it was the only weapon they reckoned could hurt him. Then they formulated a plan to have one group confront Boldorah from the front, and have another group sneek behind the makuta, and stab him with the blade. The plan was put into action, and the first group confronted Boldorah. The makuta was caught off guard, as he wondered why they even bothered attack him when he could so easily kill them. This pause allowed the second group to perform their task. The matoran, having little knowledge of the nature of Boldorah’s species, thought they had killed him. The next day they were surprised to find a raging rainstorm. Eventually they realized that Boldorah must have survived. The matoran decided to lure him out by killing the rahkshi, unaware that Boldorah himself had taken the body of a rahkshi. The rahkshi fought back, but were too powerless to stop the mobs of matoran. Eventually the matoran found the rahkshi Boldorah was in. He revealed himself, and then swiftly killed off the matoran that tried to fight him. The other matoran however went and killed off the remaining rahkshi. It was then that Boldorah realized that he could no longer control the weather. He went and killed off all of the surviving matoran, in a vain attempt to restore order. He stood in the middle of the carnage, as the storm got progressively worse. As he stood thinking, seemingly unaffected by the weather around him, a bolt of lightning struck him, instantly killing him

Looks alright, but the torso, waist and thighs are way too skinny.

Also, why does he share names with the Ga-Metru Vahki?

thanks for catching that, will change!

Interesting. The way you used the Power Miners wheels on the sides of the torso is a cool idea, but I feel as though there are some gaps on the back that need addressing. Maybe add another color as well. The black with blue highlights is sp00ki, but it makes it hard to pick out the individual details. As for the waist, I would recommend using a large tire to beef it up shutout restricting posability too much.

All in all, this is a creative MoC. I like the way you did the horns!

All in all a pretty simple but nice MOC. The upper torso has something unique to it and I like that, the waist however is too thin in my opinion. Try doing something there. If you want to, more customized limbs would also be great, but they’re fine.

As to backstory stuff:

Also a picture of the whole MOC without parts cut off is needed.

I short: do something on the waist, add a backstory and add a better picture and I’ll accept this MOC into the project.

The MOC seems to be better now, but it’s hard to tell because the pictures are so small. Might there be any way for you to post bigger ones?

As to the story… I find it a little hard to believe that a Makuta was killed by Matoran. The first step with the stolen Protosteel blade works for me, as does Boldorah fleeing into the body of a Rahkshi - but that doesn’t make him powerless. He would still have been able to use most of his powers. Also I severely doubt that the Matoran could destroy that many Rahkshi with Boldorah still controlling them.

Also the Matoran being unhappy because they have to work hard for something that actually benefits them is a little strange. Matoran were pretty much created as workers in the first place.

My personal solutions to these two problems would be these:

Feel free to incorporate these into the text or come up with something different that works.

Well, there it is. That took way longer than it should have