Name: Vulon
Species: Makuta
Assigned Reigon: Unknown
Kanohi: Unknown
Other Titles: (Untitled) of the Darkness Three (Can’t think of a good title for her), The Whiplash
Personality: Quick thinker, Arrogant, cares deeply about her ‘siblings’ Fenerak and Adrion
Weapon/s: Lightning Chains (can’t think of a good name)
Status: Deceased
Bio: To be added (Each of their bio’s will be added as soon as Adrion is complete)
Onto the Moc! (Sorry if some pics are blurry) 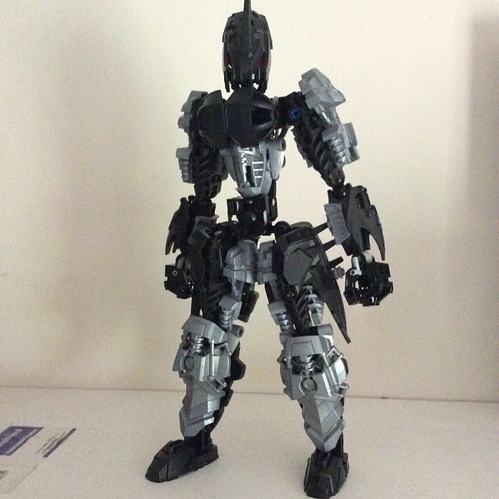 image.jpeg1936×1936 581 KB
Yes, this turned out so much better than Fenerak! But yeah, I’ll let the pics speak for themselves… Maybe 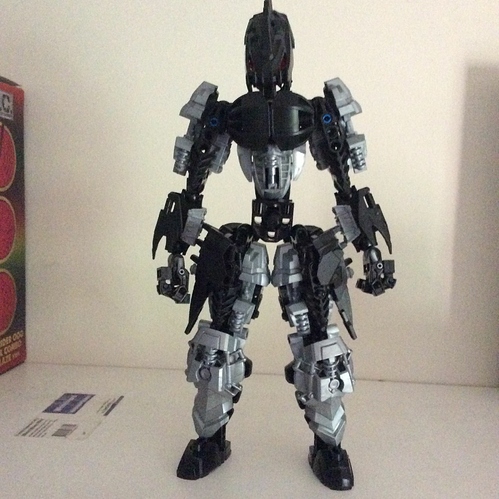 image.jpeg1936×1936 629 KB
So this Moc was the first one I made in months. The idea of these 3 Makuta I’ve actually had for a while, and only with the community project have I been really motivated. 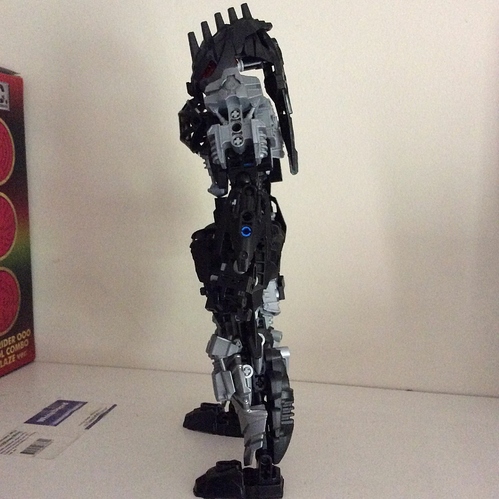 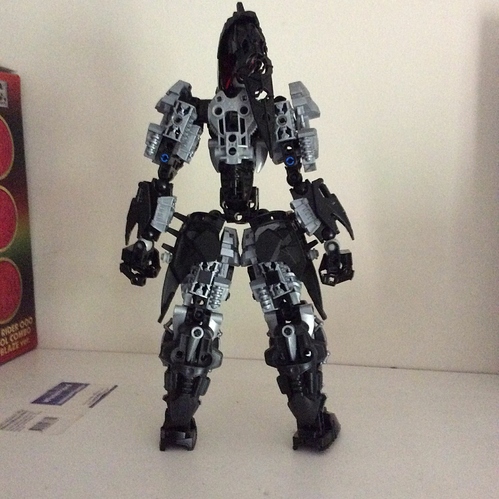 IMG_0752.JPG1936×1936 637 KB
Here’s the back. Unlike Fenerak, I didn’t do any close-ups behind the legs, because the only thing I want mentioned here is the system flat pieces. They’re used to cover up 2 blue pins. Speaking of which, I think they’re better in being ‘less noticeable’ compared to her ‘brother’, and There would’ve been like, 6 more exposed on the back if I didn’t cover them up, so yea 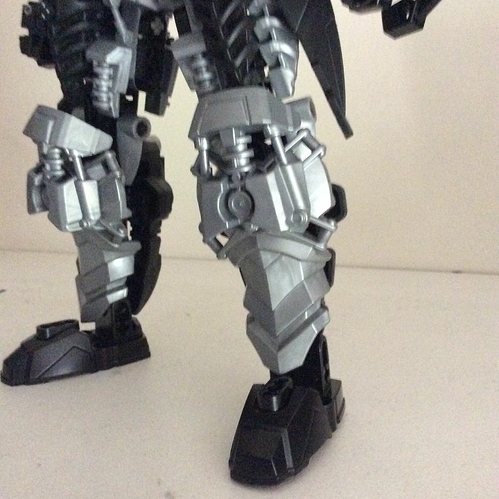 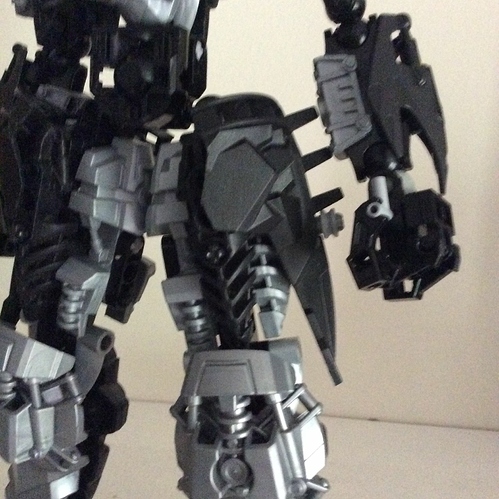 IMG_0755.JPG1936×1936 708 KB
The upper leg. The most obvious thing noticed here is the studs sticking out awkwardly from the Stronius armor plate. This is to secure the armor piece, and actually holds the upper leg together quite well. Yes it’s an illegal connection, but I did it because putting the piece on legitimately would’ve made it stick out too awkwardly, which is why I chose this instead. Now onto… 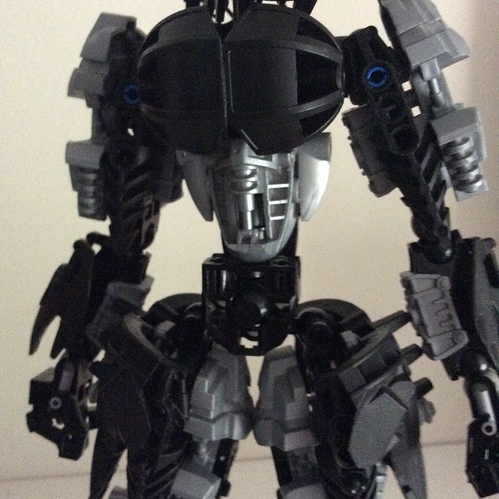 IMG_0756.JPG1936×1936 693 KB
The chest. As it’s shown, I used the ‘Metru Boobs’ design (is it even a thing?). There are actually 3 reasons for this, but the primarily one was to even out the amount of black and silver on her torso. Plus, I think they work really well here in terms of overall appearance. Also, there are some Bohrok Eyes that fill up the inner torso without being connected (soz) 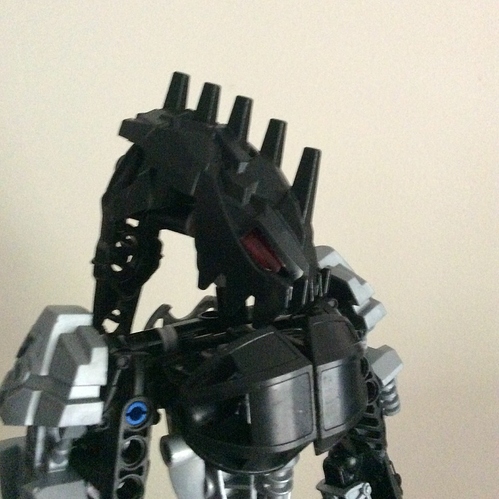 IMG_0757.JPG1936×1936 599 KB
The head. Why the Stronius head you ask? Because I wanted to use the Ultimate Dume head on her, but I didn’t have one, but I noticed strong similarities between it and his head piece. If you’ve noticed, the eyes also aren’t legitimately connected, they’re only held there by friction and some blue-tac (which holds surprisingly well). i also added hair, because I felt like it

. Overall, I really like the head, something I’m really proud of on her, including… 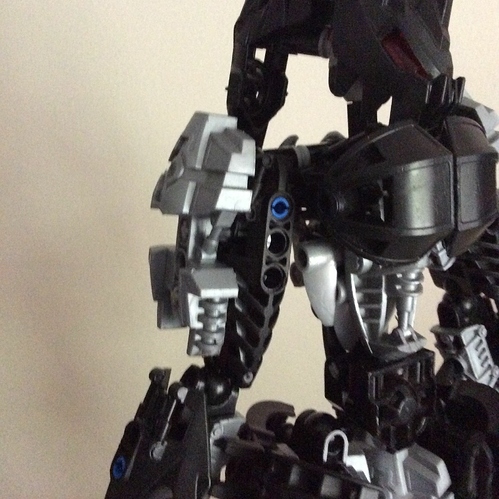 IMG_0758.JPG1936×1936 673 KB
The arms. Something i was really struggling with was the arms. I couldn’t get it to have good articulation because of the bulky upper arms. so then i thought about using 2 balljoints, in the elbows and wrists, and it works so well. No other Moc of mine has the amount of articulation in the arms as this gal, and I just love it. 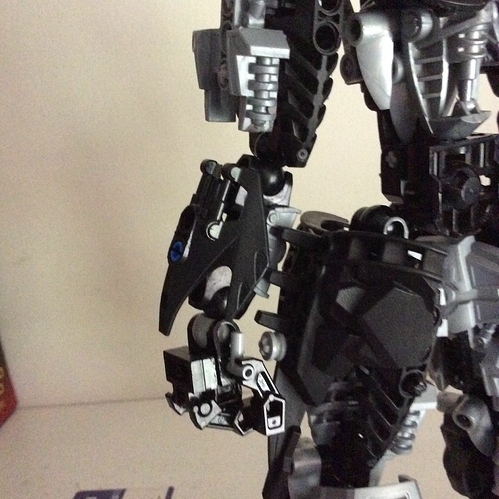 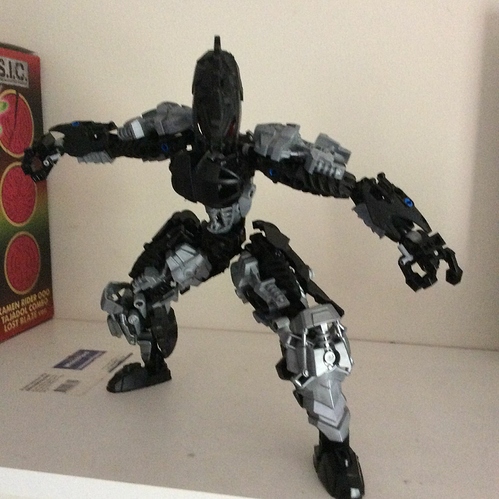 IMG_0760.JPG1936×1936 607 KB
so yeah, the extra joints in the arms allow for her to have more dynamic poses even with the bulky legs, however, due to the area I’m in (my room) being the hottest part of the house, here are some lazy ones instead 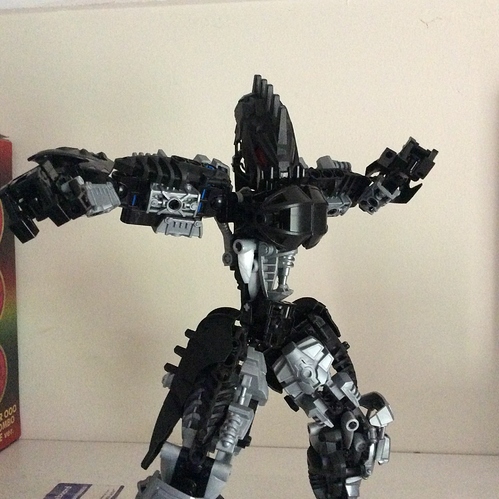 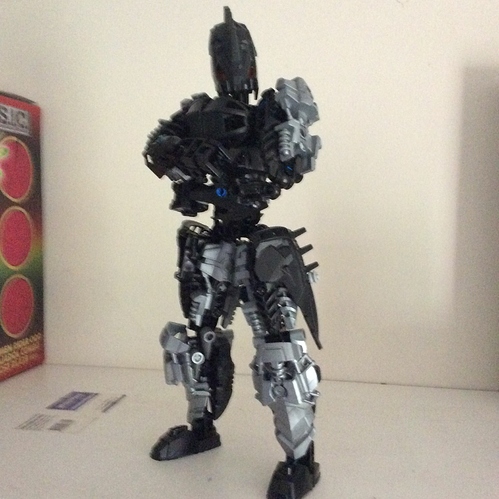 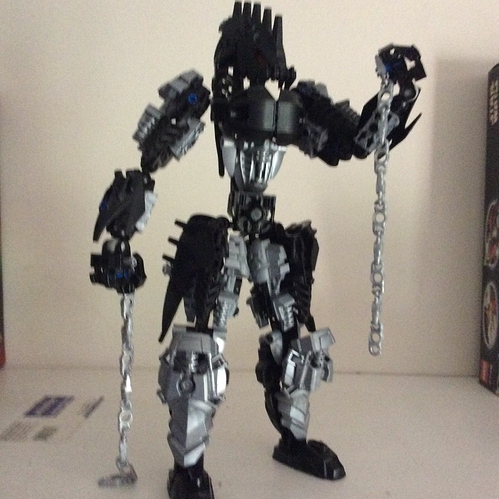 IMG_0763.JPG1936×1936 649 KB
Her electric chains??? Yeah, the idea I had going for her, as stated by her title of Whiplash, that she was going to be the fastest member of the Darkness Three, despite her bulkiness (sort of and irony thing i was going for) and I wanted to give her weapons that could compliment her fast speed. So i thought the chains would look good, and it did, in my mind :D. It didn’t translate so well here, so yeaaaa… 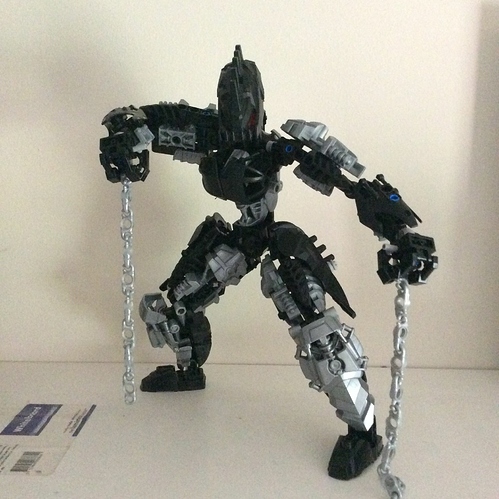 IMG_0764.JPG1936×1936 582 KB
and about the weapons, basically, if she ‘whipped’ a certain object hard enough combined with her speed, the said object would instantly begin to crumple away into dust. But yeah, still not sure about it.
EDIT: It turns out that ‘Chain Lightning’ is one of the 42 Rahkshi powers that has the ability to turn people/objects into ash, so that’s the chains new power 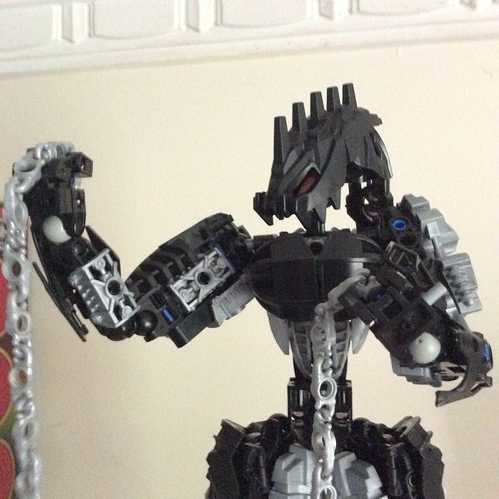 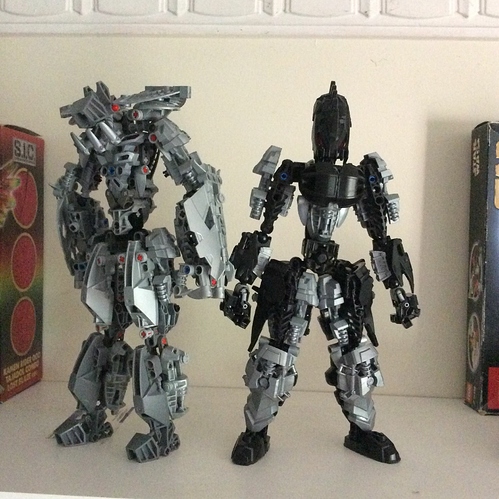 IMG_0766.JPG1936×1936 701 KB
Here’s her compared to her ‘brother’ Fenerak. I like her stature, but with Fenerak, there’s still the issue of his height. He’s basically the same height as Vulon when he was meant to be a large hulking beast, which will be made to his changes whenever I update him. 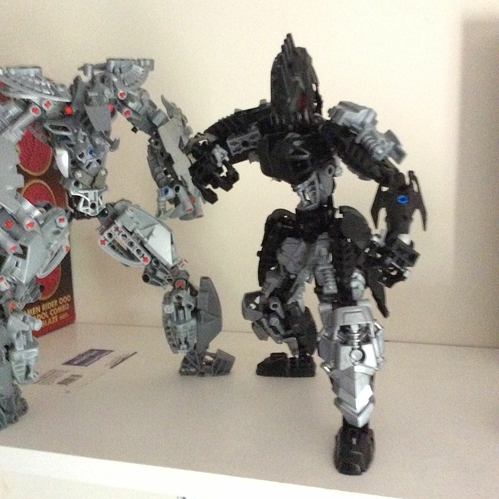 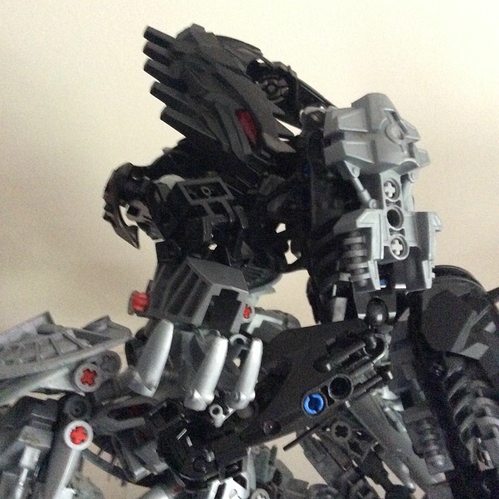 IMG_0768.JPG1936×1936 682 KB
Final pic with Vulon giving Fenerak a… Nuggie? Is that what’s it called? whenever you get them in headlock and rub there heads really hard? Idk, but whatever. So I really like this Moc, and I think is much better than Fenerak. Now about Adrion, he won’t be here for a while, lets just say that

. Anywho, what did you think of this gal? are there any problems with her that I most likely didn’t notice? Tell me! or somethin… you can check out Fenerak here!.. http://board.ttvpodcast.com/t/makuta-fenerak-shield-of-the-darkness-three/17815
18 Likes
Vulon - The Ambasadress (Gilahu's BP Makuta revamps)
The Brotherhood of Makuta - What About a Community MOC Project?
Jemoph January 26, 2016, 6:11am #2

she’s quite interesting and neat! Wish you could spice up the colors, but still fine as is!

Yeah the colors are a bit meh… but i think it looks fine. As soon as Adrion is finished, oh boy his colors are unique

Looks nice!
I really like the head build, although the “Metru Boobs” seem a bit in the way if she wants to look down.
The arms are great, too. You know, I wanted to use more of those ball thingies in the arms for my MOCs, too - but I simply don’t have enough of them (those parts are SO useful!)
The legs are perhaps a little too bulky compared to the rest (especially the pretty thin waist) but looking good.
I feel though, that the spikes on the mask and the thigh armor are a little … out of place? as the rest of her isn’t very spiky. Perhaps it would help to add some more spikes to the Hordika feet on her upper arms …

As to her Kanohi: Just make up some power

And I can now see, why you’re not that satisfied with Fenerak - Vulon really looks much better, great job!

I hope her bio will follow soon! As this MOC gives reference to a Makuta not yet completed, it will be accepted as part of the project as soon as you have finished that last MOC.

Thanks for the criticism! The head, can actually look down more than she can look up!

the legs I don’t mind being bulky, as it’s kinda reminiscent to Chun-Lee from Street Fighter. I think the spikes look fine, though you can disagree

and the Kanohi, I just might make it a Kakama shapeshifted (As, despite her bulkiness, moves quite fast naturally). I have done a sketch of Adrion’s weapon, and will do a sketch of him since I’m kinda struggling with him overall. But I assure, he will be made

I hope to Mata Nui that this “Adrion” is going to have an interesting color scheme. Black and silver is boring, the two shades of silver/gunmetal on your last MOC isn’t that much better. (Disclaimer: This all depends on execution. I think that if you’re on the level of a @Chro or an @Ekorak you could use “boring” color schemes in an interesting way. Point is, you’re not there yet.)

Colors aside … this build is meh. Lots of textures going on, although you did find ways to unite them partially with the similar pieces on the upper arms and upper legs. Forearms look a bit empty. Torso looks meh, either the breasts are too big or her neck needs to be higher up. Will complement you on making red/blue pins a lot less noticable on this one. However, conceptually at least, and to an extent on the build itself, I think Fenerak was a far more interesting design.

Anyway, that’s my long-winded thought process. Seems like you like having criticism, so you’re free to do with this as you will.

Cool design. It looks like it would have some articulation issues in the legs to do the bulkiness of the armor.

I like what you did with the Stronius armor near the legs.

ok, first I’d like to start off saying that this MOC is amazing.
I like the Stronius helm, the basic body shape, and the legs, upper arms and the not nuvaboobs.

I’m not really a fan of the pelvis area (it looks about 1-1/2 pegs too far back), wrist gap and chains.

The color is bland-ish, but works well here

My only real worry with the design would be if it impeded articulation, but I think you stated that she has a decent range of motion.

Love, love, love! I can pretty much sum this MOC up with these three words.

Keep up the good work!

Honestly, the only flaw I would really fix is the blue pins on the arms, but it’s so minor there’s no reason to even bother unless you’ve already got the parts in black.