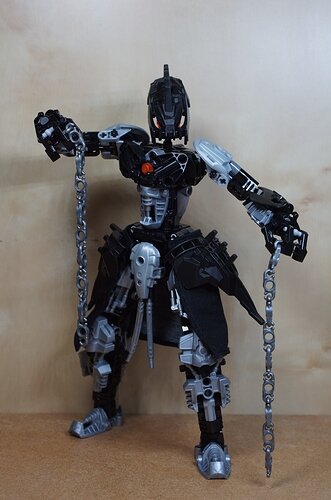 Backstory:
On first glance, Vulon seemed like a spectacularly bad choice for the post of the Brotherhood’s Head Ambassador. As a former warrior she was used to crush her opponents, not exchange pleasantries with them, to take what she wanted, not to participate in endless discussions about trivialities, to dictate, not to listen. Her fiery temper, coupled with impatience and the opinion that all other species were inferior to the Makuta only added to the picture of a diplomatic disaster.
In fact, the only reason Vulon was assigned the position of Head Ambassador was simple – she was the only one who applied for it after Tagah’s death. this gave Miserix not much of a choice – especially since the Brotherhood was in serious need of an ambassador after the war with the Barraki that shook the entire universe. What Vulon sought to gain from the position was also fairly obvious – a higher position within the Brotherhood and the opportunity to give some of the stiff-necked politicians of the universe a proper dressing-down.

Vulon of course wasn’t completely unqualified for the job – she had quick wits and a sharp tongue and wasn’t someone to easily back down from an argument. Still, her first few meetings with foreign dignitaries couldn’t be called very diplomatic. Two ambassadors she reduced to shivering pictures of misery, fearing for their very lives, another one she threw out a window after he kept arguing with her. In all of these cases she managed to secure the Brotherhood’s interests, but both Miserix and Teridax realized that before long the Brotherhood’s image would suffer from Vulon’s actions. After a few disciplinary measures, Vulon was thus partnered with Fenerak, another warrior who was known for his calm nature and calculating intelligence. Vulon was not very pleased to have to share her position at first, but it quickly became clear that Fenerak was content with only throwing in a word here and there and keeping Vulon back from doing something… undiplomatic, while otherwise letting her handle everything. Indeed, the two of them complimented each other perfectly, making them a very effective ambassadorial duo.

At the Convocation Vulon sided with Teridax, correctly guessing that her job would go more in the direction she preferred under his rule. Fenerak, as inscrutable as ever, joined her without a word. Under Teridax’s rule the pair worked on slowly undermining local politics to the Brotherhood’s benefit, while also dealing with political crises. It was during one such, later to be known as the Avohi crisis, that they came to North Avohi to talk to the ruling council about border disputes with South Avohi. It was their bad luck that just at that moment an attempt to wipe out North Avohi’s rulers triggered. Fenerak went down under the collapsing roof of the council hall, while Vulon barely made it outside before being killed by South Avohi’s assassins who were meant to make sure that no one escaped.

The assassins never realized that two Makuta were among their victims – they hadn’t been aware of Vulon and Fenerak visiting that day. Teridax was furious when he learned that two of his most useful brethren had been killed without any purpose, yet the death of two Makuta gave him the political right to make the Avohi Crisis personal. Sidoshi and his strike team visited the ruler of South Avohi only a few days later while the Brotherhood military made sure that South Avohi would remember what happened to those daring to strike at the Brotherhood of Makuta.

Equipment:
Vulon wore the Kanohi Mautatu, Great Mask of Charisma, which let her influence others to more easily agree with her. Since using such a mask is considered very rude during diplomatic meetings, Vulon wore hers shapeshifted into a unique form to make it not easily recognizible as what it was. She also didn’t actually use it during work, since it would have made her victory in a debate less genuine. (Sometimes she did use it, though.)
Vulon’s weapon of choice were elecric chains. 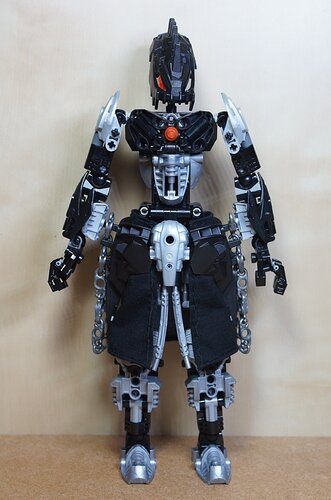 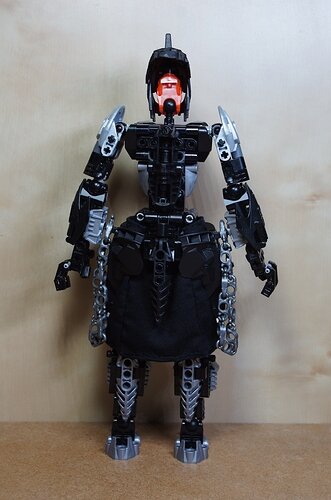 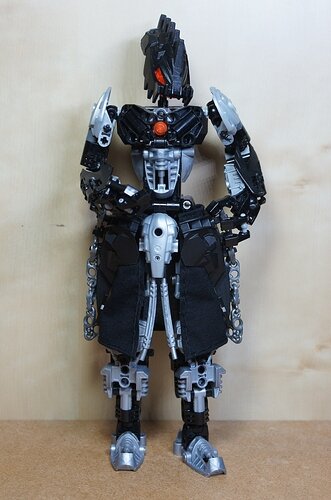 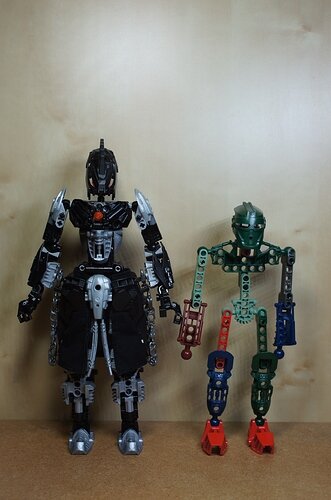 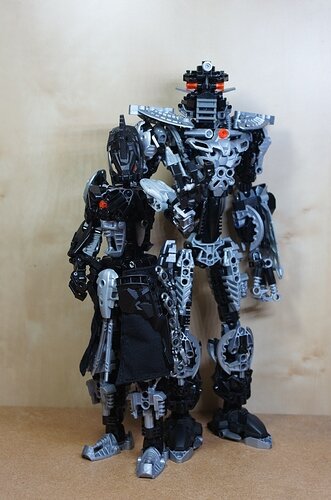 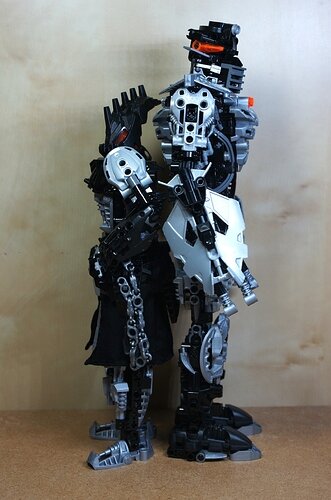 Well, this took long enough. Mostly because of me procrastinating endlessly to get that skirt done. I should really use less cloth… on the other hand, using cloth works well…

Anyways the main thing of this MOC is the skirt, of course - armor plates over cloth. Turned out reasonably well, except that the armor had to be attached so high up that I can’t pose the legs too much or it’ll look odd. One reason why I wanted the skirt - it obscures this fact somewhat.

Otherwise nothing too special here, I guess.

MOC is based on @AdamusTheFirst’s Makuta Vulon. As there wasn’t much backstory on her, though, that’s mostly made up by me. Since you probably also can’t see the pictures in the original topic anymore here’s Adamus’ original: 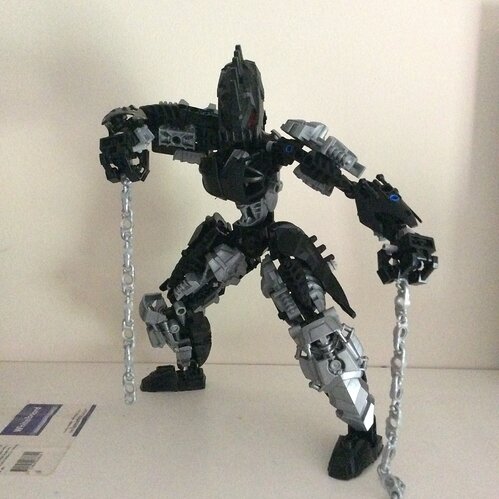 Nice… i love those whips/chains, and the feminine figure. Very well done!

The Stronius head doesn’t really work for a female character, but other than that, great work!

Very nice update on my creation! I really dig the shaping done on the torso, as well as the design of the skirt;
though said skirt makes her have less silver than I would like, but that doesn’t detract too much from the rest of her design. Tho part of me misses the Hordika legs on her arms that not only helped bulk them up, but it unified with the design of the legs. That, and I personally prefer the legs of the original

It’s my personal favorite revamp of the 2, and though I am bias towards the original (since I am far prouder of how original build turned out than Fenerak’s), this is probably the better build objectively, especially since the original skirt was a loose, illegal connection

Funnily enough, the way both characters are written is basically the the opposite of how I envisoned; Fenerak would’ve been more of a brute and Vulon would the cold and calculated one🤣

I should definitely revist these 2 at some point

Tho part of me misses the Hordika legs on her arms

Originally I planned to use Hordika feet on the arms, but it turned out that the pieces were simply too large for the scale I was going for.

especially since the original skirt was a loose, illegal connection

Wait, you mean it actually was a skirt?

My approach was “there’s no way I can fit these Stronius armor pieces on the upper legs in the scale I’m going for, so what about a skirt”.

I also agree with the comments here regarding the comparison with the original - I, too, feel like this is really just a revamp in my style instead of an actual improvement on the original, because I really like the original, too.

Funnily enough, the way both characters are written is basically the the opposite of how I envisoned; Fenerak would’ve been more of a brute and Vulon would the cold and calculated one

Though at least for Fenerak I can say that the entry made it seem like his violent nature derived from his mask - something which wasn’t possible anymore due to his mask power being changed.

How many more Makuta do you need to revamp?

How many more Makuta do you need to revamp?

I keep the number updated in the project topic - currently 84.

Are you going to keep them all? Having 100 MOCs at the time sounds like a lot for me. I am hoping to see a ‘family picture’

Are you going to keep them all?

That’s the plan, yes - otherwise what would be the point? But yeah, I’ll need to figure out a way to store/display the MOCs at some point. My current storage box can only fit about 60-70 is my guess.

And you’ll definitely get a picture of all of them if I manage to actually finish all the revamps.