My Team: the Toa Rode

Since my Cliff Screecher got such a positive response from everyone here, I figured I might as well jump in and introduce you to my Toa Team - the Toa Rode! There’s eight of them, so I decided to save space and make one big post for all of them. 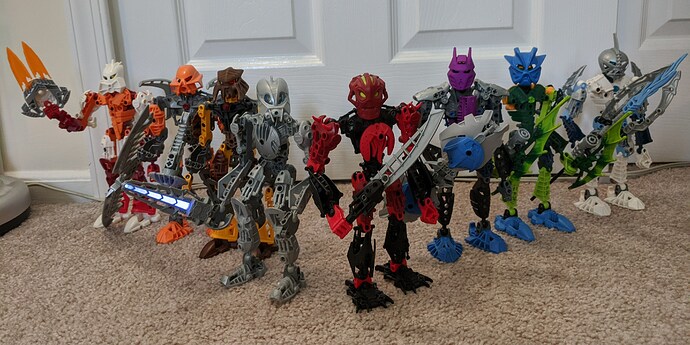 The Toa Rode (loosely “True Heroes”) were formed shortly after the Reformation of Spherus Magna with the aim of helping the Matoran and Agori integrate into a peaceful society. They helped to build a large village called Spero - the Agori word for hope - and they defend it to this day.

The Toa Rode is made of eight members (from left to right): Solra, Ferrik, Grivon, Kahfen, Gahla, Nuto, Vilkin, and Kryon. If I had to pick one as my self-MOC, it would be Gahla. Yes, they’re all Inika builds. TBH, I don’t understand why Inika get so much hate.

If you’re still here, thanks so much for reading! I hope you like them!

Honestly being Inika builds they are a bit plain. But the colour choices and thought put into their features is nice. The outdoors backgrounds are also lovely, moss always looks right and the frozen pond is unique from just snow.

My favourite besides Gahla (I like his colour blocking and I have a weak spot for Jaller Locobolts face…) would be Nuto, the shoulder pads and purple part usage makes him stand out. But it would be great to see some more purple introduced elsewhere and general tightening up of all their colour schemes. But I am sure part limitations are an all too real problem like all of us so no biggie.

Very nice. Some of their colorschemes could use a little tweaking, but altogether they seem like a good start.

these look pretty cool, but the are all
really simple.
i like the shadow one the best.

Honestly being Ignika builds they are a bit plain.

I wanted them to all have similar builds, being on the same team, and I have an absurd number of Inika torsos, so I figured I might as well make use of them. Also, Nuto literally has all my purple pieces, LOL.

these look pretty cool, but the are all
really simple.

Thanks. Honestly, simplicity was my goal here. I don’t think Toa need to have overly complex builds. I’m glad you like them!