I promised a while ago that I would post the Dark Hunter that I featured in my Cliff Screecher MOC, so here he is: 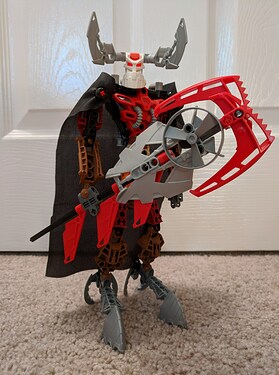 Toros was originally an Artakha Bull who was captured long ago and kept in the Onu-Metru Archive. Due to a faulty Stasis Tube, he was able to escape. He rampaged through the Archives, freeing several bovine Rahi along the way. During the escape, he ruptured a power line that held Energized Protodermis. The strange substance killed all the escaped Rahi except for the Artakha Bull and a Kane-Ra, whom it mutated into intelligent, humanoid forms. They escaped Metru Nui and joined the Dark Hunters. The Artakha Bull would name himself Toros and the Kane-Ra would come to be known as Charger.

Toros is highly intelligent, a trait that allowed him to quickly climb the ranks of the Dark Hunters. He is larger and stronger than a Toa, and can outrun most Toa and similar-sized beings. He has the ability to create, control, and absorb heat. However, he cannot control fire. 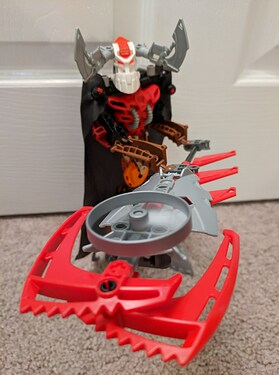 Toros carries a Thermic Battleaxe, which was mutated from a pipe that he used as a weapon during his escape. It allows him the channel his heat powers; without it, he can’t access them. He had a Rhotuka Launcher installed in its head, which allows him to fire his Warp Rhotuka. Toros can fire his Warp Rohtuka at empty air and detonate it when he pleases. Once detonated, the Rhotuka opens into a portal that can take him and others to any place of his choosing; he can also fire it at an object or individual, causing them to instantly teleport. 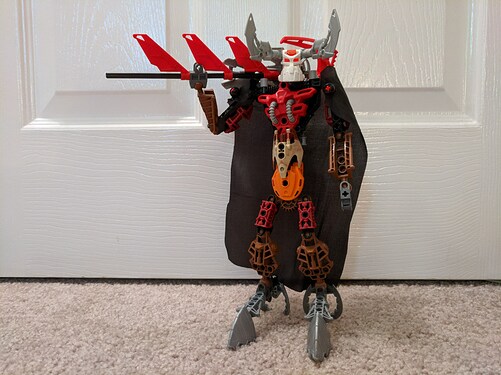 Unlike most Dark Hunters, Toros has a sense of honor and prefers to fight fairly. However, he will strike an enemy from behind it his mission requires it. Toros has a hatred for Matoran for what they did to him in the Archives, but he has a respect for all forms of wildlife. He refuses to embark on missions that involve killing Rahi, and so the Shadowed One has recently tasked him with pursuing and assassinating the Toa Rode. 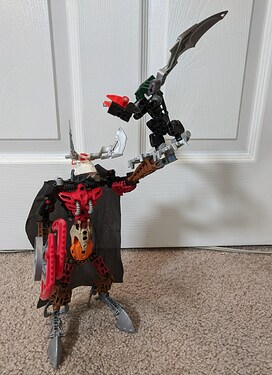 I know Toros’ color scheme is a bit muddled - I worked with what I had available. I tried to work in the red/orange/tan theme of the 2001 Ta-Matoran, but I didn’t spread it out enough. I’m proud to say that his cape is of my own making. He’s no masterpiece, but I hope you enjoy him just the same.

Doesn’t look that bad, good job.
For the color scheme I would recommend taking out the orange piece.
Also, his weapon looks awesome.

Tis a neat build, the feet are quite a neat design. I would suggest removing the orange and tan pieces, though. It’s a cool Dark Hunter overall.

i like this!
the colours may seem a wee bit
off, but he looks like a force to be reckoned with!
also, what set are the red matoro blades from?

I agree with what everyone else. Looks pretty cool, but there are some colors that stick out.

also, what set are the red matoro blades from?

I keep looking at the feet. They look really interesting, combining them with the horns and skull head scream CapraDemon from Dark Souls.
The only thing that I’m a little unsure about is the colourscheme of the torso, the random spatter of tan and orange breaks the colour scheme in my opinion.