Disclaimer: This moc is of a sexualized female. If anyone is offended, please do not post any negative comments about it being sexualized. Also, do not flag this topic. I have permission from legomaster1378 to post it. On another note, I am beginning to have a limited amount of parts so I did my best to improve the color and texture schemes. Ok, onto the MOC itself. 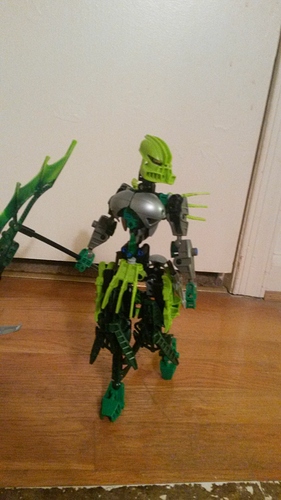 From anyone who hasn’t viewed my previous topic (or has seen it but got extremely offended by her sexualized features), this is Nehe Princess of Jungle. In the story I created, she was meant to be the next heir to the throne of her people. Unfortunately, her people were slaughtered off by a malevolent force. Now, she is among the last of her kind. According to her culture, the women are to be considered very beautiful but also fierce warriors. Unfortunately, Nehe and her people were not fierce enough to stand against the malevolence.

Now for the build: 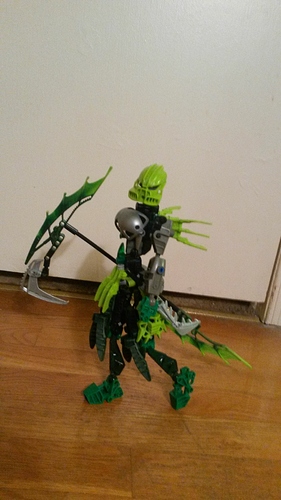 So I made a couple changes to the MOC from last time. The first thing I did (besides the better background) was change the color scheme to something much more concise than last time. My last version of Nehe had a color scheme that was all over the place, consisting of green, red, gold, grey, and orange among other colors. After reading the reviews from the previous topic, I decided to change the color scheme to just shades of green, grey and black, also getting rid of the red pins. Due to me having a limited amount of parts while overhauling, there are still blue pins, but blue is a much less contrasting color to the main color scheme than red is. I also got rid of the CCBS in favor of Rahkshi arms, which turned out to work better for the overall building style (really a shame that they don’t come in green). 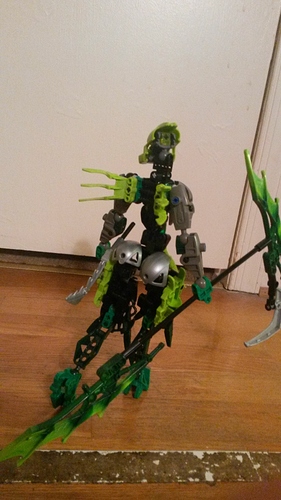 Like her previous incarnation, I decided to keep her sexual features due to the relevance to the story with the women being very beautiful and everything. For people who haven’t seen the old post, this was actually quite a challenge to do as the Nuva armor would restrict the range of motion she had as she moved her leg back. Then I had the idea to actually put the hand on a ball joint and then place the Nuva armor on top of the hand. Now, the buttocks can fully articulate along with the rest of the rest of the legs. 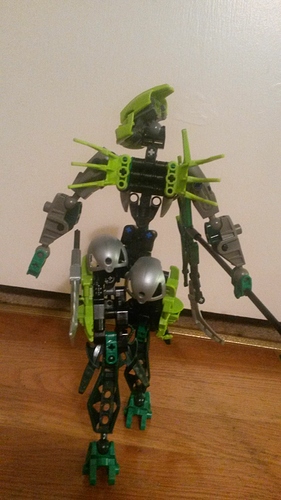 As for her weapons, gone is the golden harpoon on the end of her scythe and instead there is another Gresh blade. Also, her claw is gone for a toothed knife which is mounted to her side. With Nehe being from a rainforest tribe that is relatively “primitive”, this would make sense.

For reference, here is the previous topic about her:
https://board.ttvpodcast.com/t/nehe-princess-of-jungle-with-a-bonus/22570

Now I would like to make a statement. Sexualizing female characters should not be a bad thing as long as it is what you are trying to convey. If you have the intent to make a female character, you should first decide on whether to make the MOC sexualized or unsexualized. Also, the MOC can be sexualized as long as the rest of the proportions are correct and not just tacked on. I know that there are a lot of people that do not agree with this at all, believing that female MOCs should not have these characteristics. However, I believe that you should convey these characteristics as long as it has relevance to the MOC’s overall story, character, culture, and circumstances. Different cultures have different customs on how to portray sexuality and I think different fictional cultures in the Bionicle Fan Fiction should not be any different. Also, women have a lot of body types and not just one. The woman could have an hourglass shape and a round buttocks or a pear shape or a round shape, a slender build, etc. So there shouldn’t be any right or wrong way to build a female MOC. I think a few months down the road when I get more parts, I am going to build a female that is much more “conservative” in her overall build, which means she will have cultural beliefs that go against pronounced sexuality. As for the argument that this is toy line for 8 year olds, this is Lego. Lego can be enjoyed by all ages.

Any recommendations, comments, or praise is welcome as long as it’s not an attack on me or the points I made. Thanks and enjoy!!

I better not make the nuva butt song again, people might judge me

also I dislike the lower legs, the shins are too skinny and the feet are weird

@Asriel Thanks man, i really do appreciate it. Are there any ways I can fix those parts?

I don’ t really know how you could do it, Im not a good mocker, but I think some creature like feet would look good on her, as for the shins… maybe search for some lower leg designs

I think this MOC would benefit from removing the Nuva armor on the rear, and not because anything about oversexualiIng. It simply looks odd and disproportionate with the rest of the smooth transitions of the MOC.

@JoeScibelli Would there be any way to thicken up the waste without getting rid of the rear?

Adding armor plating, but I think you should remove the rear. I don’t dislike it because it is sexualized, I dislike the rear because it simply doesn’t look good.

Honestly aside from the colors i don’t see any improvement.

At least there are no comments about the “fully articulated realistic squat booty”… that’s all I ask.

On a more serious note, you did do a fine job of getting the colors straight and de-cluttering the moc.
Liked

The arms, or atleast the Rahkshi thighs there don’t work with the MOC. Trust me I had that problem

This is much better than the original, I must say… Although, the arms could use some green on them. As of now, they’re almost all grey. Maybe thicken up the shins, too.

Alright, here is an update. First, I gave her a silver belly plate to widen up her waist. Next, I took out the friction extender; even though it gave her a bit more stability, it made her look very skinny in the process and even without it, she can still hold herself upright. I also decided to ditch the scythe, giving her a twin leaf blade sword using Gresh’s blades. The scythe just proved too cumbersome to yield especially in thick brush plus it made her unbalanced. Also, her weapon resembled Gali 2015’s a little too much in my eyes as she also carries a staff like weapon. I am keeping the rear as I feel that it adds character to her (also it was to prove a point of sexualization). I think she turned out pretty good this time.What do you any of you think? Thanks. 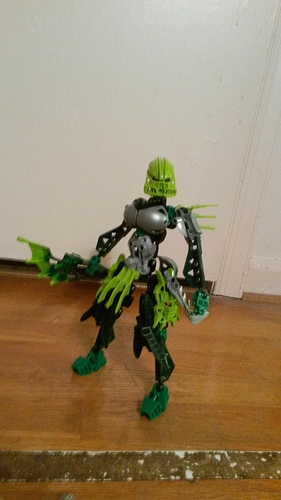 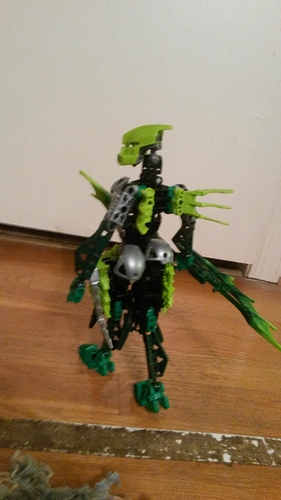 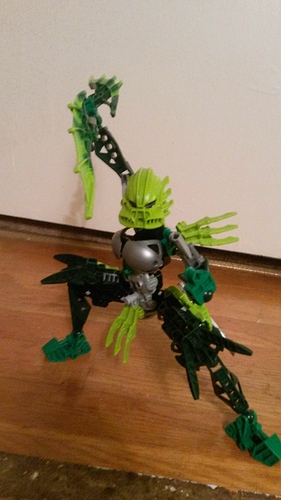 I think I am real satisfied with how she turned out. Don’t mind the carpet by the way.

Better than the previous at least. Glad you added in some more silver.

If making her as a a copy of “bad sexualized MOCs” was your intent you’ve got it all covered… however, if your intent was “a good MOC that also happens to be sexualized”, I’ve got one suggestion. Since you’re using the Nuva shoulders to create the “key features” of your MOC, you ought to have the rest of the build use smoother textures to match it. My beef with the use of “Nuvaboobs” in most situations has less to do with the fact that they are, well, Nuvaboobs, but that they’re slapped on to the build in disregard of the fact that most other armor and bone pieces on the build are super textured in comparison to the flat Nuva shoulder.

Yes! My eyes no longer melt from the overload. This is better, much better. She’s too skinny though

An, yes. I appreciate the extra armor on the torso. And the green arms. However, the green Mistika claw in the crotch rates looks weird, especially when she’s crouching. And, is is the extra bulk around her upper legs supposed to represent a skirt? If it is, I would try to make the “skirt” so that it was separate from the legs. I know that sounds difficult but trust me, it is possible.

The nuva shoulders on the rear still look absurd to me. Not even just in concept, either.

Sexualized or not, human legs do NOT stick that far back. Not to mention, the silver really sticks out…

Here’s the things, I am not a person who hates the concept of sexualized MOCs, but most MOCs of that category are extremely difficult to get to “look right” and end up looking terrible. This isn’t terrible, but the sheer attempts to make it look like this make it, in some places, look downright unnatural and somewhat alien.

Getting rid of the shoulder armor on the rear I think would actually make this look pretty good overall. Silver distribution could use a little work, but it isn’t terrible.

As I have said, removing the shoulder armor on the rear isn’t a change made because I “hate the concept,” but because the MOC would actually benefit from it visually. 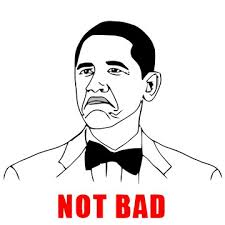 Ok guys. Honestly I really appreciate the suggestions and all, but I think I just want to move on to a different MOC. This experience has really been a fun experiment though but it’s having some strain on me, and in the end, I am very happy with the how the MOC looks as of now.

@Hawkflight Good point on the textures. I think maybe next time I make these type of MOCs I will incorporate smoother textures and patterns.

@Leoxandar Thanks I’m glad you appreciate it. Honestly she looks thicker now in the waist.

@SmeatyFlavor I’m really glad that I thickened it out as well. Maybe I could probably ditch the skirt altogether or something like that.

@JoeScibelli I’m sorry that it seems like I’m brushing you off but the rear I feel is one of her key physical traits that make her stand apart from other females. Afterall, she was supposed to be the most beautiful in her tribe. I understand where you are coming from though, trying to emulate a toned female body to a T with large bulky parts is actually quite hard to do and the result may not look right to some people. I think it looks ok (she looks thick at least) and I’m really happy with it. I think she will look really good next to this future female MOC that I am going to build that doesn’t have any of these features just as a contrast and to balance everything out. As a note, she was based of female fitness models, some of which come very close to looking like this MOC. I really do appreciate the suggestions though.

the rear I feel is one of her key physical traits that make her stand apart from other females.

There are other ways to make it look like how you want it to without using nuva armor.

You don’t need to get rid of the rear entirely, but I think changing some pieces around would actually make it look more like how you want it to.