Order of Mata Nui Files #4: Helryx, Leader of the Order 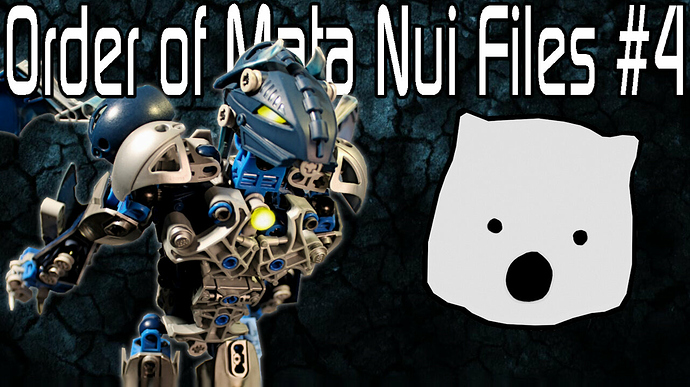 Backstory:
Helryx was created by the Great Beings in Artakha, coming into being immediately as a Toa. After her creation, she participated in the construction of Metru Nui, and watched the Toa Mata being created. She was also a member of the Hand of Artakha, and later founded the Order of Mata Nui when the former was disbanded.

During her time in the Hand of Artakha, she witnessed the dimensional relocation of Luna Magna. An event where a massive rift opened in space, pulling objects of extreme power through into the Bionicle Universe. During this event, she was struck by a blast from the Spear of Separation, an alternate timeline’s version of the Spear of Fusion. (Carried by that timeline’s Vezon.) This caused the miniscule amount of evil and bad intentions to be separated from her, and given physical form. This physical form would later grow into the deadly being known as Flandrex.

During the founding of the Order of Mata Nui, Helryx would have established the rule that Toa, Turaga, and Matoran were not to join the organization, but due to Flandrex escaping imprisonment, the Order of Mata Nui was nearly wiped out only a few months after it began. Due to this, Helryx began a new recruitment program with Tobduk’s assistance, stating that any beings discovered with unusual or rare abilities, Toa or otherwise, are to be recruited. The only condition: they pledge their lives to doing the Great Spirit’s will. Often times, this agreement would require bartering of the Order’s services and/or resources. Eventually, this program helped build the Order back up to its original power.

Helryx currently serves as the unwavering leader of the Order of Mata Nui and all of its factions. Occasionally, Helryx goes on missions herself, often time getting into complex, dimension-jumping adventures that take place across the universe and back. In her spare time on Daxia, she records and updates information on every being the Order comes into contact with, using her Mask of Psychometry to piece together the missing information. She keeps these Order of Mata Nui Files with all of her other writings in the Order’s massive library.

Thanks for checking it out! Stay tuned for more!

There she is, the first Toa, the leader of the Order of Mata Nui, and she looks beautiful.

A nice depiction of the OoMN leader herself. The mutated Rau isn’t the first thing that comes to my mind for the Mask of Psychometry, but it’s not terrible by any means. I do find that the Knight-esq appearance all the silver armor gives off really fits Helryx’s character though.

This a great interpretation of Helyryx. If this is what she may look like in the cannon, I would believe it. Well done.

I really like this. The armoring, the colors, the build choices, etc.

I dislike the wings however. Helryx doesn’t have wings.

Dude shes one of my favourites

What if I told you she just had a Red Bull?

While I actually like the moc, it looks more like a Makuta than a toa, the wings, the claws, the rather evil looking head, it just doesn’t look right.

Well, it’s a g1 toa, it doesn’t really have to, though honestly if he shortened the arms a bit and slapped some skull spiders on the hips it would be fine.

This, this looks fantastic! I love the shaping and colours.
The back of the feet look a little weird though.[quote=“Recynon, post:10, topic:31087, full:true”]
This does not look remotely female.
[/quote]

It does to me

If you think this is bad, check out her sister: https://www.youtube.com/watch?v=rP4GUWyikGI

Very nice and well designed MOC! I’m a big fan of the color scheme too.
The only thing I find a bit unnecessary is the Kiina helmet on the back of the head, but that’s a very minor detail.

This MOC is like Marvel movies, you know there gonna be great.

I have accepted this as what Helryx looks like.

Nice. Using Kiina’s helmet as a ponytail is pretty creative, gotta say. However, I think the body and limbs look a little bit too stocky, even for Helryx.

Also, are you ever going to post Konpaku? He was my favorite moc of yours

Reminds me of one of those little shoulder devil things, but blue.

Nice job. Strange that it looks almost exactly how I imagined her.

Also, are you ever going to post Konpaku? He was my favorite moc of yours

Yep! He’ll be after Flandrex. You can actually go ahead and see the next two MOCs I’ll be posting on MOCPages.