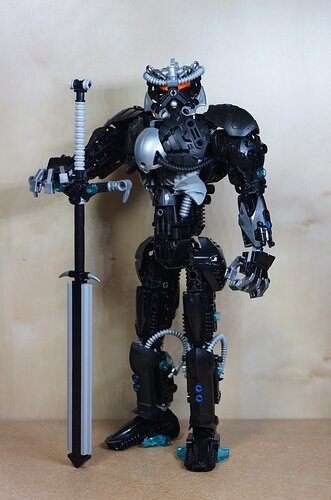 Created by Mata Nui from a pool of Antidermis somewhere on the Souther Islands, Ornek formed the Brotherhood of Makuta along with his fellow Makuta. He started out with creating Rahi like everyone, but never found this task quite to his liking. Whenever his duties allowed it, he thus practiced his combat abilities and also studied tactics later on, soon advancing to be one of the most respected military commanders within the Brotherhood, even though his duties hardly ever involved more than fighting against small pirate gangs or the occasional Rahi.

His first real campaign was the one against the Barraki led by Teridax. Being well aware of Ornek’s abilities, Teridax entrusted him with taking care of most of the logistics. During the battle itself Ornek commanded the army’s main contingent of Toa and led them to a crushing victory against Kalmah’s forces.
In the aftermath of the battle, when the Barraki had been taken away by Botar and Teridax angrily left for Destral, Ornek again was left in command to reorganize the troops and “clean up”. He was subsequently elevated to Supreme Commander of the Northern Forces and Field Marshal of the Brotherhood, which made Ornek fourth in command in the military hierarchy after Miserix, Teridax, and Antroz. It was in this position that he fought Repirax’s “Cleansers” on the shore of the Southern Continent and led the relief force to Destral to defeat the apostate Makuta.
Ornek‘s main task in his new command was to deploy forces where needed and to take care that the army was ready at every moment to defend the rule of the Great Spirit. Since he was considered so good at military things and since most Makuta weren’t interested in leading army’s themselves, they usually didn’t bother to ask for troops only, though, but just bade Ornek come personally to take care of whatever needed attention.

Over the years the “Fist of Destral”, as Ornek got called eventually, wanted greater conquests, however. When Teridax declared his Plan at the Convocation, Ornek thus joined him without much hesitation. Later he employed a Toa Hagah team to aid him in his battles and after Gorast had conquered the Visorak, organized them into a horde and integrated them into the Brotherhood‘s armies.

When Spiriah demanded some Visorak to watch the Skakdi on Zakaz in his absence and later, when Kojol requested troops so he could sack Artakha and steal the mask of Light, Ornek followed their requests. However, in both cases nearly all the troops were killed or destroyed, which didn’t sit well with Ornek, since he considered all the losses to have been avoidable (which they were). Especially Kojol’s endeavor cost Ornek a great deal of his standby forces and thus forced him to increasingly rely on Dark Hunter mercenaries until he could replace them, even though he kept complaining that while the Dark Hunters were definitely skilled, they’d sooner run than fight to their deaths.
This exactly turned out to be the case when Ornek was assigned to deal with some pirates on the west coast of the Northern Continent. The pirates from their fortified position prevented the boats of the Dark Hunters to join Ornek’s forces since the Dark Hunters weren’t willing to take the losses. In the end this nearly led to the complete annihilation of Ornek’s troops and Ornek’s death, if not for the sacrifice of Weye, the leader of Ornek’s Toa Hagah.

Shortly after Teridax’s Toa Hagah had stolen the Avohkii, Ornek got a message from Destral which ordered him to kill his to prevent further betrayal. While he valued his Toa Hagah, who had fought at his side in countless battles, Ornek wasn’t one to ignore direct orders from his superior. He had just read the message when Callik, one of his Toa Hagah, entered, claiming to have already killed the others since they were planning betrayal (though actually they had killed themselves to buy Callik trust – they had already heard about Teridax’s Toa Hagah and why they turned against the Brotherhood). The Toa’s plan didn’t work out and Ornek killed Callik after a short fight. Then he began preparations for attacking Zakaz, as the Brotherhood still saw great potential as soldiers in the Skakdi and the island also was of tactical worth if the Brotherhood wanted to attack Metru Nui.

But without Toa Hagah to protect his back and strongly reduced resources in Rahkshi and Exo-Toa, not to mention the ferocity of the Skakdi, Ornek felt the tides of battle not in his favor, for once. When his army’s main body was practically overrun by the enemy’s Tahtorak cavalry, Ornek went to interfere and buy time while one of his lieutenants - Sidorak - already took care of the withdrawal – beginning with his personal command, the Visorak, which earned him quite some loyalty from the spider Rahi, since they were the only part of the army that in the end left Zakaz alive.
Ornek, still in the midst of battle, managed to kill a few Tahtorak and their riders, but in the end was overrun by the sheer number of enemies – some Skakdi rammed a Devastator through his armor, pulling the trigger, and the famous Fist of Destral vanished in an explosion.

Ornek wore a Protosteel armor like every Makuta. His Kanohi Akueldu, Mask of Thrown Vision, allowed him to look at his surroundings freely, from all angles. While it didn’t allow him to see through obstacles, it still gave him an immense advantage as a commander as he could easily survey every battlefield and spot traps and weak spots in the enemy ranks.
In battle, he usually carried a massive protosteel sword that needed to be swung with two hands, cleaving effortlessly through most opponents and their weapons. 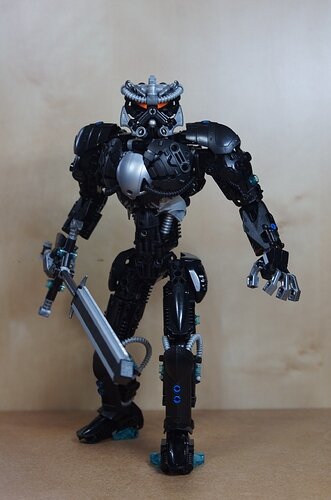 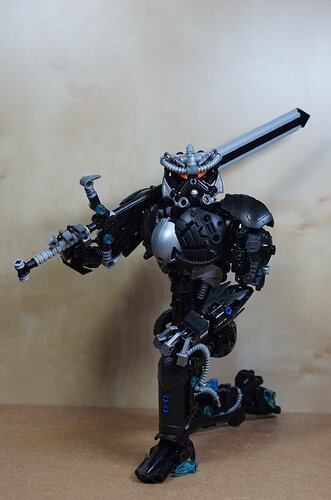 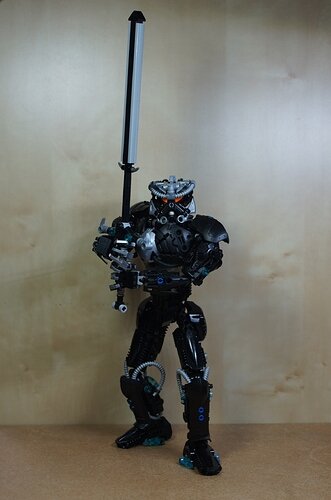 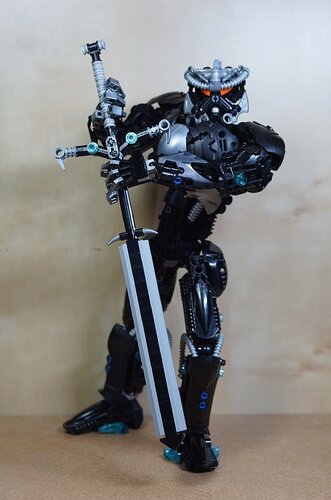 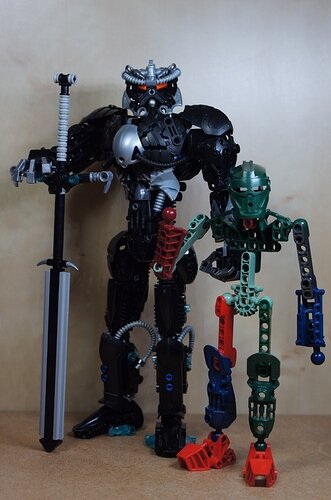 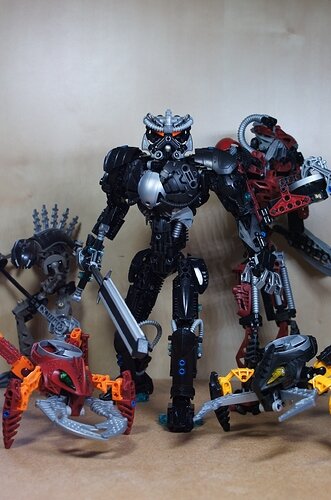 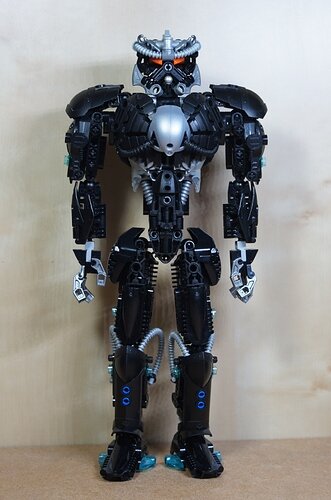 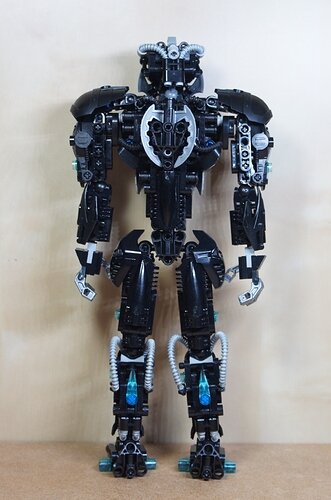 Head detail (picture is from the previous version, but I didn’t change the head): 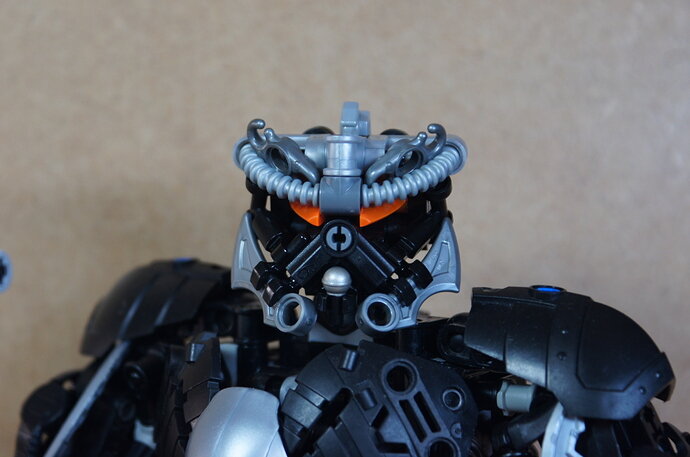 Well, Ornek’s back. Wasn’t quite as happy with the proportions of V2 anymore, so I completely redid torso and arms. Payed off, I’d say. Either it was a year in a box, or shortening the torso by one unit had that much of an effect, but I can actually pose him a bit more now. Maybe he could use just a bit more silver, but everything I tried looked too slapped on. Still works with more black, though, I’d say. 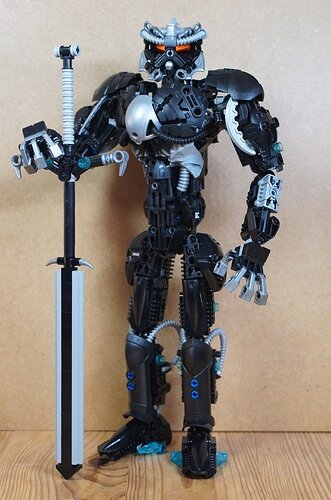 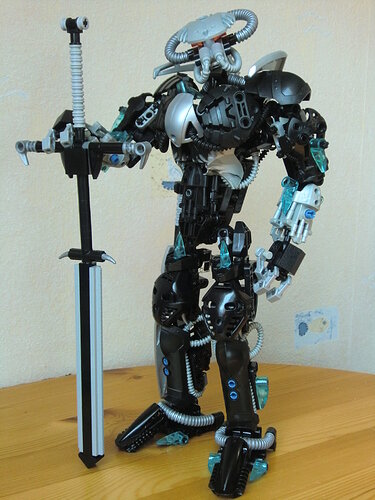 Looks very solid! The mask is truly amazing, and I also see some nice usages. One thing I find weird is the really small amount of Trans-light blue, which isn’t really a problem though. Great MOC!

That mask is fantastic. Well done!

I can’t even deal with that custom head. How did you even think of that? Unreal.

And the sword is just phenomenal.

custom head. How did you even think of that?

Trial and error. Hours of it.

This is positively awesome! Your Makuta mocs always impress me, but this one in particular is great. I love the custom head, the articulation and proportions, and the clever bits of parts usage (especially with the head and sword).

Honestly, he looks like a member of Sidorak’s race, or maybe a Sith lord. It’s sick as hell, I just question using this particular head design for this specific occasion, because now if you want to make a Steltian MOC, you gotta concoct another head design that achieves the same aesthetic. 'Course, it could just be that he has similar tubes. I dunno, just throwing out my initial impression.

You’re not the first one mentioning that to me, but I still don’t really see it

. That head reminds me personally not at all of Sidorak.

The mask looks like a mix between movie Sidorak and movie Terry. Interesting. Though “thrown vision” confuses me as a name choice.

Very solid MOC overall, just that in particular confused me