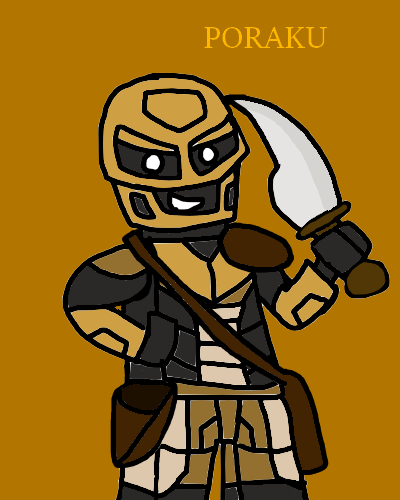 Personality: Joking, Non-Serious, though has a soft caramel center.

Background: Growing up on the streets of Motari, Poraku never had much. So he stole the stuff he didn’t have, and soon became a sort of Robin Hood in Motari. He honed his skills of thieving and athletics to peak, and he soon came to the attention of the Dark Hunters. He was then hired as an errand boy through all of the the different territories. He also was hired by the three Merchant Kings to spy on each other.

Btw, wouldn’t being a Dark Hunter servant and triple agent be secondary occupations?

Btw, wouldn’t being a Dark Hunter servant and triple agent be secondary occupations?

Nope, there’ll all his main occupation. He is a stinking amazing multitasker.

oh we can actually make individual topics for our g3 mocs?

Yeah, I realized yesterday that having all MOCs in one topic would be too overcrowded. Now, that topic is for brainstorming, and I’ll put links to MOCs in the initial post.

@JediTimeLord824: Fair enough, but for my self-MOC as an example, I have “healer” as my primary occupation because it’s my self-MOC’s official occupation, despite him spending more time as a militia scout/guard and a Rahi enthusiast. In your case, being a Dark Hunter (or DH servant) is an official occupation (since you get paid legitimately), while pickpocketing isn’t an official job. Triple agents get paid, but it’s also off the books.