Hello TTV Community! It has been a very long time since I’ve posted another Zydus moc revamp. Now if I remember correctly I said I wouldn’t post another Zydus revamp moc unless I find another way to improve this moc for the better.
And as the matter of fact I did but don’t fear this is…well I hope it is the last version I’ll ever do on Zydus.
Unless I get a bunch of parts to make a giant titan moc or try something else with him, I can safely and happily say that this moc is finished! This is how I imagined him to be and yeah, I hope you will enjoy and let me know what you like and didn’t like and if there is any way I could improve then let me know! So without further ado, enjoy! 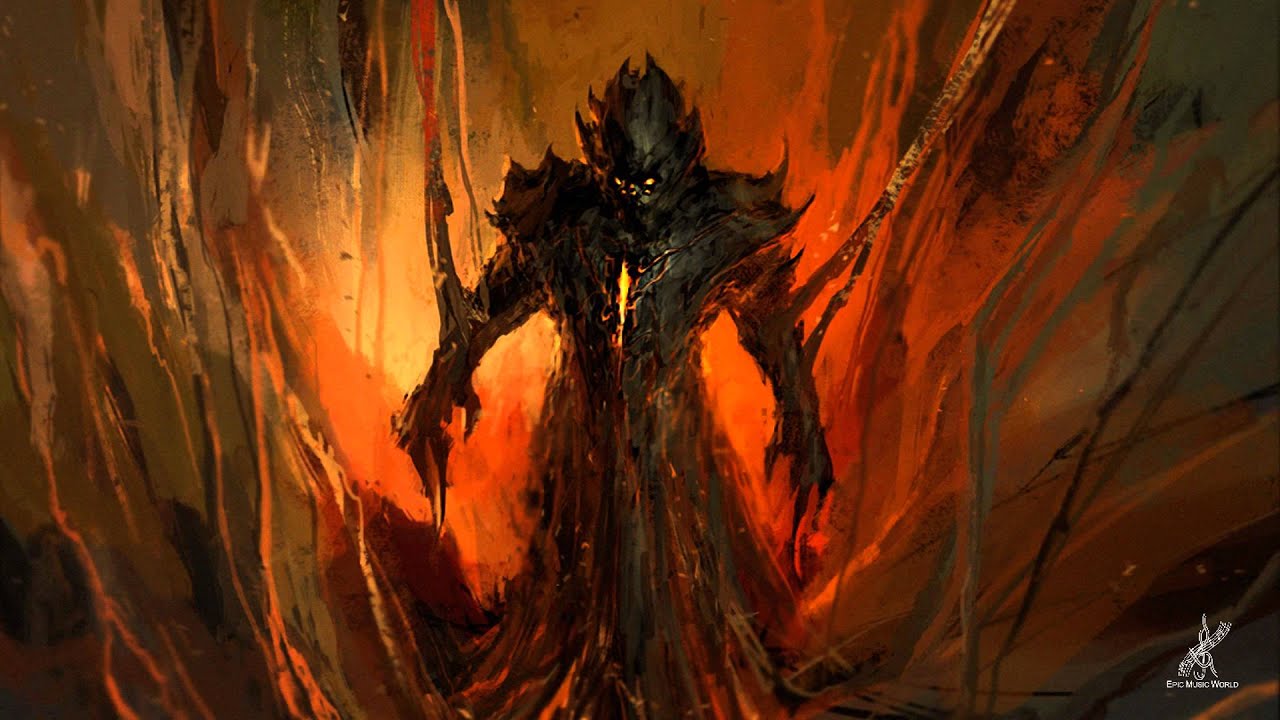 Zydus was once a benevolent being, for he truly cared and protected his brethren as well the Mortals and their worlds which they inhabited, at first he grew very fond of them and protected them from any kind of danger, on his watch they were truly safe.
Till sadly one day due to unfortunate events that the emptiness and darkness passed through the barrier and corrupting humanity which in the end lead Zydus visiting the Void in the search for answers.
But Zydus never truly came back, his once innocent soul now distorted and twisted into a Mad Man or Mad Vestal causing him to see the corrupted humanity as a virus threatening the existence of life itself and he sought out to annihilate it.
However, his tyranny didn’t last long as the remaining Vestals calling themselves now the Twelve fought and defeated Zydus but not without sacrifices, as out of pity they decided to imprison him in a dimension made for him.
He swore that one day he will return and finish what he has started, since the fall of a benevolent being the Twelve have never been really the same.
Zydus transformed his prison now into his Dark Kingdom and at his disposal, a group of Demi-Godly beings called the Kaethrani which sworn their allegiances to him and they remain forever loyal.
Eventually, there was another battle at that time Zydus grew stronger than ever before, only Oros was capable enough to hold up with him even though he knew that it was just a matter of time, thanks to the Vestal of Wisdom called Cavmos told them that a truce had to be made and one it was made, however, with one exception, that one day when they are ready they will fight again and the winner takes all.
They agreed and now there hasn’t been another war between the Vestals ever since for their powers could bring about the end of the Multiverse, so now Zydus plays along, waiting for the perfect opportunity to strike because he knows that slow and steady wins the race…[/details]

Here you can see, I went back a few versions ago and gave him his cape back. This is what he wears when not in combat. 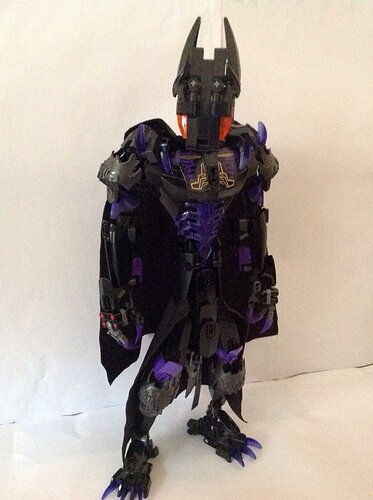 The back view with his cape on. 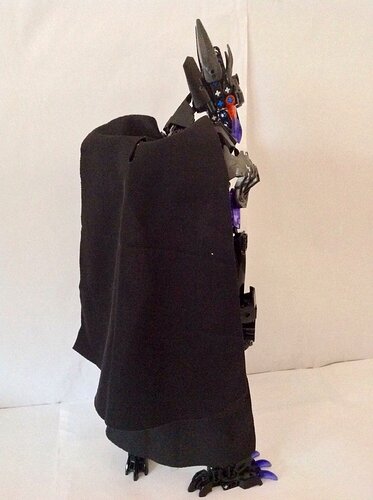 And with his cape removed and all this is how he looks when in combat, and from what you can see quite a lot has changed so I’ll mention them all. 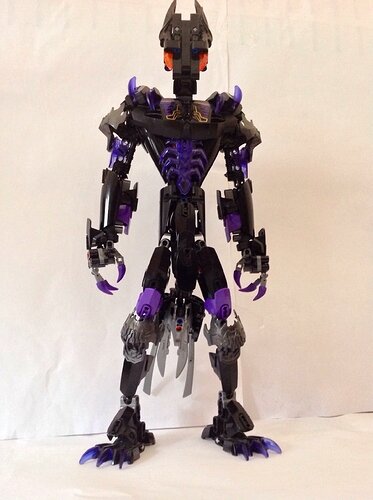 As you can see I decided to bulk his hands a bit and I think they turned out great. 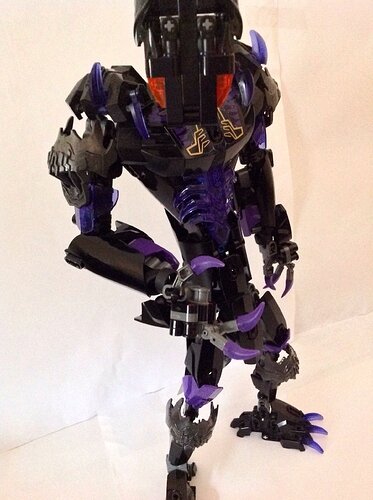 His head also changed quite a bit, it’s bulkier and believe it or not he has a mouth a working mouth! 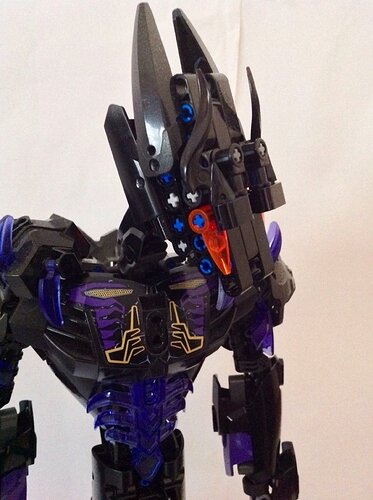 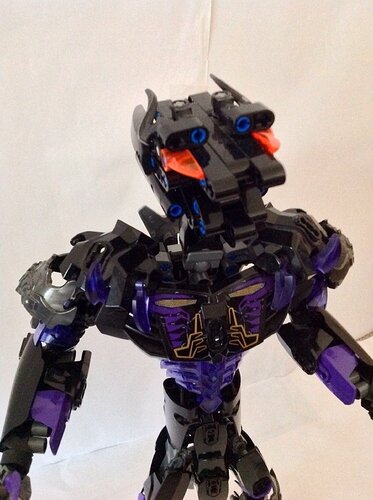 His roars are said to create earthquakes and shatter islands… 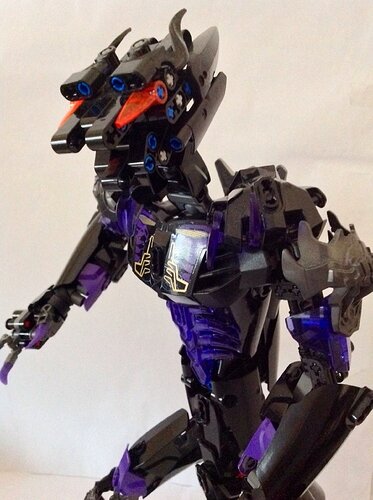 Here is his back view without the cape, much more compact than before so I have no real complaints. 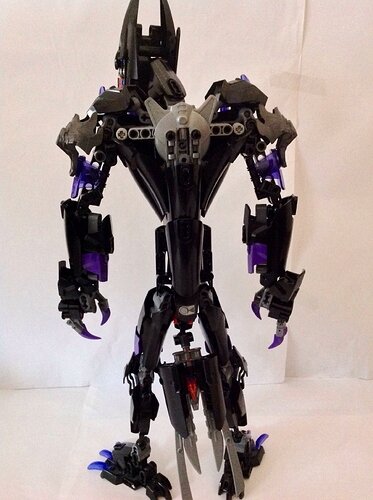 His torso also changed quite a bit, it took me two days to think about how I can re-do it and one day to actually do it. 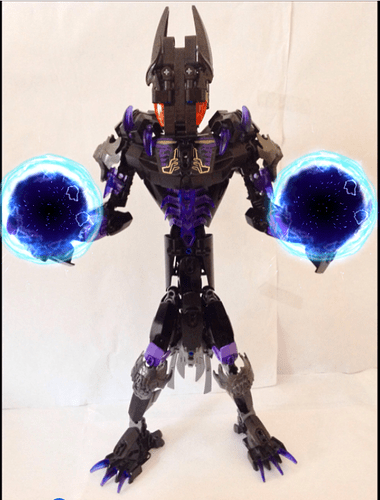 So I think you might have noticed a little addition to him…well you are not wrong, he has a retractable tail and it has no real limit how long it can be, the only limit is what he sets it to be if he wants the tail can go for 10 miles or 100 of miles or just a few meters, but make no mistake it is a deadly weapon able to destroy weapons by impaling the planet as it digs towards its core and destroys it. 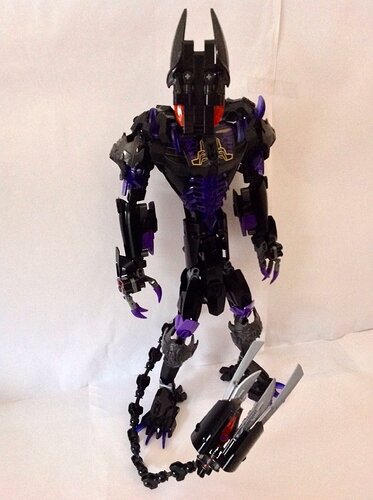 You see that red borok eye? And the other two red borok eyes on Zydus’ head? Can you see the connection? So basically he can also see with his tail…so when he is fighting somebody he can actually fight that one and fight another with his tail. 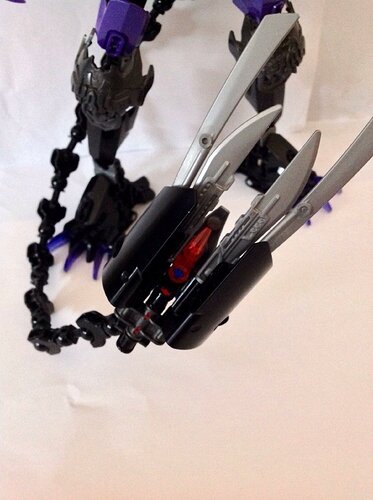 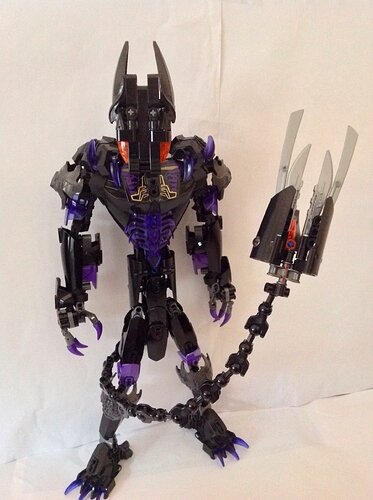 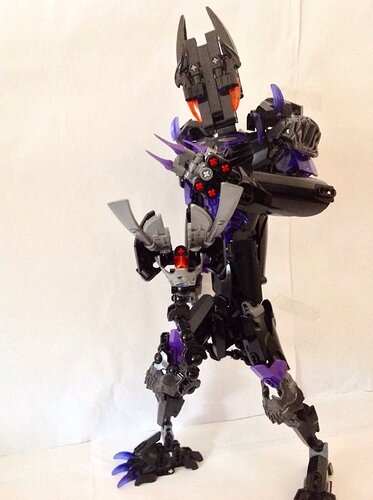 Here you can see more of his torso and how I re-did it. 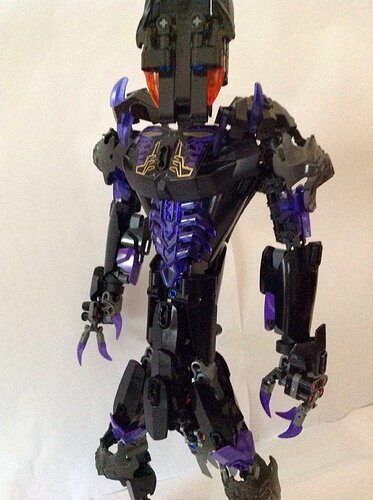 And yes he is posable and sturdy, he won’t fall that easily unless you really try to. 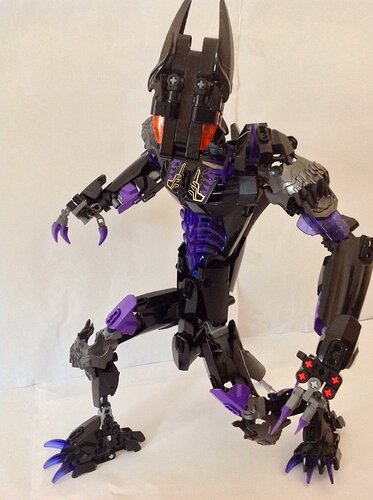 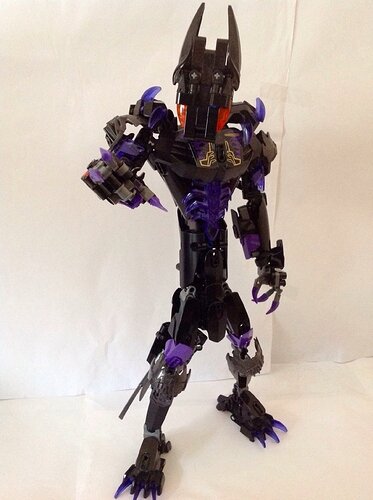 Here is a size comparison so that you kinda get the idea how big he actually is. 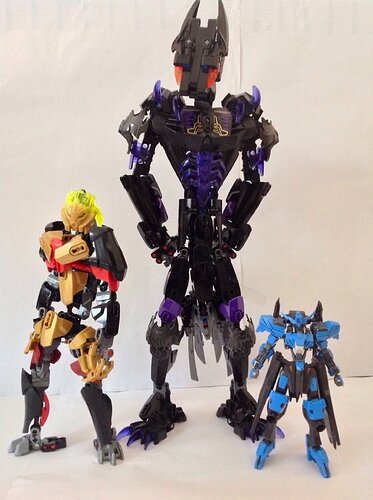 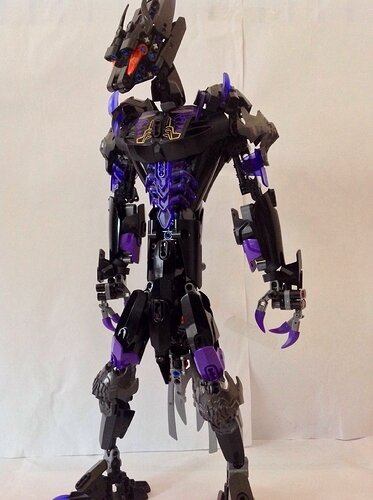 Now I’ve gone a little further than I expected and I did a video for all of the versions I did for Zydus if you would be so kind as to watch it that would be greatly appreciated and would mean personally a lot to me.
I hope you enjoy the music and I hope that this journey’s end has been satisfying for you.

So without further ado, enjoy! Because this has been a helluva ride! 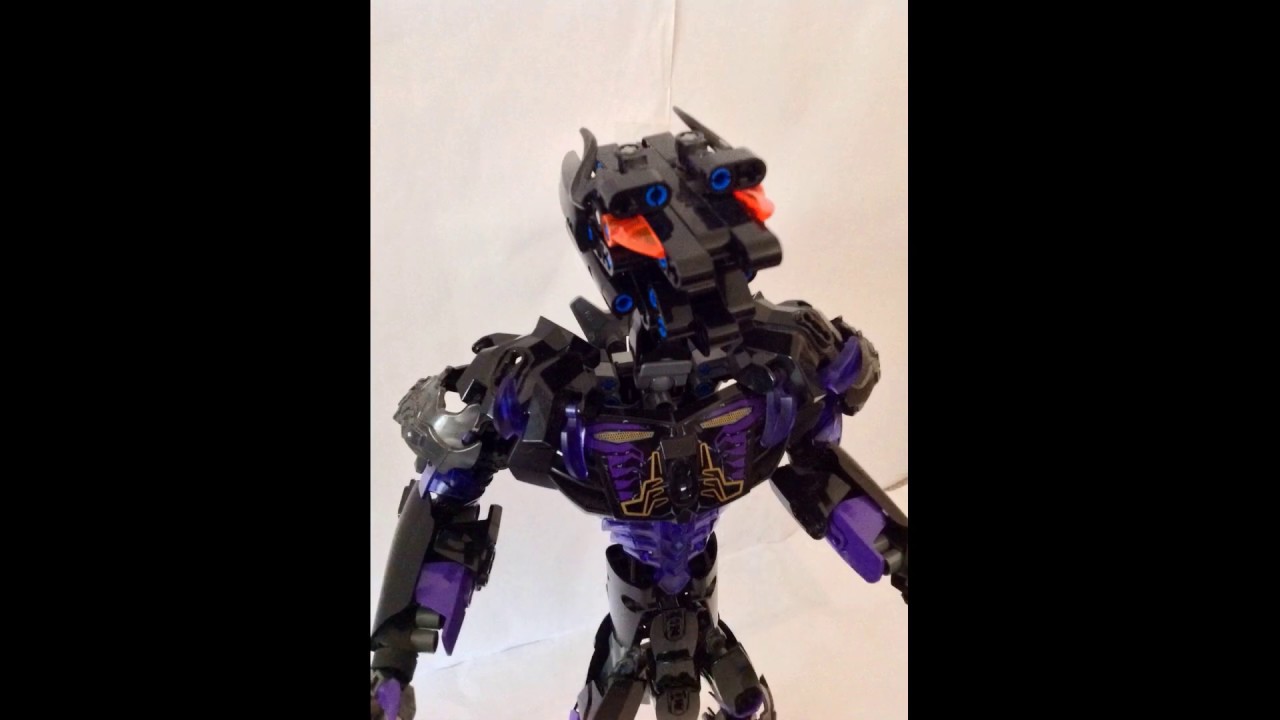 Final Thoughts:
So my thoughts about the moc: Could I have had done better? If I had large plethora of pieces hell to the yeah but as of right now he is the best up to date version of Zydus there will be unless I get many lego pieces which I kinda doubt it there wouldn’t be a Zydus v.6 and I think I am sure about that unless again things will change till then this is the final result and I am really happy with him.

He is very posable, stable he looks good in person, but in pictures he kinda looks a bit weird to me but god if I could go to those lego things where you could show your creation well I would go there but where I live at the moment is not possible or I myself am not up to date with that kind of stuff.

So, I hope you have enjoyed this moc and its helluva ride and journey he is the only moc I never took apart only one time I did it and I regret it and it was a hellish pain to get his torso and head back together because believe me…he looks like a deceptive moc he doesn’t look like he has much going on but go under his hood and you’ll see what I mean.
Constructive Criticism and Feedback is appreciated, please tell me what you did like and didn’t like and I am looking forward to conversating with you all in case there are some questions about him, so peace!

Amazing work!
The otorso could have been a bit shorter, or perhaps the legs a bit longer, but other than that, this is easily your best piece of work yet!
Well done!

Thank you, did you also watch the video?

Not yet.
I will later, though.

I like the colour scheme & overall aesthetic, though like @meepinater said the torso does look a bit long compared to the legs.

This is the first time I’ve seen Darkseid so it was nice seeing the progression in that video; he’s certainly come a long way!

The legs are too thin other than that I love it!!

I love this version, the colour scheme works far better than the original, the lack of orange fits and the infinity gauntlet never really worked so I’d say a big improvement (I subscribed by the way)

Now I want to build him

You do? What did you like about him? @SonicBionicleMaster

Looks menacing! Nice work! Also, do you have a topic for that gold and red guy, cause he looks cool.

Shadya Amunet an Egyptian Female gifted by the Gods with the power of time travel by just simply opening portals with her hands and travel through time and space. Her weapons were crafted by the Ancient Egyptian Gods themselves and gifted to her as a reward for completing the Task of the Gods. Through her time traveling days she learn modern english and modern stuff and she is very familiar with advanced technology her intellect has doubbled since she left Ancient Egypt and now is traveling through time just for the fun of it. Her Whip can change its size only by the command of its user and if the user wishes so the Whip can also burn with hellfire. Her spear can channel mass amounts of lightning and thunder and can create thunderstorms, and lightning tornados. Her scythe can collect s…

This is fantastic! I love the torso build.

Thank you! It means a lot, you also watch that video right?

Not yet, but I will.

Well thanks for checking it out at least!

I love the shaping.

I’d suggest building the head out of system, or a system/technique combo, currently it’s just really blocky and the blue pins despite the memes are actually pretty bad. the torso I feel is pretty good but sorta suffers when trying to continue past the bottom of the ribcage piece and becomes a bit too skinny and straight. the legs and arms are sorta skinny but don’t detract much.

Great Job! The head is pretty blocky, but I think it couldn’t be done better,I like it! Also the color scheme is really well done.

@Omega_Tahu well thank you but because of that you didn’t like it?