After going on a nostalgic trip back to 2009 and revisiting Punch-Out for the Wii, one of my favorite games, I suddenly wondered if I could draw parallels to the boxing matches in the game and Bionicle’s Glatorian matches.

So in this hodgepodge of a mashup, I replaced all the fighters from Punch-Out with Glatorian/Agori which I felt fit for the roles based on similar archetypes. Detailed rationale for each decision provided below. 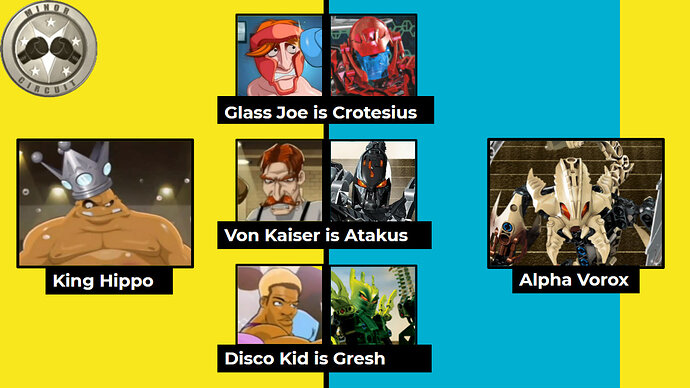 Glass Joe/Crotesius: Honestly the worst comparison in my opinion, since there aren’t any Glatorian or Agori who fit Glass Joe’s infamously pathetic reputation as a fighter (I was considering Berix, but he never stepped foot in the arena). I ended up with Crotesius due to vaguely similar personality traits - Crotesius’ boldness and ambition to represent Vulcanus slightly mirrors Joe’s pride for his country (Vive la France!) and boldness in the ring despite losing 99 times. Plus, Crotesius’ thin build and hunched stance is similar to Joe’s.

Kaiser/Atakus: Similar to Kaiser’s experience as a boxing instructor, Atakus acted as a coach/assistant to less experienced Skrall in the arena. He also boasts similar arrogance. Didn’t choose a full-on Glatorian (like Ackar), since I wanted an accurately gradual progression in challenge.

Disco Kid/Gresh: Both are rookies to the arena, and boast similar charisma. I could also totally see Gresh performing Disco Kid’s flashy moves for how nimble and athletic he is.

Hippo/Vorox: The only logical choice since both are the only animalistic fighters in their respective universes. The “Alpha” refers to the actual Alpha Vorox that Malum challenged during his exile. 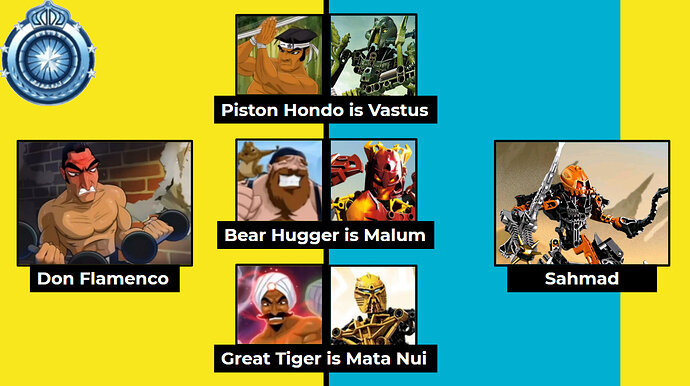 Hondo/Vastus: Both possess a strong sense of duty and honor, and are known to meditate between fights to enhance their performance and senses.

Bear Hugger/Malum: Both are large, brawny, and stocky fighters. They both have an affinity with the wild side - Bear Hugger with his bear trainer and squirrel, Malum with the Vorox.

Great Tiger/Mata Nui: Probably gonna be a controversial one, since Mata Nui never was an active Glatorian, but i’m treating this line-up kinda like the Glatorian Arena game (where you in fact played as Mata Nui). They both possess “magical” abilities, though i’m aware that spiritual projection is probably not one of them XD

Flamenco/Sahmad: I know Sahmad isn’t a Glatorian, but hear me out. They both have lovers (Don has Carmen, and Sahmad has Annona), and Don’s bullfighting can be paralleled to Sahmad taming the Spikit that pulls his chariot. Sahmad has stated that he would fight a Glatorian before anyway, so why not put him here. 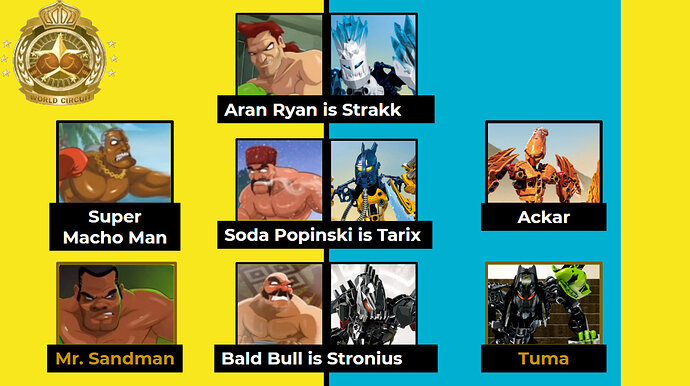 Aran/Strakk: Both fight dirty and take cheap shots during matches. Must I say more?

Soda/Tarix: It’s only fitting that the water tribe fighter takes Soda Popinski’s place, who is associated with his respective liquid. Headcanon that in this universe, Tarix uses the tube to take sips of soda from a canister on his back

Bald Bull/Stronius: Both are brawny, short, and strong like bulls.

Macho Man/Ackar: Ackar is probably the only Glatorian who could defeat Stronius, so I put him here based on that fact alone. Ackar also seems to have a similarly large fanbase though (everyone was cheering for him during his fight with Strakk)

I’m fairly confident that this line-up strikes a fair balance between character similarities and skill-progression. Feel free to suggest replacements if you think someone else would be a better fit for the role!

3 posts were merged into an existing topic: BIONICLE Game Ideas!