“Her name’s Racee. Used to be a member of another tribe on Spherus Magna. Can’t remember what it was called, something to do with dirt or something.”

“I never heard of any other tribes on Spherus Magna.”

“Yeah, that tribe doesn’t get mentioned a lot these days. They got wiped out long ago, back before even the Iron Tribe. Supposedly, she’s the only surviving Glatorian.”

“Huh. What happened to them?”

“Well, no one really knows. Rumor has it that Racee had a hand in it, though.”

“Yeah, probably just a rumor. Don’t ask her about it though. She gets… grumpy when you bring up her old tribe.”

I figured it was time I had an image besides Pohatu, and I got Finn and Rey today, so… 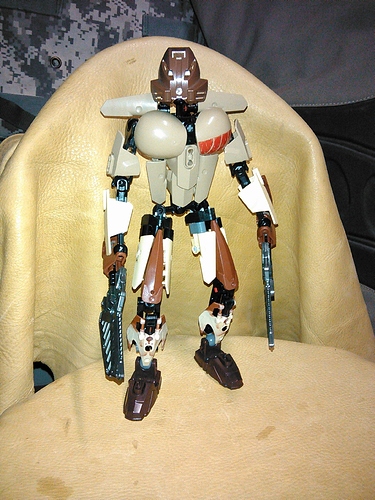 (Darn red stripe on that shoulder piece from Finn…) 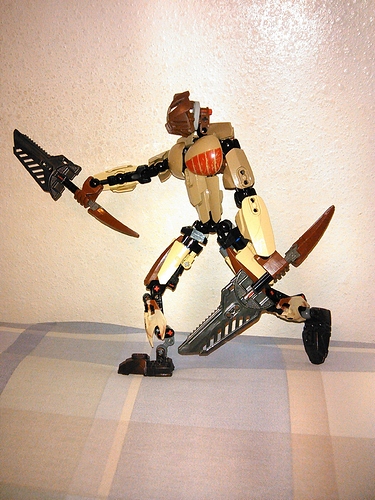 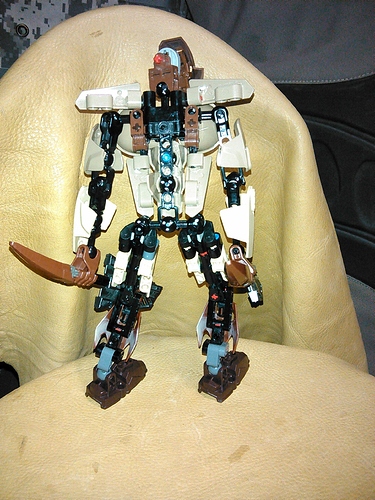 Anyway, that’s it! Depending on what brown constraction pieces come out in the future, I’ll probably update this eventually, but that’s it for now.

As always, feel free to share any comments, critiques, complaints, criticisms, or cobras.

As always, feel free to share any comments, critiques, complaints, criticisms, or cobras.

The torso feels really flat and one sided, the SWC add ons look kinda awkward, the lower legs look very strange from the side and it looks really bad from the back.
Other than that it’s not to bad, I do quite like the upper legs.

Man thats one hell of a back.

The leg is decent, but the overall body is pretty bad.

As others have said, the body definitely needs so work, but otherwise it’s okay for a first attempt

As others have said. It’s a good first attempt (better than the first few iterations of my self-MOC.), but definitely in need of improvement. The torso is too flat in a lot of places, the “core” of the torso (the CCBS shells) are rather skinny, and the breasts are quite out of proportion to the rest of her. You might get better results the second go round by using a single, wider stomach plate, and Size 3 CCBS shells as breast armor.

The shins actually look pretty good, I can’t think of how you might improve on that design aside from adding back armor. The thighs don’t work in my book, though. Too many conflicting angles. The arms are alright, but switching the upper and lower arm armor so that the shoulder is properly covered could help you. Also, pet peeve of mine, those HF shield blades aren’t really that sharp, so they look kind of stupid as swords.

I’m glad to see you begin work on your own selfMOC. Hope this critique helps you in future!

You know, I was looking at this yesterday, and I realized that the torso is kinda… flat. I’m surprised no one on here mentioned that.

Well[ now that you mention it…

The thighs don’t work in my book, though. Too many conflicting angles.

I can see your point. I was going for a “brown spike in the tan armor” look. I moved the tan pieces up 9/10’s of a notch, so hopefully it’s clearer.

The shins actually look pretty good, I can’t think of how you might improve on that design aside from adding back armor.

Well… it’s difficult to do that without constricting the poseability. As it is, the legs can bend almost a full 180 degrees. But I may have a solution… 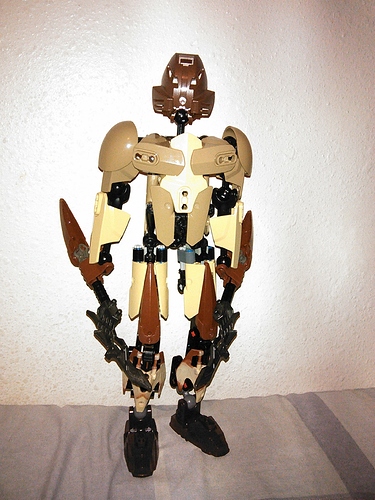 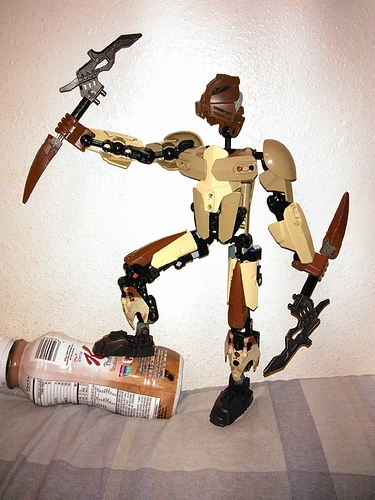 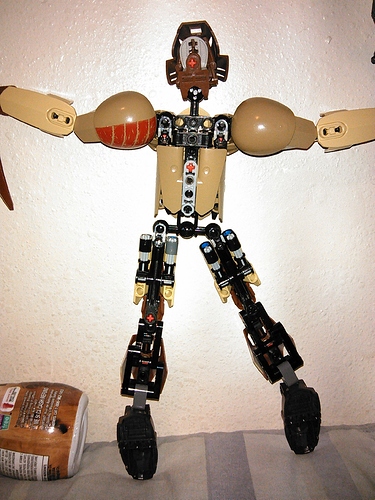 The neck is very thin

Well, that was a vast improvement.

Still got a ways to go, but I gotta say for a very quick update, it’s a rather impressive upgrade.

Legs probably need the most work. Primarily the thighs, and how they’re connected.

Otherwise, a good update. Looking forward to seeing how this evolves further.

How to get rid of that pesky red stripe:
Buy some Brasso, put on plastic or rubber gloves, lay down some cardboard or go outside, pour the Brasso on a rag, and rub for about 10 minutes. The printing will be removed after about that much time.