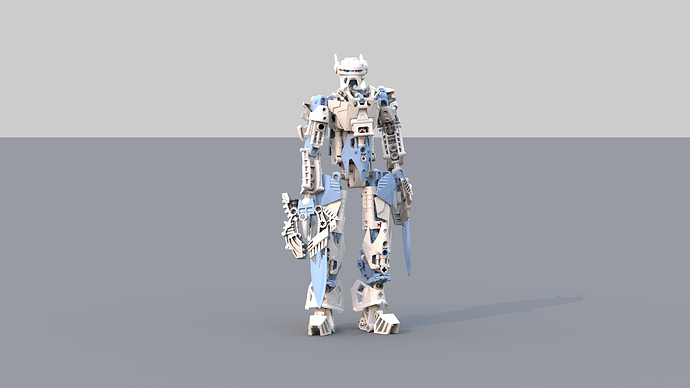 ##GENERAL INFORMATION:
This is my current version (version 2.4) of my SelfMOC. It was built to be a somewhat accurate recreation of how I look with clothing on while also balancing flexibility and “cool” factor in looks. The only things that doesn’t match up too well with the real me is how bulky the chest armor is and how wide the hip armor is in relation to my actually hips. I picked Ice as my elemental power because I felt that it matched my personality the most.
For my weapons, I have designed three different sets of weaponry for my SelfMOC, the primary one having been ripped from one of my Toa Manu, Kova (link to his topic here).
The model itself with the main weapons uses the colors White and Light Royal Blue for the primary color scheme with some Metallized Silver highlights, Metallized Silver, Silver Metallic, Titanium Metallic, and Light Royal Blue for the weapons, and Translucent Fluorecent Blue for the eye color. The model would stand about 260 mm tall if it were a real model and consists of 294 pieces.

EQUIPMENT (MAIN SET):
–2 Multipurpose Ice-based Weapons: Can form a pale blue Ice Blade for close range combat purposes, or can be used to fire directed blasts and/or streams of elemental ice powers from the center of the weapon.

PERSONALITY AND TRAITS: Normally cool, calm, and logical; Feels somewhat disconnected from his own emotions and doesn’t fully understand them; Prefers to find logical and efficient solutions to problems; Prefers being alone or with a group of close friends; Not as cold to others as Kopaka is once Jegatu gets to know someone, as he is willing to offer help if asked to by someone he knows; Has issues asking for help when he needs it; Takes things literally unless further analysis determines that something shouldn’t be taken literally, but that does not mean that he can be easily fooled; Has issues picking up accurately on body language cues from others unless he really knows them well; Can learn new skills faster than most others can; Becomes very detail-oriented when focused on a task that he doesn’t dislike doing; Prefers sleeping as little as possible.

KANOHI: Horkamahi, the Great Mask of Phase Shifting, lit. “To halfway move to a place/space” (From “hor” meaning “half, partly, almost,” “ka-ma” meaning “to move,” and “hi” meaning “thing, object, place”) (Pronounced hor-ka-maw-he)
Allows user to effectively walk/climb/fall though walls, ceilings, and floors via phase shifting of the user’s body. Depending on how the user phase shifts, the user can become undetectable to everything except users of Kanohi Elda, the mask of detection. However, the user of the Elda will only see a visible yet unidentifiable distortion of the user of the Great Horkamahi. Only the user themselves can phase ■■■■■. However, a user who has mastered the Horkamahi can climb walls with it by phasing sections of nearby wall along with themselves. Concentraction level required is moderately high until mastered. 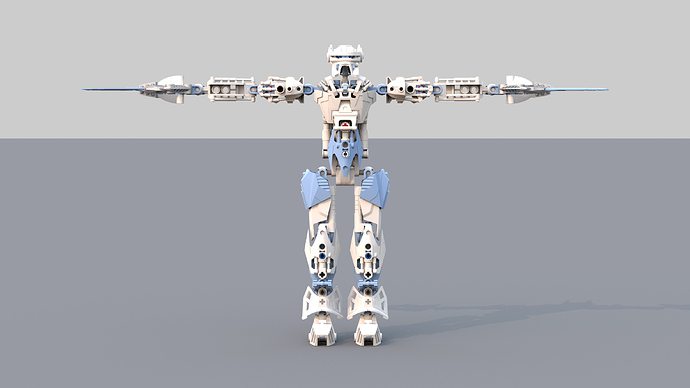 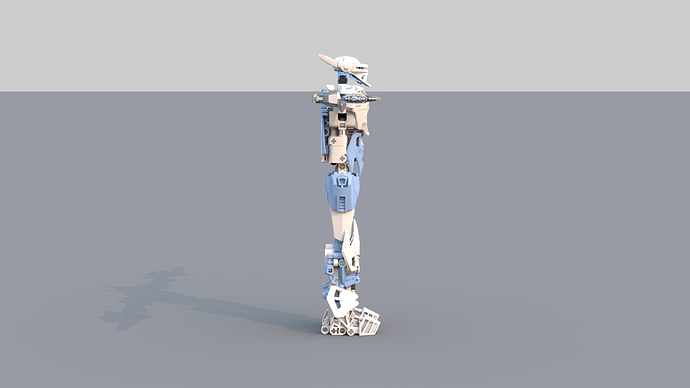 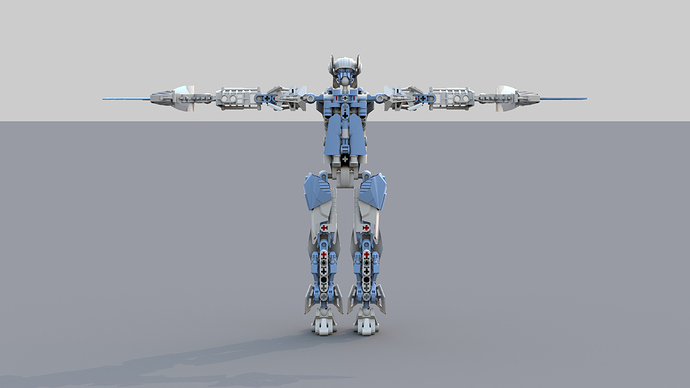 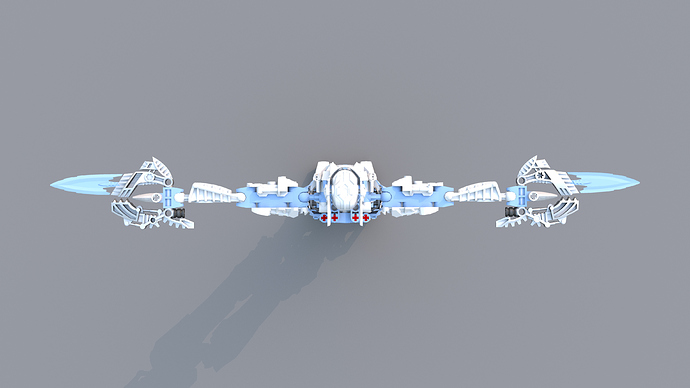 Front view of Toa of Light version, just for grins and giggles: 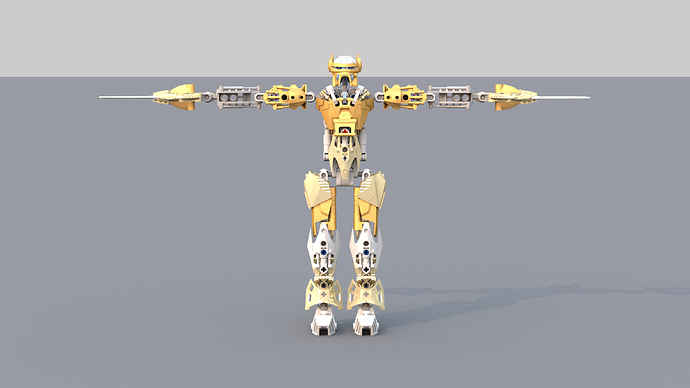 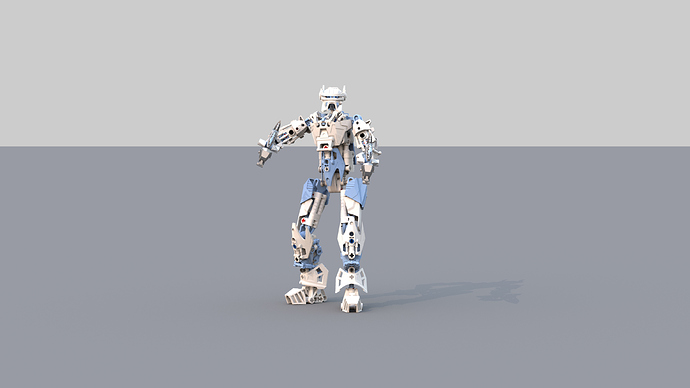 Walking through snow and ice: 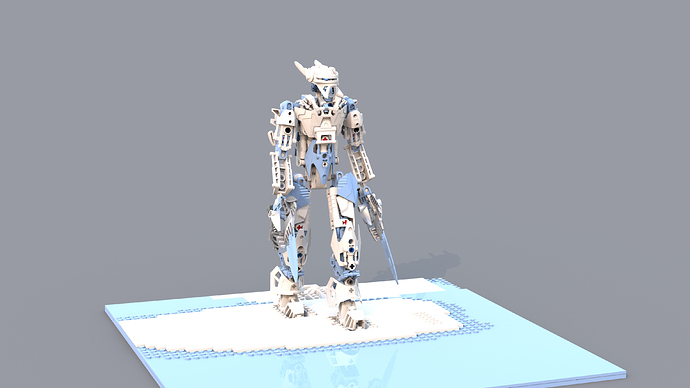 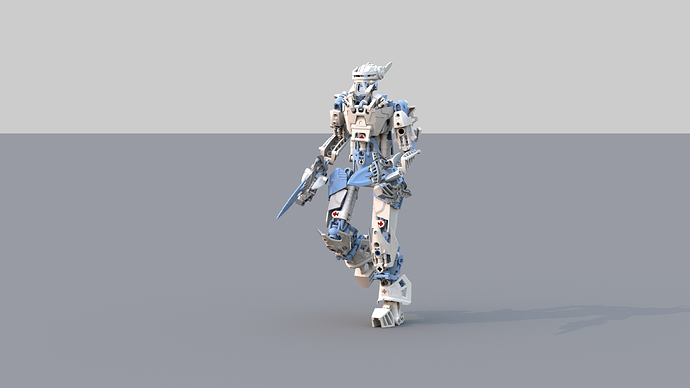 Leaping to the side and firing weapons: 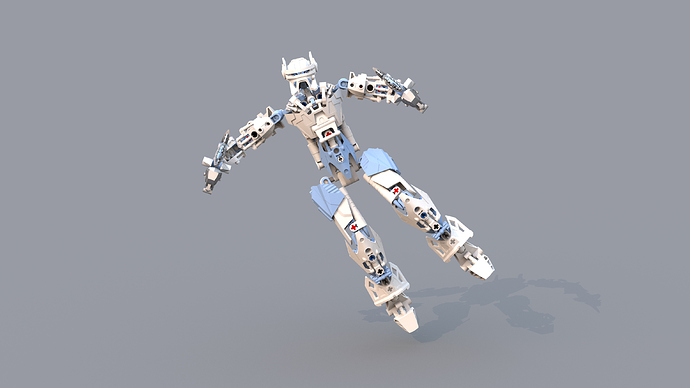 Leaning against an ice wall: 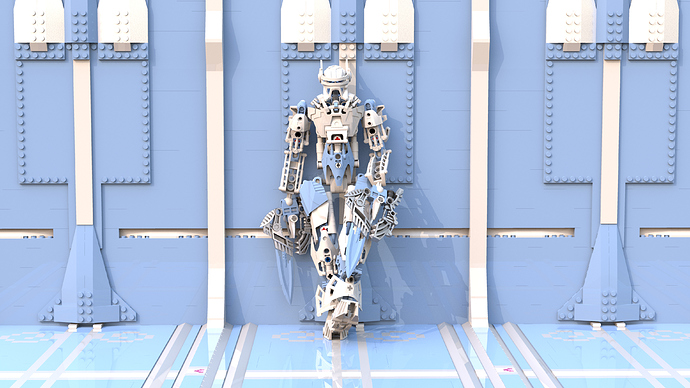 Wide shot of the previous render: 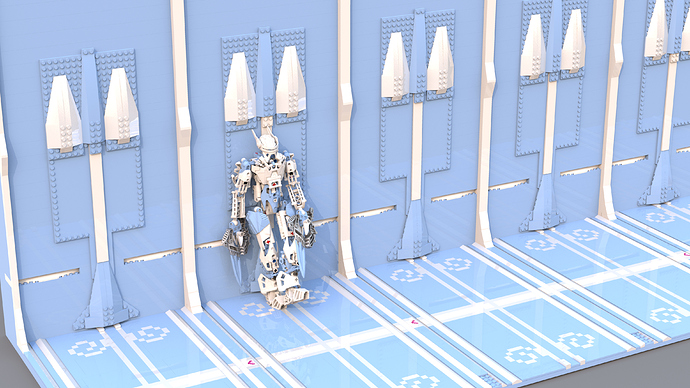 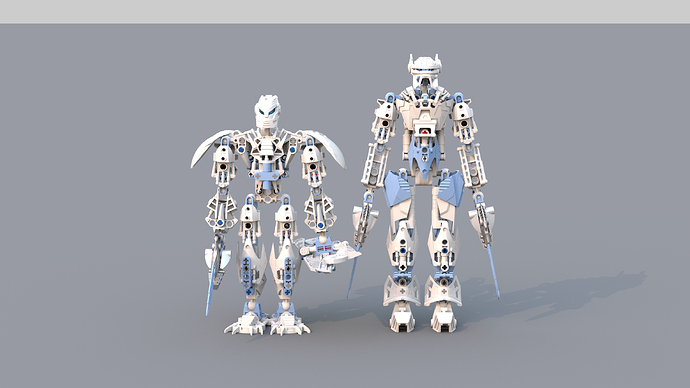 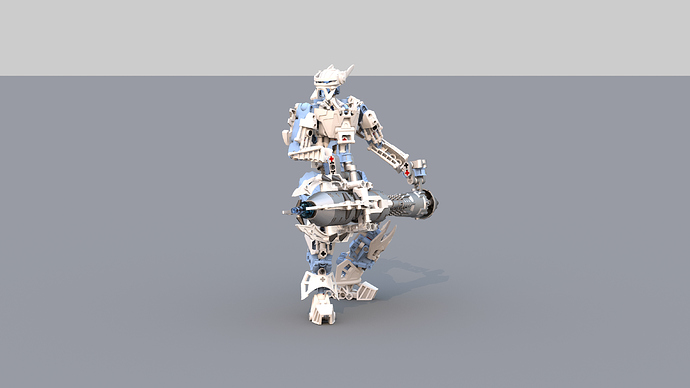 NOTE: Those of you who play Overwatch might notice that this weapon is similar to Zarya’s weapon. When I made this about 1.25 years ago, I had anever heard of or seen anything for Overwatch and was actually trying to create a weapon loosely based on a large gatling gun I had previously designed that was inspired by the TF2 Heavy’s gun. 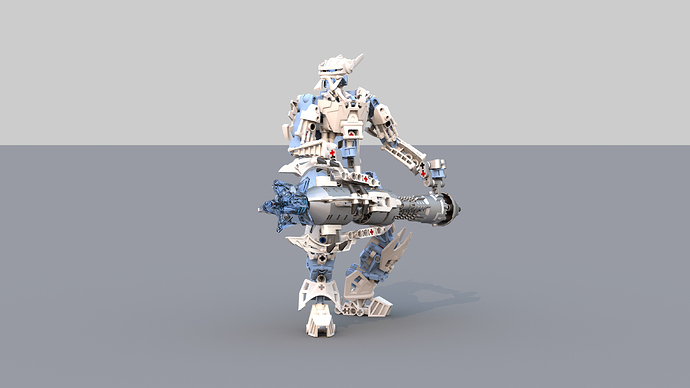 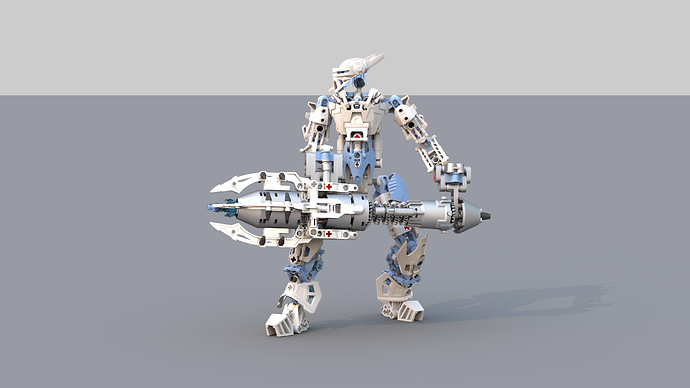 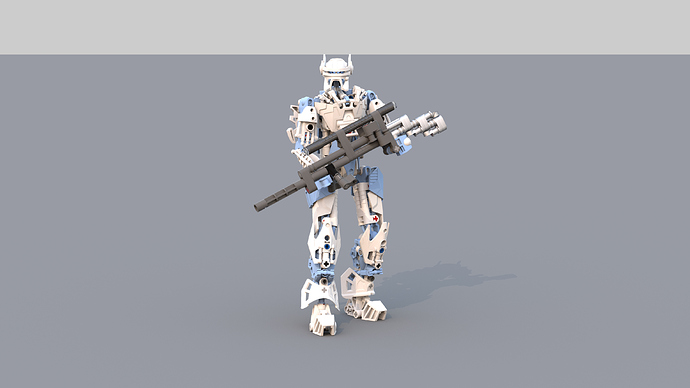 SelfMOC 2.4_Sniper Rifle.jpg3840×2160 624 KB
EQUIPMENT FEATURED: Elemental Sniper Rifle: Channels and focuses the elemental power of the user into a high power projectile that is accurate over many kilometers. Projectile can be deadly if the user wants it to be.

##ALTERNATE FORM:
Because this is being released on Halloween, I thought I’d make a Shadow version of my SelfMOC as well. All I did was change the main weapon set, the coloration, and the pieces of armor on the front of Jegatu’s arms. The only new colors are Black as a primary color and Translucent Red as his eye color. The part count has gone up to 308 pieces and the model’s height is unchanged. 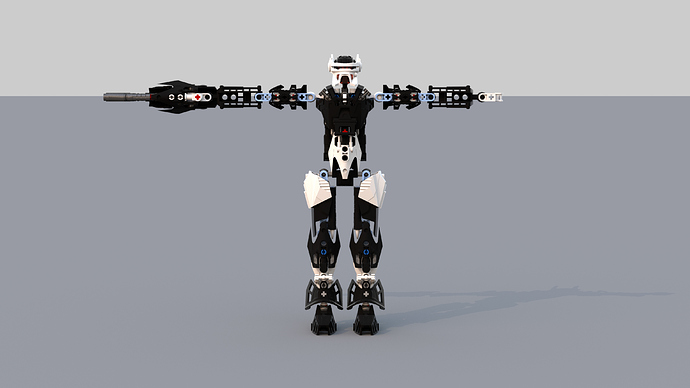 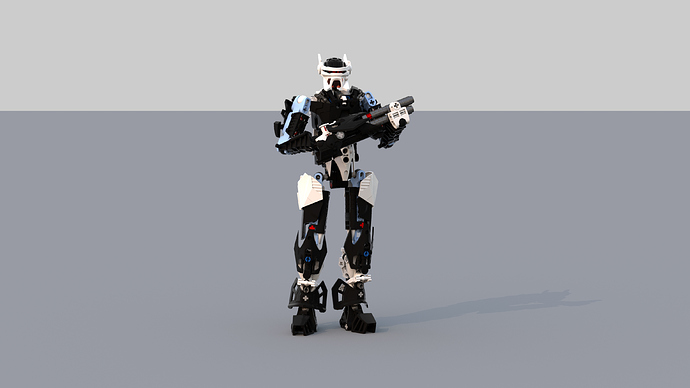 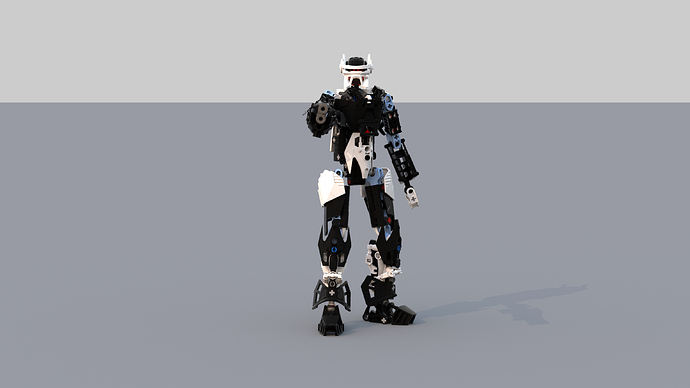 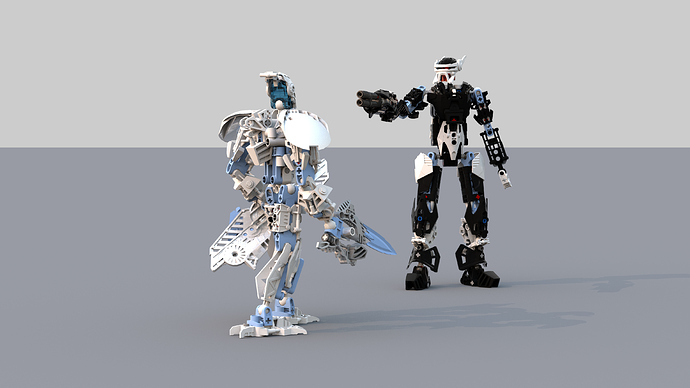 Rendering engine used is BlueRender. You can find it here.
Character name, Toa team name, and Kanohi name are derived from the Matoran to English dictionary that can be found here.
Any and all constructive criticism/feedback is welcome.

this is really cool! awesome!

The armour seems to cluttered to me, but other than that it’s good.

May I ask what about the armor makes it seem cluttered to you?

Looks a lot better The last one