Okay this actually looks really nice. Robotnic is again a massive highlight. But after the redesign I actually really like Sonic’s character here. I’m really looking forward to this.

This looks so much better! I think this could be a genuinely fun movie.

Am I the only one who doesn’t find it all that better?

I mean, it definetely looks much more Sonic-like, which is an absolute, creditable win, but it looks… Out of reality. It doesn’t blend with the rest of the world, it’s big eyes and blue hair make him pop. He isn’t looking real while the other one kinda looked slightly more natural… Tho still ugly.
Also not to mention that at points the CGI looks just incomplete.

I can kind of see what you mean. I don’t think it works as well as say Detective Pikachu, but I still think it’s a massive improvement

Also Robotnic continues to be amazing.

“Of course I want a latte. I LOVE THE WAY YOU MAKE THEM!”

I can tell he’s gonna be great in this. Moreso than I thought with the first trailer.

Moreso than I thought with the first trailer.

I just wish his mustache was bigger.

Robotnic is so far my favorite character. I’m glad they changed Sonic’s model, though I’m happy his personality is very true to what we’ve seen.

But yeah Robotnic is the highlight of the trailer and is easily the best part.

I mean, that’s the point. He’s not from this world.

I HAVE RETURNED FROM THE VOID.

After being adrift in space for so long since the Paramount Event, I’ve finally managed to float my way back to the Hype Train. And I gotta say…

Now I know what you’re not saying: “Pakari, you’ve been the guy who’s constantly been on this thread making edits to make Movie Sonic look like Sonic, what do you think of the redesign?”

They gave him bigger eyes.

They gave him a semi-side-mouth.

They fixed his proportions.

They gave him GLOVES.

They gave him SOCKS, DANG IT!

Real talk, I know this movie isn’t going to be great. I can’t even really say that it’s going to be good. But darn it, call me dumb or childish or tasteless, say whatever you want, but the trailer made me laugh, and the one thing I wanted to see this move for - Sonic the Hedgehog - actually looks like Sonic the Hedgehog. And to top it all off, all the redesign changes were the exact ones I was hoping for, and are the exact same ones I would have made. And I, as a staunch Sonic fan, cannot miss this movie and the chance to tell Paramount and Hollywood as a whole with my money that their attention to what the fans want was not in vain.

I agree
is it surprising that from this trailer I kinda prefer this over any MCU movie?

Jim Carrey as Dr. Robotnic is honestly such a good choice. Sure he hardly looks like Eggman, but personality wise they’re kinda similar, though Eggman is kinda more off the deep end. Perhaps, Dr. Robotnic will start to act more like Eggman as we know as the movie goes on? It would make some sense as this is kinda like an origin story for Sonic and Eggman’s feud. Heck, they could make this into a Sonic-verse and if they did it right it would be great. 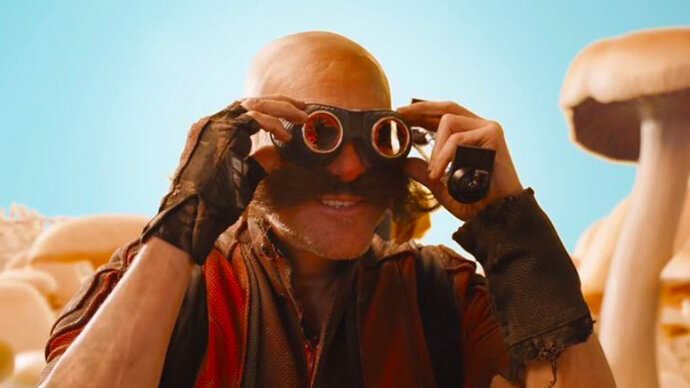 Looks like he follows Sonic to his original world

so my origin story theory holds some ground

so my origin story theory holds some ground

I mean, this was in the original trailer, everyone’s kinda already expecting him to slowly become E.G.G.