No, I repeat, it is not a Takua rip-off.

So this is the MOC form of my character for Okotan Adventures: Spider Saga.

Main order of business to discuss is the mask: I wanted to paint it, but unfortunately I need that mask in that color for a different MOC, so you’ll just have to use your imagination. The color scheme I wanted was a darker blue (probably something like 3 parts dark blue 1 part bright red) with red highlights, but it was not to be. Just pretend it doesn’t look like an alt build for Takua.

Sucks that I don’t have a G2 protector mask in blue. Or any G2 masks at all, for that matter. 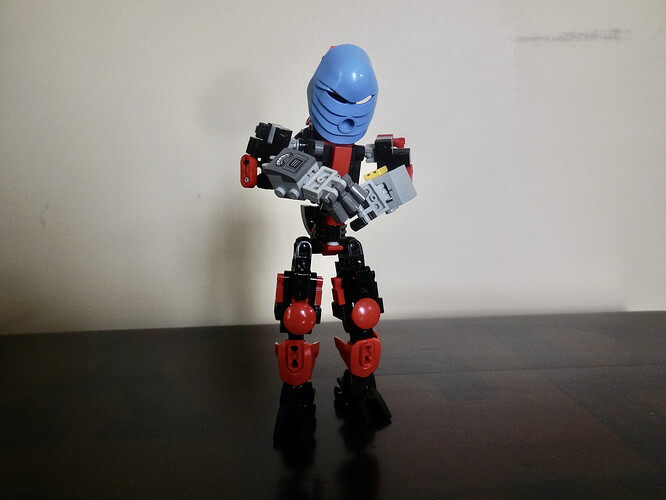 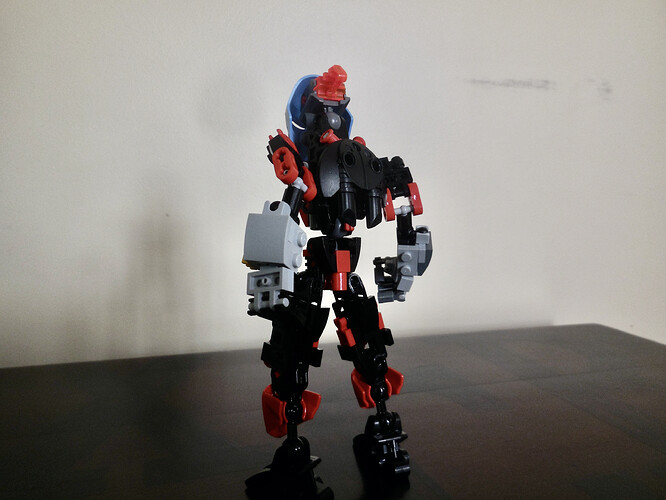 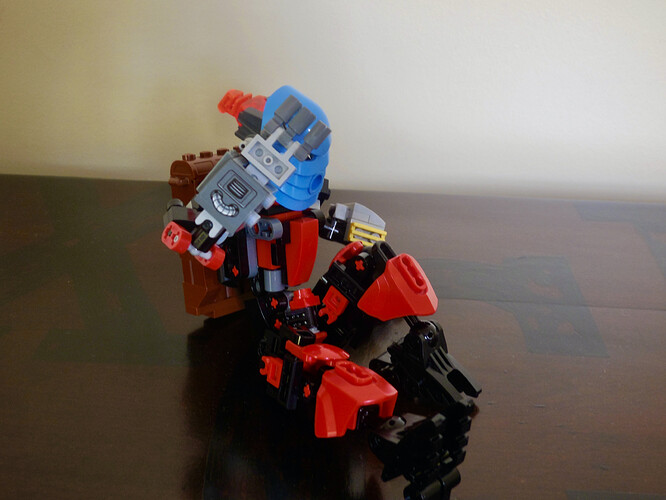 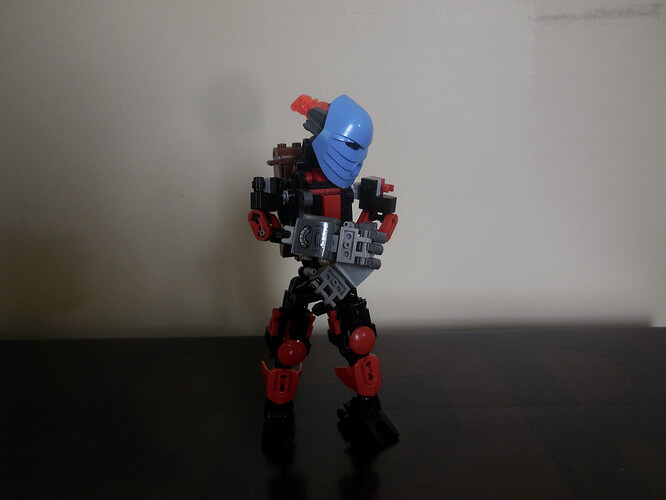 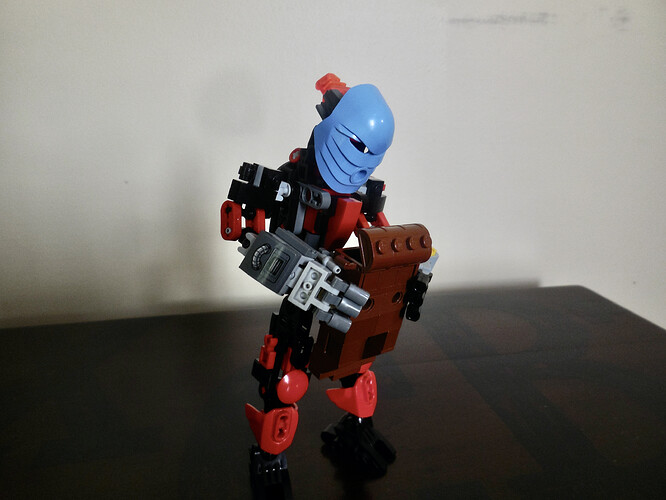 Didn’t actually realize how small the backpack is until I took this picture. 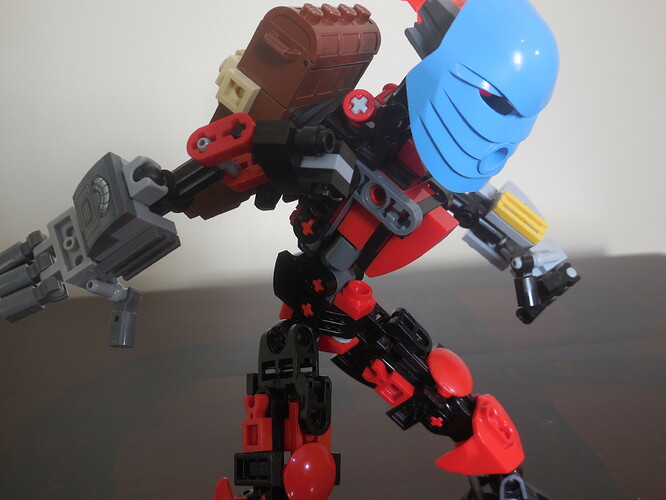 Unfortunately didn’t have 2 3x3 L-shaped liftarms in black, so I had to compromise on the torso a little bit.

This was really a foray into building constraction and system without excluding one another, and I’m … not really at all happy with the results. Could be worse, could be a whole lot better.

Again, doodoo camera quality but I did my best. I needed to take pictures of this ASAP so I can rip it apart and organize my pieces, cause I’m prepping to move my collection out of my basement to a different room and it’s a real mess right now.

Equipment: Taxon travels light: on his forearms he wear a pair of broken, many-times-repaired gauntlets, which may have had some sort of function in the past, but now only serve as barely makeshift armor. He has a set of small tools for tinkering with and repairing these gauntlets. Taxon also carries a backpack-esque chest strapped to his back, which he wears at all times. The chest is adorned with a large keyhole.

Appearance: Taxon is of average height and build. He was once well muscled, but in recent years his strength has atrophied significantly. A little bit narcissistically, he has painted his mask an uncharacteristic blue. Taxon’s armoring appears well kept, but many pieces appear to have had dents beaten out of them. (MOC incoming)

Skills and Talents: At one point, Tax was very skilled at crafting tools and weapons, but in recent years he has stopped such activities. He tells himself he still possesses these talents, but the validity of this claim has yet to be tested. Contrary to his appearance, Tax’s main physical skill is his speed and agility. Years of being chased by the predatory wildlife of Okoto has required it.

Intellectually, Tax, despite his somewhat frenzied level of activity, is very skilled at analyzing and solving problems.

Biography: Tax spent most of his life as a clan crafter for his village, creating tools and the occasional weapons from metals imported from the Earth villages. Despite a few incidents and accidents that resulted from Tax’s tinkering, he was a valued member of his community.

Until he wasn’t, in fact, a member of his community.

The call of adventure seemed inexplicable to everyone, including Tax himself, but one day he was simply gone, leaving behind everything but what he seemed to have on him. He claims he’s been wandering Okoto ever since.

Personality: Taxon is filled with a frenetic energy, constantly fidgeting and moving from one thing to another. He avoids talking about himself, but will gladly interact with others. Conversation with him is usually fast-paced, superficial, and brief.

In times of duress, Taxon’s energy level can either go to the extreme of panic, or dampen down to calmness, in which case he usually tries to take control and help get out of the situation.

Taxon also inexplicably has occasional moments of melancholy and seeming confusion. These bouts never last for more than a minute at most.

Flaws and vices: As judgmental as he is insecure, Taxon is oftentimes quick to make decisions about people he doesn’t know. He is vaguely egomaniacal, and while he hates attention, he loves to be in charge, and doesn’t always take well to leadership.

Anyways uh, thanks for clicking.

I really need the social interaction.

I like how he combines system, g1 parts, and ccbs.

Could be worse, could be a whole lot better.

i think this guy suffers from being too complicated. it seems like there’s too much going on.

That’s two Solar mocs in a week is this even allowed???

That’s two Solar mocs in a week is this even allowed???

hoo boy do I have news for you

hoo boy do I have news for you

you better have your moc for cordax’s community project ready.
or your self moc.

it’s your self moc isn’t it

FINALLY someone can revive that topic.

Today I am starting what I want to be a big community project to flesh out the world of hero factory! What you will do is create a hero factory hero. It doesn’t have to be a specific size, complexity, or system. It just has to be a humanoid with a hero core. If we get enough people to sign up, we can make a bunch of heroes to spread out the hero factory world! IMPORTANT UPDATE: Every 5 heroes entered will be part of a team. I will start with alpha 2, then 3, 4, and 5, and then I will move on to beta 2, 3, 4, and 5. Then I will go onto gamma, delta, and epsilon. RULES: You can enter a maximum of 3 heroes per person. To enter a moc, just post it here. You can create a moc topic to enter, but also post it here Your moc must have a hero core You must give the moc’s name You must give the he…