So, I’m bad about getting on here now.

How about the mask of stabilization? Would that work for my Makuta?

Wait, I thought we cleared that up already?

This is still about Shornos, right? You originally gave him a Mask of Mutation, but it turned out RSG only wants Miserix to wear it, so the compromise I reached with them was to change Shornos’ mask into the Mask of Scrambling which is basically a Mask of Mutation, only that it transforms randomly and only temporarily.

I thought that was just a temporary fill in…

That works too. Either way.

Your entry is due within the next 7 days.

You still need to add the updated backstory to Barrion’s entry.

He's got a nice girth there. Probably helps get some momentum for swinging large weapons, eh? All jokes aside, this looks pretty good. I like the look, although I think it could be a little less organic and more mechanical. It looks too smooth, yet also too rectangular. (His front, at least. His back is good.)

Oh I’m sorry about that

All 100 Makuta have been built!

Big thanks to everyone who made this happen!

As promised, I’ll say a few more things regarding the future of what we have accomplished here - but not right now. First I’ll put together a collage of all entries so that everyone can get an overview, then we celebrate. Expect it… soon. Hopefully within the week.

As someone who’s been following this project for a while, it’s great to see that everything is almost done. Amazing work everyone

I had forgotten that this wasn’t done yet

This was awesome to participate in! I had loads of fun creating my entry!

I can’t believe it’s already been almost four years since I started this project. And that only a about a week after I joined the TTV Message Boards and really discovered there was still an active Bionicle community. A week which as far as I remember I mostly spent contemplating the possibility to get a complete Brotherhood of Makuta together - and how, since it was clear I couldn’t do so myself in any reasonable amount of time.

In the end I decided to give it a try via a community MOC project - to find people who could help me achieve my vision of a complete Brotherhood of Makuta I had. And thanks to all of you who participated, thrugh your patience, willingness to contribute and continuous support this vision came true!

But there was more we achived than just this goal that once seemed almost impossible to reach. Looking at all the MOCs entered into this project, it’s apparent to me that content creators of all skill levels participated, and I’m happy I could give this variety of people the chance to contribute. I see a lot of people who gave their best then, and since have made tremendous progress in their MOCing skills, just like I feel I did.

Thank you again, and I hope the future provides you with ample opportunities to grab your parts and build more MOCs!

And now to what you’ve actually been waiting for ;): 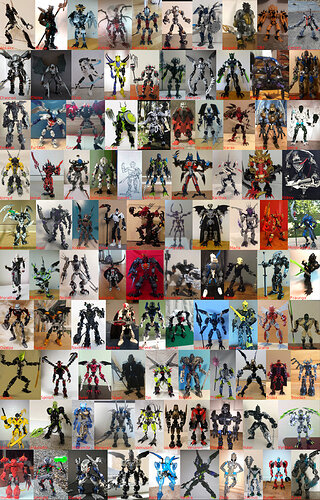 (Sadly, the original pictures of Jsasax and Krika were lost. Fortunately I had already drawn Jsasax way back, so I put in my drawing as a replacement - the original was more hunchbacked and had a tail and no cloak, though. For Krika I used my revamp.)
(open picture in new window/tab to be able to zoom in)

Now, as frequently asked, what are my plans for the future regarding this project?

And… I think that’s pretty much everything?

If you have any questions still, feel free to ask them!
Which one is your favorite entry?

(I’m not sure about TTV’s policies regarding project topics, but I hope this one won’t be closed so I can keep you updated on progress on the things mentioned above.)

Next up: Order of Mata Nui Community Moc Project
Actually, it sounds like a cool idea.
Might be a silly question, but what’s RSG?

And I have no plans of doing another community project, I fear. Especially since the new TTV rules don’t allow me to start one as far as I remember. (The Brotherhood Project was started before that rule came into effect)

A big problem with an Order of Mata Nui project is that there is an unknown number of members of many unknown species. What makes the Brotherhood work so well is that it’s specifically 100 members, who are all specifically Makuta.

I’m not sure about TTV’s policies regarding project topics

I don’t believe we have a policy regarding the end of these types of topics. It’s up to your discretion when/if you want to close this topic at some point in the future

Well, it’s been a while, so I suppose a little update on things can’t hurt.

Drawings:
I just finished drawing number 98, which means that I’m getting close to finishing those. I can’t say for sure when the last two are going to be finished, but it should be relatively soon.

Book of the Brotherhood:
This unfortunately has been on hold since… September or so. Shortly before christmas I handed in a document containing all the current Makuta information to RSG (around 130 pages

) which is looked through at the moment. Depending on feedback certain things might need to be altered or completely changed which is why I don’t see much sense in continuing writing Book of the Brotherhood entries in the meantime.

At RSG we’re currently finalizing the core Makuta information, and it was requested that Wreigth’s name be changed. Basically so it doesn’t sound like “wraith”.

Do you have any alternate suggestions yourself or should we propose some ideas to you?