So you know the drill your constructive criticism is always appreciated, and without further ado, hope you enjoy!

[details=Vience’s Backstory]After Bambu’s first try at training his first apprentice was a succes, he decided to recruit another.

This time, the new recruit shall be a very different one among the rest which were chosen. He traveled throughout the Earth to reach where Sentino Metallico beings were living, in Sentiopa.

The capital city where he visited is called Sentiano Manoco there he would find a military base where veterans of war where being embarked. As their time of services to their country was done.

There Bambu would find a individual which had quite a bit of a temper. The first time they met he noticed that this individual had quite of a vocabulary.

“What you looking at bub.” he said as he smoked a cigar but then decided to throw it on the ground as he stepped on it with is right foot.

“I’m looking at someone which has regrets.” responded Bambu, that individual spat on the floor as he said. “Whatever.” as he made his leave going to his home.

Little did he know that Bamub was following him.

The next day that individual was going to get a drink at the bar, he loved drinking it was one of his many hobbies.

Right next to him was Bambu.

“I know who you are Vience.” he said. “You are a War Veteran which fought for his country and won over a dozen of medals of honor. You are a one of a kind in this generation, it would be a shame to put all that work into just drinking everyday.”

Vience drank his bottle and said. “So what?” he asked.

“Nothing, its ultimately your choice on how you want to spend most of your days.” said Bambu as he left him.

“What the hell.” he thought as he too exit the bar and walked towards Bambu.

Vience told him that he should stop acting like he knows him, because that doesn’t mean if he read those papers that he is the man he thinks he is.

Bambu told him that he doubts himself and that is not the way of a warrior. Vience told him he doesn’t care about such things and that he needs to piss off.

Bambu told him a simple no, showing Vience that he does not have the situation under control. Vience being the hotheaded guy did not take it kindly and he started fighting with Bambu.

Vience was a skilled fighter and being a metalical being that he is would prove to be a match for Bambu, but Vience underestimated him mistaken that because he is old he cannot defend himself.

Their duel lasted for 3 minutes most, with the winner being Bambu he had Vience pinned to the ground.

“Its such a shame really.” said Bambu. “All that raw power and for what?” he asked sarcastically. “Drinking wine for the rest of your days…what a horrible way to die.” said Bambu as he released his grip and left Vience on the ground.

“But if you at least care to make good to your past, you would know where to find me.” said Bambu as he threw him a card with a location to find him the very next day.

Bambu leaves and Vience crawls towards the card and takes it. He sees that the location Bambu has asked was in a different country and was quite far away, it was quite the journey.

A week has passed and Vience finally decided to make good to his horrible past. Vience would find conventional means to travel to country to country. Finally he arrived Ysmeania Bambu’s country.

As Vience traveled throughout the places and cities he would find himself where the Prime Palace is.

He saw the very very very long set of stairs he looks up to the skies and sees the sun was up and brighter then ever.

He sighed significantly realizing it was already too late to go home, he claimed up the stairs up to the mountain where the Palace was.

Vience finally managed to climb up the stairs, it did took awhile for him to reach the top. He saw Bambu floating as he meditated with eyes closed and he spoke.

“Aa so you finally decided that you want to make good to your past.”

Vience scoffs. “What do you know about that, your just an old fool.”

“You will be quite surprised on things I do know that are unknown to you.” said Bambu.

Bambu obliged and he stood up, opening the gates of the Palace entering, followed by Vience the door close and there Bambu showed him everything he needed to know about the Universe he is in and its threat.

In the end Vience admitted that there was a cause to fight for, and he requested that Bambu would train him and help him redeem himself and his past.

“The training begins tomorrow, rest, you will need it.” said Bambu.

The next day Bambu taught him the basics. Vience would prove to be a quick learner but he was a bit hotheaded and didn’t had much patience.

Bambu taught him self control, it would seem that it was quite a challenge for him because he mostly failed the tests.

In time Vience learned how to become more patient and not anymore so hotheaded, he still can get angry at times but that is if you are really trying to piss him off.

Vience swore his allegiance to Bambu and that he will fight to maintain the peace throughout the world and protect those in need which are attacked by the evil Outriders.

For the time being he hasn’t faced a Outrider not yet, since they haven’t attacked in awhile, mostly Vience trains with Voltex.

The two always wanted to see who was the stronger one, most of the times their duel would end in a draw.

For them that is not satisfying they want to know who is the better fighter and so most of the times they would challenge themselves to do impossible and dangerous tasks.

Sometimes Vience won and sometime Voltex won, keeping their score, almost being equal the next day.

Bambu saw that this was getting out of hand and he stopped it before it was to late, he told them. That they are equal in strength and that they should stop fighting each other and they should start learning how to work together.

Voltex and Vience in time learned how to work together in battle, when they spar, their duel is friendly competitive.

And so would things go till Bambu decided to recruit another warrior…[/details]. 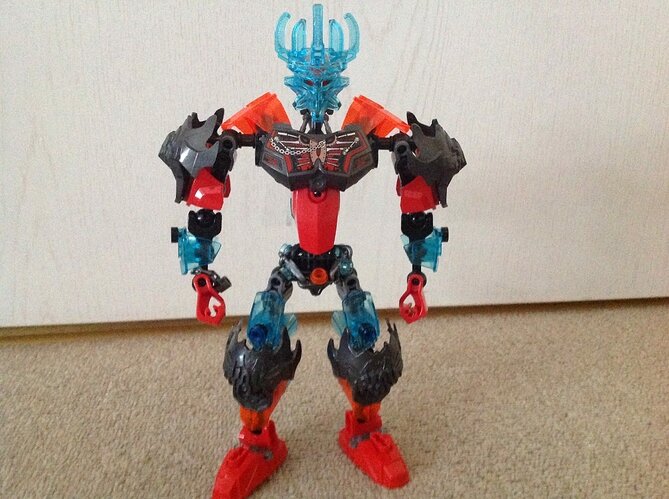 Weapons: He wields two Titanium axes, which are powered by his own strength. And can cut through almost anything and are merely unbreakable. 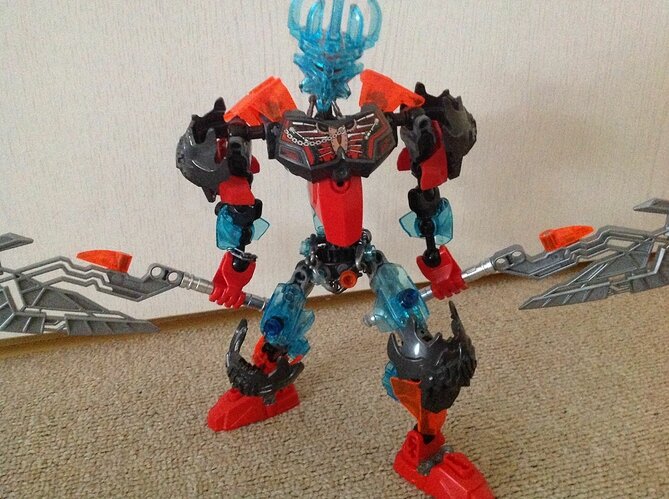 The translucent red bohrok eyes are the source of his connection through them he channels his strength into the Axes.

Abilities: His body has components of energy, hens the translucent red and blue color overall his body.

Been a being composed out of living Metal it gives him more of an advantage then a Human or any other race.

He is the peak of modern and future of any generation, his complexity is off the limits only a few geniuses in the world have duplicated the Sentino design but failed.

He can punch through walls with no problem, he can lift up to 40 Tons with ease, he has enhanced fast reflexes and can ran faster then a world champion marathoner, reaching over 200 miles per hour.

He has a longer lifespan then other races, matching that up to the Ysmaen, though not all live to get as old as them.

Powers: He is one of the strongest of his kind, any other Sentino Metallico standard powers and abilities, he possess them but they are two times as strong. Meaning he is a bit stronger, faster, more durable, immune, clever, agile and can do pretty much what Humans or any other mortal races can’t…the impossible, though he has his limits and he is not unstoppable. 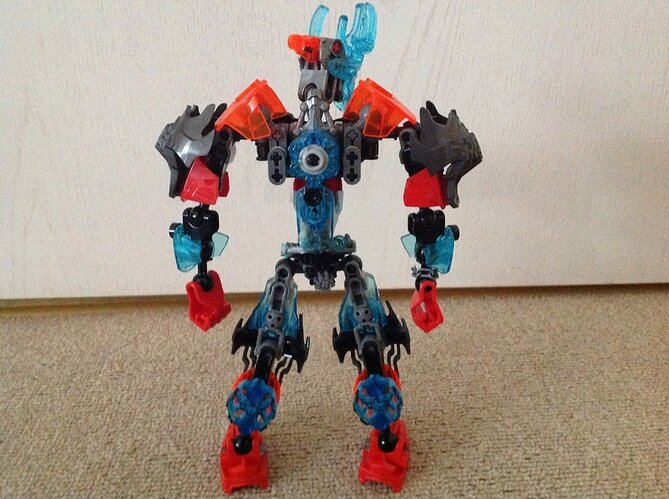 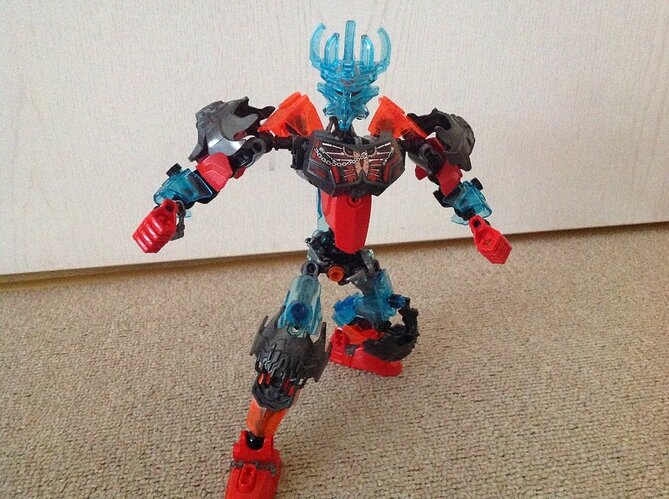 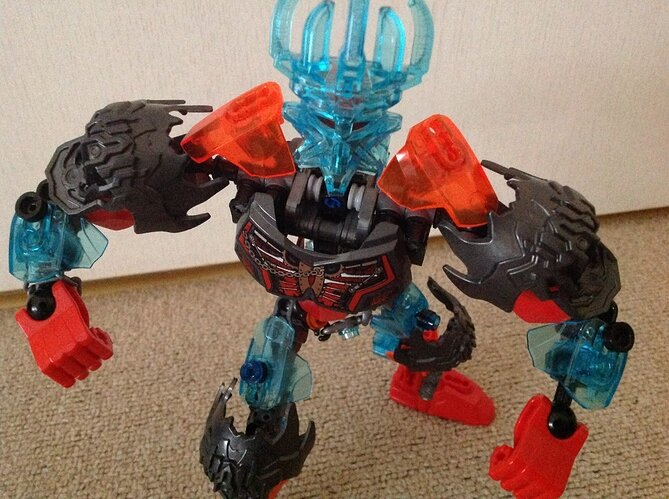 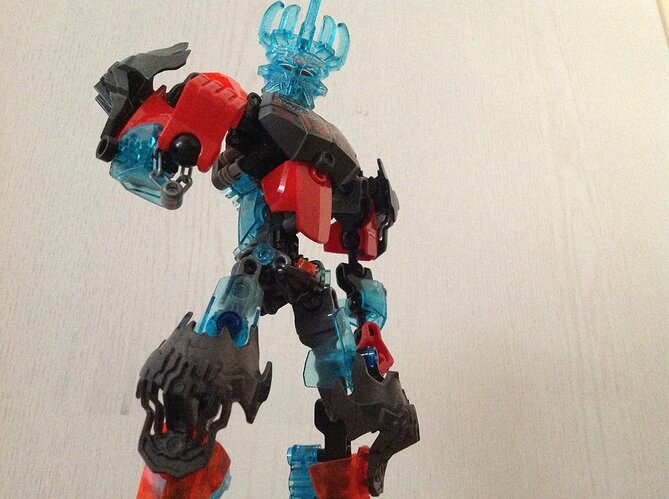 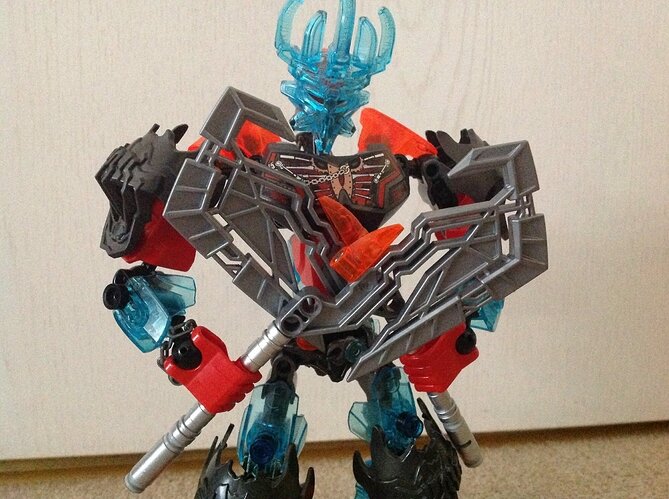 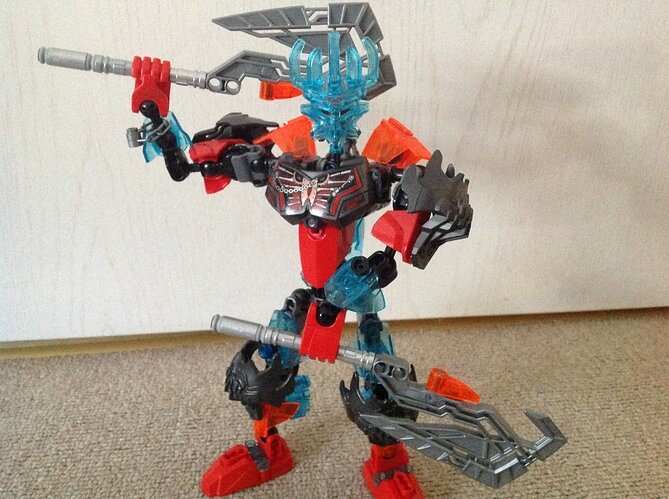 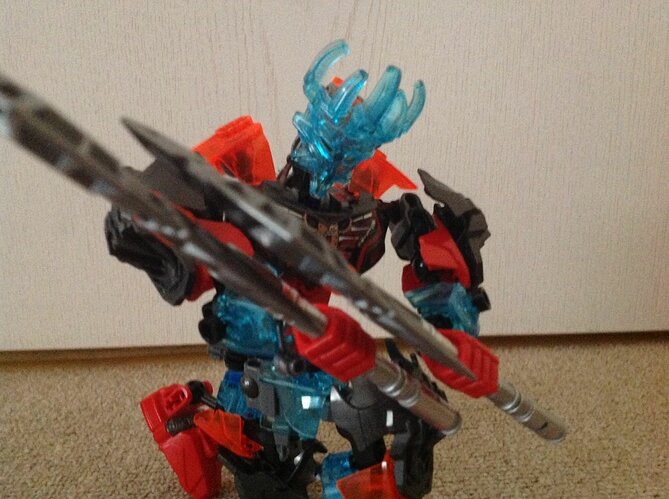 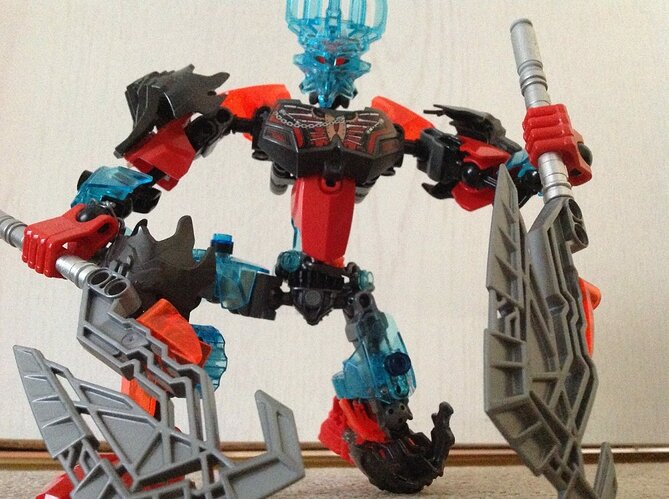 Here is when Voltex and Vience did not find a common ground and they started to fight. 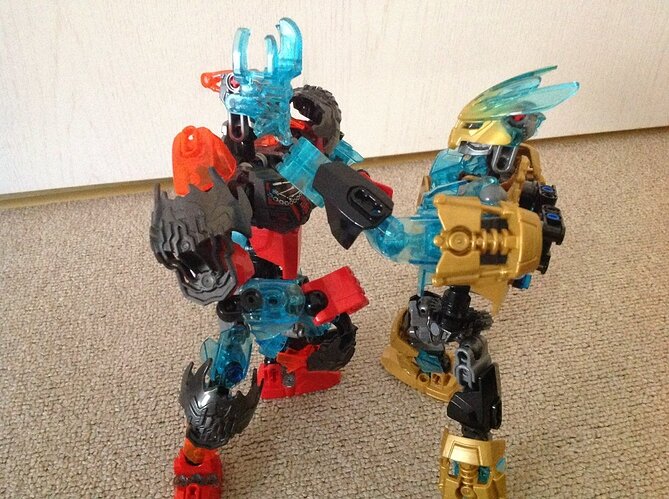 Vience: “What is thy beading, my master.” 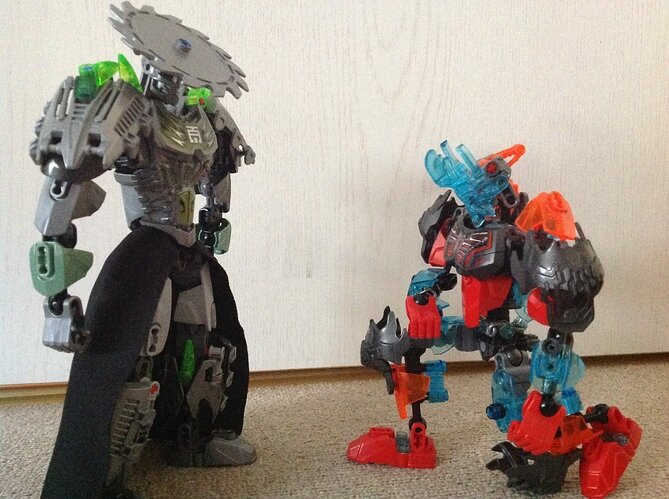 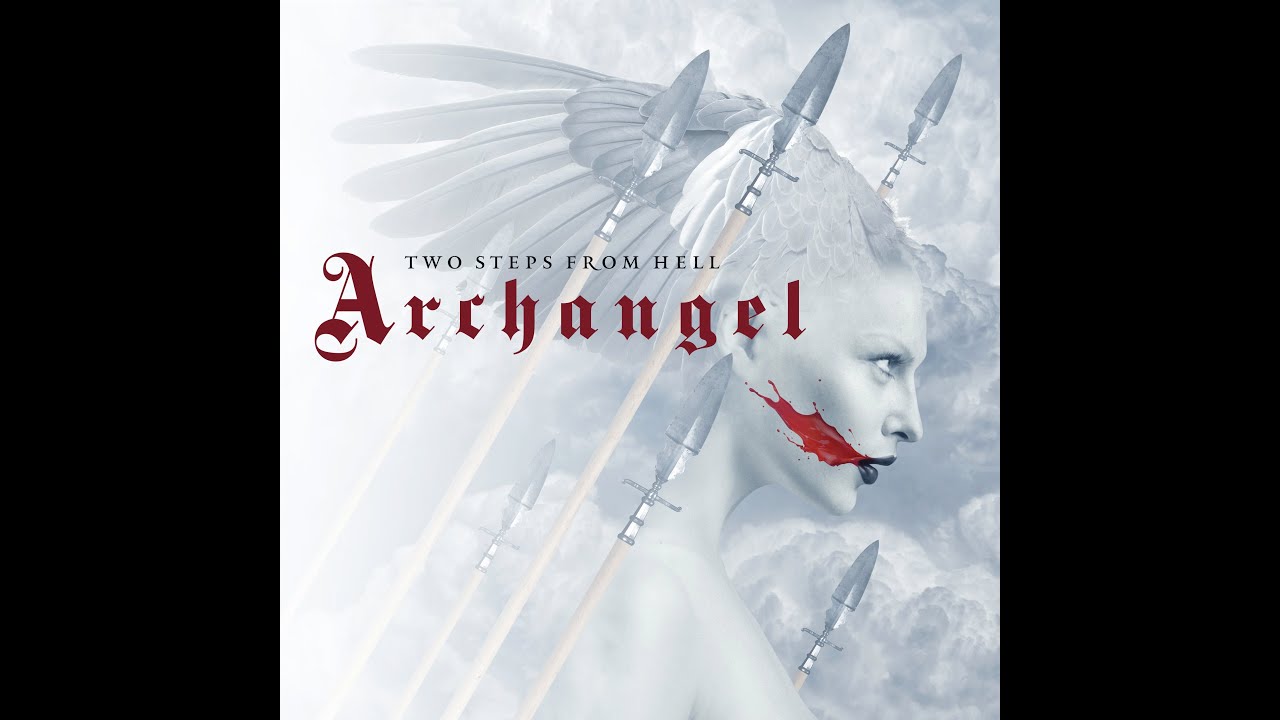 I find this feting since he is so strong, his strength can be compared to a thousand men.

Before I go, I want to give you these two links to my two other mocs I did. Why, you may ask?

Because I have changed their backstory and made it more fiting to my Universe’s story.

And I described what kind of power Bambu and Voltex have, so if this interests you then go ahead and check it out.

And if you are as well interested for the main story here is the link as well, though fair warning the story and the topic is not 100% complete, it is a work in progress.

Vience and other characters do play a roll in my story, I’ll mention them through Moc Topics or in my actual story as I inform you who is in the story and what kind of powers they posses along side every information you’ll need to know.

Alright that’s it, your constructive criticism and feedback are always appreciated. Have a nice day, bye!

The name sounds like a girl name to me…

I don’t understand this: 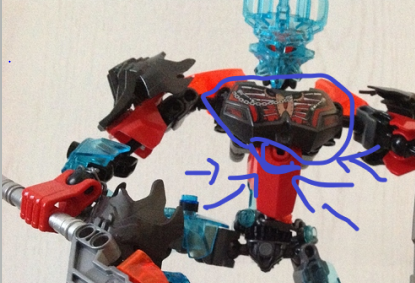 This makes me think it can move crazily around,could’t it be just a little lower? Or did you made something to stop it from moving?Whatever.

I feel you should remove the trans-orange, and replace it with trans-blue.

Or did you made something to stop it from moving?Whatever.

I feel you should remove the trans-orange, and replace it with trans-blue.

Alright I’ll think about that though I wanted to make him blue with bids of red color.

Alright guys n’ Dolls. It’s come to our attention that there’s arguments happening again over MoC’s backstories. While I encourage all of you to create awesome backstories for your MoC’s, I also want to remind everyone that they are not the central focus of the post.

If you want to write a novel and be critiqued on it, write a novel. We have a category for that. If you want to make a MoC make one. However, if you’re going to complain about an MoC’s backstory instead of reviewing the MoC, I strongly suggest you consider the content of your post.