The third MOC arrives! After the pictures I’ll do a bit of a blurb about all these MOCs backstory, since making up stories about your creations is one of the joys of making Bionicle MOCs ain’t it? This dude’s got some nice articulation and some ideas I like, but he’s probably my least favorite out of the whole bunch due to how skinny he looks in some areas. He’s first on my list for reworks, so please let me know if you have any advice! 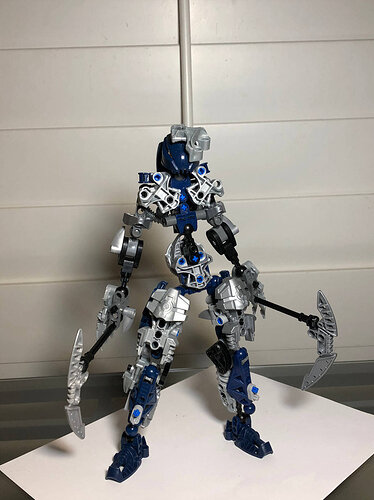 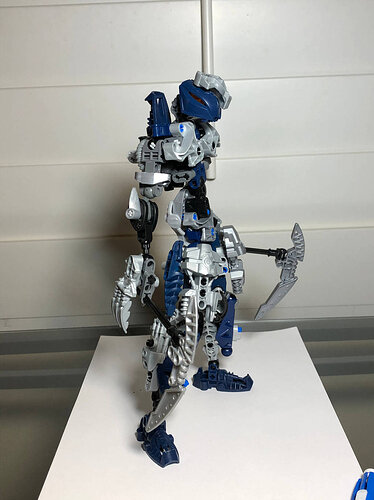 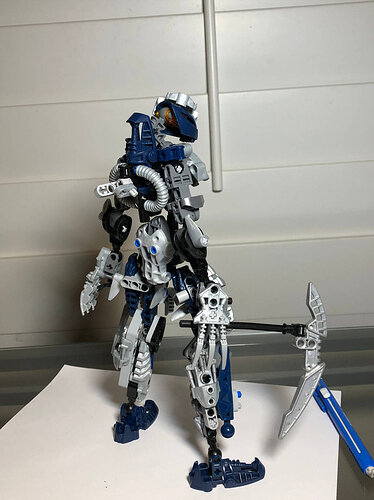 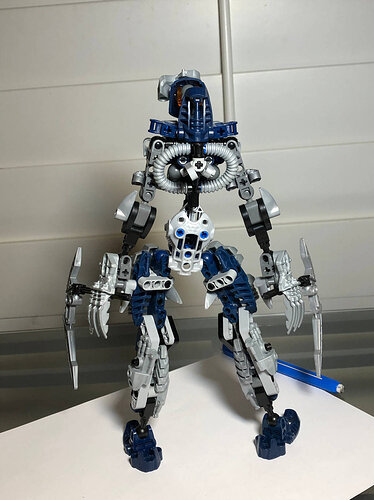 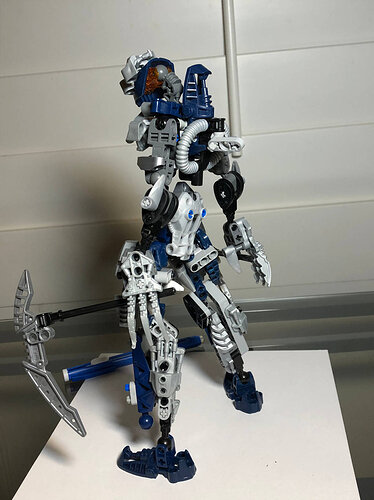 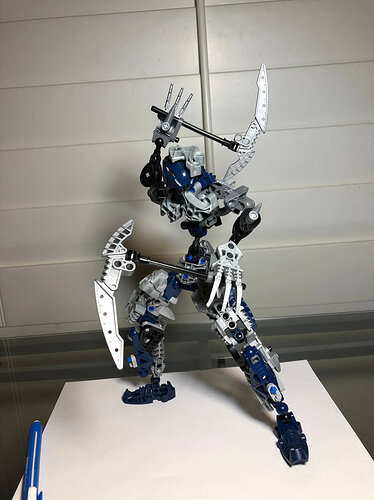 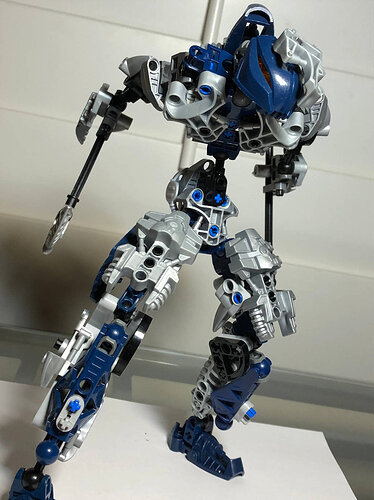 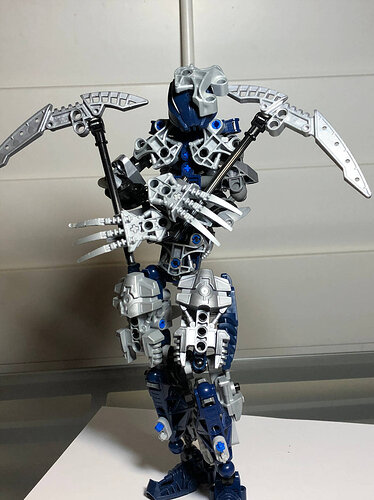 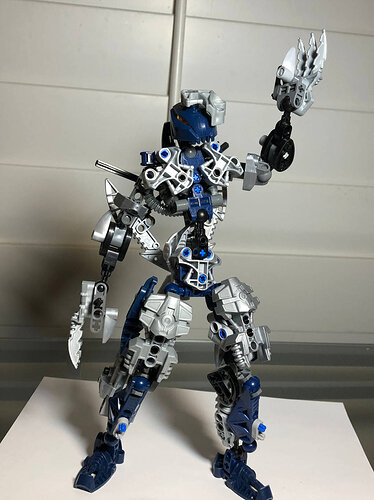 All the pictures are also on my Deviantart page, as are all the other MOCs I’ve made.

This MOC was a little directionless at first. I knew I wanted to make one that was skinny with a lot of waist articulation, but I didn’t have many ideas beyond that. While struggling to come up with a theme or some sort of inspiration for this guy, I tried putting a bunch of different pieces on top of the head to see if any would work, and this emo-hair looking design was so hilarious to me that I decided to build a really edgy assassin character.

Alright, now for some lore! Gather 'round folks, this could take a while.

One hundred years ago, out in the far reaches of the sea, lay the continent of Daes, home to a race of sentient beings who called themselves Daethians. Developing in complete isolation, four kingdoms had risen at each corner of the continent, and all of them struggled for power. The war had been raging longer than any could remember, and the end was nowhere in sight.
One fateful day, however, the Eastern Kingdom made an amazing discovery. Hidden deep within the earth, miners stumbled across a strange substance; a silvery-blue liquid exuding power and energy, which they called God Tears. It was discovered that those who drank from the river became possessed with a power far surpassing that of any being on the continent, but only those worthy to wield it could survive the transformation.
Quickly, the king of the Eastern Kingdom gathered 5 of his best warriors, whom he deemed worthy in different aspects;
The Executioner, whose strength was unmatchable,
The Hunter, whose speed was unfathomable,
The Paladin, whose defense was unbreakable,
The General, whose strategy was unbeatable,
and The Samurai, whose determination was unshakeable.
With the power of the God Tears and the Five Great Warriors, the Eastern Kingdom ended the war, and the Eastern king mercifully allowed the other kingdoms to retain control over their land, while he established the Central Kingdom to watch over the continent. Rather than abuse its power, the king decreed that the God Tears be locked away, never to be used again lest Daes and its people ever fall into great enough danger.
Their duty complete, the five warriors went their seperate ways, and passed into legend as heroes. Some say that the power of the Tears made them immortal, and that they still protect the people of Daes from afar, but others say they died a long time ago. And as such, the story of Daes’ legendary warriors was complete.
…or at least, it should have been. After the “unfortunate” passing of the king, power was succeeded by his recent bride, The Queen. Driven by her greed, the Queen reopened the path to the River of Tears, and began building an army of powerful soldiers to consolidate the power of the other kingdoms. Subjugated by the vicious rule of the Queen, the people of Daes’ only hopes for justice are the heroes of legend, wherever they lie…

The Hunter was a loner at heart, and difficult to work with. However, he was invaluable to the other warriors thanks to his amazing feats of agility. In rare cases, he was also known to be a terrific comedian. Although an assassin by trade, he did not relish the deaths of his enemies, and only killed when absolutely necessary. He was more flexible in his code when it came to other crimes, however, and frequently stole food, money, and other goods from his comrades to use for his enjoyment (they usually didn’t notice until later). The power of the God Tears granted him the ability of Quantum Teleportation, which allowed him to move at unquantifiable speeds, so long as he was outside a person’s field of vision.

Phew! That’s a lot, I know. I’ll try and keep it shorter in the future, but I felt like the backstory needed a little more explaining.

Well, that about sums it up, so remember, criticism is welcome and appreciated, and more will be coming soon! Thanks for sticking around :3 .

Some nice builds here, though that waist is way too thin. Having the glatorian neck-piece out front really undoes the shaping behind it, in my opinion.

The Metru chest on the head is out there tho.

This is one of the few MOCs with a Rahkshi head I’ve seen that’s not super generic looking or bad. So good job with that.

The head idea is interesting, but that connection between the waist and torso doesn’t look so good to me

He, looks like a she.
Plus; he needs a friction adder joint in his waist

Yeah, that waist could be a little longer/have some more coverage, that and I first thought he was female before reading about him, so there’s that. Onerall pretty good though.

wait, that’s supposed to be a he?

I like the MOC, but that does not look like a hunter to me. His weapon should be either a bow or a rifle, but not a pair of swords, if you ask me.

that does not look like a hunter to me.

Yeah actually, his original name was “The Assassin,” but that’s apparently a bad word so I couldn’t put it in the title

And, thank you very much to everyone who commented! The waist was obviously everyone’s number 1 issue, so I made some improvements: 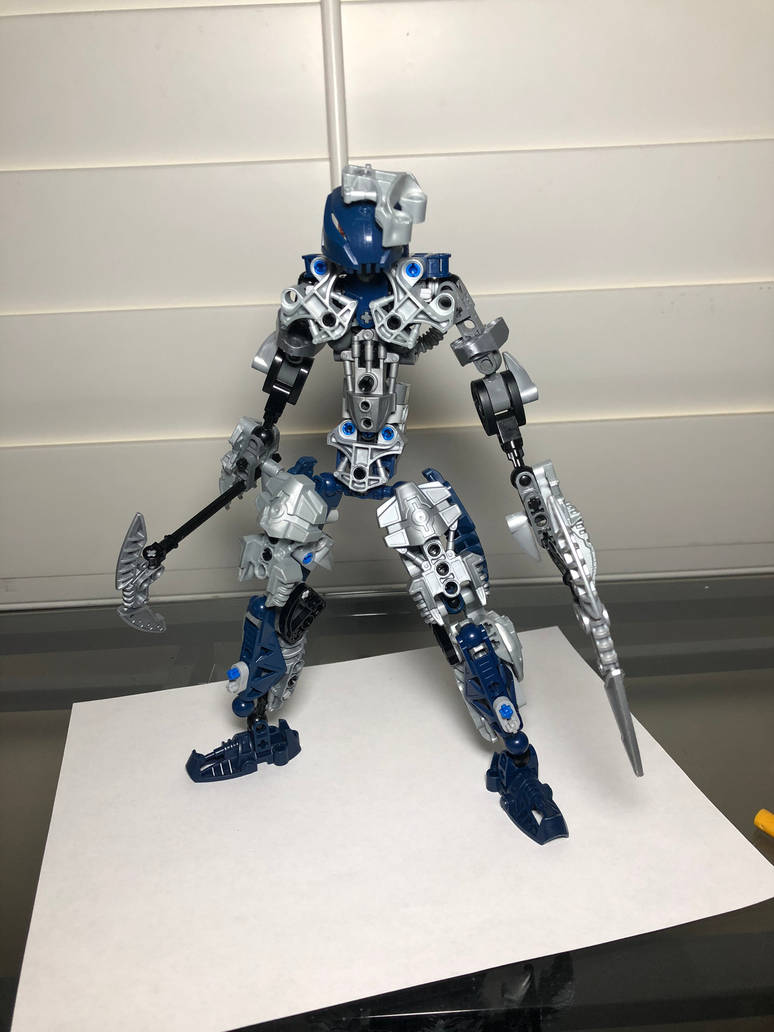 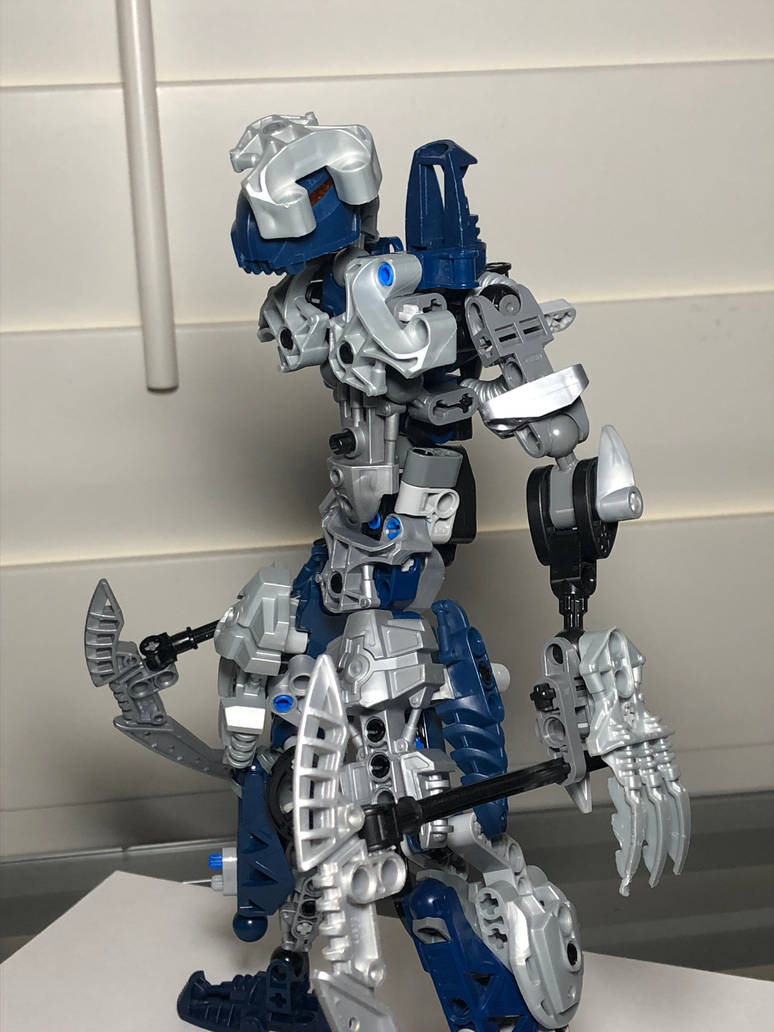 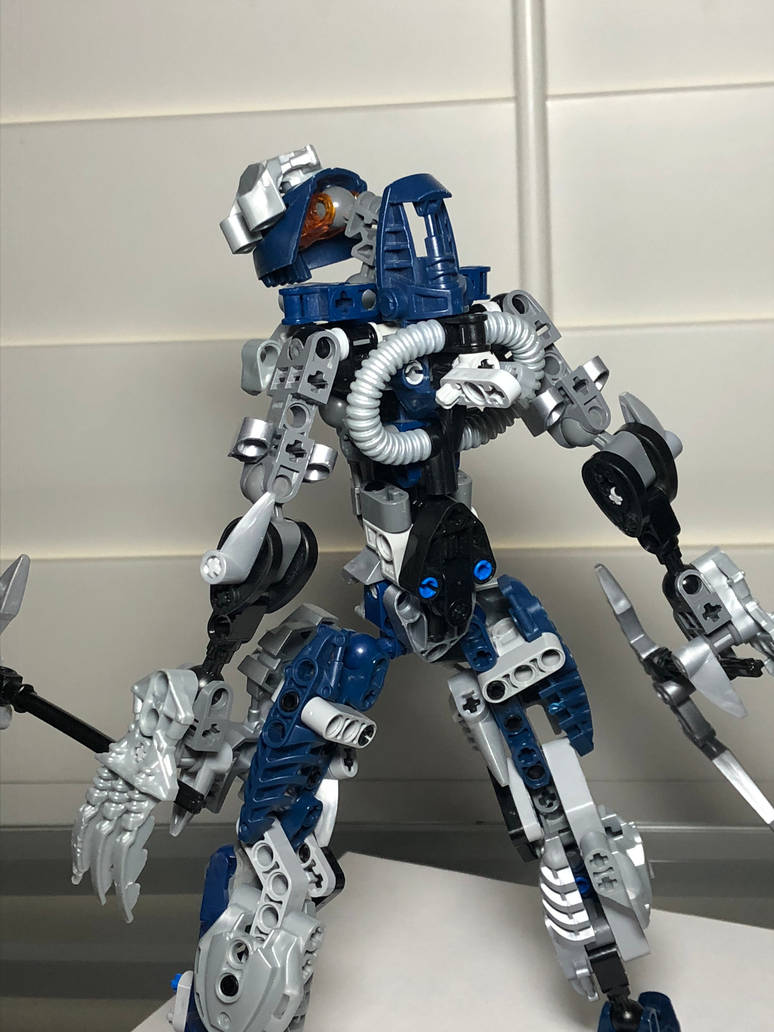 Hopefully this fixes some of the issues!

This is much better! Good job!

You found a way! That looks far more complete. Does it still have waist articulation?

Yeah, that looks way better, but does he still have waist articulation?

You found a way! That looks far more complete. Does it still have waist articulation?

Yeah, that looks way better, but does he still have waist articulation?

Yep! It’s more limited due to the armor, but he can still bend around in any direction :3 .