All I’ve got at the moment are LDD MOCs of…
THE TOA:

Untitled 1.png1273×580 654 KB
The main six we all know and love!
Unique features-
Onua’s legs are different from the rest.
Gali has flippers attached to the back of her feet.
Lewa’s swords can be attached to his back for flying.
Description:
Onua is a mathematical genius. Always doing something, he dislikes when others run off without a plan.
Kopaka abides by logic and logic alone. A man of few words, the only time he says anything is to insult another for his or her incompetence; it never ends well.
Tahu, the leader of the toa, is everything a leader shouldn’t be - cocky, arrogant, and, sometimes, just downright mean. He’s gotten this far, though, so it doesn’t look like he’ll improve anytime soon, much to the dismay of his teammates.
Gali is the complete opposite of almost everyone whom she considers an ally. She is kind and friendly, and would also rather plans things out before rushing into a battle. What little shortcomings she has, she knows, and will do her best to change.
Pohatu is a speedy daredevil who will do anything to win. Extremely competitive, he usually ends up annoying those who he is supposed to protect by boasting of his feats time and time again.
Lewa is the jokster of the group. His attitude of just getting things done to be done has worked out for him so far, but only time will tell, if he really has the heart of a hero.

Untitled 32.png1274×583 658 KB
Descriptions-
Grang is a guard of the main city of the island. He is stern and tough as he believes it’s his duty to protect his land.
Uni is the communications operator. He is paranoid and dislikes commotion.
Panya is a desert explorer. (don’t really have a personality for her yet)
Orcan is the writer of the Elders’ secrets and the city’s historic actions (he’s the chronicler). From recording history, he fears that his city might soon be history!
Krast was once a fierce veteran of the army whose leg had to be amputated due to a ferocious battle. He now trains (climbing up the sides of mountains) wishing to be out in battle again.
Venshri: A huntress who arms herself for the inevitable, she is always serious and even ruthless at times.

Untitled.png1270×584 663 KB
Warriors of the past, these beings lead the inhabitants of the future.
Descriptions
Unota believes that the best defense is a combination of both tradition and technology. Because of this, he is often indecisive when the group argues over which path to follow.
Gakan is one who many question about his decisions. While well-liked, he is more of a follower than a leader, and often never cares who’s been decided.
Anest is a fierce woman. Having seen the price of battle multiple times, she knows what can happen when friends fight. In their meetings, however, her fiery temper often gets the best of her, making a bad situation worse.
Heteren considers himself a scholar. Extremely observant he often never goes any period of time without finding something that fascinates him. Others get annoyed by this, but quickly remember that he is a man of knowledge, and so,leave him be.
Iluna is the youngest of the Elders but shows ingenuity and skills that the others seem to lack. Technology fascinates her, and so she often is criticized by the Head Elder.
Rajal is the oldest of the Elders. He has seen much through his time, and as such, the Matoran gave him the title of Head Elder. Growing older has made him foul, however. He resents anyone and anything that doesn’t correspond with tradition, and he often instigates arguments between the group.

That’s all I’ve really got for now, but I’m working on some…
Some future ‘bad-guy’ concepts! 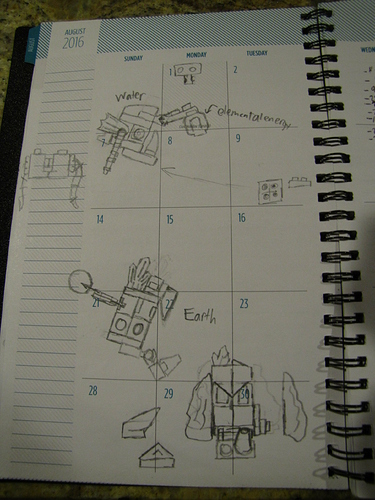 What do you all think?
Do you like the looks of the characters? What about the descriptions?
Do you think it matches the feel of Gen 1 or the simpleness of Gen 2?
I appreciate all constructive criticism and feedback!

Thank you in advance!

This is a very cool concept and I like the diverse personalities. However there’s one thing that’s bugging me…is it pronounced “Nay-tus”, “Nay-toos”, “Naw-tus”, or “Naw-toos”? (don’t want another Lewa fiasco

Even though it has it’s own pronunciation (it’s a real word) I’ll be pronouncing it “Naw-tus.”

will keep following it

An overall interesting premise with equally interesting figures. I love their diverse personalities and the distinct look that each bears.

A few seem a bit basic from a set buying point of view. Krast and Kopaka have a very similar feel overall despite the differences, though i would say that i’d probably collect the entire series if they were real. I’m especially drawn to Rajal who i feel could work as a villain and Unota who could work as a traveller through time or some kind of desert explorer.

What about the descriptions?

The descriptions are interesting and i can tell you’ve put a bit of thought into each of them and how they would interact as a group.

Do you think it matches the feel of Gen 1 or the simpleness of Gen 2?

Its kind of a mixture, the descriptions for the Toa are fairly simply - which can be a good thing as it’s easy to differentiate them and tell them apart.

The Matoran being specific feels more like a G1 element - though i must admit that i’m unsure how the other matoran would look.

The Elders seem good for a basis of either leaders or villains, Rajal as mentioned seems like he could easily betray the rest of the team simply because he doesnt want the rest of the tribes to progress from the traditions of the old ways - which could lead to a rather interesting concept of querying ‘To what extent do traditions matter in a society where new ideals and ways of thinking are being introduced’

What do you all think?

I think overall that it looks good. Though i’m unsure what you have planned for the future bad-guy given the sketches. They appear to resemble some kind of flying mouths that have elemental additions, which i feel could work well as swarm villains such as the Bohrok.

Before I begin, I want to apologize for the rally long wait! But I’m sure (I hope…) that you all understand because the holidays can indeed be busy!
@Zekester
@Middlefingerstudios Thank you both!
@Stoax Thank you! I try my best with diversity, despite LDD’s limitations
@Scarilian Thank you for the feedback! The Elders, despite their harsh personalities, are on the side of good, taking on a Turaga-like role. As for the bad-guy sketches, I should have mentioned this, but those are just the designs for their heads; I don’t really have any bodies yet! I’m thinking that, as of now at least, they are not going to be swarm villains, but they are still concepts so who knows!

Thank you all for the feedback! Another reason that I took so long was that I was writing the beginning ‘chapter,’ if you will, for the main story. And here it is!:

A lone guard stood watch atop a tower.

The torch she held crackled as a chill breeze swept through the dark, and she shuddered. She did this not out of fear, however, for she was never afraid, rather, it was the cold that fazed her, for she was not used to it. Belonging to the Region of Fire, the guard was not used to a lot of things - the water, and the splashing of waves against the shoreline, the moon, and its radiance projecting over the ocean, and the sky, holding that lantern and the stars in its grasp.

Yes the stars, she thought. The guard’s face relaxed as her keen eyes gave into the night sky. How she loved the stars. The twinkling gems sparkled, as if calling out to her, and she answered back with a sigh of gratitude. She savored this moment and all the others like it, for in her homeland the skies were filled with volcanic ash and soot which blackened the Heaven’s blanket day or night. It was because of this, that the guard treasured the stars, and embraced them, and, in the end, loved them so very dearly.

And it happened to be that on this night, because of her compassion for them, her keen eyes were able to spot one star that was different from the rest.

“A shooting star!” she exclaimed, trailing it through the darkness.

The guard watched it dance through the nighttime sky until arching downward into a flaming spiral, it did, seemingly aiming right for the island itself.

Her eyes went wide. “No,” she said taking a backwards step, “Mata Nui, let it not be!”

Dropping the torch, she raced down the tower’s ladder to wear her partner slept, a plan already forming in her head.

She tried again, this time more directly: “Reis, wake up!” yelled she, after shoving the guard hard onto the floor.

His eyes opened, and he sat up immediately. “Cleya, what’s wrong?” he asked urgently. Then, in a more playful tone, he added, “Were you getting lonely out there?”

“Shut up, Reis! This isn’t the time for your stupid jokes!” Cleya responded. She quickly addressed the situation: “The fables of the Elders have finally come to pass!”

“Yes,” she replied, “I saw a comet headed right this way!”

“We need to warn the villages!”

“Captain,” he started, astounded, “The honor of the discovery of such a threat should go to you…”

“Two things, “ Cleya said as she opened the tower door, “One, you know that our Elder intensely dislikes me for being a female guard, and two, I was never a fast runner, now go!”

Reis ran a few steps before he turned his head and, with a grin, stated, “For the record, i think that the fire region needs more women like you.” Reis saw Cleya smile under her mask. “…After all,” he continued, “it would be a lot hotter then!”

Cleya shook her head as she watched a laughing Reis rush into the night. Then, in the opposite direction, ran she, herself. The comet had covered incredible distance, and would crash into the ground within seconds. Cleya felt another breeze brush up against her armored body and again, she shivered. Although she would never tell anyone, this time, Cleya was not fazed because of the cold. This time, she shivered out of fear.

So, what do you all think?

I’ve been working on some artwork!
They’re made with Flipnote Studio on the Nintendo Dsi.

They were made without reference, so they aren’t perfect by any means, but I like them! I do feel as though the background for Lewa hardly even looks like trees, though!

In other news, I am working on Chapter 2 for my story, so that’s going to be coming, eventually.

But back to the artwork; What do you think? Feedback is appreciated! Thank you in advance!