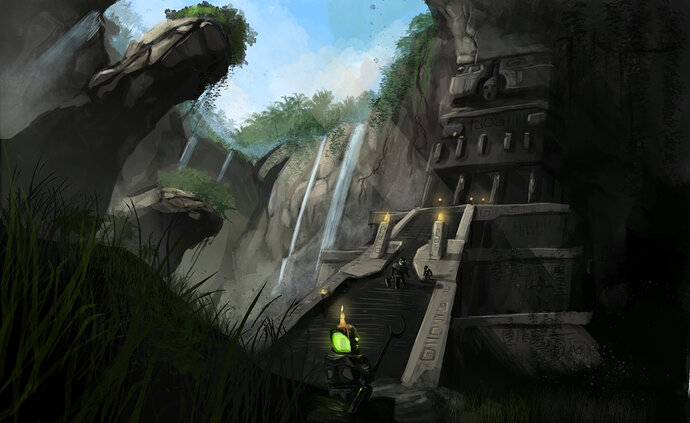 The steps are part of a rite of passage for the scholars of the Earth region The steps are excruciatingly long, but they are said lead to “ultimate power.” They are a test of the will and patience of each person who accepts the journey upwards. The stairs lead to the Temple of Terak, which contains a vast library-archive, because knowledge is power. It is a pilgrimage that must be completed alone, for this is the only way to test the limits of one’s patience and persistence in solitude. The steps also teach the value of hard work and meditation. The steps are said to be able to turn a greedy man into a wise man, one who would appreciate what’s at the end of the climb, that is, if he completes it. It is only when he reaches the top that he can then join his “brothers” in celebration of his triumph, and in scholarly practice. These monk-like scholars have access to much more information than anybody else on Artahka. Their archive is revered across the island.

The stairs begin at the deepest area ever explored underground, and they continue upward to the highest mountain in the region, Mt. Xia. You start in a claustrophobic cave of darkness, and you slowly climb upward, out of the caves and towards the light until you reach the summit. Knowledge, meditation, and scholarly practice are all highly valued in Tiro. The Tiroan society consists of two primary types of roles people can serve: Scholar or Miner. One would not be excluded from becoming the other. Both jobs are encouraged and understood as important parts of their society.

Being underground for so long makes each Tiroan feel at one with the Earth, a feeling which is at the core of their society. The ritual betters their minds and bodies. It is commonly begun as a coming of age ritual, but older Tiroans are not prohibited from choosing to undergo it later in life. To complete the ritual is the highest honor one can have in their culture. First, each person must spend a certain amount of time underground with only a drill and a book for comfort. He or she will mine for a while. This not only teaches valuable life lessons and instills important values in them, but it helps the society as a whole. This is what carves out and builds their architecture, their homes, their cities, etc. It keeps the society running, and it’s a self-fulfilling cycle of work, knowledge, and enlightenment. This is why the Tiroan society is so knowledgable and peaceful.

After a time, each person is brought to the deepest section of the caves, this is where they will decide whether or not to begin the climb. They will be told it’s a long and arduous journey, one that pushes the body and mind to their furthest limits. It is fine to say no, they will just return to their everyday lives and their mining jobs, a perfectly acceptable, and necessary role in society. If they say yes, then they will climb the stairs in hopes of reaching the temple at the top, at which point they will be invited to become a scholar of the region. Neither option is a punishment or a reward, they’re just different paths one can take in life. Both are respected in their society, it’s just that the path of knowledge is highly encouraged.

Vorahk could never complete the climb, but he could never settle for mine-work either. He always hungered for the summit’s bounty, but he could never get it because of his impatience. He became disillusioned with the rituals and traditions practiced by the rest of Tiro. So he rejected knowledge and the trial outright, as well as his village. He soon found a new path, Norik’s cult of Makuta. Vorahk’s hunger for knowledge of Artakha’s true history, and for the power to control it are the things that drive him. He doesn’t need Tiro’s archives, only Makuta.

This idea for Vorahk’s background fits in nicely with the [pitch] (Vorahk's Origins [Idea][Character]) made by @JediTimeLord824 so both of them could be used in his origin.