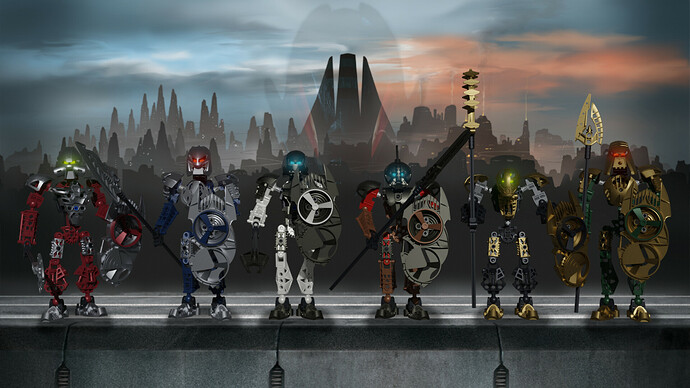 Hello! These are my Toa Hagah entries for Gaaki, Kualus, Pouks, and Bomonga. These were designed in Stud.io and rendered using Blender (Thanks to Petrus, HahliNuva, and Perp3tual for helping me with that).

The red on Pouks makes him look weird to me.

Rhotuka do not exist in white

Wait I think I had one in white. Maybe its just a dual molded one.

Rhotuka do actually come in white, commonly available in both Kualas’ Rahaga form and the 500 Piece Tub from 2006. It’s black that they don’t come in.

Oops! I forgot to double check that. Thanks.

Finally, yes, the background is Metru Nui, and they were not really in Metru Nui

Except they were in the Dwellers of darkness.