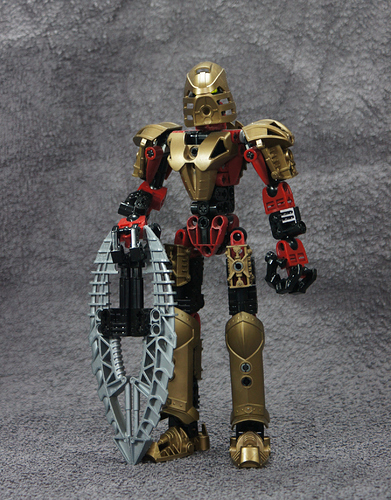 Finally got that last part to finish Lhikan. The main thing you might wonder about is why he doesn’t have his actual swords. There are two reasons: a) I don’t have any spare ones and b) enabling him to actually grab them with fingers is at the very least very difficult.
In any case, his swords were always super oversized, so I felt like Bordakh staves would do the job, too, due to their similar form. Unfortunately it’s slightly illegal to put them together into a shield like this, as their tips are not straight but slightly leaning inwards. 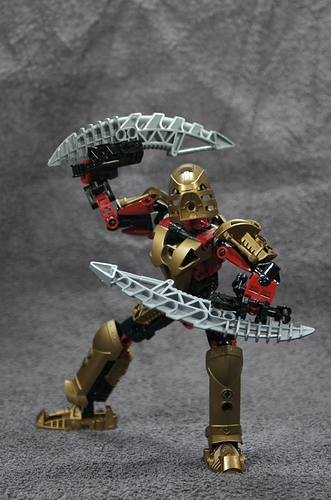 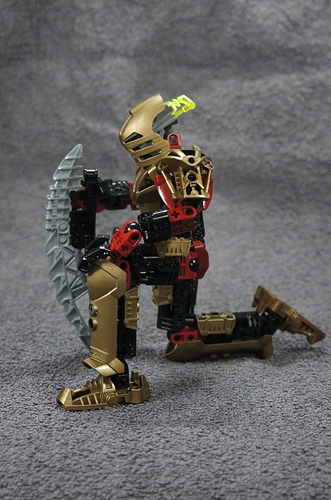 Lhikan has the usual 90° limb poseability I always strive for with custom limbs. As normal with my Toa builds, he’s also capable of standing on one hand when balanced out well enough. 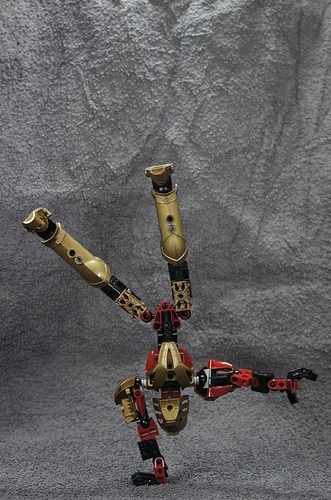 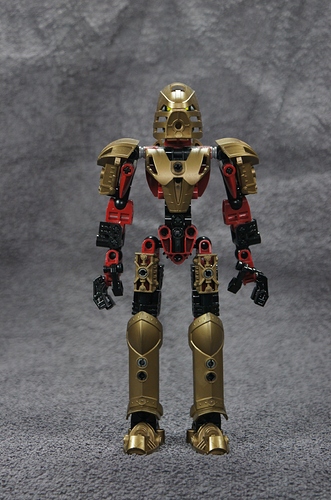 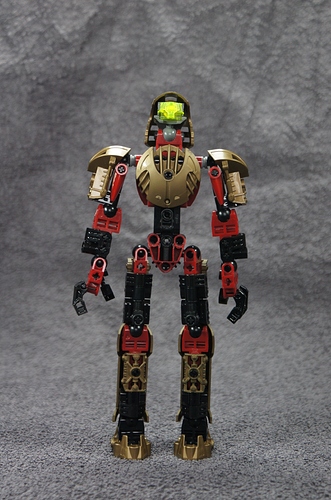 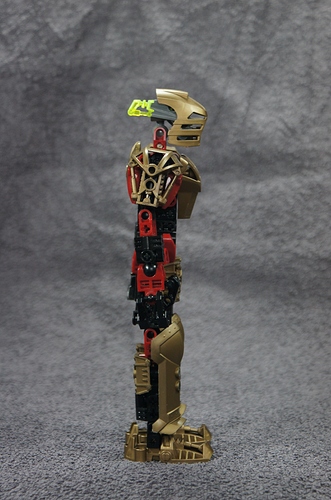 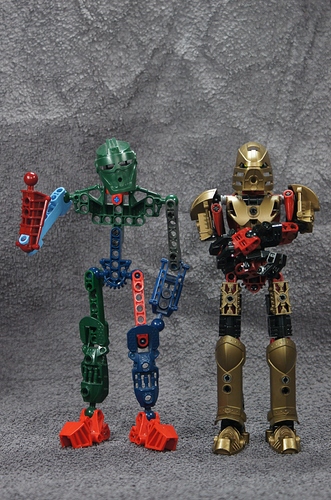 And here he his with my Tuyet and Nidhiki (whom I’ve now provided with an old custom cape - might provide him with an actual hooded cloak at some point). Probably gonna build a complete team of the Toa Mangai eventually. 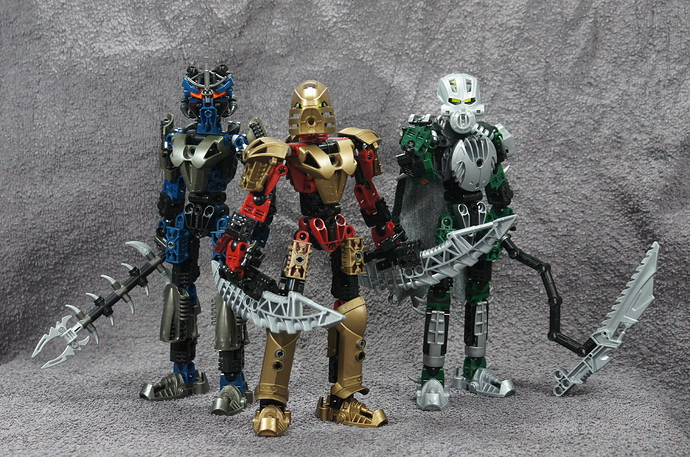 I’m not sure how I feel about the balance of colors here. Having gold shin armor makes gold feel like his primary color and red feel like the secondary, which is questionable for a Toa of Fire (not to mention that he doesn’t have a lot of red showing). Overall, though, the build is very nice, and feels faithful to the character.

Great work! I really like the shaping of the torso. The Nidhiki and Tuyet Moc’s also look great. I look forward to seeing the rest of the Mangai!

I feel like the black looks quite good. It makes the MOC resemble the original Lhikan more, and provides a nice level of contrast. It also somwhat resembles the black gambesons that some knights wore under their armour.

However, perhaps there could be a little less black in the legs.

he doesn’t have a lot of red showing

That’s true, though unfortunately based to quite some degree on the lack of small Technic pieces in dark red. Especially for the legs I’d have liked to use more red, but apart from the ankles (which aren’t red because of the lack of red in the legs from the front view - they wouldn’t have flown very well with the colour scheme) there is just no way to use more red in this build, and I did really want to use the Knights Kingdom armor as it works well with the Nuva chestplate.

Black has to be the colour of joice to some extent in pretty much anything custom - as black works with everything and most parts do come in black. Also keep in mind the Lhikan set also has black hands, ankles, a black neck and black hips.

I’m always a sucker for gold. I like it! Looks great

Overall I really like this. Although on second view it does appear to have a lack of red, It’s still instantly recognizable as Lhikan to me. Your stuff is really inspirational. Keep up the good work!

Also I wouldn’t worry about the swords. They look pretty fabulous to me, much more proportionate than the gigantic official piece.

The upper arms are really well built. The legs could use slightly more red, though based on your comments it seems that’s just the way it has to be. I have to admit, I love Lhikan’s swords so much that it’s a disappointment not to see them here. I don’t personally think the fingers enhance the hands, so you might consider taking those off and adding in the swords… but that’s likely just my preference talking. Good work overall.

This turned out extremely well! The general design appeals to me a lot, (Proportions are executed well.) I love how the golden armor actually looks like armor Lhikan wears, while the black and red color scheme flows perfectly under it. I also like how you made an improvised Lava board with the Bordakh blades. Overall, it’s a really nice revamp of Lhikan.

Epic. This looks amazing, you’ve got a great way of doing the custom Metru body’s, Lhikan definitely looks better with more black on him, keep up the great work

black works with everything

except for white sometimes

Great Job! They all look awesome!