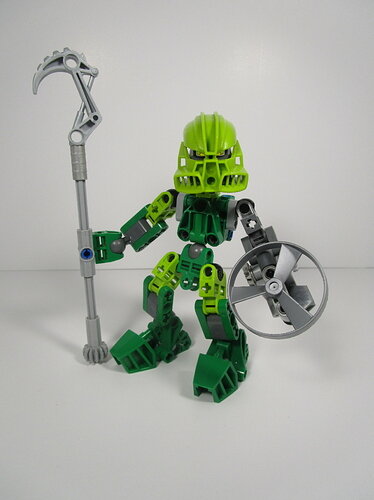 Name: Koda
Gender: Male
Titles: Turaga, Brother, Toa (formerly)
Species: Le-Matoran (Turaga)
Element: Air
Kanohi: Miru, Noble Mask of Levitation
Weapons: Badge of Office, Rhotuka Launcher
Home Island: Vaha Nui
Backstory: Koda was once a Le-Matoran musician from Vaha Nui, and was one of the survivors of the Vaha Nui Civil War. At some point after the war, Koda was abducted by an upper-class Steltian (a member a Sidorak’s species) to serve in Stelt’s navy. Koda, along with a band of his fellow captives, organized an escape which cost him his left arm. Shortly after the attempt, Koda and the other Matoran were rescued by the Makuta of Vaha Nui’s Toa Hagah team (or, at least, what was left of them after the Vaha Nui Civil War). At some point, Koda and five other Matoran (including a Fe-Matoran named Rino) were transformed into Toa. After a couple hundred years, this Toa team found themselves in the middle of a Dark Hunter siege, during which the team lost their Toa of Sonics. Seeing that his destiny was not to defeat the Dark Hunters, but instead to create the next generation of Toa that would bring peace to the island, Koda sacrificed his Toa power and became a Turaga. Soon after becoming a Turaga, Koda was chosen to become the Turaga of Vaha Nui… 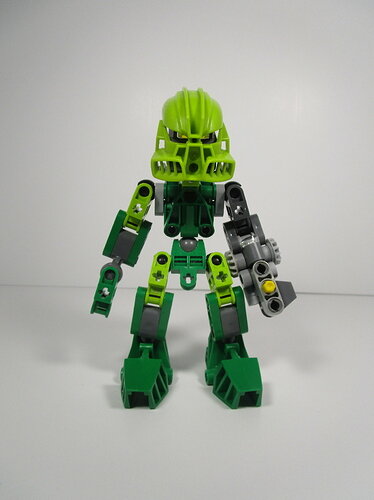 All right, here he is, in all his Turaga-y glory! I thought that it might be interesting for Koda to have a completely mechanical arm and I also ran out of green Technic pieces for that arm. 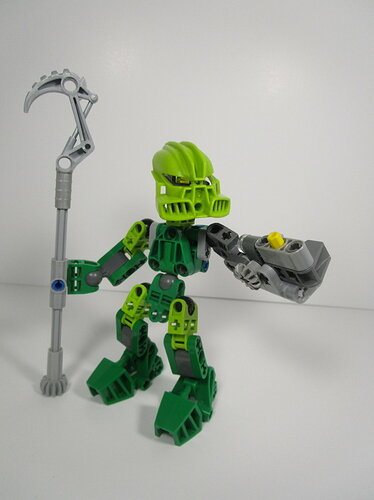 Here he is with his Badge of Office and built-in Rhotuka Launcher. Koda’s Rhotuka Spinners contain the fatigue power, which robs the target of all its stamina (similar to the weaken Kanoka disk). 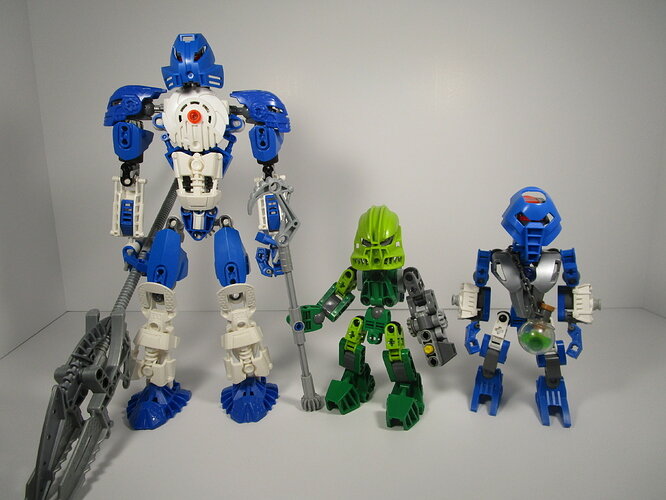 Here’s a size comparison with Voltstorm and Volah. Unfortunately, Koda is a little shorter than I would’ve liked.

EDIT: I forgot to mention this, but I just got a new backdrop for my pictures, and I think that it’s definitely an improvement over my last one.

Looks nice. Does he have elbow/knee articulating by chance? It doesn’t look like it to me but I thought I should ask.

Does he have elbow/knee articulating by chance?

Actually, yes, he does. I used some cut flex tube pieces in place of the 2-long Technic axles so he could bend his knees and elbows.

Wow, Bravo! Those look like black axles in the pics. Well done!

Simple, yet complex at the same time. Great Job! One of my favorite Turaga designs I have seen so far!

This design is very nice. The Rhotuka launcher looks sort of like a shield.

This looks nice! But the hand connector at the bottom looks like… wellllll… ya know… a pe… pe… possible joint!!! 8/10

I’ll try to change that in V2.