Vyrdran of the Brotherhood of Makuta 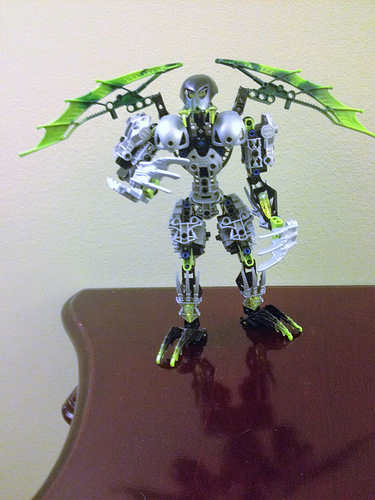 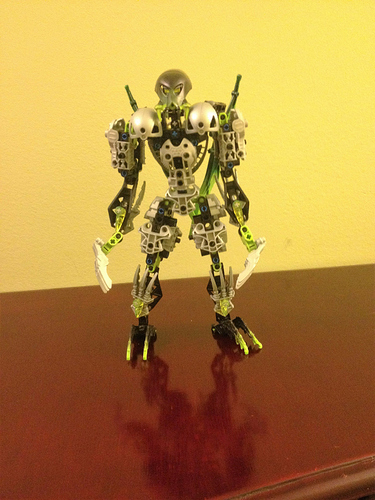 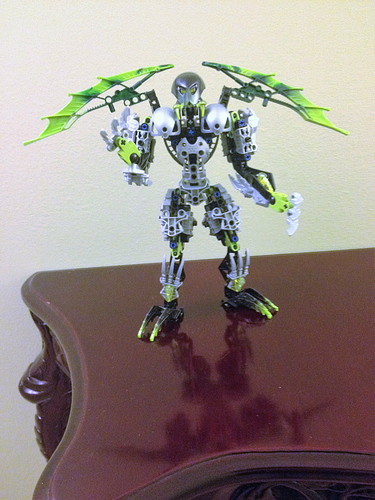 Makuta Vyrdran, like the other members of his species, was created from antidermis by the Great Spirit Mata Nui to serve as his peacekeepers inside the Matoran Universe. Soon after he was created, Makuta Miserix proclaimed Vyrdran the “chamberlain” of Destral, charging him with the upkeep of the fortress. Vyrdran was satisfied with this, until such a time when he was called to fight in the battle against the Barraki, where he was a lieutenant in the assault on Ehlek’s stronghold. After being given his first taste of battle, Vyrdran desired more. This desire would continue to fester until Teridax announced “The Plan.” When the time came, Vyrdran sided with Teridax, believing that maybe under his rule he would get to see some action. He was correct, as Teridax sent him immediately to the landmass native to the Skakdi to collect a powerful artifact, a weapon that could be used to absorb the elemental powers of Toa. After fighting off the natives of the island, Vyrdran found what he was looking for. Unfortunately for Vyrdran, the weapon had been charged with the elemental powers of the Skakdi that Spiriah had experimented on. When Vyrdran went to grab the object, his contact with the weapon caused it to overflow with energy, and it released several Nova blasts worth of power, destroying the chamber and killing Vyrdran instantly.

Makuta Vyrdran wore the kanohi imgae, the great mask of reflection. It’s power allows its user to see or emerge from any reflective surface within a 35 kio radius.
Aside from his mask power, Vyrdran had access to all 42 kraata powers, with near mastery of the power of electricity, as well as the element of shadow. He carried no weapon, as he was never really in combat, so he believed his claws and enhanced elemental connection were enough to deal with his opponents.

Some interesting design choices here, but not all of them work. My biggest issues are the placement of Nuva shoulders and the feet are a little off, but other than that an interesting MOC.

Overall the MOC is nice, the only things bothering me are the placement of the Nuva shoulder armor and the strange feet, as @Invader already pointed out.

That Nuva armor aside I quite like how you armored up the torso, though. The green eyes aren’t of course not bad, but ornage or red ones would work better in my opinion - adding some contrast.

The backstory unfortunately has three problems:

a) We already have a chief of security for Destral - Makuta Karthax. He was killed following the theft of the Avohkii because he didn’t stop the Toa.
You can make Vyrdran Karthax’s successor, though.

b) Vyrdran’s death as you described it brings two problems with it:

c) In general I would leave out any big confrontations with canon characters - in this case for example I deem it more likely that no one actually knew about the theft of the Avohkii until it was too late and the Toa had already escaped Destral. (Karthax actually saw them with the Avohkii, but since the Toa Hagah were serving Teridax he believed they were operating on Teridax’s orders.)

For a better fitting backstory maybe take this as a basis:

Otherwise if you have another idea of course I’ll help if any help is needed.

As to his powers… only two small nitpicks ;):

So overall Vyrdran needs a working backstory, then I’ll accept him.

Reminds me of the MOCs I’d make back in 2010/2011. Ah, this actually fills me with a lot of nostalgia. Don’t take that as a knock at all as this is still WAY better than what I would build back than. I really like the design. I used to look at mostly G1 system MOCs and scoff, but know I can appreciate they’re unique style.

Clever use of parts my friend, and a well built MOC. Good job.

This was not what I was expecting.
I like it.
Although the wings and feet could be changed this is pretty good
9/10

@Gilahu Oops. I’ll definitely change the mask power. Been awhile since I read G1 lore haha. Didnt realize the backstory was done before. Is it possible he could be killed by the discovery of the Avohkii in the first place, the denizens of Artakha killed him upon his arrival with Kojol?

Also, do you have any recommendations on what to replace the Nuva shoulders with? I personally like the feet but I can replace them with Gorast’s if it would suit the BoM more.

And thank you everyone else for your constructive criticism and kind words. It means a lot to me, and I definitely appreciate it.

Also, do you have any recommendations on what to replace the Nuva shoulders with?

Not right away… for that I know too little of the build. I would recommend experimenting around with different pieces or maybe removing that Inika torso you used completely and going for a full custom upper torso which might result in better options.

the feet but I can replace them with Gorast’s

That would probably help - at the moment the feet just don’t really fit with the rest of the MOC.

If you want Vyrdran to have something to do with the Avohkii I fear there really only is one way - the one I mentioned above, him searching for the Rahaga and the Mask of Light after they stole it from the Brotherhood.

Try filling in the gaps. It has potential.

It’s not a huge issue for me story-wise. I was just thinking of things I could do without having to rewrite the whole thing because I’m lazy. I’ll tool around with your suggestions, and hopefully I’ll have another backstory posted by tomorrow. Thanks so much for the feedback.

As to the backstory…

This doesn’t sound like Teridax - more likely Teridax would tell Vyrdran exactly how the thing looks, but don’t tell him what it does.

Realizing too late that Teridax had set him up, the device detonated, killing Vyrdran instantly.

I would change this into an actual accident - there’s no reason for Teridax to dispose of Vyrdran this way. Maybe Vyrdran simply decided to find out why Teridax wanted this artifact so much and started… experimenting?

Unfortunately, the mask could only be used once every hour.

Edited it again, how does it look now?

Now the backstory works, although I would change the nature of this weapon slightly for Vyrdran’s “Book of the Botherhood” entry if it’s ok for you:

That weapon nullifies Elemental Powers by absorbing them. The Skakdi, however, also possess elemental powers due to Spiriah’s experiments. Over millennia this weapon thus absorbed a LOT of elemental energy - so much that it instantly realeased something resembling a Nova Blast the moment Vyrdran touched it and thus brougt it out of “balance”.

MOC accepted. Thanks for participating!

@Gilahu Thank you for letting me be a part of it! I very much enjoyed the process!

I’ll definitely edit the story to what you specified. But please forgive me for my ignorance, I’m not entirely sure what The Book of The Brotherhood is?

Also, I really don’t want to press the issue, as I’m very grateful to have a part in this awesome project, but is that female Makuta still available? If so, I’d love to do it.

its interesting, but i think would look better without the nuva plates, do you have a side shot?