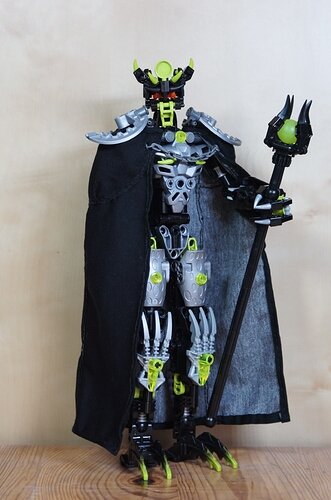 Backstory:
As the High Chamberlain of the Brotherhood, Vyrdran held one of the most important and influential positions in this organization for over 90,000 years. He was the Left Hand of first Miserix and later Teridax, and his word held as much weight on Destral as that of the Brotherhood’s leader.

It was Vyrdran’s organizational talent that originally made Miserix elevate him to the post of High Chamberlain - a position most other Makuta were either unwilling or unqualified to occupy. Through his cunning, his political and economical talent and his utter indifference concerning wat he had to do to reach his goals, Vyrdran quickly turned this simple administrative post one of the most important positions in the Brotherhood’s hierarchy. Before long he was the undisputed inofficial ruler of Destral, while Miserix and later Teridax - who were nominally Destral’s rulers - focused on politics and external matters, leaving internal decisions mostly up to Vyrdran. It is said that even Teridax always listened intently to Vyrdran’s advise in certain matters.

While Vyrdran was a loyal member of the Brotherhood of Makuta and owed much to Msierix, this didn’t stop him from supporting Teridax at the Convocation. Vyrdran dreamed of making Destral the political and economical center of the universe - with him right at the heart of it, as single word from him enough to command thousands to do his bidding.

His central position on Destral made Vyrdran detest leaving the island for longer than necessary. He always assumed that without his firm hand one of his idiot brethren would make his organizational apparatus collapse and destroy his life’s work. Still he complied when Teridax sent him to retrieve an artifact from Zakaz which Spiriah supposedly left there. Eager to get back to Destral and as usual having others get their hands dirty for him, Vyrdran commanded one of his Toa Hagah to carry the artifact after they found it - if it was the Toa’s fault, or if Vyrdran simply wasn’t careful enough isn’t known, but Vyrdran and the two Toa Hagah that accompanied him were obliterated in an elemental explosion triggered by the artifact an instant later.
Vyrdran’s greatest fear never came to pass, however. When Tridax was elevated to the post of High Chamberlain, he made sure that everything continued on as Vyrdran had established it.

Personality:
Strict and unforgiving, Vyrdran was a very demanding superior, and his impatience with fools was legendary. Lazy workers or servants who made mistakes he often had punished severely and anyone actively sabotaging his organistaional appartus could be happy if he died before Vyrdran had enough and transferred him to the dungeons for further treatment. Even other Makuta treaded carefully around Vyrdran, for while he couldn’t directly do anything to them, a few words from Vyrdran in Miserix’s or Teridax’s ears could well earn them a few centuries doing chores in the outermost regions of the universe, or, if Vyrdran felt like it, a sudden severe shortage in lab materials.
What made things even worse was the fact that everyone knew it had been Vyrdran who had fitted statues and other ornaments all throughout the Destral fortress with gemstones or other reflective surfaces, and that he frequently used his Kanohi to see what was going on elsewhere. Often enough an unfortunate servant had thought a mistake might have gone by unnoticed, only to find themselves being called to the High Chamberlain’s office minutes later.

Equipment:
Vyrdran wore the Kanohi Arthraku, Great Mask of Scrying. With it he could use any reflective surface to see from any other such surface in a wide radius.
He usually didn’t carry any tools, relying on his powers if necessary. 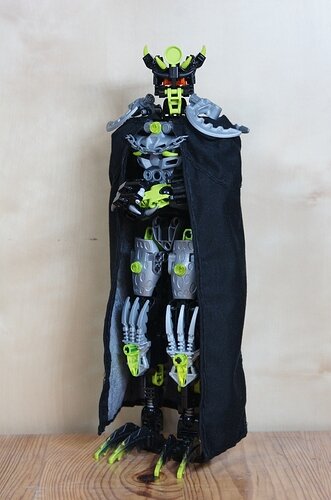 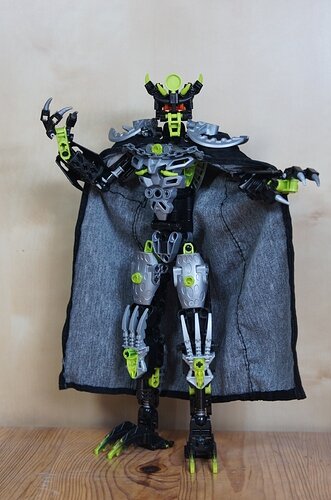 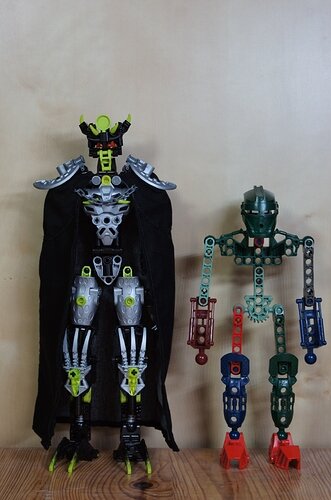 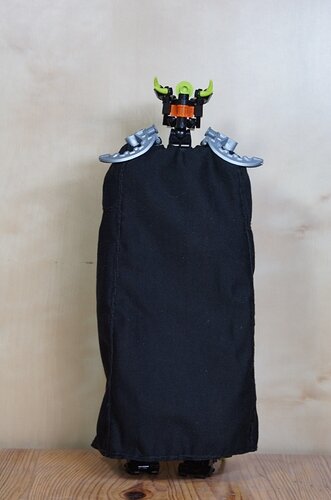 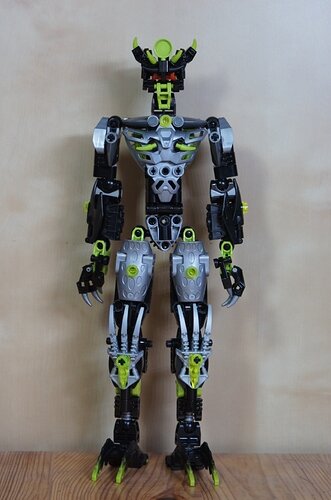 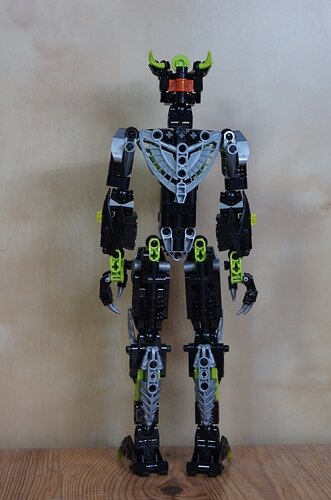 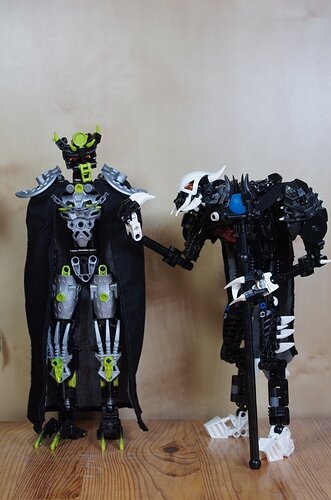 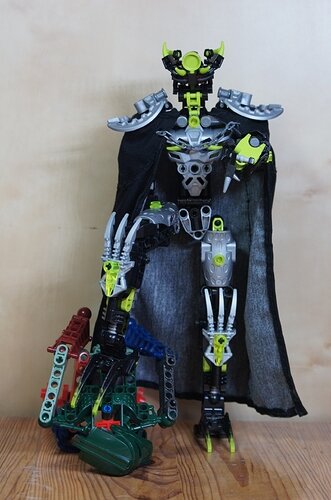 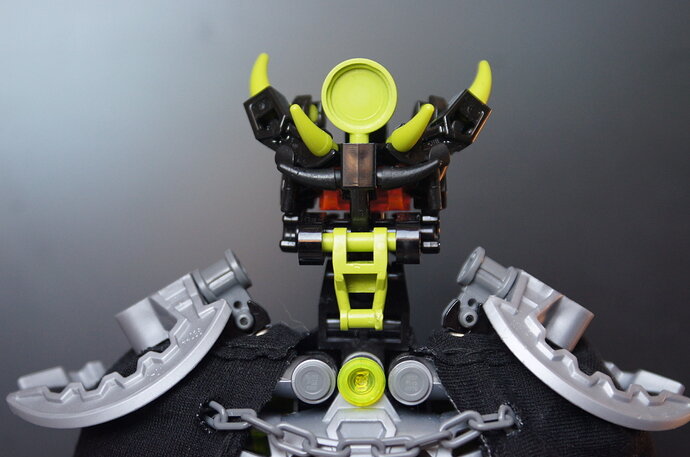 Finally finished that cape! And it even turned out pretty decent finally - although still not perfect. I should really keep capes simpler in the future…
So, what’s there to say - the MOC was mostly finished last August (I think?) - it took so long to come up with a custom head design and a cape, though. Overall pretty pleased with everything, although without the cape Vyrdran looks a little plain - but then he’s supposed to go with the cape and his frame needs to be adapted to it.
But anyway, that’s revamp number 14 done!

Looks fantastic! I love the cape.

That head is fantastic, well done!

That lime green droid torso feels weirdly long, or standoutish. Maybe use a black colored one?

The mask looks magnificent for a brick-built one. The cape is nice too.

Quite regal. The face in this version is improved.