While the discussion topic has been closed, I would like to throw in my two cents into the matter of weapons for the Toa Hagah canon depictions. Specifically speaking on the topic of spears, they need to be spears.

I should clarify this point. It is clear through Bionicle’s run that some weapons have gone by names unfitting to real-world depictions of those objects. As mentioned in this line from the ruleset feedback topic:

We make no restrictions on spear-tip usage. Plenty of things in BIONICLE have gone by names other than what they actually are. Norik’s spear tip, for instance, is an aqua- axe. As such, I say go open season with that.

However, I must interject with one question- how does a weapon function? While Bionicle weapons are factually misnamed, ultimately they function in a similar manor.

Now, I may not be a weapon expert of much any kind, but to me a spear is a longer staff weapon with a tipped end to be used for jabbing and piercing things at a distance. Take the example of Norik’s spear. While the piece is called an axe, as it has somewhat of a tipped end to it, it can function as a spear tip. In the same way, I know of many other existing pieces that can fit this motif, such as Kopaka Mata’s Ice Sword. My point in summary, any object that doesn’t have reach and can’t be used for a jabbing, piercing attack should not qualify as a spear.

However, I will not argue against other weapons being used (to an extent) in the individual contests. Overall, disregarding the restrictions of what could be considered a spear/spear head can lead to a great amount of creative diversity, which I whole-heartedly encourage. What I enclose in this topic is rather one suggestion: let the final art designers fix the Hagah’s staffs to fit the motif of a spear.

For example, here are two Seismic Spear designs I have seen. 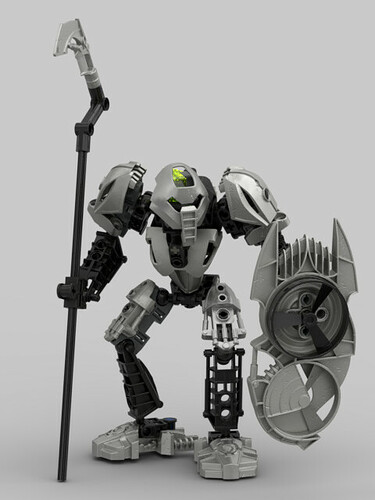 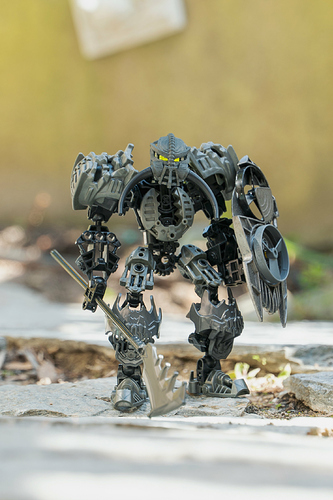 The silver Bomonga has a sharp hook weapon while the gunmetal one has a sword on a stick. So, should they be discounted? No, absolutely not. Through small modifications, art can keep the overall style of the brick-built weapons while making them fit a spear-like functionality.

Here are a couple of quick sketches I made based on these. Keep in mind; I’m no artist, so these are purely representative of what could be an even more beautiful interpretation for the Seismic Spear. 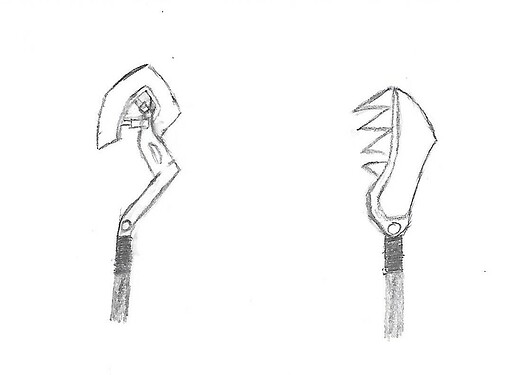 Seismic Spear Sketch1089×793 51.5 KB
By ensuring these are balanced and have a tipped end, these sketched weapons can act like a spear while maintaining the overall structure of the brick-built templates.

All this being said, when it comes to staff weapons which are large on horizontal striking, such as pickaxes and scythes, I don’t know if there would be a way of fixing them without changing the base frame to a great degree. As I could see a lot of backlash coming from art changing weapon designs in such a prominent manner, I would recommend that these types of weapons shouldn’t be allowed for the individual rounds.

I hope that my fellow Bionicle community members can see my argument and come to agree with me. This is a largely important matter that I honestly don’t think I would be able to overlook. But, whatever happens during these contests, we should all try to come to accept the results as canon. Thank you for reading my rant about spears in Bionicle, and good luck to all competition entrants. I look forward to seeing what excellent creations come from all this.

I see your point, and it does make sense. I just have one critique, and that is one of the spear tips you mentioned, specifically the gunmetal one. My problem with it is that, to me, your redesign looks almost exactly the same. I done see the problem with it. Also, I have one question, do you consider glaives acceptable?

I did foresee the question about my change to the gunmetal spear. The original uses a piece that is very unbalanced. That’s why I particularly mentioned “balanced” as an issue, because spears can become uncomfortable to hold if they are not so. To change this, I centered the support spine through the blade and elongated the spikes a little, so as to give it this more balanced feel.

To the point of glaives being considered spears, again we have the ambiguity of Bionicle’s use of names to thank for this. While glaives are their own defined weapon in real life, by Bionicle’s standards it can act like a spear and would likely pass a spear-qualification test.

I already asked about this, and Meso responded:

Good question. We discussed it internally, and we think inverted torsos like that would be perfectly acceptable. The intention behind the wording was more to avoid people trying to incorporate the two individual parts in ways that don’t connect them how LEGO intended. So long as the lower torso is connected to the upper torso in the same way LEGO did, we don’t care how you orient it. Nothing. For me, I make no meaningful distinction between shoulders, bicep, upper-arm, etc. That area of coverage is what’s important, not necessarily the attachment point. They are considered metallic, so they would be allowed. We intend to start in April, if not sooner. Could start as early as the end of this month, depending on how this feedback process goes. We make no restrictions on spear-tip …

It can be any type of polearm as long as it looks like it fits the “sniff test” for what the Hagah have.

I’d like to give some clarification on my “spear” design (for anyone who does not know, I am the builder of “Silver” Boomonga, also known as Old Man Boomonga).

Firstly I do want to add a disclaimer that the complete intention of my MOC was simply to test a Strakk-styled torso build using the Metru limitations. As it was a test (and also considering the official rules bar it from entry on a number of points) it was never intended to be a legitimate entry, more of a proof of concept/case study. And secondly as such, nothing aside from the actual torso construction had much thought put into it and are mostly meant to be ignored.

I even wholesale stole someone else’s shoulder armor design because I thought it looked cool.

That being said, I do think this particular discussion has merit, and I think my “spear” design is a good edge case when discussing it.

My thoughts on my spear design are as follows:
As I stated before, the weapon on my MOC was an afterthought, so I took many creative liberties I did not think would apply to an actual contest entry. While building it, I interpreted it completely as a scythe sort of weapon. I also just really like weapons with interesting angles and shapes.

However, Bionicle weapons do have a habit of being named incorrectly or simply being called by the name of a similar-enough weapon. Helryx, for instance, canonically carries a mace, but the canon design actually carries a morning star, essentially the same weapon, just with spikes on it.

Staves, spears, or other such polearms typically seem to just be generally called “spears” in Bionicle (I think Meso even pointed this out one time), and so the difference between what a Bionicle weapon is and what it’s called (at least to some) is negligible.

I, personally, don’t take the name “spear” for the weapons of the Hagah to discount other kinds of polearms like scythes or halberds. I think, generally, the name “spear” in Bionicle could adequately be applied to any sort of piercing or slashing weapon on the end of a pole.

In that manner, in my eyes, anything with a blade on the end of it should qualify as it is. A bludgeoning weapon like a mace or a flail would not.

So I personally see no reason why my “spear”/scythe design should be altered or disqualified if anyone else were to use something similar.

It think the looseness in terminology for Bionicle weapons lines up with them being used primarily as conduits for elemental energy and for crude melee. Most Toa do not seem versed in any kind of intricate weapon-to-weapon fighting, so they don’t carry weapons designed or distinguished between for that purpose.

I do want to see Gali Nuva cut down a tree though.

As much as I appreciate the ambition, I am going to close this down. We’d prefer to contain these discussions to topics we’re paying close attention to, during a time frame that we’re able to address things as quickly as we can.

Additionally, all of these topics splits the focus and attention between them, and makes it hard to have centralized conversations. Moving forward, we’re going to be heavily restricting the creation of contest topics not made by us.

We hope this is understandable and makes sense. We’ll be back as soon as we can.