Good afternoon friends. I, the great and glorious co-founder of iBZP have been roused from my long slumber to share my entry for this contest. I’ve always loved the character of Artakha for the longest time, and am so excited to finally have a contest to give him and his legendary mask a look to match his imposing and legendary status. I’ve been building this on and off since the canonization contests were ratified and I’m happy to share my final look. 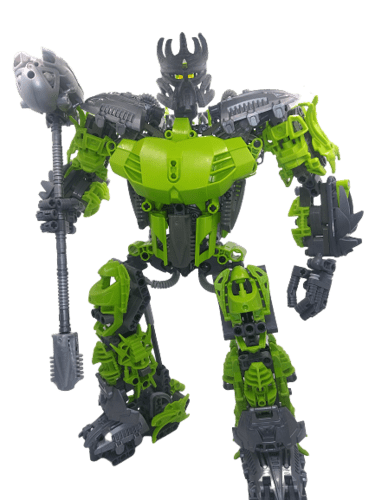 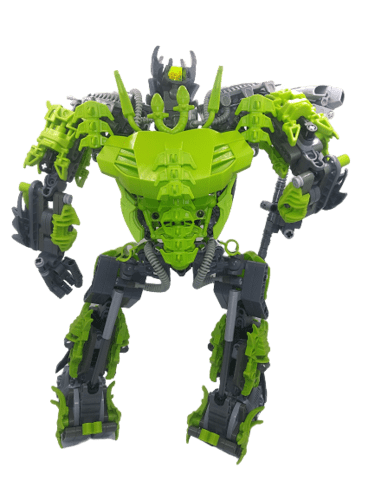 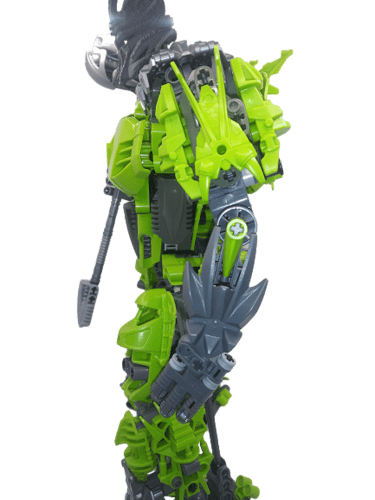 I really wanted to design him as imposing and large as I could, and keeping the G1 aesthetic at the same time. Here is a size comparison to him and some of his creations (The Toa Mata): 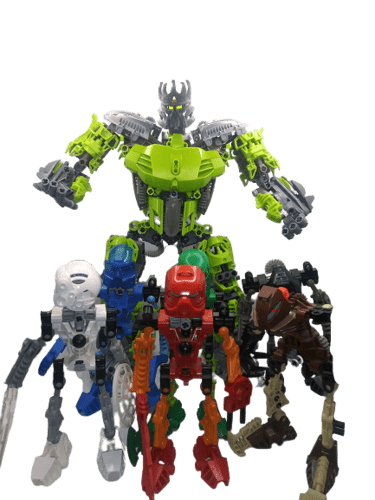 And another shot of him next to Tahu and Mctoran Takua, for scale. Pretty much towers over a standard Toa (~6-7 ft tall in canon) 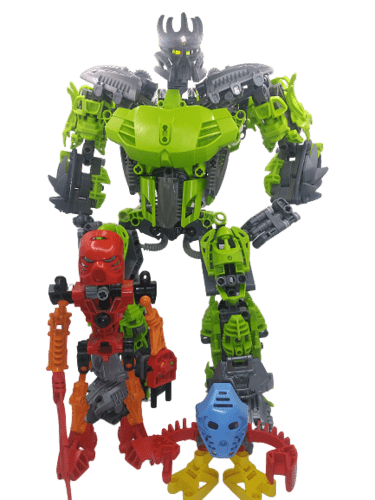 Reading back through, its kinda hilarious how many critical items to the Matoran Universe Artakha and his workers made. Including the Kraakhan and the Avohkii: 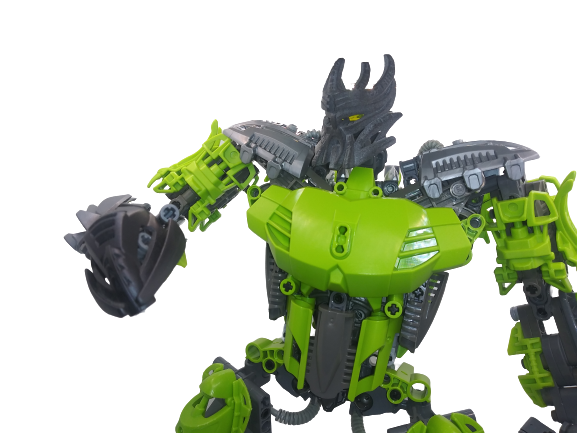 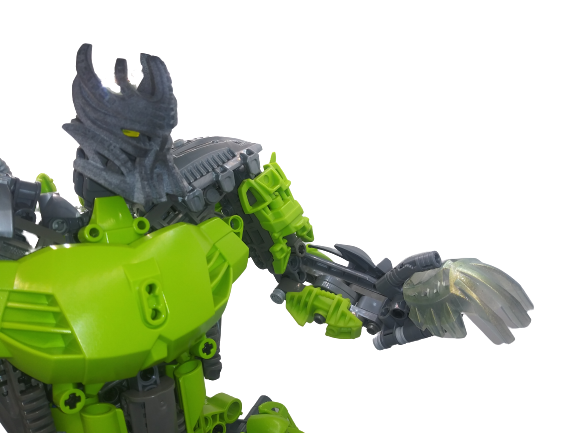 Speaking of creation, as the wielder of one of the three legendary masks, I wanted to make sure to pick a 3D Modeled mask that fit the description and gave him both a sense of menace and regality. To that end I used KhingK’s Mask of Creation (Shapeways Link: https://www.shapeways.com/product/YMZAR7FNU/the-legendary-mask-of-creation?optionId=154647400&li=shops). Really liked how it complemented this figure, and its a really solid mask! This was the only 3D printed peice utilized for this MOC.

Artakha is a physically imposing figure, standing at roughly ten feet tall, and clad in grayish green armor that is decorated in ancient symbols.

I took liberties with the colors. I wanted to make him a G1 MOC and have been building him for a hot minute now. Unfortunately there aren’t alot of sand-green pieces in the G1 system, and I’m not familar with these fancy new 3D modeling things you kids use these day. I tried to make sure green was as predominant a color though, due to lack of descriptors. If there are any issues with the color ratio please let me know and I can add some more! I tried to pick pieces with “ridges” and “bumps” to try and simulate the "ancient symbols.

He also had a hammer: 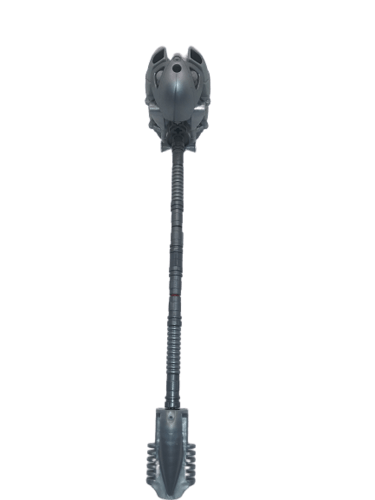 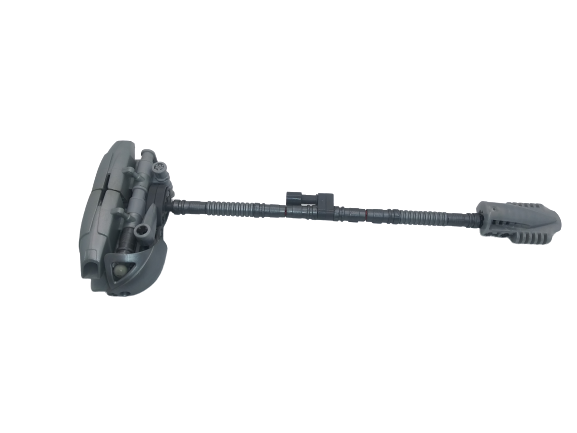 Happy with how this came out. And happy I finally found a way to make the articulated “Toa” Mata Nui set hands work on a moc and not look weird XD: 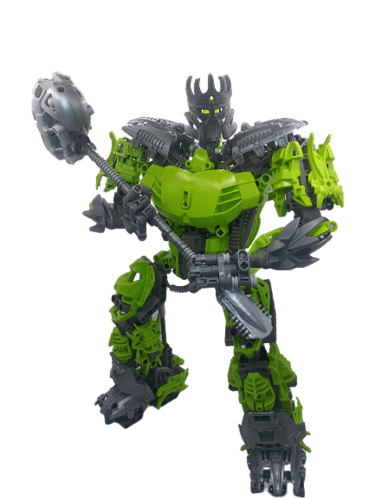 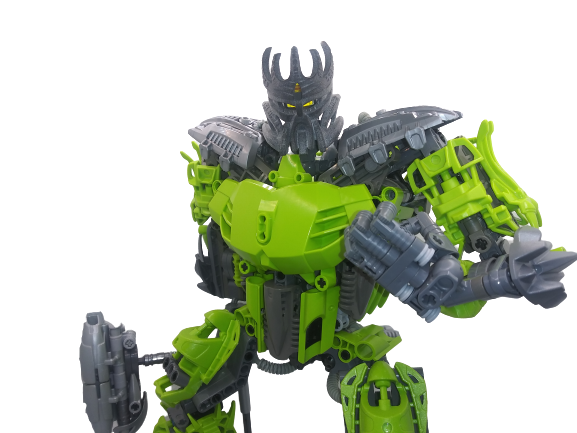 Overall, I’m really happy with this MOC. He’s such a great and important character and having this contest happen is a dream I never thought I’d see come true! I’ve linked my flickr for the remaining posts. For the contest moderators, the gallery includes my unarmored figure, individual armor picture, and skeleton. Please let me know if anything else is needed for entry.
Flickr

Lastly, I’d like to make a general statement. While I haven’t been vocally active in the community in some time, I have been watching and paying attention. I was beyond ecstatic when I saw that canon contests were back after almost a decade. Unfortunately, it was disappointing to see how many issues arose during the Helyrx contest, and how easy it was to get sucked up into the negativity (I myself did too

). To that end, I just wanted to implore everyone to enjoy these contests and have them be a fun and exciting celebration of a line that means so much in so many ways to all of us. This is a great, frankly miraculous, opportunity to really celebrate bionicle and give life to characters who only existed in our imaginations before. Best of luck to all entrants, and here’s to a great contest! 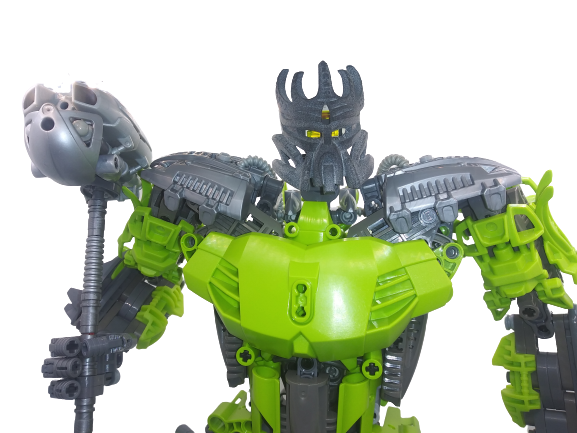 when you try to critique a celebrity’s build

This Artakha is a chonky lad and I’m all for it.

Sol my guy, this is glorious. You did an amazing job with this build, and I really like that mask design too

. Any critques and comments are greatly appreciated! I haven’t made a serious moc in a while and any feedback is nice! (Here’s my original Artakha I made when I was like, 13 - he sucked

I like it. It’s definitely the most unique interpretation I’ve seen. I’m worried that the breakdown photos don’t describe the build enough to replicate

If needed, I can break it down more and take more pics. Just lmk @Mesonak @Eljay.

Aye, if you could provide some more, then you’ll be all set.

Will do. Will upload shortly!

Also, it needs a link to a free download to the mask.

It’s the best one so far!

as of me posting this, its the only one so far.

@Komrad it is you

Masterfully built! I love how dark the mask is, it really adds to how imposing he is!

What i like the most about it it’s his constistence, and he manages to be imposing without being over-complex.

The most vibrant artahka I’ve seen, and in a good way because i love this. I wish you the best in the contest