It’s time for yet another drawing! This is my take on Lewa (not Eljay) Nuva in his adaptive armour form: 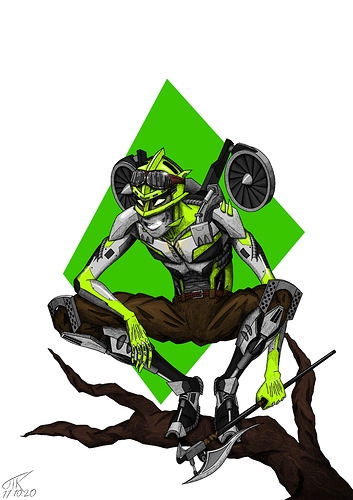 I have chosen to draw the reckless Toa of Air after Tahu for two reasons:

As you can see, quite many things have been changed:
Lewa has an axe instead of a sword, because it is more fitting to him in my opinion;
I have changed the way his flight equipment works. I’ve tried to make the jetpack look sleeker and more manoeuvrable;
And finally, there is a new design for Lewa’s adaptive Miru Nuva. The original ones (both from the canister set and Axalara) had been amazing, but neither one of them resembled Lewa’s previous masks. Mine is based on @Galva_Nize’s adaptive Miru, which you can find here. It has some added details and removed mouthplate.

I have tried to show Lewa’s lighthearted and witty personality in his pose and facial expression. And yes, he does have a face. I have always imagined most beings in MU to have actual faces under their masks, so bear with me.

I am open to suggestions on what Bionicle characters I should draw in the future (these must be the characters who have already got canon appearances), I will add them to my to-draw list and try to draw as soon as possible

Thanks for viewing, tell me what you think!

Well, since you’re open to suggestions, might I recommend drawing Vezon?

Oh my gosh
I love it

Maybe you could do some of the Piraka soon? I think they would look very good in this style.

idk man looks a lot like eljay, just look at the soulless eyes and the fashion sense

Well, Vezon is my favourite Bionicle character, so I’ve considered to draw him anyways. I’ll add him to my to-draw list.

some of the Piraka

I can do that for sure

Since they all have pretty similar designs, I think I could draw three of them in one drawing and then the other three in another. Added to the list!

Thanks, glad you like it, there’s more to come soon!