Guess what?! Bionicle Redrawn is back!

I don’t think that anyone still remembers about this series at the first place, so you’re probably not wondering why it has been absent for so long, but I’m going to explain what happened anyways.

This happened. I was invited to draw some stuff for a Lego Worldbuilder project, so I had to take a break from Bionicle Redrawn. A small, week-long break would be enough, I thought.
Spoiler: I was wrong…

So, here I am, seven months later than promised, presenting to you my newest drawing: Toa Helryx! 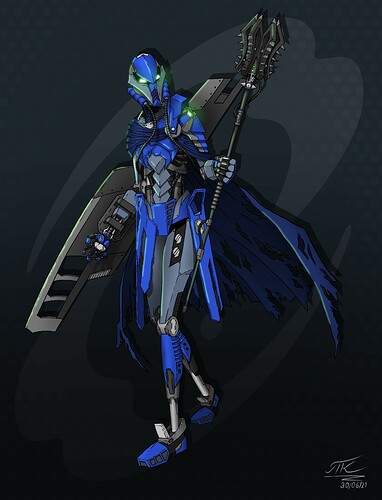 I said that this is my “newest drawing”,right? Well, I lied.
I started drawing this seven month ago and haven’t finished it up until now because I am too much of a procrastinator to work on two different art projects at once

It was originally supposed to be a stylistic reimagining of Helryx’s official appearance, but I got carried away (as I usually do) and departed from that look a bit too much. Honestly, I’m not a big fan of the official Helryx MOC, so I left very little of it in my artwork, designing most details from scratch and sometimes taking inspiration from some other Helryx MOCs. I also had to change her mask, one of the few things that I like about Helryx’s canonical look because its aesthetic was too different from what I was going for. 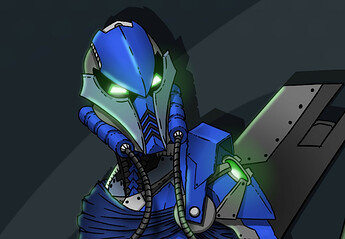 I also gave her a cape because I think it would make sense if the leader of the Order of Mata Nui wore one, but mostly because capes are the coolest thing ever.

This drawing is a part of my project called “Bionicle Redrawn”.
my goal with this project is to improve the designs of all the significant characters (who have canon appearances) from Bionicle story.

These are the characters that I’ve already drawn (links to the original posts included):

This is the list of characters I’ve got plans to draw in the future (it’ll be expanded every now and then):

I will be uploading these on this site weekly-ish.

I am open to suggestions on what Bionicle characters I should draw in the future (these must be the characters who have already got canon appearances ), I will add them to my to-draw list and try to draw as soon as possible.

That’s it for now, tell me what you think!

I like how you made the shield and the legs.

What have you done

So no one of consequence then /s

Something about the right hand is strange… Don’t know what it is. Looks a bit weaker than the left, perhaps? Regardless, I love this more mechanical style than the organic-esqe one of your other redraws. Feels way more Bionicle and I dig it.

Also, I’m officially requesting Sentrakh for a redraw. Can’t wait to see the rest you’ve got!

Man, I feel like have you entered the Toa Helryx canon contest, this would have had a fair chance at winning!
Excellet artwork, looks like something worthy of appearing on BS01.