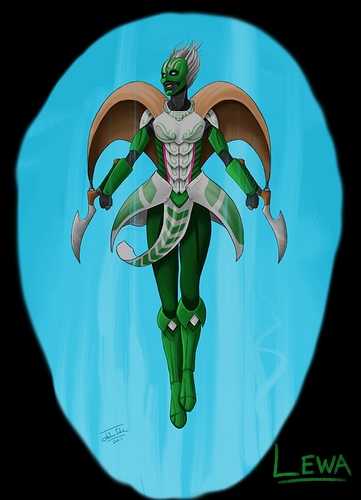 Here’s Lewa. She was the first one I drew out of the six, so her armor is the closest to the official designs. Nevertheless, I thought it would be a cool idea to turn her cape into a wingsuit. I’m not sure what her weapons are called, so I’m just gonna call them axes. Anyway, the idea is that the handles of the axes can clip onto Lewa’s gauntlets and fasteners on the cape clip into rings on the axes, giving her a little extra length to the wingspan. I also added hair to her as well, this time being a more feathery hairstyle to fit her element. 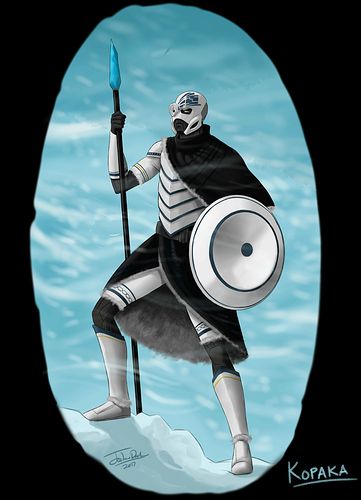 Here’s Kopaka, my favorite of the six. He was the only G1 Toa I got, because I didn’t have a lot of money at the time and I really liked the element of ice. Anyway, I kept the cloak, and gave him some leg coverings as well. And fur, lots of fur lining. I went a little simpler with his armor, giving him a simple layered armor as opposed to the more intricate armor of the official designs. As for the spear of sword debate, why not both? I didn’t draw his sword here, but why not use the spear as a throwing weapon and then have the sword as a secondary? 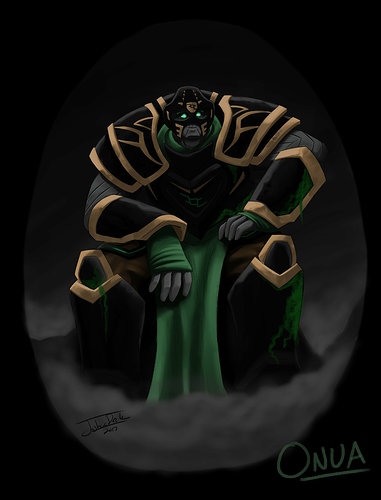 And finally, Onua. I tried to fit him within the standard dimensions that I used for the other Toa, but he was so bulky that I had to draw him sitting down. And then I ended up increasing the dimensions anyway. This is also one of my favorite ones. I really like the color scheme; the brown and sand green kind of remind me of the draugr and ancient nord armor from Skyrim.

And that’s all six. Thanks to TTV, for getting me into Bionicle.

Like Gali, not a fan of the hair Lewa. I feel like the design is saved, however, due to sticking mostly with the original design. This seriously looks fantastic. Weapons are cool too.

Love the fur and armor on Kopaka. His shield looking smooth and metal is also a nice touch. Needs more of the patterns from his face to go across his body though.

I have no complaints about Onua. That’s one good drawing you have there.

I don’t really like Lewa, Kopaka looks okay, but Onua is amazing.

I’m not a fan of the Lewa drawing much, but I still like it. Specifically, I don’t like the hair design and the cape just seems too small, imo.

Kopaka, on the other hand, looks great. I love the fur detailing on the inside of his cloak, it just fits so well. My only nitpick with Kopaka is the shield, but I assume that’s just how G3 Kopaka’s shield looks.

Onua is a masterpiece, I have no nitpicks or anything. Seriously, that Onua is probably one of, if not, the best Onua G3 art I have seen.

I really like the way you captured Onua and Kopakas characters. Their expressions suit them perfectly and the unique styling of their armorment tells a lot about their respective villages. I also enjoy the fact that Lewa’s weapons and wing suit can be fastened into one another.

Not a big fan of Lewa’s hair, but I really love Onua.

I myself, am not a fan of the fur, think about it, Would the guy with mastery over ICE and the cold, really need an extra layer to keep warm?

Purely aesthetics. The underside of his robes looked boring without it.

While these are all good, Onua is easily my favorite of all six.

Onua like this is positively perfect.
His pose, the draping of his robe, the mist adding an air of mystery where he sits… easily my favorite.

Onua is pretty coolio too.

Oh my gosh it totally does…

I have a request/idea for Ninjago artwork. Could you do a wallpaper piece similar to the ‘Ultimate Ninjago Poster’ or just based off of one season? Preferable with the Ninja being hooded

Thank you very much,
Shawn

@joshuad17 I did a drawing based on your design of Onua here. What do you think? Disclaimer: I’m not an artist.

I have a request/idea for Ninjago artwork. Could you do a wallpaper piece similar to the ‘Ultimate Ninjago Poster’ or just based off of one season? Preferable with the Ninja being hooded

Thank you very much,
Shawn

Do you mean like a desktop wallpaper? Maybe, though I don’t really take requests, so I’ll prioritize other things over it. I’m working on a worldbuilding project that combines all nonlicensed system themes into one universe, and as a result I’m doing less Ninjago stuff lately in favor of other Lego themes, like Ultra Agents/ Agents, Space Police, Blacktron, Monster Fighters, etc. Though I’ll keep it in mind.