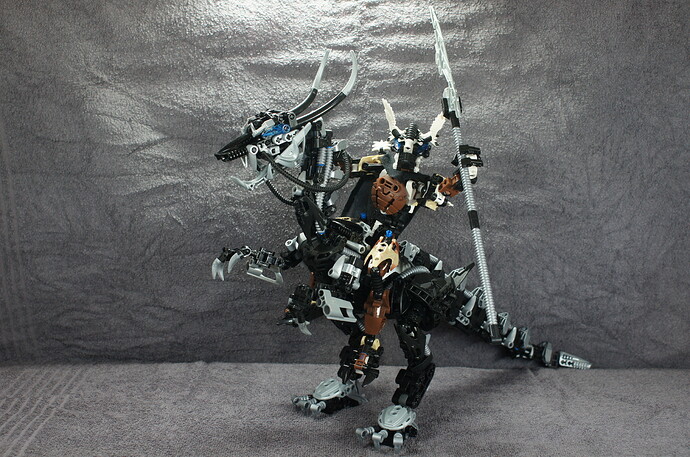 Asonara, the region in the Southern Continent’s center, is dominated by vast grasslands and deserts. In this barren wilderness, Bomohku (Lariska’s species) clans eke out a living by traveling from waterhole to waterhole with their herds of herbivorous Avohi Raptors and living from what little the land offers.

It is thus no surprise that the Bomohku seek to improve their lives by taking what they want from other lands - predominantly the western regions of the Southern Continent.

While the Bomohku are commonly only lightly armored, their speed and agility as well as their skills with various weaponry and in handling their mounts are superb, and their raids are feared accordingly. With the large Matoran population in the affected regions, the Bomohku have become particularly skilled at fighting Toa, while the heavy Augafi (Mantax’s species) infantry more common in the south fares a little better against them.
As a response, the Toa and other locals started to learn from the Bomohku, however, also taming the Avohi Raptors to be able to meet the raiders cavalry against cavalry.

Avohi Raptor:
Large herbivores which despite their fearsome appearance are generally placid, but if angered - or trained - can pose a serious threat due to their powerful jaws, sharp claws and pure weight. They normally live in herds, and an Avohi Raptor stampede is near unstoppable. They are common in the regions of Avohi and in northern Asonara, and have been tamed in both places. While in Avohi they predominantly serve as mounts or as pack Rahi, the Bomohku also live from their energy, though care is taken to never draw too much from an individual.
The natural colours of Avohi Raptors are black and silver, but particularly the Bomohku like to decorate their favored mounts, as they are of central importance to any warrior in their culture. 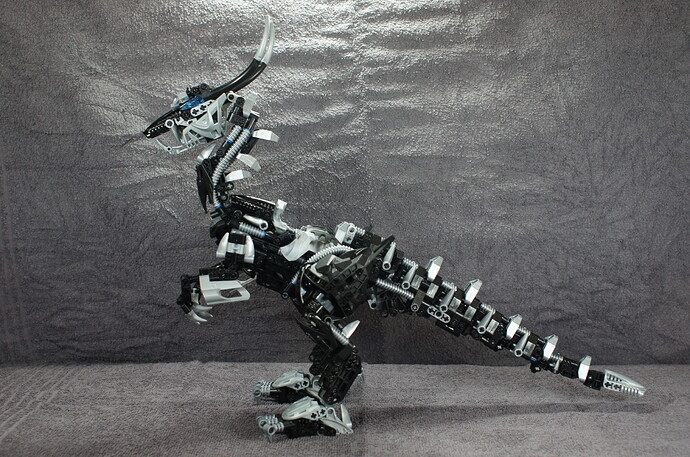 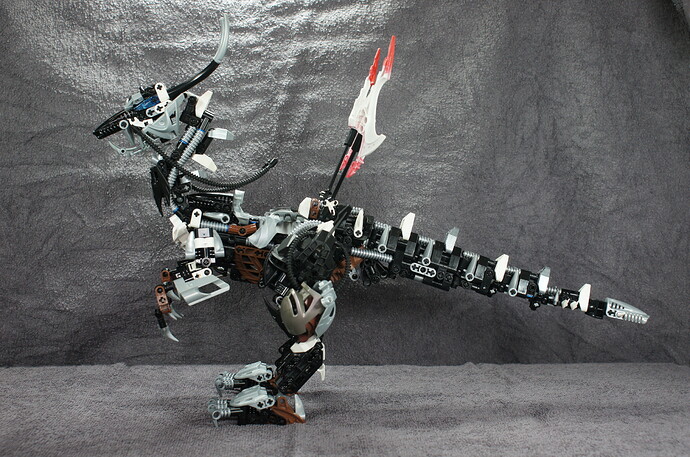 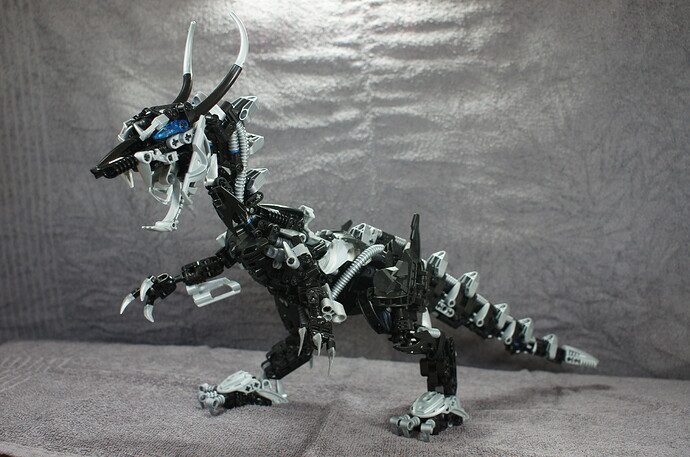 Desert Bomohku:
The desert Bomohku are proud warriors, though not as stealthy or acrobatic as their jungle brethren in the east of the continent. Due to them frequently facing Toa, most of their weapons include hooks and spikes to unmask an opponent. Such masks are often collected as trophies, and occasionally also used - though damaged masks bring particular prestige for a warrior, as it means they faced a worthy foe that wasn’t overwhelmed easily. 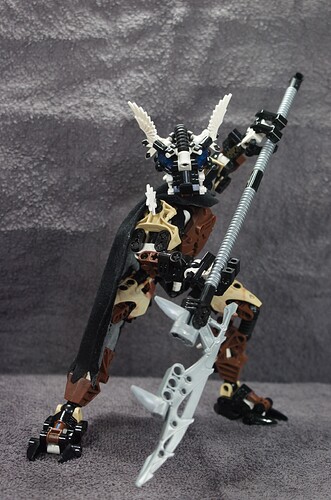 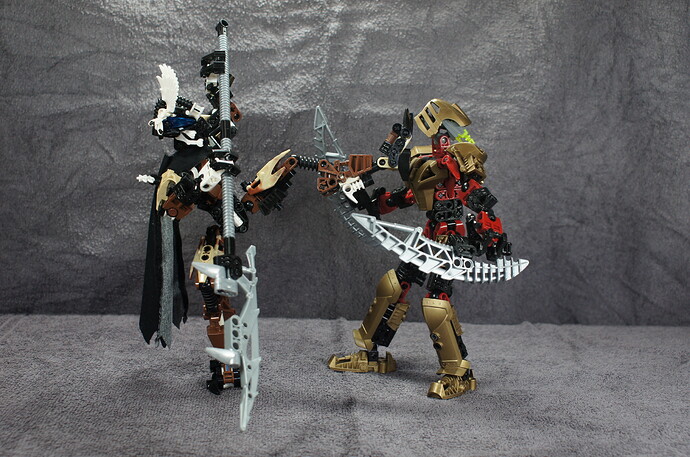 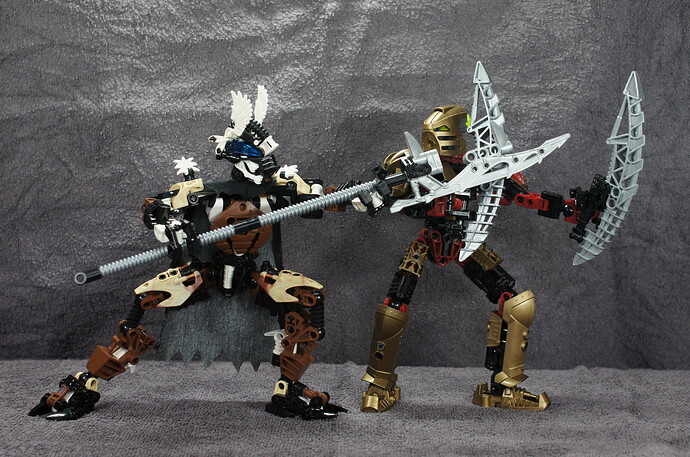 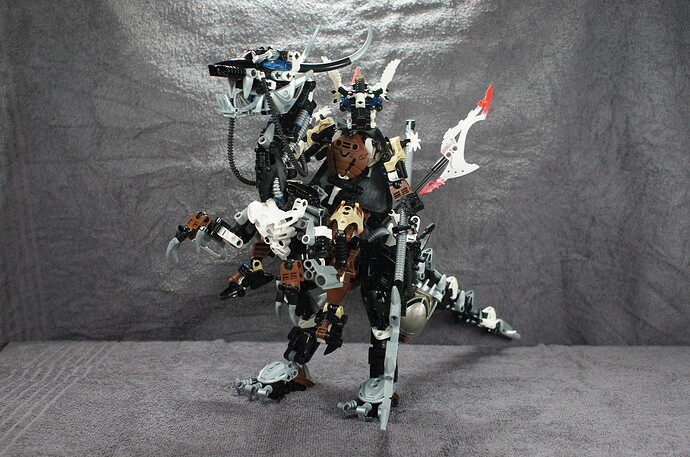 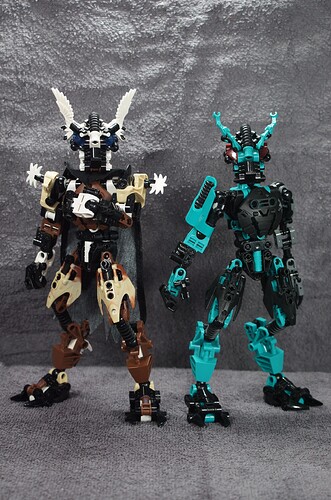 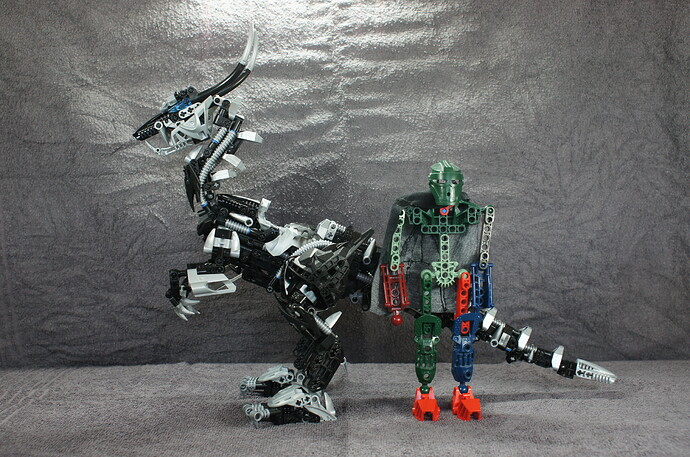 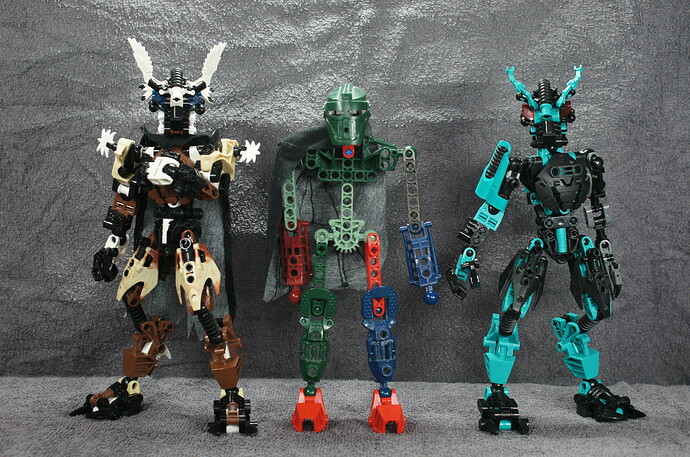 And of course I also put Lhikan on there: 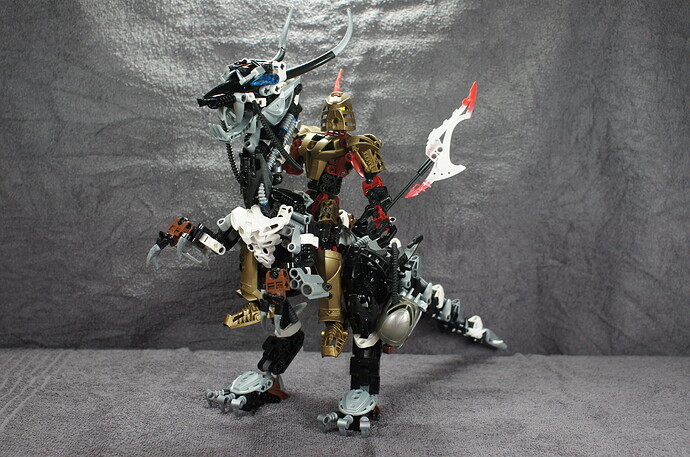 So, this is definitely the largest MOC I built to date and - wow was this difficult to balance. The legs don’t just need to hold up the entire raptor, but a rider on top of that. No chance without friction sockets here. This obviously also meant poseability had to be restricted, which might be most noticeable with the neck and tail of the raptor. They’re not completely static, but about as stiff as they look.

I built the whole thing in the first place because I wanted to try out my Lariska build in a different colour variation, and once one has a Desert Bomohku, a mount is kinda obligatory

I have to say that the natural colouring looks better to me than the attempt at matching colours to the rider, though. Likely because the raptor was built with only black and silver in mind, and thus recolours are difficult due to not having the parts in other colours/them not existing in other colours.

Kinda sad that I’ll have to take the raptor apart again - but I put way too many good parts in there, predominantly all those friction sockets and slizer feet, but also other small stuff… Also due to the size I have no place to put it. It’s already starting to gather dust.

But anyways, hope you enjoy and feel free to give feedback!

EDIT: Here’s a stud. io file for this. Stronius armor and those “feet that are no feet” parts on the front and back of the upper legs, but otherwise I hope this works. Feel free to say so if it doesn’t or you notice I forgot anything else. https://drive.google.com/file/d/1Tge_zW76JXi_XoLe4oXWjl6mtg-BZHL6/view?usp=sharing

Wow well I know whos getting my vote for Lariska!

If only this rahi existed in stores, I would’ve definitly bought one.
Really good build!

Can you show how to make theae

it looks like a roodaka raptor
in a good way though.
good job/10

I’m in the process of figuring out how to use stud. io to create a digital file.

Will make that available if I remember to.

How are you so good…?

This looks really fantastic. The raptor’s design is sweet, particularly the head–the Barraki jowl makes a great lower jaw! And your Lariska design looks quite cool recolored, too.

How well does stud.io work. And what can it do that normal lego can’t?

It’s basically the same, but with infinite amounts of pieces, all in a digital building landscape. It’s very useful for me because I do not have a large collection of parts.
Look up “studio bricklink” for more info.

Added a link to a stud. io file at the bottom of the initial post.

Is it possible to make it as instructions like how wombatcombat does it?

There seems to be some kind of instruction generator tool in stud. io. So you could probably create a comprehensive manual yourself if you want one.

Will not create one myself at this point, however, as right now I just use the file for storage, sorry.

And what can it do that normal lego can’t?

It’s free, is the big one. It doesn’t exactly “do” anything that can’t also be done with physical Lego, but you can use an unlimited amount of pieces, which would be expensive and time-consuming with physical bricks. You can use most pieces Lego has ever made, and in any colour you want. There are also plenty of third-party add-ons that give you even more parts and colours.

Illegal connections/clipping is also possible if you don’t care about real-world replicability.

That’s not to say that stud.io is perfect, though; it’s still missing quite a few rare/uncommon/little-used parts, and it can be tricky to do non-standard connection/building techniques.

But when the alternative is buying Lego in bulk off Bricklink, stud.io is great.

I really like the recolored Lariska and the beast, but I think that the head of the rider should have some brown or tan to continue the color scheme.

I don’t have acces to stud.I’m mainly due to the fact my computer is like a 7 year old mac desktop. Cant you ask wombat combat pictures how he makes his instructions then post the instructions to this here?

Unfortunately, I have no tan droid arms here. The chin is actually brown if you look closely, though

. I’m not sure if any of the other parts used in the head even exists in either brown or tan.