Even though I didn’t like the idea of running new canonization contests ten years after the ending of G1, here I am, for I told myself “if you think you’re not gonna be satisfied with the outcome, propose your own thing dude, and see what comes next”. And since I pondered ideas for a Helryx MOC for some years (big procrastinator over here), I decided to give it a shot.

So, Helryx, the first Toa and leader of the Order of Mata Nui.
She’s described as “indescribably ancient”, even though MUians don’t seem to age very quickly to say the least (Takua/Takanuva is undoubtedly older than her, but he’s still the dashing Toa of Light we all know).
She’s also described as “disturbingly frail” because “she’s been through a lot”. But surely Axonn or Brutaka went through a lot too, didn’t they? And if Helryx’s frail stature comes from wears and damages of thousand battles, why didn’t she repair herself when needed? Seems reasonable to me since she’s the leader of the most important and secretive organization in the MU, and certainly wouldn’t want to be vulnerable in any circumstances.

But I think many people didn’t pay enough attention to the quote’s last words: “she was indescribably ancient and disturbingly frail in appearance.” I think GregF’s description is more figurative than factual here.
With that in mind, I see Helryx as an old cyborg lady who could still break you in half if she had to. Just like the cliché elderly anime character who seems frail and wrinkly, but powerful enough to kick the protagonist’s butt and teach them a lesson.

I chose to use metal blue technic pieces to build her frame, in order to have that ancient and OG aesthetic. I tried to make her look frail but tough. Her custom torso is meant to be similar to a Mata one, and her body proportions are reminiscent of those of a Toa Metru frame. Her dark blue armor is composed of pieces not commonly seen on Toa, or used in unconventional ways (in order to fit her description).

The custom 3D-printed mask of psychometry (file available here) was designed by my best friend @meta.jack, and then modeled by Vahki6. Thank you both very much!
I wanted it to feel like the 2001 masks: simple (but not so much) shapes, tribal and raw look… The forehead pattern is directly inspired by the Ga-Metru symbol. Since Helryx helped in the construction of Metru Nui alongside the Matoran (with Ta-Metru and Ga-Metru being the two first districts ever created), I really liked the idea that maybe the Matoran remembered her mask design and reused it in their Metru symbols.
Vahki6 even told me about one of his friend who recognized the symbol of Ta-Metru in the forehead’s pattern: really satisfying for me haha.

Her “Toa Tools” were fun to make. The UDD shield is a nod to Destiny War, as in my mind I pictured a fierce Helryx on the battlefield, smashing enemies, and yelling “FOR MATA NUI, UNITY, DUTY, DESTINY” while waving her shield in the air. The spiked mace is a brutal, more organic-looking substitute to a flanged mace I have made in the past (which is not “legal” for this contest, ‘cause cut pieces).

If you have read this far, thank you and hope you enjoyed the thoughts behind my creative process 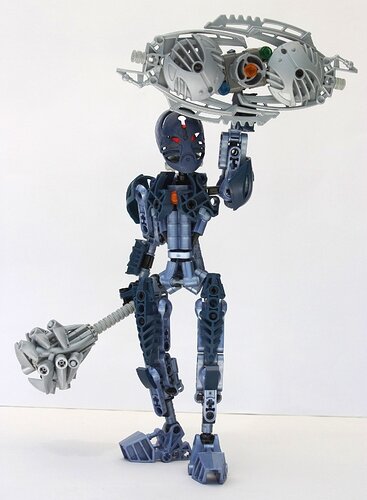 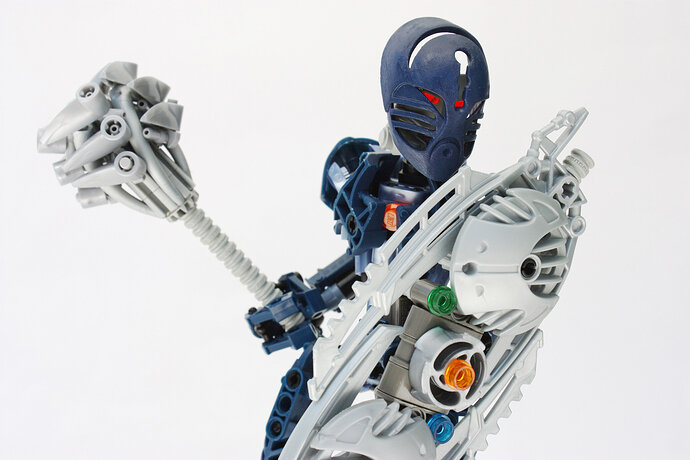 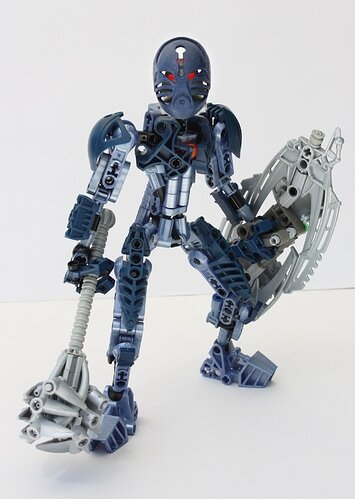 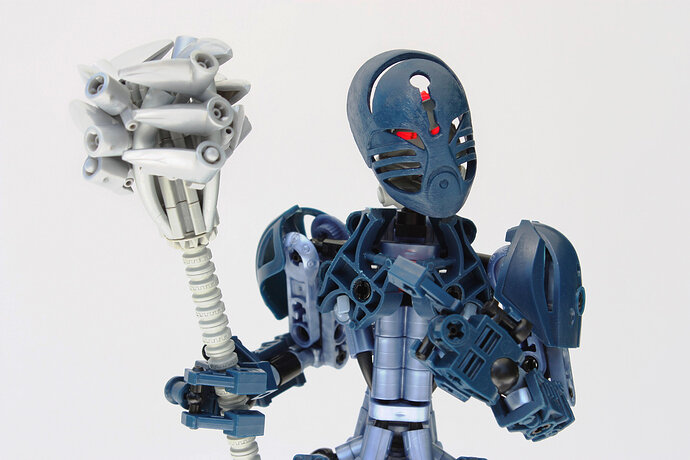 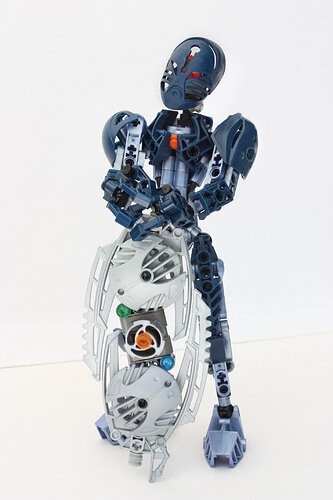 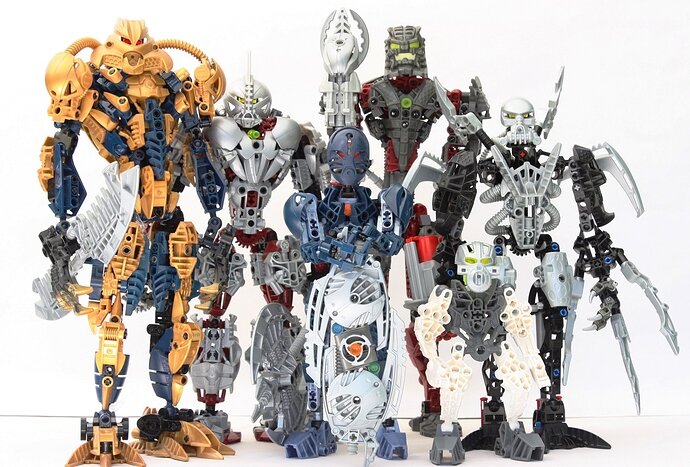 Turn around and size comparison: 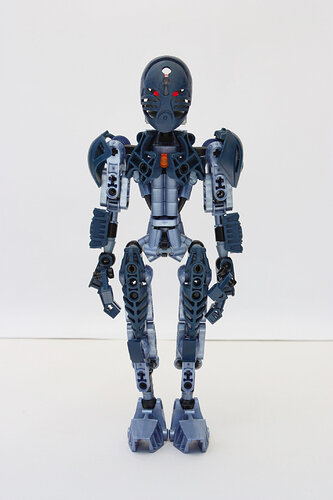 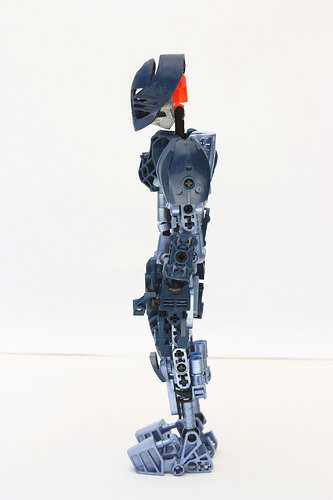 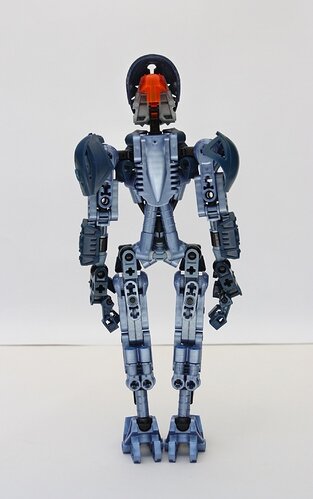 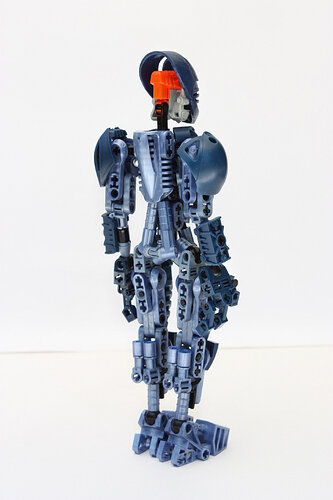 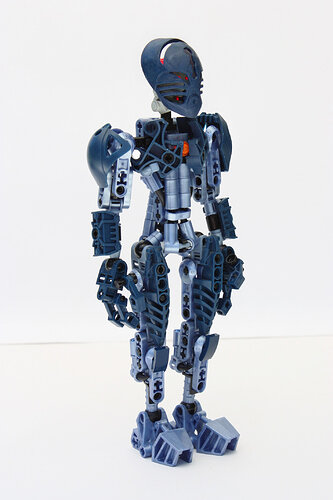 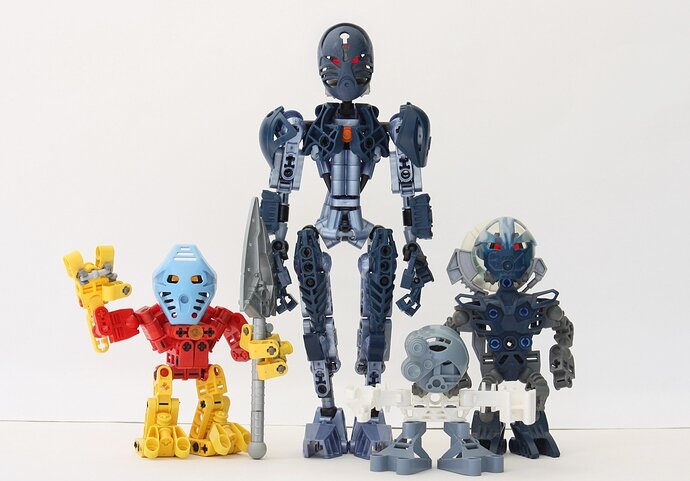 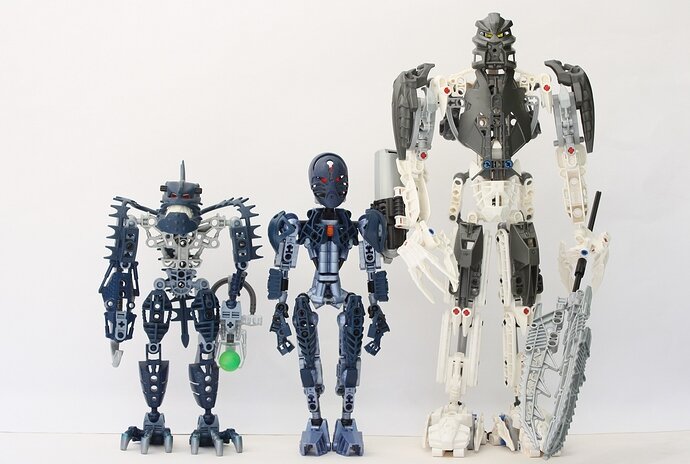 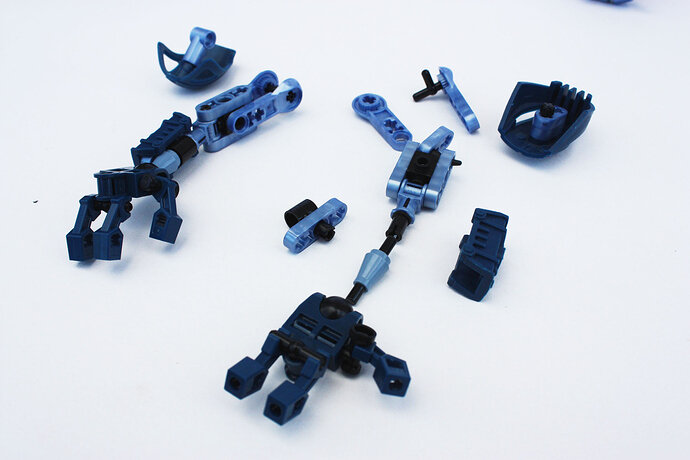 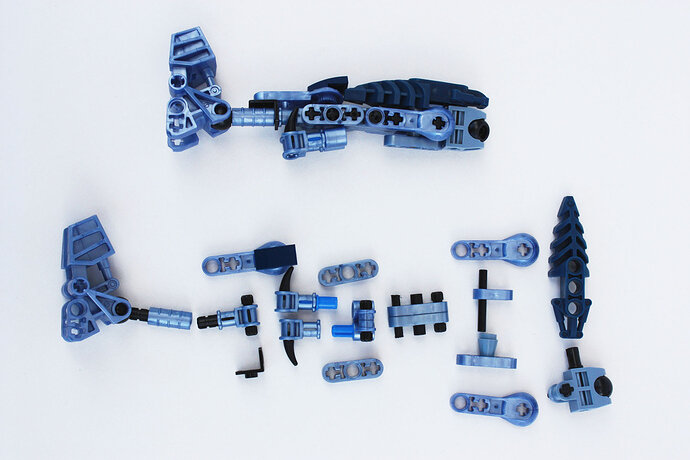 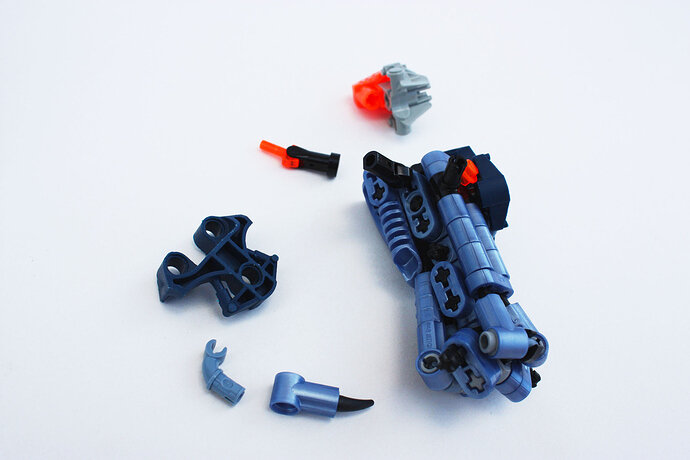 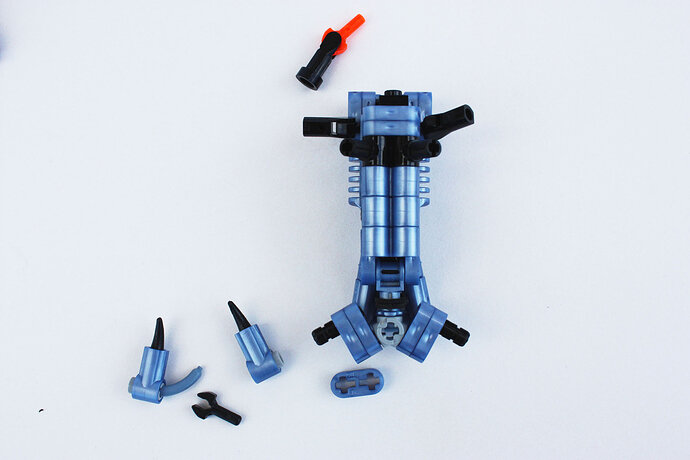 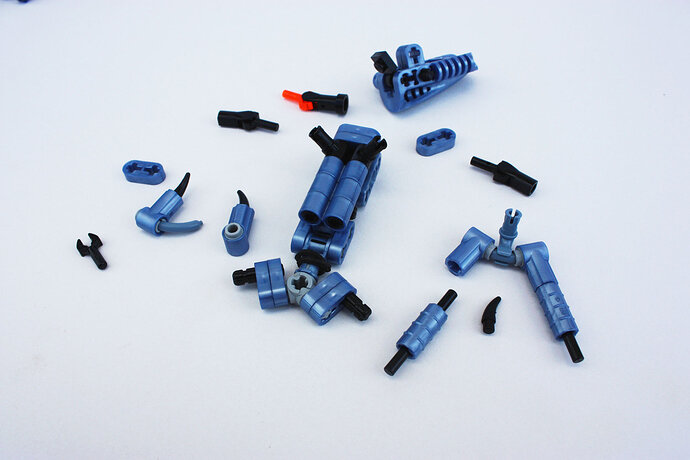 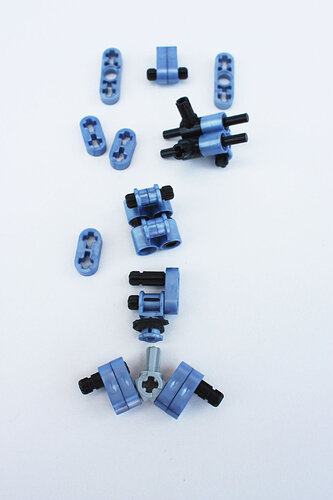 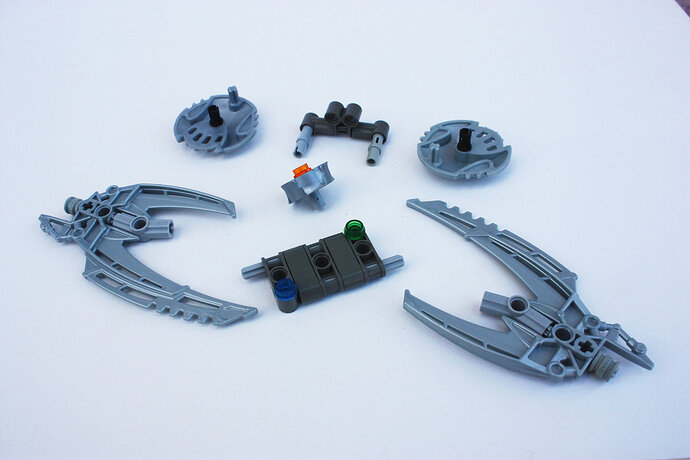 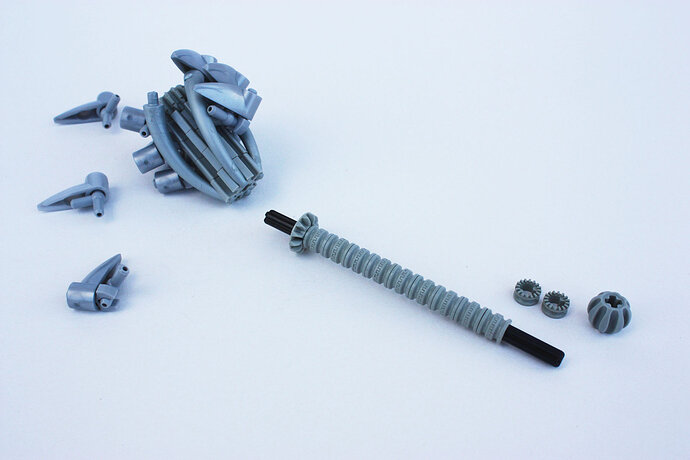 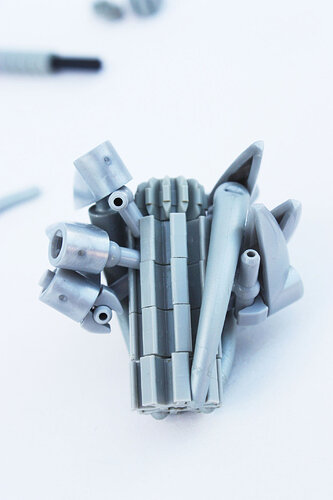 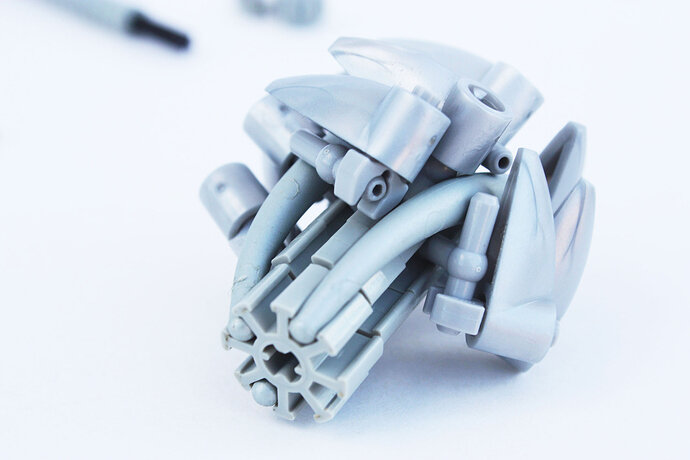 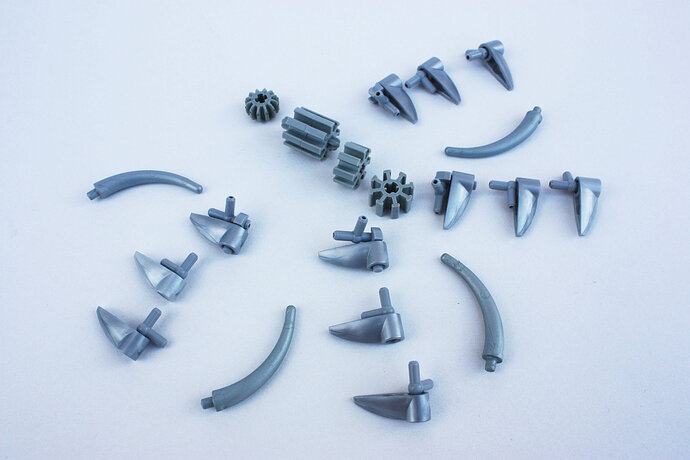 very cohesive and sleek and the whole build has a watery flow very befitting to the character, also the mace is incredible. also great revamps!

Nice use of the Metalic Blue color!

Oh i didn’t know we were showing our beefcake brutakas

That’s probably my favourite entry at this point. The proportions, the shaping are great! Oh, that colour scheme is indescribable!

I have just one nitpick with the figure. Is that one clip that connects her arm to the body nearly strong enough to hold the weight of her weapons?

Mh this might be the best one so far. Excellent job with that metallic blue

Wow. So polished and sleek! TBH tho it could easily be Tuyet seeing how menacing it is plus the shape similar to a Metru build.

Thank you all very much!

Oh i didn’t know we were showing our beefcake brutakas

I have just one nitpick with the figure. Is that one clip that connects her arm to the body nearly strong enough to hold the weight of her weapons?

In all honesty, it can be a problem when you’re posing it outside to take your pics, with all the gales and bugs attacks

But if you just want to display it in your room and you take your time to balance it properly, the MOC can hold its weapons in various positions. You have to make sure those pieces are fully connected together to ensure maximum friction tho’.

TBH tho it could easily be Tuyet seeing how menacing it is plus the shape similar to a Metru build.

You know what: I had the same thought when the MOC started to come together. But considering Helryx’s quick temper and seriousness, a sense of menace to her design suits her well imo.
In addition, I think the point of Tuyet as a character is precisely being evil while donning the mantle of Toa heroes, and looking like a good gal.
Helryx isn’t really any of that (and quite the opposite actually, as an anti-Tuyet): she doesn’t follow the Toa Code, she rules a secret organization which has done a lot of grim things, and always does whatever is necessary for the greater good.

My favourite MOC in this contest, i hope it wins. I dont like mace design tho. Its too massive.

Nobody seems to have mentioned it, but I love the subtle nod to Spherus Magna with the way you’ve coloured the accents on the shield. (a symbolism that Helryx herself probably wasn’t aware of, even - speaks to the fact that she may well have met the Great Beings herself!)

Since everybody is making fan-art of their favorite submissions, I drew your version. Really wonderful job! 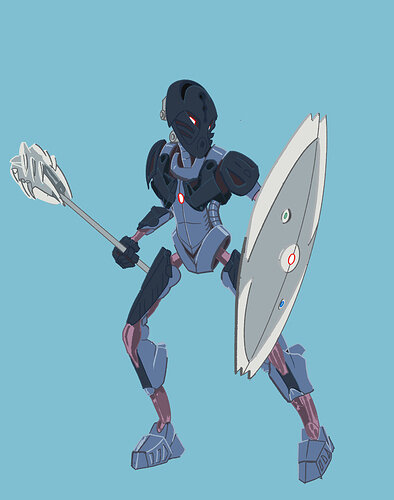 I’m waiting until the art contest to make my fan-art.

Although I would happily see the winner be this MoC - it’s really good.

If I have time, I’m going to making fan-art of all my favorite submissions in addition to the contest. They all deserve some love

Have some fanart. I hope you beat out Noodle Helryx 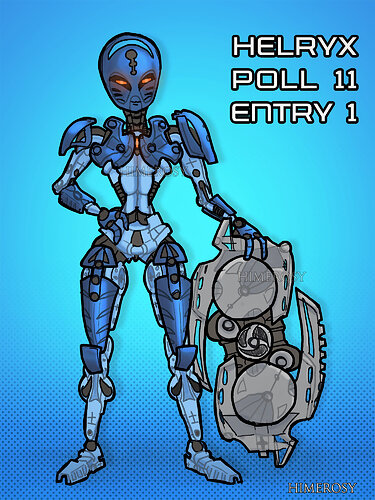 As I said on the other topic, if possible, I think this should be re-entered later as Tuyet. It’s literally almost exactly how I imagined her looking, right down to the mask.

I think your torso is one of the best canister sized torsos ever made. Somehow you were able to build an organic way to connect the upper legs. Most mocers I have seen when building it — it looks too stiff or square. Yours makes a triangle. The upper torso is really good. The color is excellent. What I don’t like is the assymetrical armor on the shoulders, but it is a minor quaim. We can agree on the shield though. I never connected the dots that Mata-Nui shield was one of the nebulas surrounding the three virtues. While the weapon, it looks protodermis-ish. Great job and better luck next time. Amazing work dare I say.

I am impressed that the mask actually looks as if it predates the toa mata’s great kanohi. I’m really digging the shoulders, but am blown away by the shield! Really nice. That shield is absolutely beautiful and extremely Bionicle imo:)