Lugar da Morte - discovered by Portuguese sailors well into the north atlantic ocean, with its closest land relative being the Azores, is an island similar in size and formation to the infamous Alcatraz Island, which houses a massive underground military compound joint-operated by US and EU forces. On the top of the island is the large Mansão Enganoso , a three-story mansion covering the grounds, along with separate buildings for housing, recreation, and medical aid. Without a doubt, this is one of the most professional resort locations in the northern hemisphere.

Especially if you’re one of the gifted.

The governments of Europe and the United States constructed this facility to seek out and weaponize those with peculiar abilities, individuals who possess - in layman’s terms - ‘Super Powers’. Leaving this island only occurs if a certain individual was mistakenly taken, and after the immediate evaluation deemed useless. Otherwise, you’re here for life. But don’t think about such things; not while there’s so much to do to help you grow and recover.

What will your goal be? Thrive on the island, participate in the future of superpowered individuals by acting in military operations across the globe, further the advancements of technology and society as well as the perceived rights of those present? Or turn against your gracious hosts, delve deeper into the underground portions of the mysterious island, possibly even escape?

Here is the signup sheet.

Name: Who do you think you are, anyway?
Gender: Prof. Oak noises
Powers: The unique abilities you’re capable of.
Power Explanation: Detail exactly how your power operates. It can have a bonkers origin, but try to at least partially ground it in scientific reasoning. The more homework done, the likelier to approve.
Appearance: What your character looks like.
Personality/Bio: Your character’s quirks and flaws, and how they got to where they are now.

The rp will begin when we have at least five players, and unlike some other RPs, I intend to keep signups open indefinitely. If you’re not quite sure about a concept, or you want to make your case about some secret details, shoot me a PM and we’ll talk.

All Boards rules apply. Be nice, don’t bypass the swear filter, and if you double post your life is automatically forfeit to the vengeful ghosts of moderators past.

I have the final say on whatever occurs here; I don’t intend to be callous about it, and I can definitely be reasoned with, but ultimately, you have to give me the right to be wrong about something if I consistently put my foot down. I don’t want to boot people for consistently challenging an issue, but I reserve the right to.

You can check out my topic Official RP How-To Topic if you’re unfamiliar with rp etiquette or if you’d like to make your writing more interesting.

Thinking of a character (and playing Mario Maker) right now

Name: Veronica Magellan, though her case file calls her ‘the Venus’ or ‘Venusian’.
Gender: Female
Powers: Veronica Magellan is capable of handling extreme heats, as well as lighting herself on fire without harming herself. She can manipulate flames and use them as projectiles this way. This power can be switched on and off, it’s like a normal bodily function for her.
In addition, she does not need oxygen to function, with her cellular capabilities allowing her to take any gas to allow her brain to live. This has made her immune to toxic materials.
Power Explanation: As a Venusian, Veronica can vibrate her cellular structure to generate extreme heats to the point where it can spark the oxygen in the air to come onto fire, or if she is near water, it acts like a micro-wave machine and causes the water to heat and boil. This is how she manipulates fire and turns herself on fire without burning herself, since the cellular structure is somehow used to being lit aflame. However, this requires her to have a fast metabolism to generate such energy, so she needs to eat high caloric foods. But hey, at least she keeps her figure. How hot can she generate her body? Around 850-900 degrees C, and if it gets any hotter that is when she starts getting injured.

As for the toxins, the same cellular changes allowed her to ensure the oxygen she breaths won’t be lit aflame, and has allowed her body to supplement it with other gases to keep the brain alive. This has drastically altered the way her body develops, however, and has given her skin a reddish tint which she covers up with make-up.
Appearance: A very beautiful, dark-haired Caucasian (though her skin is red-tinted) woman with blue eyes. Though most of the time her hair is short or just burned off because of her powers. She wears an all-red jumpsuit made from Kevlar so the workers do not have to be wounded by her body constantly generating heat. It is flame retardant, so it can handle her body being lit aflame just fine. 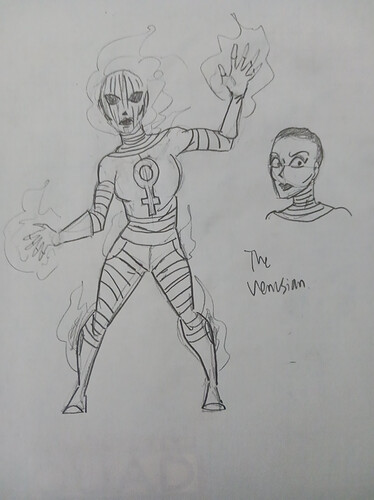 Personality/Bio: Veronica was a British astronaut working for the United States, hoping to use an advanced spaceship to collect rock samples from the planet Venus. When she went on her mission with other astronauts, a stray meteor collided with the ship as they were hovering in Venus’ thick atmosphere. The ship fell to the planet’s surface, killing the astronauts save Veronica.

As Veronica did quick repairs, the surface of the planet began to affect her. She began to burn alive, but did not seem to die. Due to the planet’s very similar gravity and shape, Veronica’s body only had to succumb to the pressure of the planet’s gases and heat. Yet something strange happened in direct contact, and instead of dying her body adapted. Eventually, she repaired the ship and escaped the planet, along with the rock samples from Venus.

However, when arriving back on earth, her body immediately lit to flames in contact with the earth’s atmosphere. She tried to learn to control it, but was detained quickly by special agents. The agency submerged her partially in water and questioned her extensively about what happened on the planet. They took the rock samples from here, and before she could say anything, she was sent to Lugar de Morte. The press stated she died on entry in the Earth’s atmosphere as part of the cover-up.

Now, at Lugar de Morte she remains, a shadow of her old self, though learning how to control her strange powers. One thing is for certain though: she wants to see her family and friends again, and to return to normal.

As for her personality, her transformation seems to have changed her. She was once very meek and calm, but has become more confident and often uses her looks to get her way. She is also, unsurprisingly, very intelligent and athletic thanks to her astronaut training.

I will break your knees into fifths

probably want be able to come up with a “good” character

Hey, you never know - your idea may fit perfectly. 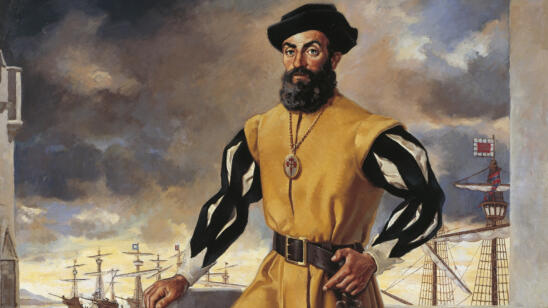 No relation I assume?

Heheh, the name was chosen on purpose. Magellan was also the name of a space probe that explored the planet Venus, and because Ferdinand Magellan was Portugese I thought it fit with the setting of the island.

Thinking of a character

hoping this will become actually real

hoping this will become doubly real

Is anyone else gonna make a character? I really wanna play this!

Name: Hal Rendon
Gender: Male
Powers: Hal is able to control specific areas of people and animal’s brains using electromagnetic waves, causing them to essentially become a living puppet. He can also create hallucinations, although these are weak and often only last for a few seconds.
Power Explanation: Hal can only take over someone’s brain if the target’s head is without protection. A helmet or a hat will block Hal from taking control of a target. The waves that Hal emits interact with parts of the target’s brain in certain ways that can cause the target to act accordingly. However, because Hal is inexperienced with the puppeteering of people, he can only control people into moving, as auditory functions are out of his control. To continue, he can also only control one target at a time
Appearance: Hal is pale-skinned with long dark hair that is usually unkempt, with a pair of hazel eyes and two very close, although thin, brows. He is of average height and he is fairly slim. Hal is usually seen wearing a white shirt and a dark grey scarf, no matter how cold it is.
Personality/Bio: Hal was the kind, middle-aged manager of a book store that he owned with his wife, Elizabeth. One day when he was stocking a new shipment of hardcover novels, a bookshelf fell over onto Hal. He survived that, but when he was being x-rayed, the protective gear was applied incorrectly, and the ray went straight to his body. However, instead of killing him, this gave him the power to control electromagnetic waves that could interact with the brains of others. Life went on as normal, although Hal started becoming more and more abrasive to others. He eventually stopped working at the bookstore, and while his wife was working during the day, he practiced using his powers on the rats and mice that lived in their apartment. After months of practice, Hal had become a shell of his former self. He regularly yelled at others and rarely ever left his home. One day when Elizabeth came home from work early, she saw Hal using his powers,
freaked out, and called the police department. The case eventually made it to the government , who then sent Hal to the island.

Hal was a good-natured, middle-aged man from Ohio. Now, he’s a manipulative, (ha) unforgiving monster who believes that everyone is his enemy and that he’s a god among mortals.

gosh I wish I could participate in this rp myself

Hal can only take over someone’s brain if the target’s head is almost completely bald.

I’m going to do what’s called a pro gamer move and say that Hal is simply too weak. Limiting the character’s ability based on the presence of hair is a bit silly, and I do appreciate you being overly cautious, but I think I would be fine with you removing the hair bit and clarifying he can only use his powers on one opponent at a time.

One day when he was stocking a new shipment of hardcover novels, a bookshelf fell over onto Hal.

I do appreciate you being overly cautious, but I think I would be fine with you removing the hair bit and clarifying he can only use his powers on one opponent at a time.

no it’s fine I’m gonna burn everyone’s hair off so he becomes useful.

If you don’t do it, I will burn into this rp’s reality, burn everyone’s hair and then transition fade away.

Revised Power Explanation: Hal can only take over someone’s brain if the target’s head is without protection. A helmet or a hat will block Hal from taking control of a target. The waves that Hal emits interact with parts of the target’s brain in certain ways that can cause the target to act accordingly. However, because Hal is inexperienced with the puppeteering of people, he can only control people into moving, as auditory functions are out of his control. To continue, he can also only control one target at a time.

Hal can only take over someone’s brain if the target’s head is without protection.

add that in and you’re good to go.